In 2010, Louis Vuitton introduced an innovative and playful way of reading the time with the Tambour Spin Time. Its secret: the hours are revealed by cubes rotating thanks to a unique and patented mechanism. Building on this iconic movement, which was developed and manufactured by La Fabrique du Temps, Louis Vuitton enriched the Spin Time collection in 2012 with a model dedicated to regattas: the Tambour Spin Time Regatta.

This LV156 movement used in this piece celebrates the longstanding association of Louis Vuitton with the sailing universe. Louis Vuitton has been an official partner of the America’s Cup since 1983 and is the official timekeeper of the 34th edition that takes place later this year in San Francisco. The patented movement offers two functions: chronograph and 5-minute regatta countdown timer (based on the revised America’s Cup rules), which is displayed on the dial by five rotating cubes. 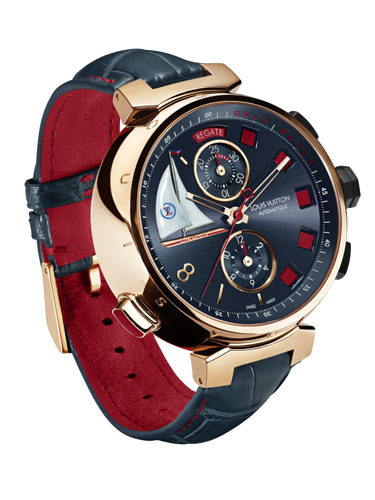 TAMBOUR SPIN TIME REGATTA FOR ONLY WATCH 2013 by Louis Vuitton

For this year’s Only Watch Auction, the fourth participation in the event by Louis Vuitton, the brand is offering a unique Tambour Spin time Regatta watch, designed in collaboration with Paul Pettavino and the Louis Vuitton team, as for the past 3 editions.

For this 2013 edition Paul has decided to change from the usual orange colour into a blue and red colour watch. Every detail has been chosen or designed by Paul, such as the gold boat hand engraved and covered with enamel, or the Louis Vuitton painted on the Damier canvas trunk that comes with the watch.