The most complicated watch ever made, Reference 57260, is a double-dial horological masterwork of almost unimaginable technical innovation. Conceived over eight years by three of the company’s Master Watchmakers, it features no less than 57 complications, several of which are entirely novel.

In commemorating its 260 years in existence, Vacheron Constantin - the oldest watch manufacturer in the world – made an announcement that kept the watch world on its toes. Until now, that is.

A few months ago, the brand announced that it will unveil a special pocket watch to mark the occasion, announced as “the most complicated watch ever made”. Expectations were high indeed. And those expectations were fuelled by the masterful release of information to the press. 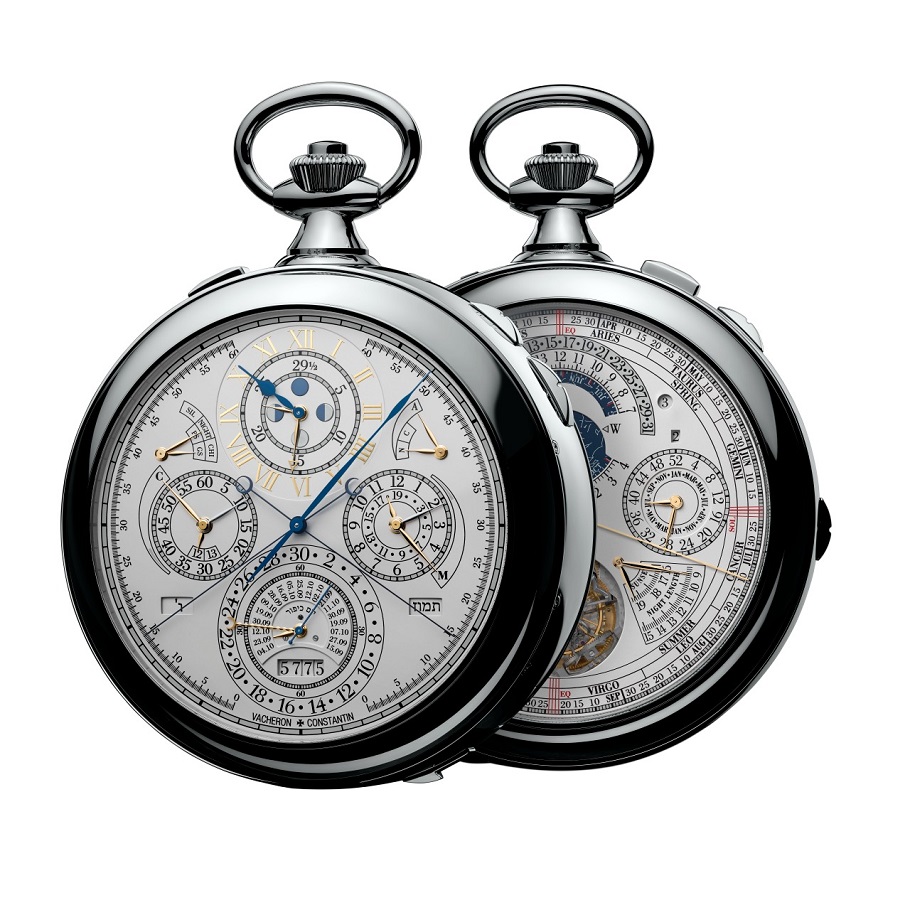 No more than a dozen people around the world were chosen to receive very specific information about the timepiece; a fragment that would indicate one of the numerous complications that the most complicated watch was to have. Europa Star’s very own editor-in-chief, Pierre Maillard, was one of the select few to receive his piece of the puzzle: a perpetual retrograde accompanied by a mobile celestial sky chart.

Now, the disparate pieces have been assembled, and the puzzle has been solved. Vacheron Constantin has finally revealed, in full, its master work. And it’s quite obvious that the company is even more masterful at watchmaking than it is at inciting interest from the press.

As its name suggest, the Reference 57260 has 57 complications – the 260 denotes the year of the anniversary. Among the new complications incorporated in the pocket watch are multiple calendars and a double retrograde rattrapante chronograph, which have never been seen in the watchmaking world to date. But Vacheron Constantin did not rest on its laurels. Even the more familiar existing complications have been modified, reinterpreted and redesigned, all of which are housed in a solid 18-carat white gold case that represents a harmonious whole. In all, it signifies the creation of an entirely new type of movement – and an entirely new kind of timepiece, for that matter - the likes of which have not been seen before.

On each side of the watch we also find a dial made of solid silver. The rotating discs for the displays are made of aluminum, reducing weight and by extension the energy required to move. One of the dials is derived from precision regulator clocks, displaying the hours, minutes and seconds on separate chapter rings as if it were to be used in an observatory or a laboratory. It also displays some of the entirely new functions developed by the master watchmakers at Vacheron Constantin.

The Reference 57260’s Hebraic perpetual calendar is one of the greatest contributions to mechanical watchmaking in recent times. The complexity lies in the fact that the long-term changing cycles of the Hebraic calendar - its difference from the Gregorian calendar being that it works on a 19-year Metonic cycle – has made such a complication impossible until now. Highly complicated mathematical calculations combining both the lunar months and solar year were transcribed into not only an operational mechanism but a display that is elegant, logical and easy to read. This achievement cannot be overstated as an example of contemporary watchmaking genius. 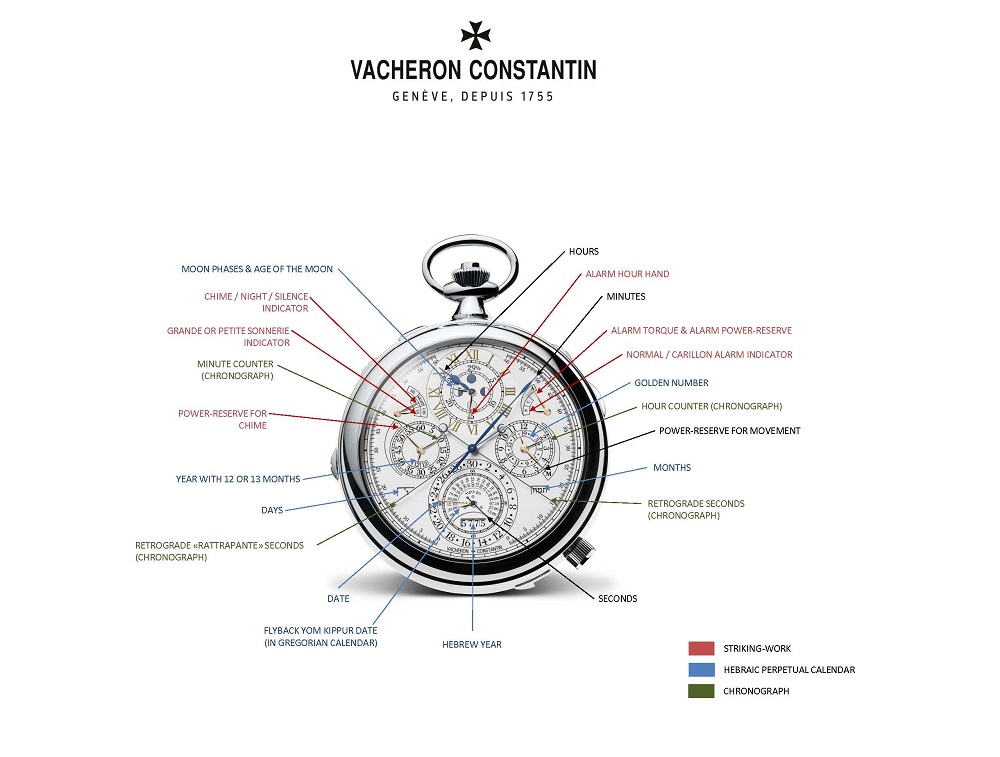 The Metonic cycle (also called Golden Number) is displayed as a sector at 3 o’clock concentric with the chronograph hour register. The sacred date of Yom Kippur indicated in the Gregorian calendar each year is represented by the corresponding retrograde hand at 6 o’clock, which returns to its starting point every 19 years, at which time the sector is replaced for another for each of the 19 year cycles.

Additionally, as part of the Vacheron Constantin moon phase system – which requires correction only once every 1027 years - within the centre of the hour chapter ring can be found four representations of the moon phases. It also has a hand indicating the age of the moon within its 29.5305882 day cycle.

Another completely new innovation is the visually dramatic retrograde rattrapante chronograph with double retrograde action, the first of its kind in history. This chronograph is read in the manner of normal chronograph but it has a unique feature: whilst both hands still work in unison and from the same axis, unlike all other split-seconds chronographs the two hands never actually meet but operate on two separate scales on opposing sides of the dial. In effect, what the watchmakers have invented is a “detached” split-­seconds chronograph, developed and made entirely in-house at Vacheron Constantin. Made specifically for this watch, it is not only a highly visual complication but mechanically ingenious as well.

Unsurprisingly highly sophisticated and unique chiming elements have also been incorporated in this watch. Just above the chronograph registers, sectors can be seen on the dial with corresponding hands which indicate different modes: chiming, alarm striking and alarm power ­reserve indicator.

The watch offers three different chiming modes. One chimes automatically at each passing quarter hour, with five hammers striking five finely tuned steel gongs to the tune of “Big Ben” at the Palace of Westminster in London. A second mode offers the option of “night silence”, which automatically disables chiming from 22h to 8h. The last mode offers complete silence, when chiming is not desired. 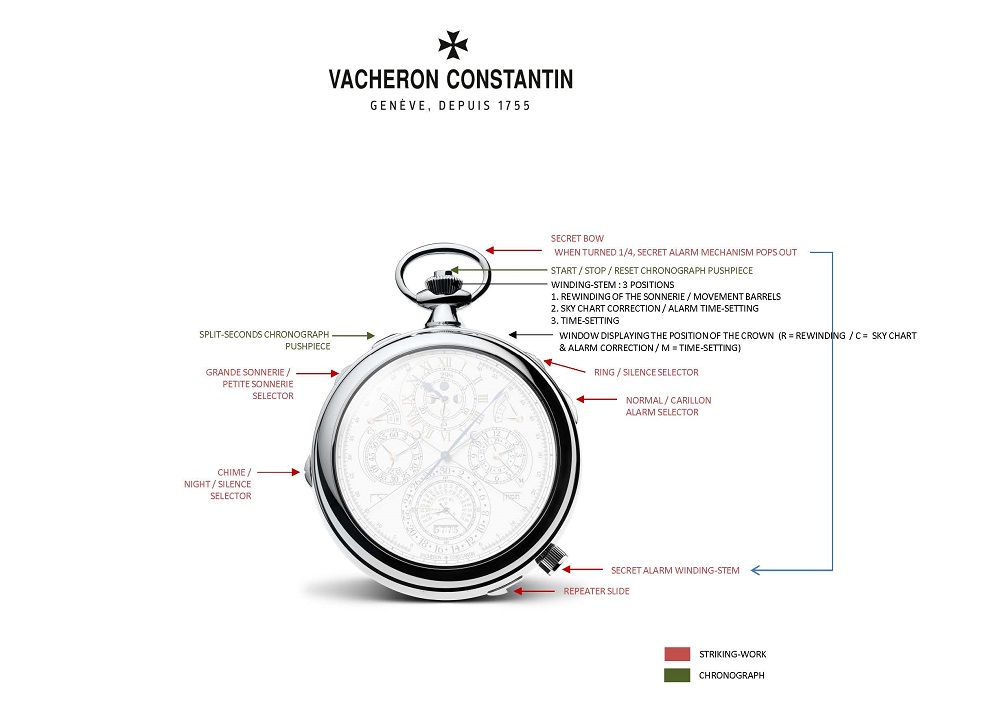 On top of that, there are two additional options to choose from. The Grande sonnerie entails striking the hours and the quarters at every passing quarter. Alternatively the Petite sonnerie offers the option of striking the full hours at the hour but only a quarter-strike without hours on the quarters.

In addition to the elaborate chiming mechanism, this model houses an integrally connected alarm system with separate power-reserve indication. The main feature of this complication is that it allows a choice between either a traditional alarm or an additional differently-tuned alarm of a single hammer strike or the Westminster carillon in either Grande or Petite sonnerie mode.

Several unique and major systems developed especially for this watch can be found on the second dial. This includes the astronomical indications, and a blue star chart in the upper half of the dial representing the night sky and the star constellations - visible from the user’s home city - with the months appearing around the edge. Subsidiary dials for the days of the week and the months flank the star dial and the aperture, and around the edge of the dial there are three astronomic scales. 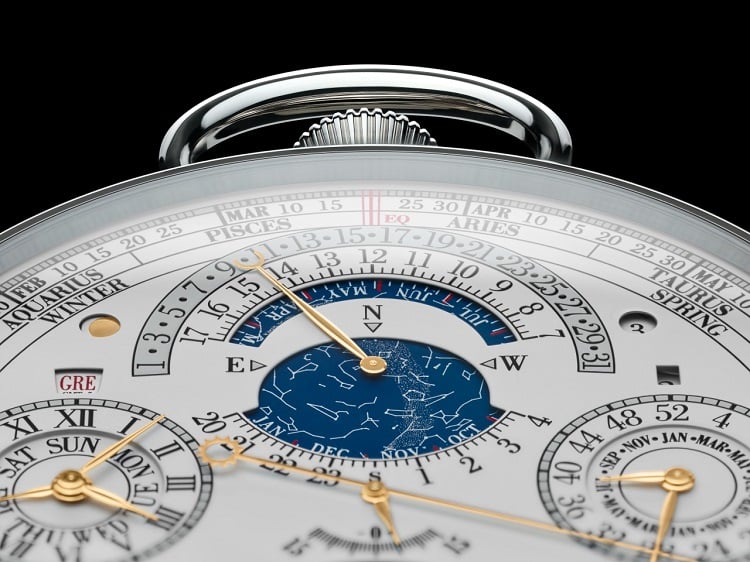 Around the outer perimeter of the watch is the scale for the retrograde date of the perpetual calendar. The outermost scale is for the months of the year and their respective number of days, while a concentric scale for the year divided into Zodiac sign periods additionally indicates the dates of the Vernal and Autumnal Equinoxes and the summer and winter solstices. The inter-related four seasons are displayed on a further inner concentric ring. The sector above the tourbillion aperture indicates Equation of Time showing the discrepancy between true solar time and standard meantime, which fluctuates during the year.

Another watchmaking first is the 12-hour second time zone dial with a separate day and night indicator window located in the 10 o’clock position: the second time zone is used in conjunction with the digitally displayed world-time function which gives a choice of 24 cities and countries and their respective time deviations from Greenwich Meantime. 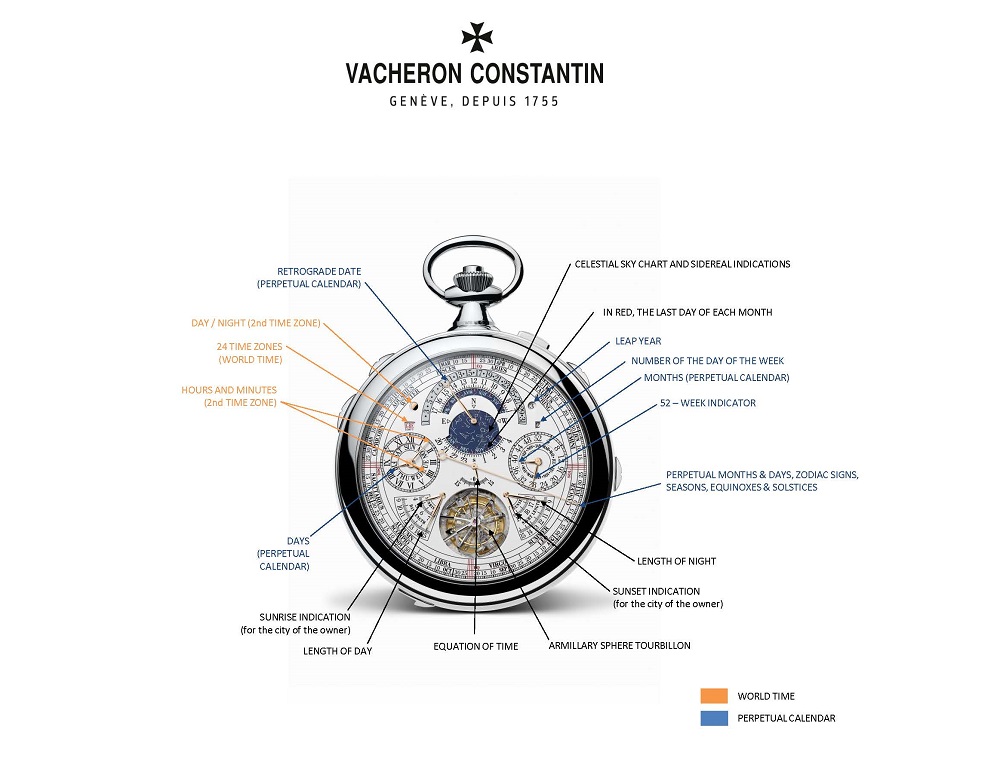 The watchmakers at Vacheron Constantin have also created an elegant mechanism that displays a three-dimensional and constantly rotating sphere moving simultaneously in three directions. This mesmerising Armillary tourbillon cage containing the watch’s escapement is visible through the aperture beneath the sky chart. It was named “armillary” because visually it is reminiscent of the circles and rings of the scientific instrument known as the armillary sphere. The armillary sphere tourbillon is a feat of high-precision watchmaking, its purpose to minimize the effects of gravity on the balance wheel, hairspring and pallet fork of the escapement. 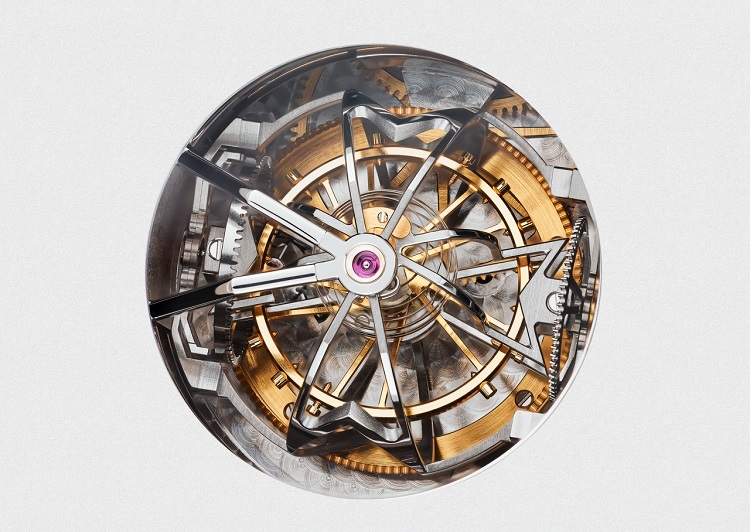 The above are mere highlights of the functions and complications of this special timepiece; an entire volume would be required to cover all of its intricacies and to do them justice. As we said at the outset of this article: Vacheron Constantin’s Reference 57260, it’s complicated.