Melchior, and the child within [Video]


Melchior, and the child within [Video]

In another successful joint venture, MB&F and L’Epée 1839 have created a new robot-cum-table clock that captures perfectly the two brands’ imagination, creativity and design acumen. Appealing to the eternal children among us, Melchior will bring joy to those at the 2015 Only Watch charity auction.

MB&F and L’Epée 1839 are at it again. The horological concept lab celebrates its 10th anniversary this year, marking a decade of creating critically acclaimed horological machines. But this year MB&F seems to be in overdrive, both with its creativity and its production. It has once more partnered with another player at the forefront of watch and clock making, L’Epée, which is the only specialised manufacture in Switzerland dedicated to making high-end clocks. 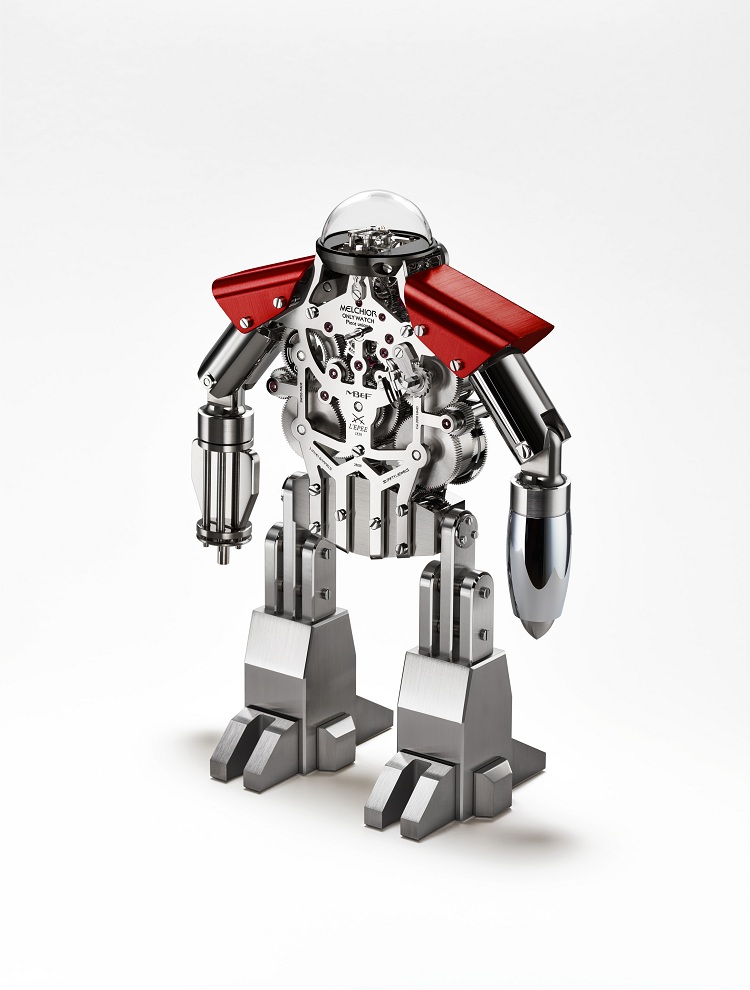 Their joint venture is called Melchior, which will feature at the biennial Only Watch charity auction of unique timepieces, under the High Patronage of Prince Albert II of Monaco, to raise money for research on Duchenne Muscular Dystrophy (DMD). Part toy and part mechanical timepiece, the Melchior is everything we have come to expect from MB&F and L’Epée.

MB&F’s motto declares that “A creative adult is a child who survived.” The Melchior Only Watch epitomises that expression perfectly. Company founder Maximilian Büsser explains the inspiration behind the robot-cum-table clock, originating from his childhood imagination”

“A long time ago in a galaxy far, far away, man’s best friend was his robot. As a 10-year-old fan of Star Wars, I knew Luke Skywalker could never have prevailed had it not been for droids like R2-D2 – a loyal, resourceful, and brave robot who was always saving his friends. As an only child, I imagined having my own robot companion. Melchior makes that childhood fantasy a reality.”

A true robot companion is one you can play with, and Melchior does not disappoint. Clothed in palladium-plated brass and steel, with bright red shoulder pads, the robot’s personality is further highlighted by an animated brain and blinking eyes, which gives it a playful feel. But Melchior means business, too. He also has a small arsenal at his disposal, just in case any bad guys turn up and make trouble! 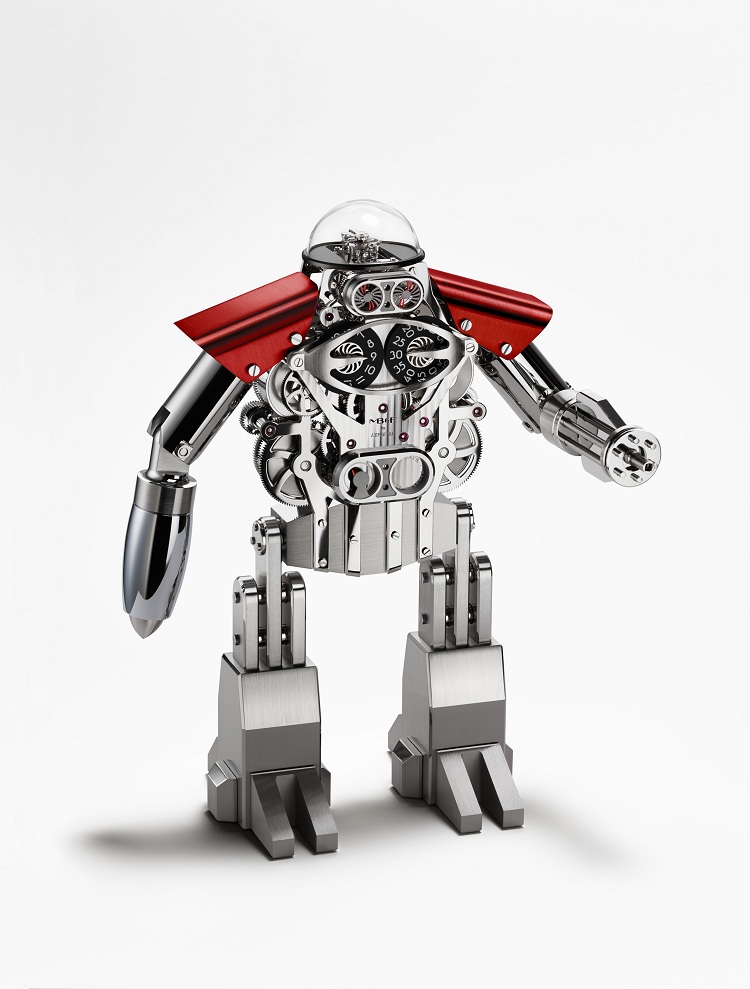 While Melchior is certainly playful, he is not simply a toy. He is also a high-end table clock, featuring aspects usually reserved for luxury timepieces: jumping hours, sweeping minutes, double retrograde seconds, and an impressive 40-day power reserve drawing from five mainspring barrels.

Of the 480 components - each one machined and finished at L’Epée’s Swiss atelier – that make up Melchior, an impressive 334 components make up the highly visible movement. To pull it off, L’Epée developed a completely new skeletonised main plate in palladium-plated brass, which sandwiches the movement mechanism. Hours and minutes are displayed via discs on Melchior’s chest, while a dial on his abdomen indicates the state of the power reserve. 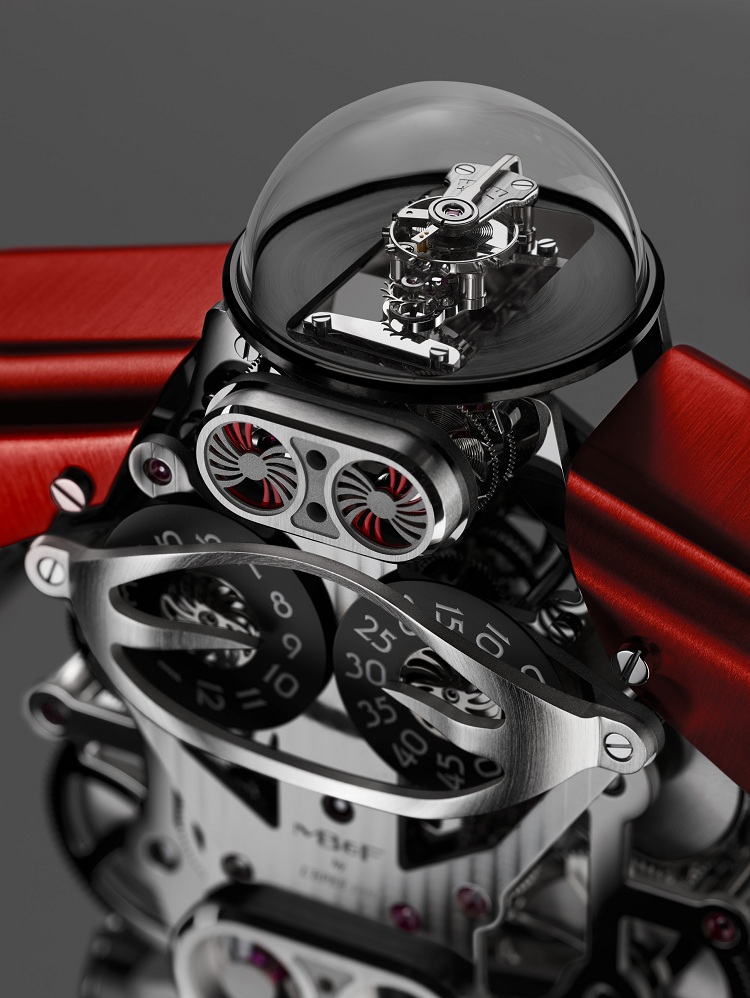 Melchior’s brain, which is actually the movement’s precision regulator, provides further animation as it gently pulsates under the polished glass dome on his head. And that brain of his is kept safe through an Incabloc shock protection system, which is generally only seen in wristwatches. In fact, Melchior’s exclusive table clock movement features the same type of mechanisms as a wristwatch, but only in larger dimensions. They include: a gear train, spring barrel (five in series), balance wheel, escape wheel, and anchor.

“It’s not simply a case of double the size of the components, double the time it takes to finish them. The complexity increases exponentially.”

And in case you were wondering why the name ‘Melchior’ for a robot, rather than the common monikers sounding like acronyms or reference numbers (e.g. C-3PO, R2D2), the answer is in family history. It was actually Max Büsser that christen this robot, as he explains:

“In the Büsser family, for over five centuries from the 1400s onwards, every eldest Büsser son was either called Melchior or Balthazar. It alternated. My grandfather was called Melchior and hated it, so he had everybody call him Max, which is how I became a Max. My grandfather hated the Melchior-Balthazar thing so much that he put an end to this 500-year-old tradition by calling my father Mario. Now, a century later, I happen to love the name Melchior!”

Its appeal not limited only to watch lovers, Melchior is a creation that can bring our out the inner child in anyone. Part toy and part high-end table clock, Melchior is perhaps best thought of as a kinetic sculpture, which reminds us of our own eternal child within.