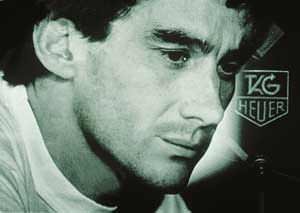 A double tribute to Ayrton Senna by TAG Heuer

It is ten years since Ayrton Senna won his third Formula 1 world championship title. TAG Heuer enjoyed a special relationship with this brilliant driver. Today, in a double tribute to one of the greatest legends in motor racing history, TAG Heuer is bringing its support to the foundation that carries Ayrton Senna's name, and has dedicated a unique chronograph to his memory.

A commitment to the Ayrton Senna Foundation
In 1988, Ayrton Senna joined the McLaren team and became TAG Heuer's ambassador. Until his tragic death in May 1994, he was more than a partner for the company: he was a friend. Over the years, he helped to build the company's renown around the globe. He also played an active role in the development of products by submitting them to the most stringent tests: top-level competition in extreme conditions.

In celebration of this special relationship, TAG Heuer has decided to support the Ayrton Senna Foundation. A not-for-profit organisation, the Foundation uses the Senna trademark and the image of the champion, donated by his family, to set up programs to help underprivileged youth - one of the ambitions expressed by Senna.

More than 300,000 children and adolescents have already benefited from educational programs.
A new and unique chronograph
The Link Senna chronograph symbolises this friendship and the values shared with the company. A short time before his death, Senna said: “Competing at the highest level for several years has had a considerable influence on my personality. It has made me strive for excellence, professionalism and perfection. If you want to be successful, you must be totally committed and always give your very best.”
Available in a limited edition of 1,991 pieces, the number symbolising the year in which Senna won his third world championship title, the Link Senna proudly displays the champion's mark on its dial. This famous double “S” was inspired by the sweeping curves of Interlagos, the race track of Sao Paulo, his native city, and the first letter of his surname.

With its two oversized counters, the chronograph function is easy to read. The sapphire glass is treated with a double anti-reflection coating and this unique watch features a high-precision automatic movement, illustrating the watch-making know-how of TAG Heuer. Three dates engraved on the bottom of the case - 1988, 1990, 1991 - commemorate Ayrton's three world crowns.

Through its support for the Foundation and the Link Senna chronograph, TAG Heuer is proud to honour the memory of an incomparable driver, and to play a role in making his most cherished dreams a reality.