EKATERINA SOTNIKOVA - The collector who came FROM RUSSIA


EKATERINA SOTNIKOVA - The collector who came FROM RUSSIA

Ekaterina Sotnikova has opened a store in Paris that sells watches made by indepdendent watchmakers. Originality and prestige.

“There is a lot of prejudice about women from the East.” If one of them is Slavic beauty then Ekaterina Sotnikova, who looks like she has had to deal with them, does not dispel them all. This young woman with big green eyes and chestnut hair has just opened, in Paris, a stone’s throw from the Champs-Elysées, a prestige watch store, Ekso Watches Gallery. It’s a kind of cosy lounge with champagne and dark-brown hues that houses eight display cases with creations from independent watchmakers of various nationalities, based in Switzerland or their own countries, among them Speake-Marin, Vianney Halter, Ludovic Ballouard, Kari Voutilainen, Bovet, Stefan Kudoke and Grönefeld.

Names and brands that may not mean much to the mainstream consumer but speak volumes to the happy few. Located in an office block, the gallery is open by appointment and accessible by a key-operated lift. When confronted with the marvels on display, one feels both small and important at the same time. Because everything is for sale. Not the place itself but the goods. You need a thick wallet. 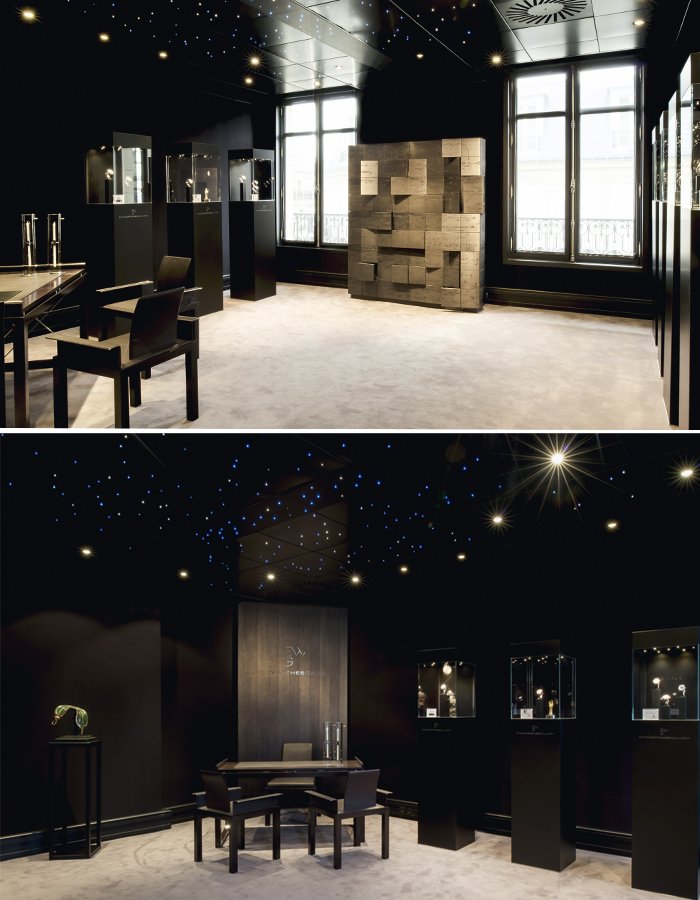 Ekaterina Sotnikova is a forceful woman. Despite her apparent fragility, she has plenty of toughness. And 18 years of passionate interest in watches, she says, beautiful watches, it goes without saying. Her life has taken some interesting twists and turns. She was born in Latvia under the USSR and grew up in St. Petersburg. As a teenager, she was a top-level gymnast, but an injury sustained at the age of 16 put an end to her career in sport. Never mind, she earned a doctorate in economics. “That’s what was prestigious at the time,” she says without affectation. “When I finished my studies, I had to find work in Russia.” But this prospect hardly appealed to her. And, furthermore, “my private life wasn’t exactly brilliant either”. So she decided to emigrate. But where to?To Paris, of course. “I already had a love of Paris”. Friends in Russia who were well connected with the political family of president Putin put her in touch with the UMP (Union pour le Mouvement Populaire, or Union for the Popular Movement), which could be considered as the French “brother party”. So she gets a job at the UMP as “the person responsible for relations with elected officials in the East”.“The first three years in Paris were not easy for me. But I decided to stick it out. Going back to Russia would have meant that I hadn’t succeeded in France.” So she stuck it out, met at the UMP the person who would later become her husband (she doesn’t disclose his name), a lawyer whose study today accommodates the Ekso Watches Gallery. “My husband could see that I liked watches. But what to do? Open a shop? No. I focused on the indepdendent watchmakers. I was passionate about the subject but didn’t know anything about it on a technical level. I did a training course at the Fondation de la Haute Horlogerie in Geneva. The watch I assembled didn’t work,” she says in perfect French enveloped in a delicious Russian accent.Her first “Basel” was three years ago, to see and to buy based on feeling. “I made fewer errors in my choices in the second year,” she admits. Her husband, who she has “contaminated” with her love of watches, accompanied her that time. Today she manages a collection of thirty watches from a restricted group of manufacturers, “artists” who she nurtures, cherishes and pushes if necessary. “Some of them don’t know how to sell themselves,” she notes benevolently. She knows all about them, visits them frequently, adds her personal touch to the design of models and – showing the economist in her – signed an agreement with them as an exclusive retailer.She says of the model “Serpent Calendar” produced by Englishman Peter Speake-Marin that she is holding in her gloved hands, beaming like a child, “a snake-like hand that indicates the date; hand-machined thick white-gold case; enamel dial.” She gushes over the “Antiqua” by Frenchman Vianney Halter, created in 1998, a strange creation with four dials in the shape of portholes, “2,000 hours of work”. “This was the talk of Basel at the time,” she notes.Some of these models on sale at the gallery are worth hundreds of thousands of euros. A big – private – investment for Ekaterina Sotnikova, who is looking to make her venture profitable. She has given herself five years to succeed.