Officially, at Tudor, they don’t use the word “vintage”, preferring the term “retro-chic”. Old models are not “reissued”, they are “reinterpreted”. It was in 2010 that Tudor first set out to “reinterpret” its own history, and the approach has proved to be a winning formula. We attempt to deconstruct it.

Officially, at Tudor, they don’t use the word “vintage”, preferring the term “retro-chic”. Old models are not “reissued”, they are “reinterpreted”. It was in 2010 that Tudor first set out to “reinterpret” its own history, and the approach has proved to be a winning formula. We attempt to deconstruct it.

Officially, at Tudor, they don’t use the word “vintage”, preferring the term “retro-chic”. Old models are not “reissued”, they are “reinterpreted”. It was in 2010 that Tudor first set out to “reinterpret” its own history, and the approach has proved to be a winning formula. We attempt to deconstruct it. 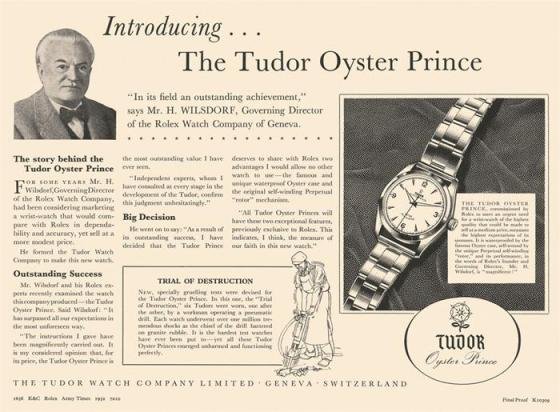 Hans Wilsdorf created Tudor in 1926 with the aim of, in his own words, producing “a watch more modestly priced than a Rolex but with the same standards of reliability.” After enjoying the limelight for a few years, Tudor was gradually eclipsed by Rolex and almost disappeared off the radar altogether. But in a few short years Tudor has burst back onto centre stage, largely through the ingenious strategy of “reinterpreting” its most iconic historic models. Although Tudor’s current collection is not limited to the Heritage line, which is the home of its reinterpreted vintage models, the Heritage watches nevertheless clearly played a prominent role in reviving the company’s fortunes, and were quickly rewarded with a Grand Prix d’Horlogerie de Genève in 2013, in the “Revival” category, appropriately enough.

The revival began in 2010, when a new team brought in the Tudor Heritage Chrono, directly inspired by a piece from 1970 which had never been distributed or sold. The Reference 7033 had remained a prototype in three versions, one of which featured a rotating bezel that could be used for GMT or dual time, and a Valjoux 7734 movement. The company’s designers rescued the watch from the back of the drawer where it had languished for 40 years, and set to work to reproduce its twotone dial and twin off-centred registers at 3 and 9 o’clock, with their distinctive trapezoidal shape redolent of the early 70s. They got rid of the characteristic Rolex cyclops – a way, perhaps, of cutting the apron strings – and made a series of formal and ergonomic refinements to the case, the lugs, crown protection and pushers. In addition to rethinking the metal bracelet, they also added a high-quality hand-crafted NATO-style textile strap. This exclusive strap was a surprise hit, and the idea was subsequently taken up by countless brands, vintage specialists and retailers, to the point where NATO straps are now ubiquitous.

On its launch in 2010 the Tudor Heritage Chrono made a profound impression on the rapidly expanding tribe of vintage watch lovers, who were led on a voyage of discovery of the myriad brands that, unlike the revered Patek Philippes and Rolexes, had hitherto remained comparative strangers to the auction block. In fact, collectors had already begun to take an interest in Rolex’s sports watches back in the early 2000s, leading to sometimes vertiginous price hikes. The groundwork had been laid, so when Tudor emerged from the woodwork the prices for its older models, which until then had been largely ignored, duly went through the roof. And they continue to climb, if the mind-boggling price recently set by a Tudor dive watch is anything to go by: CHF 18,000. 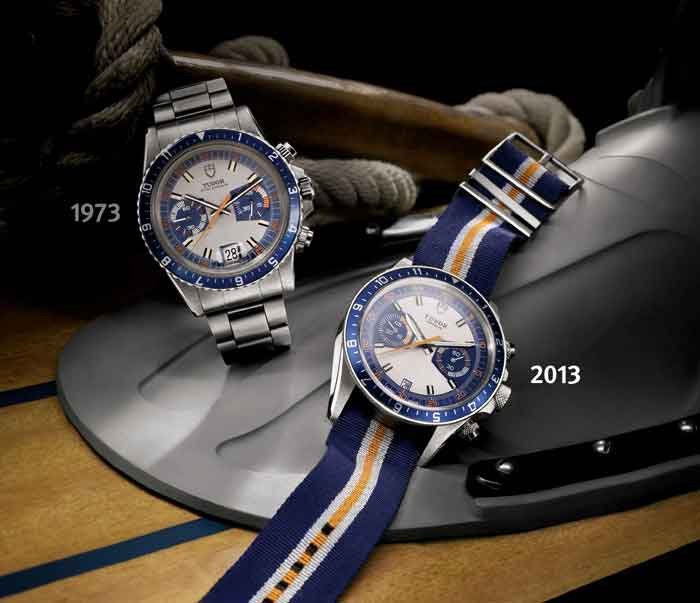 At that point, convinced that it was jacked into the zeitgeist, Tudor set about mining the rich seam it had uncovered, and made the decision to release one new Heritage every year. In 2011, the Advisor was dusted off. The original Advisor, the only alarm watch produced by the Tudor-Rolex duopoly, dates back to 1957, when its diameter was a diminutive 34 mm. The designers added 8 mm, bringing the diameter up to 42 mm, gave it a titanium caseband to improve the acoustics, and added an off switch to silence the fading buzz one would otherwise expect from a traditional alarm. In order to achieve this they added an exclusive Tudor module to the ETA 2892 base movement.

This new Heritage attracted significant interest from many other companies, who were intrigued by this systematic reinterpretation of the past. The tightly controlled prices at which these new Tudor Heritage models were offered were also strongly aligned with the spirit of age, which was moving inexorably towards greater restraint – a reaction to the straitened economy, but also no doubt to the widespread escalation in watch prices. At the same time, similar phenomena were apparent in other sectors; the car industry, for instance, became quite partial to “reinterpreted” models such as the Fiat 500 or the Mini. But the real turning point in the perception of Tudor’s approach came in 2012 with the Heritage Black Bay, which revisited the 60-year history of Tudor dive watches, which debuted in 1954.

This watch rapidly became one of the brand’s best-sellers. What made it different was that it didn’t merely reinterpret a single model: it drew inspiration from a whole series of dive watches from Tudor’s back catalogue. With its domed crystal and dial, bevelled lugs, absence of crown protection, unidirectional knurled bezel and distinctive snowflake hands (first seen in 1969), the Heritage Black Bay achieved an indefinably vintage look by combining elements from several different models. This highly successful revival watch, which was rewarded with the Grand Prix d’Horlogerie de Genève in 2013, also sported a price tag that defied comparison: CHF 2,950 (with ETA movement; these days you need to add CHF 500 for the new Tudor manufacture movement). This success confirmed the validity of the company’s systematic approach.

Tudor harnessed the momentum, in 2013 launching the Heritage Chrono Blue, inspired by a 1973 column wheel integrated chronograph. Once again, the design harks back to the original, taking some iconic features such as the colour, obviously, and the historic 45-minute counter, but replacing other elements in the interests of improved legibility: the indices, for instance, are now three-dimensional with metallic trim, and filled with Superluminova.

Two new versions followed in 2014. The Black Bay “Midnight Blue” with black dial and blue bezel, a reference to the models created by Tudor for the French Navy, further reinforced Tudor’s reinterpretation drive. Because of its historic legitimacy, an interesting side effect has been to inflate the prices of the vintage models, to the point where the cost of an original Tudor Marine Nationale, despite not being particularly rare at the time of production, has ballooned from around CHF 5,000–8,000 to CHF 25,000! The other 2014 model was the Ranger, a reinterpretation of a 1967 watch, boosted from 34 mm to 41 mm.

There followed a hiatus in 2015 – the company had enough on its plate with the launch of its new manufacture movement – but this year’s new model, the Black Bay Bronze, has already turned a few heads. The use of bronze, a strong trend for a number of brands at the moment, and a favoured material for marine applications, is further legitimised by Tudor’s numerous partnerships, not only with the French Navy, but also with the navies of the USA and Canada. The main feature of bronze is that it develops a patina with age, but Tudor has developed a special alloy of copper and aluminium that ages homogeneously, giving the watch a distinctly vintage but noble aspect. 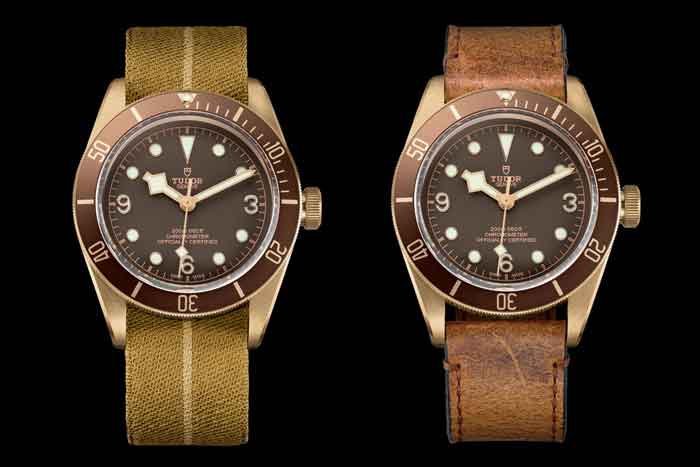 As we can see from our analysis of “reinterpretation” according to Tudor, the company’s success undoubtedly springs from its deep understanding of what collectors and connoisseurs of vintage watches are looking for, which can be gleaned from the numerous blogs and forums they frequent. Reinterpreting means mastering the subtle alchemy of retaining certain key details (which can sometimes be tiny – take the red triangle first seen in 1958, reproduced on the bezel of the Black Bay Black) while improving the ergonomics and function through judicious application of modern production techniques.

This “operation reinterpretation” probably also owes its success to the team that Tudor charged with reawakening the brand, all watch collectors with a passion for watchmaking history. And one final element, particularly crucial today: irresistible value for money. 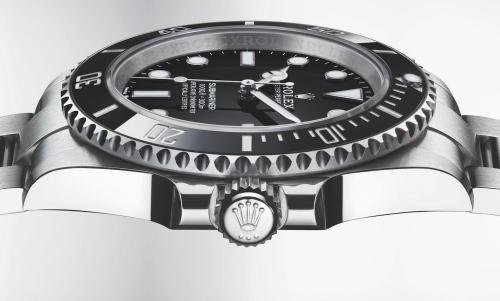 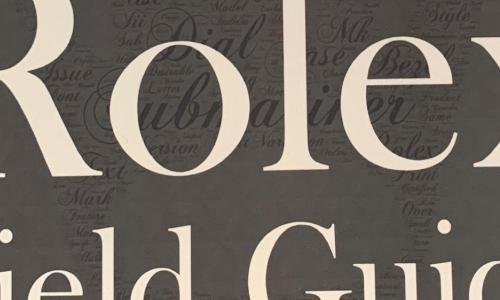 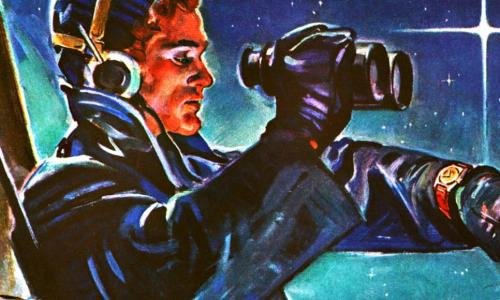 No price bubble for the Rolex Bubble Back

1933 - in order to make room for the newly patented and revolutionary rotor that transformed manually wound watches into automatic ones, the engineers at (...)