Chopard’s “brand within the brand” celebrates its 25th anniversary this year with a trilogy of chiming watches that showcase the expertise acquired over a quarter of a century. This long-term and remarkably consistent endeavour is the product of the calm determination of one man: Karl-Friedrich Scheufele. He gave us a few hints about the future of the L.U.C adventure.

Chopard’s “brand within the brand” celebrates its 25th anniversary this year with a trilogy of chiming watches that showcase the expertise acquired over a quarter of a century. This long-term and remarkably consistent endeavour is the product of the calm determination of one man: Karl-Friedrich Scheufele. He gave us a few hints about the future of the L.U.C adventure.
I

s the appreciation of sound and melody universal? “I believe so. As in classical music, there are certain schools, but talented performers are universally recognised. On our modest scale, it is the same principle that we are striving for with our minute repeaters,” replies Karl-Friedrich Scheufele, president of Chopard, with his customary humility, as he presents a trilogy of chiming watches from the brand’s manufacture in Fleurier, to mark the 25th anniversary of L.U.C.

An ardent collector of antique clocks and watches, as well as a music lover himself, he certainly has a well-trained ear. Chopard’s mastery of chiming watches is the result of continued research since the 2016 launch of the first Full Strike minute repeater, the product of some 17,000 hours of R&D, and four patents. 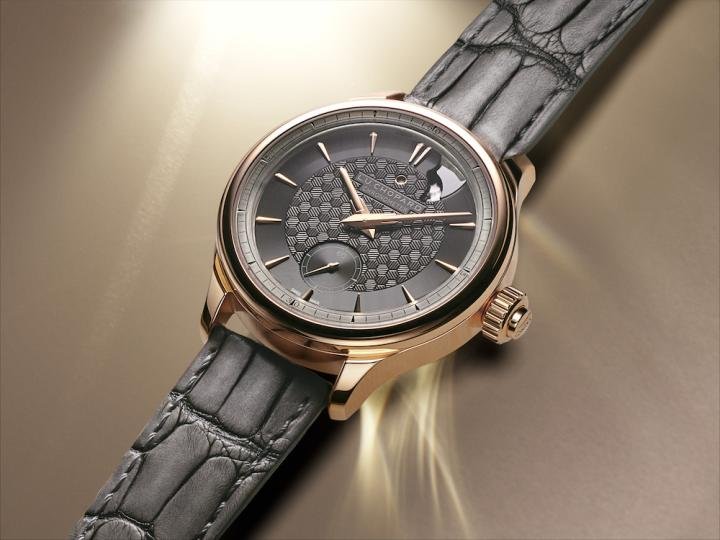 The L.U.C Strike One chimes at the passing of each hour, on a Chopard-patented sapphire monobloc. Equipped with the new L.U.C 96.32-L movement, this refined 40 mm-diameter timepiece in ethical 18K rose gold is chronometer-certified and bears the Poinçon de Genève quality hallmark. Its solid gold ruthenium grey dial is hand-guilloché with a honeycomb motif.

Academic partnerships, first with the University of Lyon and now with the Geneva engineering school HEPIA, have led to ever more successful results. “With them, we have developed a way to objectively measure improvements to sound quality. A comparison with the original model leaves no doubt that we have made considerable progress,” Karl-Friedrich Scheufele notes. 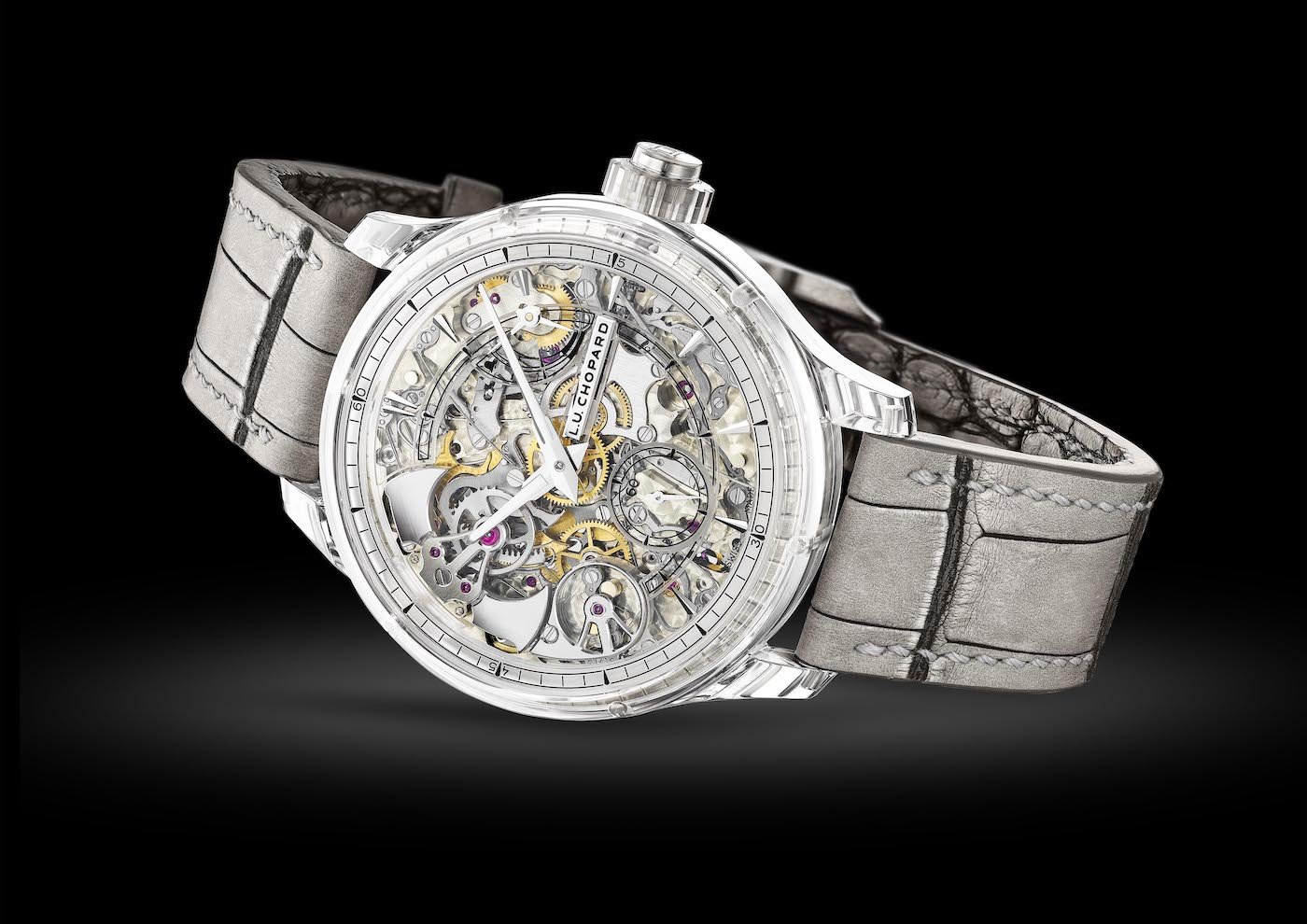 A trio of increasing complexity

Chopard’s R&D resulted in the use of sapphire gongs that were separate from the movement and an integral part of the glass topping the dial.

To understand the genesis of these complications, let’s remind ourselves what was so special about the L.U.C 08.01-L calibre that equipped the 2016 model. Whereas in other minute repeaters the sound is generated by a hammer striking metal gongs, which are part of the movement, Chopard’s research led to the use of sapphire gongs that were separate from the movement, and formed an integral part of the glass topping the dial. 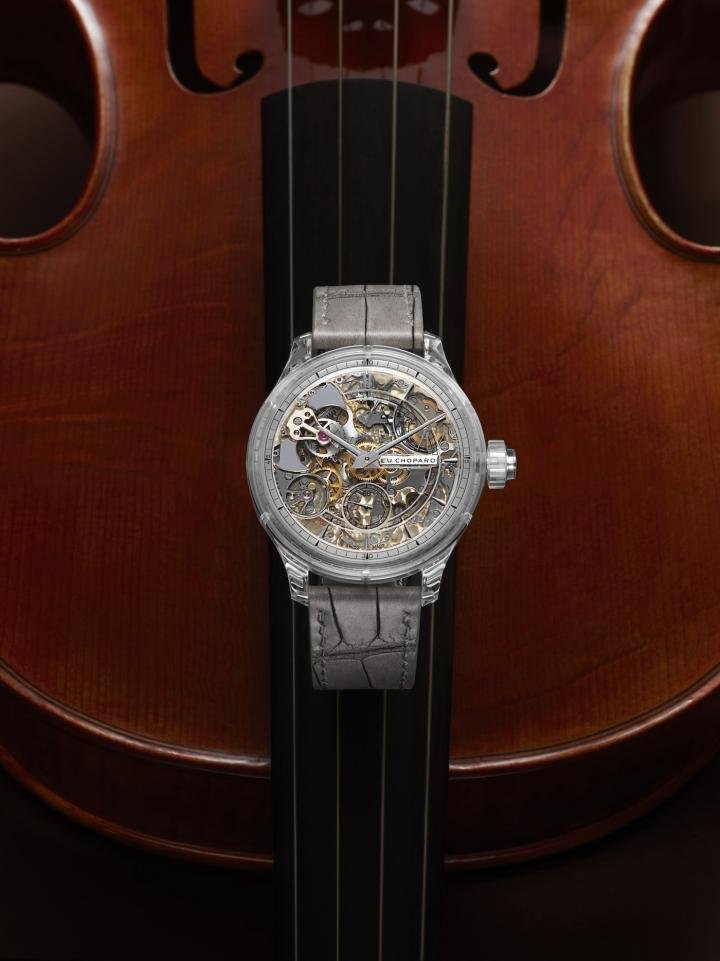 In addition to the gongs of the L.U.C 08.01-L chronometer-certified calibre, the entire case, crown and dial of the new L.U.C Full Strike Sapphire are cut from blocks of sapphire. Measuring 42.5 mm in diameter and totally transparent, it offers a 360-degree view of a movement with exceptional finishes. It bears the Poinçon de Genève quality hallmark, a first for a non-metallic timepiece.

Thus, as the brand explains, “the gongs and glass are machined in a single piece – without any discontinuity, glue, or welding – from a solid block of sapphire. The sound generated by the hammer and the gong is transmitted outwards through the largest surface of the watch – the glass – which is also a homogeneous medium, thereby guaranteeing ideal conduction. Moreover, the sound is quite literally crystal-clear, since it emanates from pure corundum crystal, the scientific name for sapphire.” 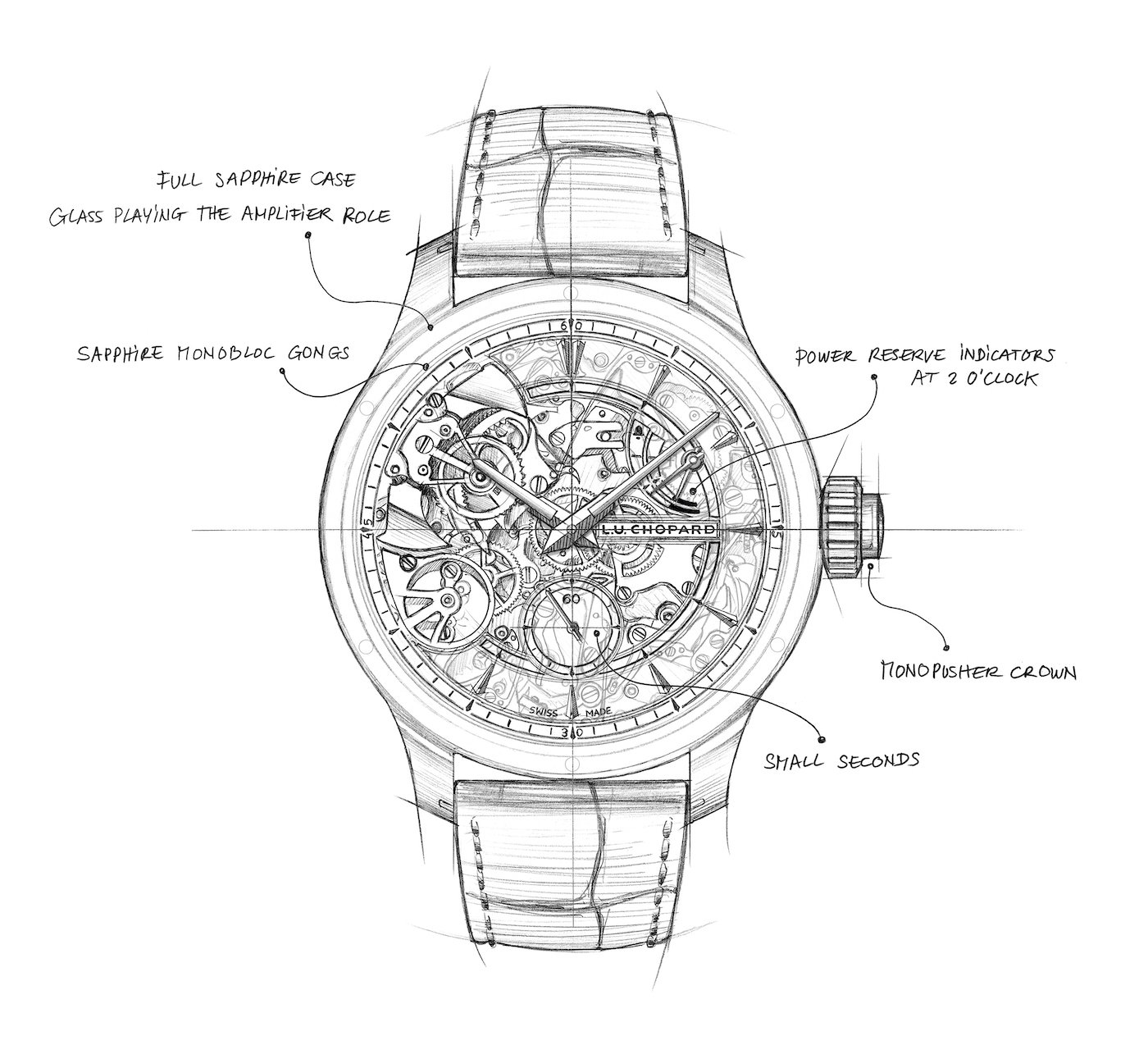 In 2017, the L.U.C Full Strike was awarded the Aiguille d’Or at the Grand Prix d’Horlogerie de Genève. Even after this remarkable achievement, Chopard continued to push ahead with its research into chiming watches.

These complications represent the pinnacle of watchmaking expertise: a subtle combination of technique, craftsmanship and emotion. But their complex mechanics are only the first challenge. The second, more intangible and even more complex issue resides in the sound quality. In order to optimise the acoustic richness of the Full Strike’s single-piece gong/sapphire crystal system, Karl-Friedrich Scheufele pioneered a new approach. The result is the 2022 trilogy. 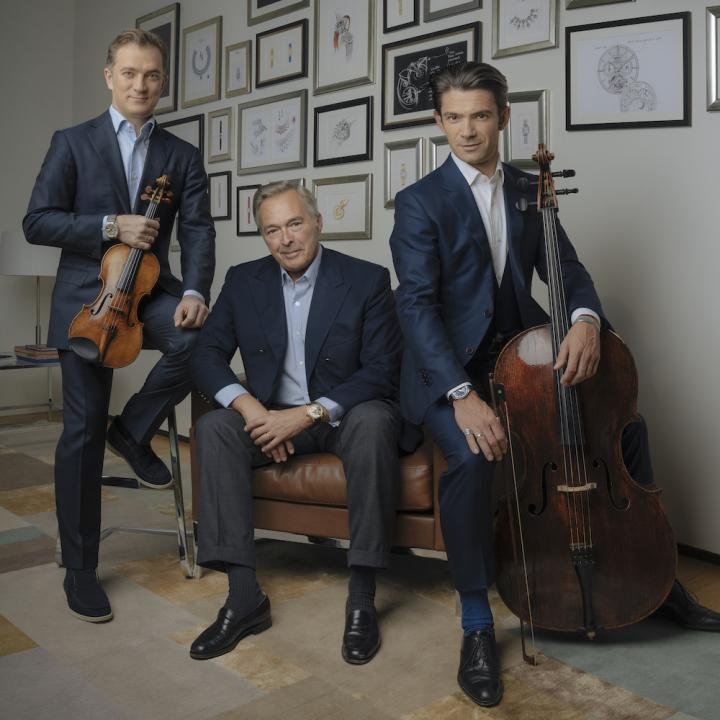 Karl-Friedrich Scheufele, co-president of Chopard, with the violinist Renaud Capuçon and his cellist brother Gautier Capuçon, who helped develop the sound of the new chiming watches.

It was the watchmaker’s meeting with violinist Renaud Capuçon and his cellist brother Gautier Capuçon that set him off in a new direction. The former plays on a period violin by Guarneri, dating from 1737, the latter on a cello by Matteo Goffriller, a luthier equally renowned in his field. Both are specialists in acoustics and sound. The idea behind the new version of a minute repeater watch was to “think of it as a musical instrument ”. 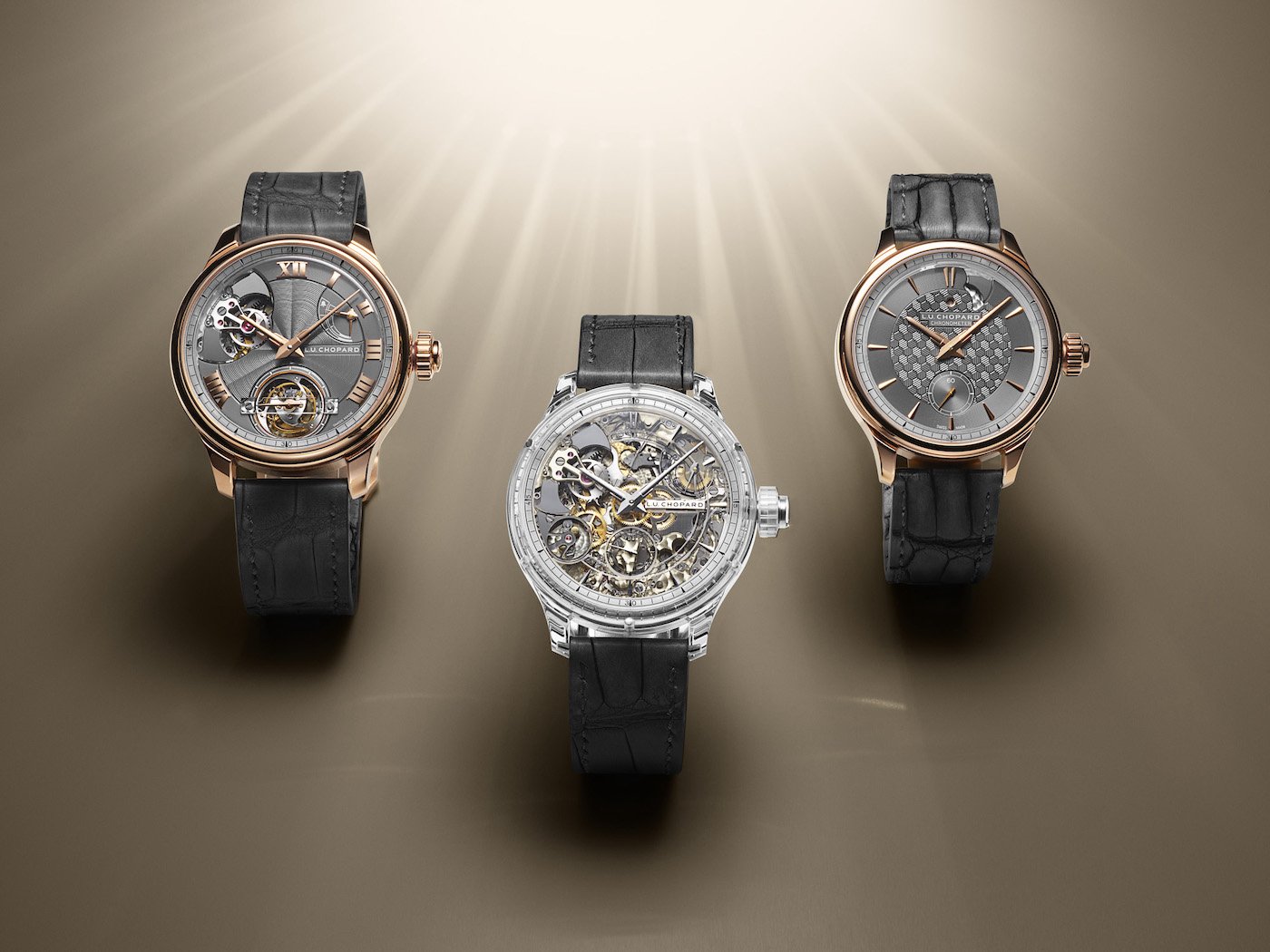 In 2018, Karl-Friedrich Scheufele invited the Capuçon brothers to help him with the design of a new limited series of chiming watches. Aided and abetted by the engineers of Chopard Manufacture, they drew on their artistic sensibilities to fine-tune the sound produced by the Chopard-patented sapphire gong/crystal technology.

The approach was validated by the Applied Acoustics Laboratory of the Geneva engineering school HEPIA. There, Professor Romain Boulandet created an analytical programme that went beyond the purely measurable criteria of acoustics (sound intensity, tonal richness, damping factor) to incorporate another dimension: that of the sound as perceived by the listener. The sound produced is purer, longer and more harmonious than that of a traditional metal repeater mechanism.

Steel, brass and gold are living, changing materials, even if they change slowly. Sapphire gongs, on the other hand, are totally inert.

Most of all, the new approach provides a vital means of maintaining homogeneous sound quality over time. While steel, brass and gold are living, changing materials (even if the changes occur very slowly), sapphire gongs are completely inert. They do not deform or show wear, and they don’t expand with heat. They always play the same F and C sharp, thus ensuring that the sound itself remains completely constant. 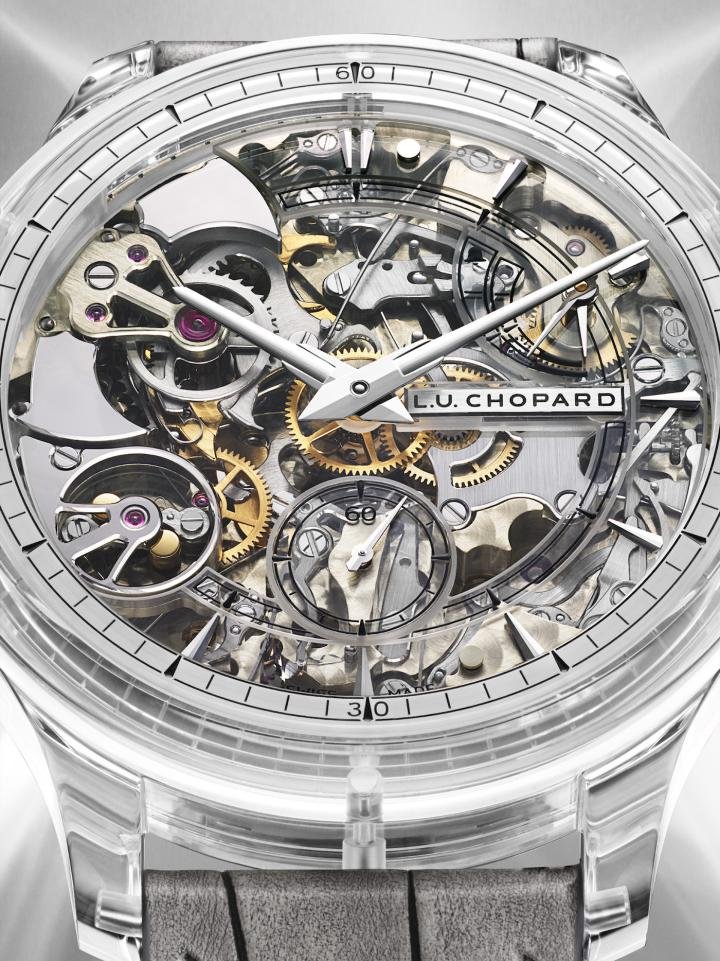 Furthermore, the material from which the Full Strike cases are made, although it plays a secondary role compared to the sapphire watch crystal, adds its own ‘colour’ to the sound. After issuing several limited editions in rose and white gold, platinum and even steel, the L.U.C. chiming watches aim to achieve “a true state of permanence, one that exempts them from any adjustment.” 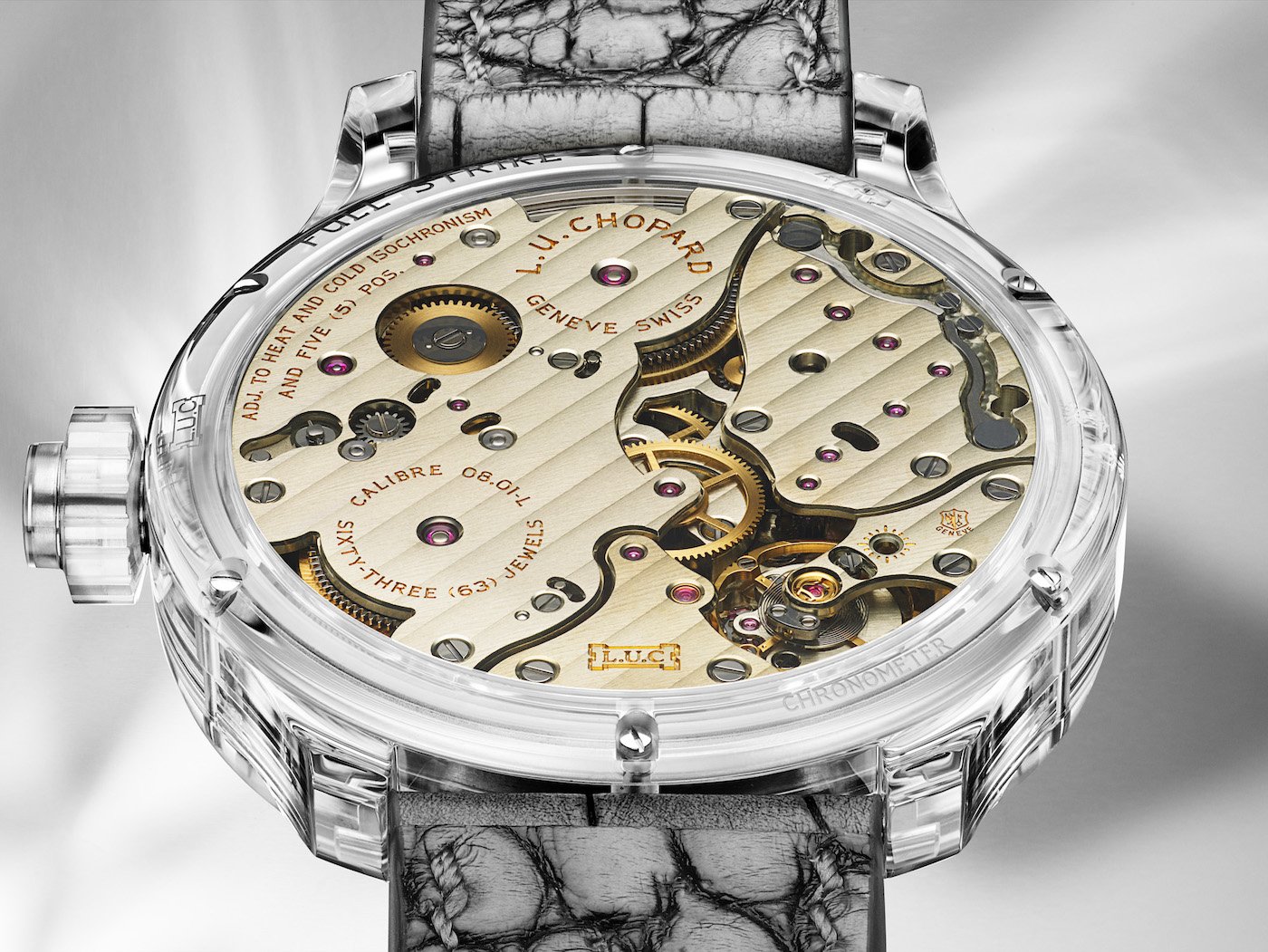 Towards the ultimate Grail

“Minute repeaters already represent a horological pinnacle, after the elaboration of the striking mechanism. But I won’t be betraying any secrets if I tell you that we haven’t reached the end of the road yet,” confides Karl-Friedrich Scheufele. Reading between the lines, this is an elegant way of hinting at a future “Grande Sonnerie” mechanism that would truly cement the L.U.C’s patient rise to prominence at Chopard.

In Fleurier, the dedicated L.U.C teams share their workshops with the artisans of Ferdinand Berthoud. The name was rescued by Karl-Friedrich Scheufele a few years ago for an ultra-limited annual production of (very) Haute Horlogerie, inspired by the prowess of the pioneer of the marine chronometer. Although their operations and brand concepts differ, it is easy to imagine that the new Ferdinand Berthoud venture feeds the thirst for technical innovation at L.U.C in its own way, and that the exchange of know-how proves fruitful. 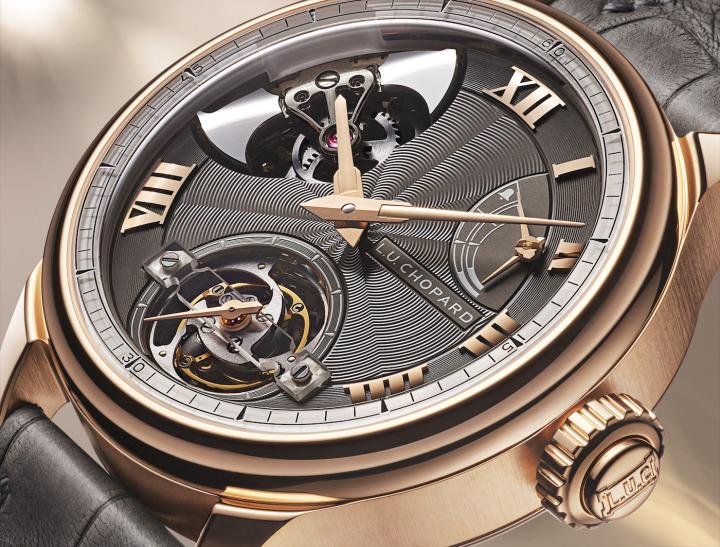 This sincere passion has been recognised by a new wave of collectors who appeared during the last two years, marked by the pandemic. Successive lockdowns have proved instrumental in spreading a fascination for watchmaking culture. Ferdinand Berthoud’s stock sold out in record time, as did L.U.C.’s most sought-after timepieces. “The craze for fine mechanical watches appears to be far stronger than before,” notes Karl-Friedrich Scheufele. “Certain editions, such as the L.U.C Qualité Fleurier Jubilee of last year, limited to just 25 pieces, were immediately acquired by young collectors. This new generation is very interested in what we have to offer.”

For all that, the president of Chopard does not want to focus exclusively on the most upmarket production – as is the general trend in the Swiss watch industry. “Speaking of new collectors, it is important that the younger generation should also have access to fine watchmaking at a more accessible price, which is why we keep offering timepieces in very different price segments.” 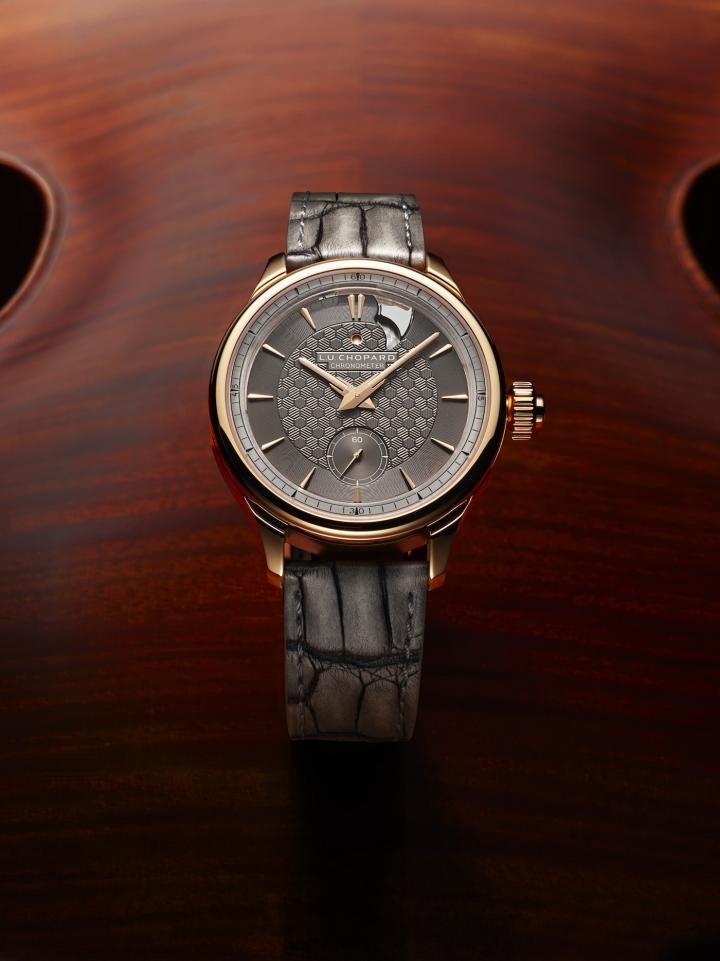 It has to be said that the concept of passing things on to the next generation is an omnipresent theme for Karl-Friedrich Scheufele, whose son Karl-Fritz is increasingly involved in Chopard’s activities. But it’s also about the preservation of know-how.

He adds: “We have reached a certain stage in terms of bringing activities in-house, but the main challenge now is to pass on rare skills from one generation to the next. This is why we are part of the Time Aeon project, a new approach that involves bringing in an entire team around the artisanal production of a mechanical reference model. It is about safeguarding know-how that is, fortunately, increasingly valued by the public.” 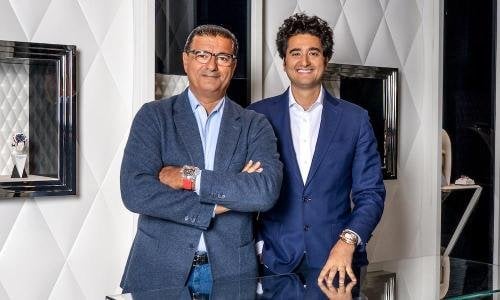 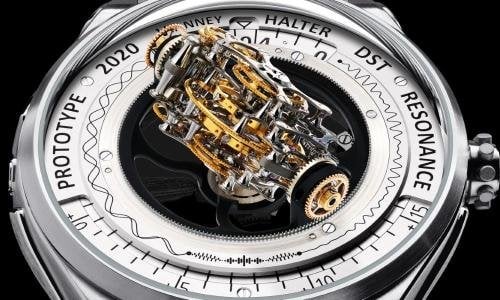 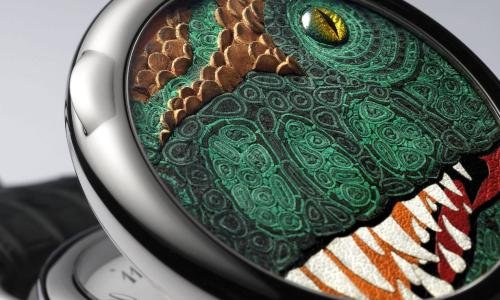 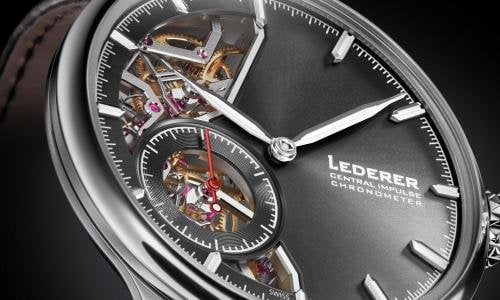 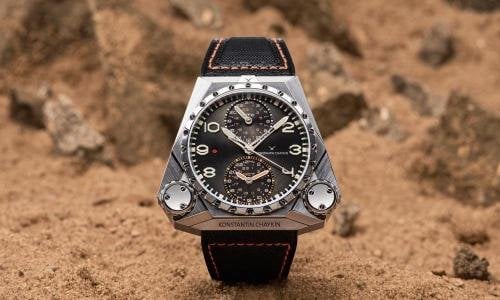 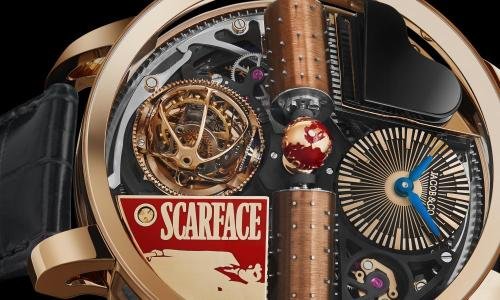 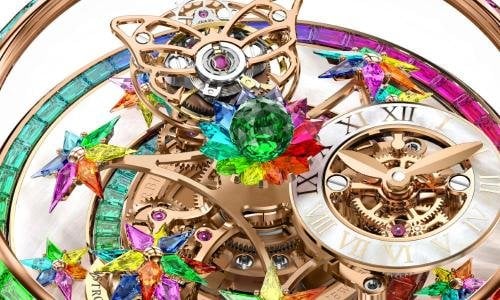 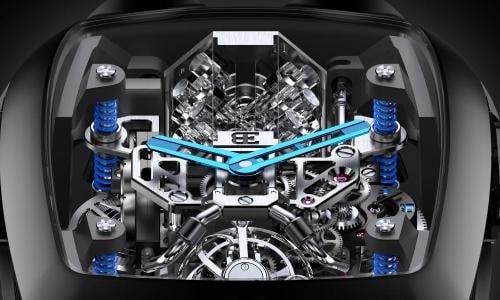 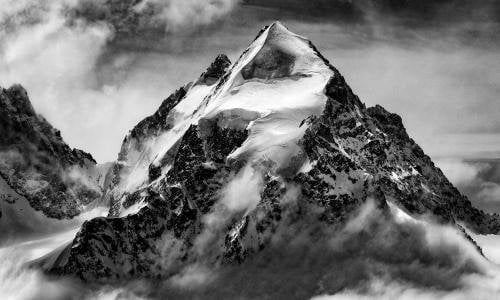 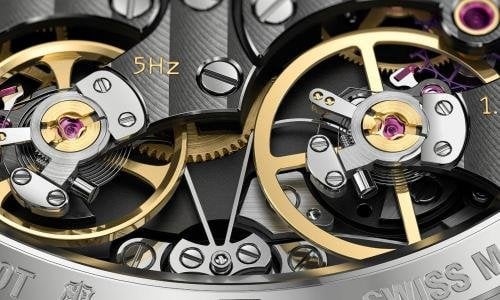 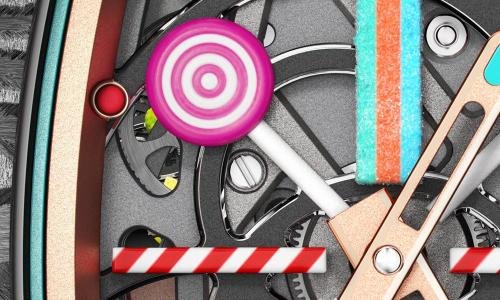 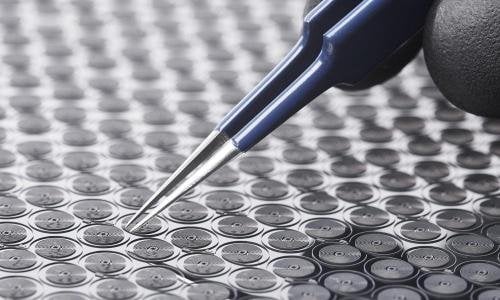 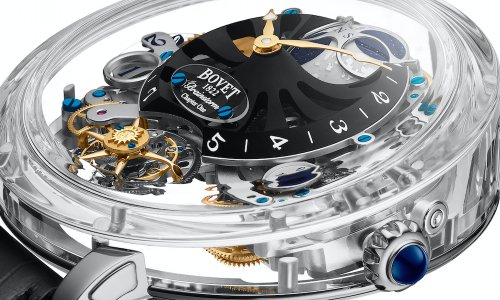 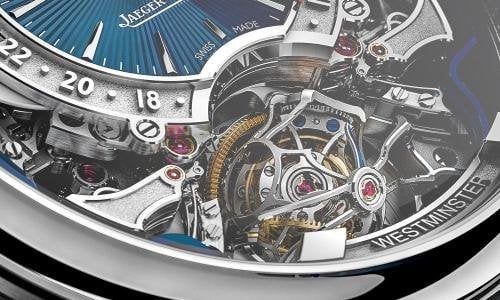 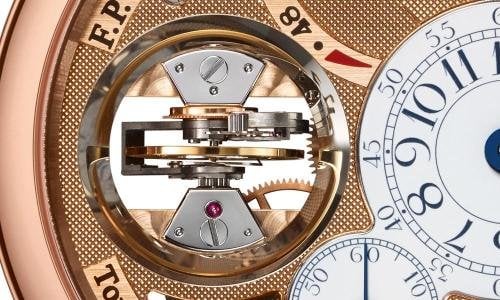 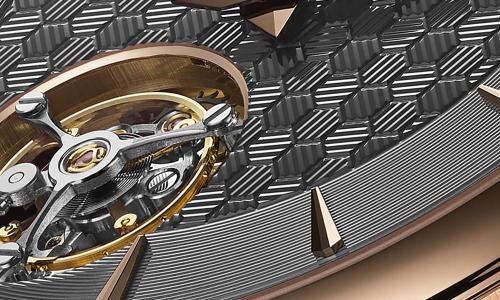 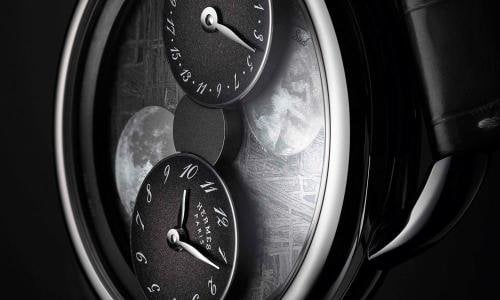 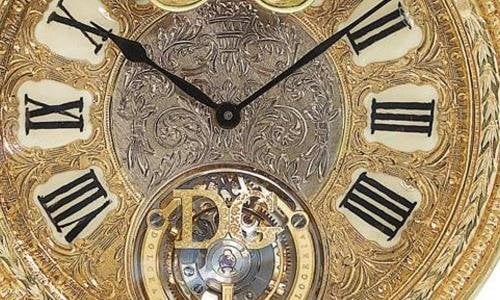 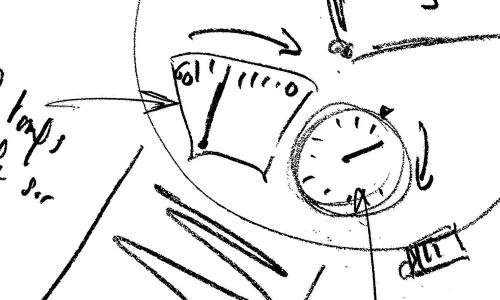