Technology is clobbering the fashion-watch business. Can it also save it? Fashion-watch leader Fossil thinks so.

Technology is clobbering the fashion-watch business. Can it also save it? Fashion-watch leader Fossil thinks so.
T

he fashion-watch business is hurting. Industry executives cite a bouillabaisse of problems, including the decline of department stores, the rise of e-commerce, reduced mall traffic, changing tastes of the millennial generation, and, for U.S. companies, a stronger dollar. The biggest problem, though, is the surge in sales of smartwatches over the past two years. It began in April 2015, when a certain $234-billion maker of smartphones decided to dive into the tiny pond that is the mid-priced watch market.

The Apple Watch, which debuted at an opening price of $349 (reduced to $299 last year) made a big splash whose ripples have shaken watch firms that compete in that price range. Apple does not release sales data for the watch, but research firms estimate annual sales of about 12 million units in 2015 and 2016, amounting to around S6 billion each year. “Apple has played a disruptive role in the fashion watch category,” Movado Group President Ricardo Quintero told financial analysts on the company’s fiscal-year-end earnings call in March. (Illustrating the point, Movado announced two weeks later that it was eliminating Quintero’s position in a cost-saving restructuring.)

Fossil, a business leader at a critical point

For Fossil Inc., the leader in the fashion-watch segment, Apple’s arrival was particularly disruptive. Fossil, with 18 brands (six of its own and 12 licensed brands) had been the big gorilla in the fashion watch world for years. Suddenly, it was competing with a King Kong 67 times bigger than it was (measured by revenues). “Prior to that, we were clearly positioned as the competitively advantaged leader in a growing category,” Fossil CEO Kosta Kartsotis told financial analysts in February. “However, with the introduction of technology into wrist devices, traditional watches came under pressure and we were disadvantaged. We didn’t have the technology capabilities to compete with smartwatches, leading to a decline in our market.”

Fossil has responded by fighting fire with fire. In a dramatic shift, Fossil has adopted a new strategy that it calls New World Fossil. The top priority is to embrace wearable technology. “Wearable technology has quickly emerged as a meaningful segment within accessories as consumers continue to be drawn to technology-enabled products that complement their connected lifestyles,” the company said in its 10K filing for 2016. “We believe there is a major opportunity to combine fashion and technology, important attributes to consumers wearing these devices.”

“Our thesis [is] that wearable technology can be the catalyst to drive growth in the watch category,” Kartsotis told financial analysts in the February conference call. 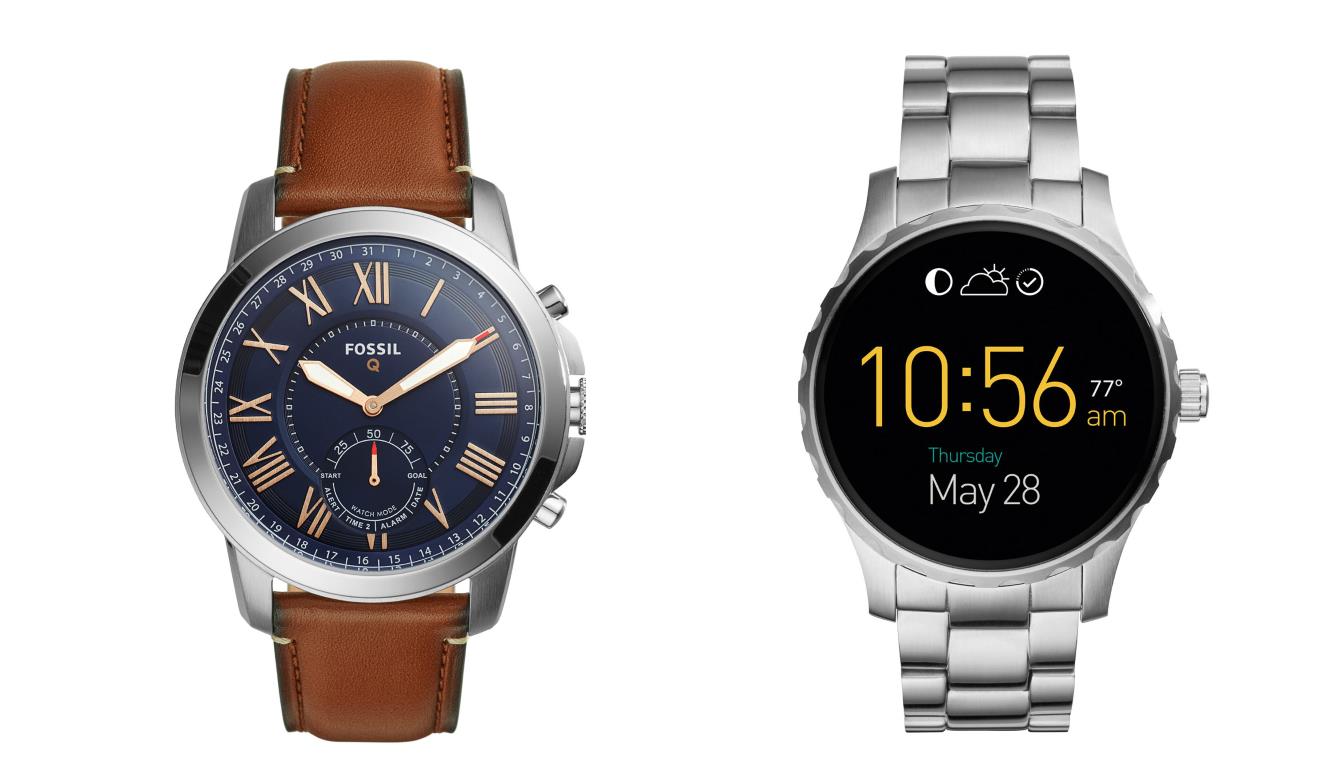 The different faces of the Fossil Q

Over the past year and a half Fossil has put its money where its mouth is. In December 2015, it spent $260 million to acquire Misfit, the maker of wearable fitness trackers and smartwatches. In 2016, Fossil launched 100 new wearable products in eight brands and 40 countries, led by models like the Fossil Q series, Skagen Connected and Michael Kors Access smartwatches. It sold more than 1.5 million pieces worth $170 million, it says. This year, Fossil will roll out another 300-plus new wearables in most of its brands. They will hit the market in the second half of the year and be “much improved even from last year,” 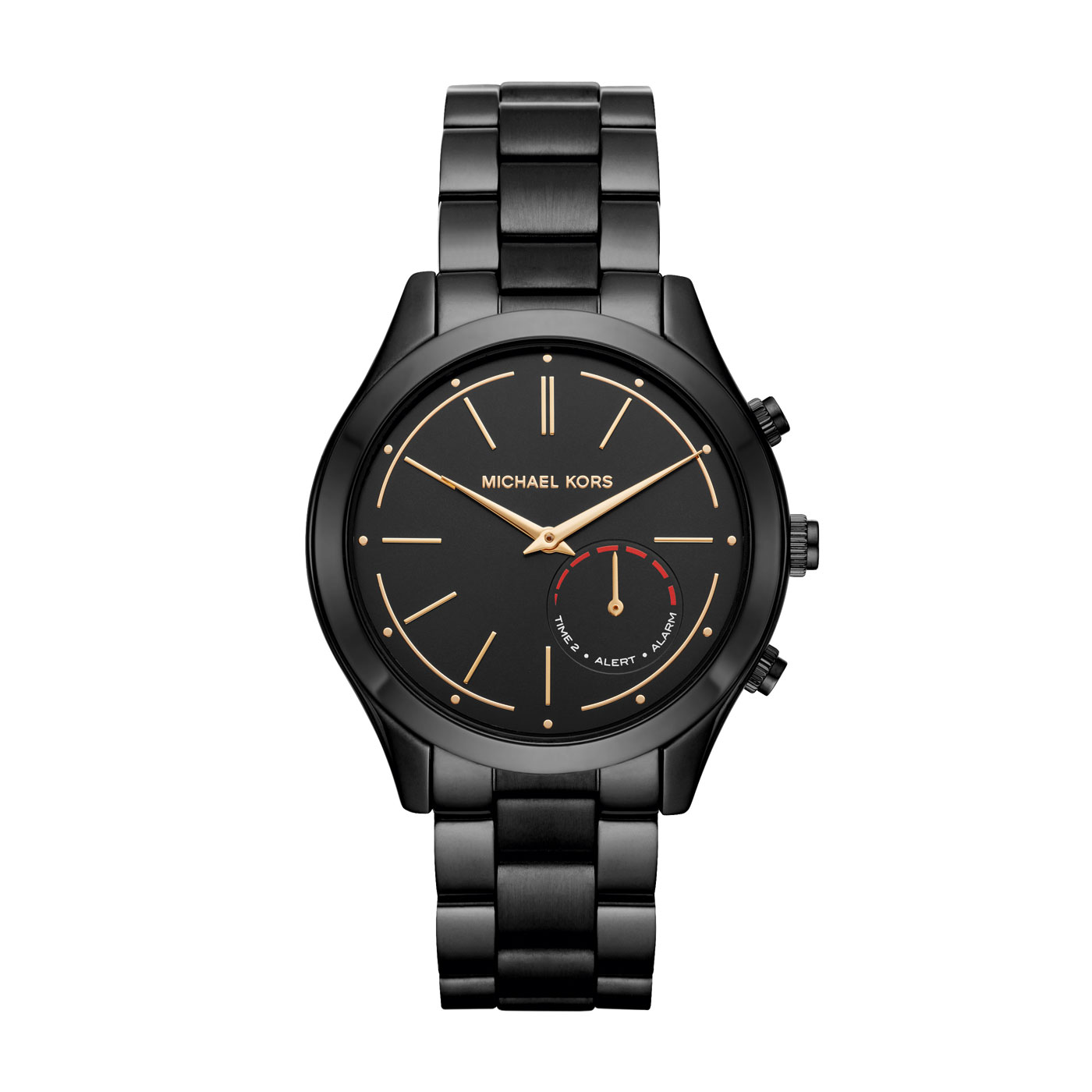 Kartsotis says, with “more innovations in function and design, more vibrant screens, better software and apps, and they are slimmer and sleeker, which will attract even more females to the category.” (Women account for 70% of its fashion watch sales, Fossil says.)

The stage is now set for an epic battle for control of a $45.5 billion market. That’s the size of the combined wrist devices and fashion watch businesses, according to Dennis Secor, Fossil’s chief financial officer. In 2014, the total fashion watch market was roughly $35 billion, Secor says. “Since then, the traditional watch market has been declining in the low to middle single digits, driven mainly by the disruption of technology.” However, “We’ve always viewed the wearables and traditional watch markets as converging,” Secor says. The market is now “30 % larger than it was in 2014 and growing.”

For Kartsotis, what’s happening in the fashion watch sector is more like a collision than a convergence. “It’s two businesses colliding,” he told the financial analysts. “We feel with our new technological capabilities, we are positioned to gain share as the two businesses of watches and wearables collide. Our objective is to disrupt the watch business with connectivity, and to compete in the wearables business with style, branding and story-telling.”

Two years ago, Apple disrupted the fashion-watch business with technology. Now Fossil wants to return the favour. “We are disrupting [the smartwatch] category with our fashion brands,” Kartsotis says. “We have turned what was once a headwind to our business into a tailwind that should only continue to get stronger,” Kartsotis told the analysts. 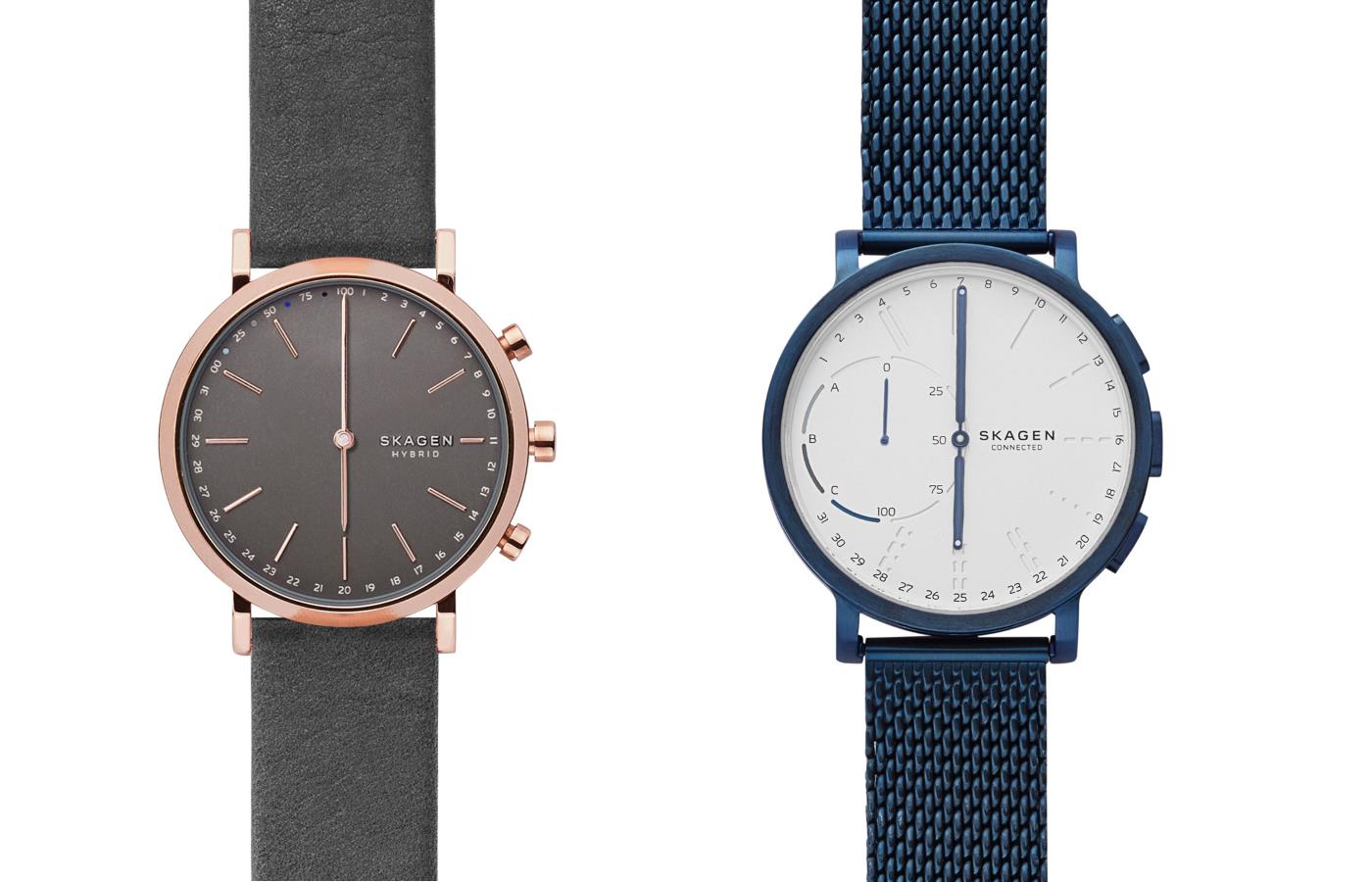 The problem is that smartwatches are not the only headwinds afflicting Fossil and the fashion-watch segment. There are other problems. A big one is e-tailing, another new technology. The company says it is grappling with “a significant decrease in traffic in many of the shopping malls in which our stores are located.” Traffic is likely to continue to decrease as consumers turn to e-commerce, Fossil says.

Fossil is dealing with the sales slowdown by closing stores (40 last year), reducing watch SKUs (stock-keeping units) and cutting jobs. Meanwhile, sales and profits continue to be battered by the strong U.S. dollar. Between 2014 and 2016, it eroded sales by $250 million and operating profit by $150 million.

It all adds up to a tepid forecast for 2017. Fossil presumes that its traditional watch business will continue to deteriorate. It predicts that net sales for the year will be within a range of -6.5% to flat (on a GAAP accounting basis) or -4.5% to +2% (non-GAAP basis).

Inevitably, some industry observers and analysts are skeptical about Fossil’s strategy. Ike Boruchow of Wells Fargo downgraded Fossil’s stock from “market perform” to “underperform” in February. Boruchow said that he had increasing concerns about “a business caught in the cross-hairs of an evolving category amid shifting consumer preferences.” Boruchow noted that Fossil plans to lower prices on its smartwatches this year to drive volume and gain market share. (Kartsotis calls it “ultra-competitive” pricing.) “Fossil’s attempts to drive wearables at all costs likely means they will continue to siphon sales from their high-margin traditional watch business,” Boruchow wrote.

Fossil needs aggressive pricing because it intends to enter a new channel of distribution, consumer electronics stores, “a channel not previously available to our fashion brands,” Kartsotis said, which will boost sales. Traditional-watch executives, like Swatch Group CEO Nick Hayek, consider this a risky move for a watch company. “The smartwatch producers and the fitness trackers all went with a consumer electronics distribution,” Hayek told me in March. “This is not watches, it’s consumer electronics, with discounting, bringing new models, quick cycles. They have no margins. Nobody earns money. This is a mistake.”

Moreover, the real problem with the fashion watch business, some industry executives say, is not so much competition from connected watches, as a lack of newness in the category. “You go into any department store today and it’s a sea of sameness,” says Charles Kriete, president of Zeon USA/Ingersoll 1892 and the former head of Kenneth Cole Watches. There is an unusual lull in the fashion watch market now, Kriete says. “There are no hot designers to drive the business, as we had with Kenneth Cole and Fossil had with Michael Kors. There are no hot fashion looks like the pink bracelet craze in ladies’ fashion a few years ago.” Fashion runs in cycles, he says. “It’s not that people aren’t buying watches. They are. Even millennials are buying watches. But they are not buying designer brand watches.” Kriete cites the success of MVMT, an e-commerce watch brand founded by two millennials in 2013 that reportedly had sales of $60 million last year.

Fossil hears the criticism, of course. But they are busy creating the fashion-watch future, where connected watches are fashionable and fashion watches are connected. “There’s a lot of moving parts,” Secor told the analysts. “We’re flying at 1,000 miles an hour here.” 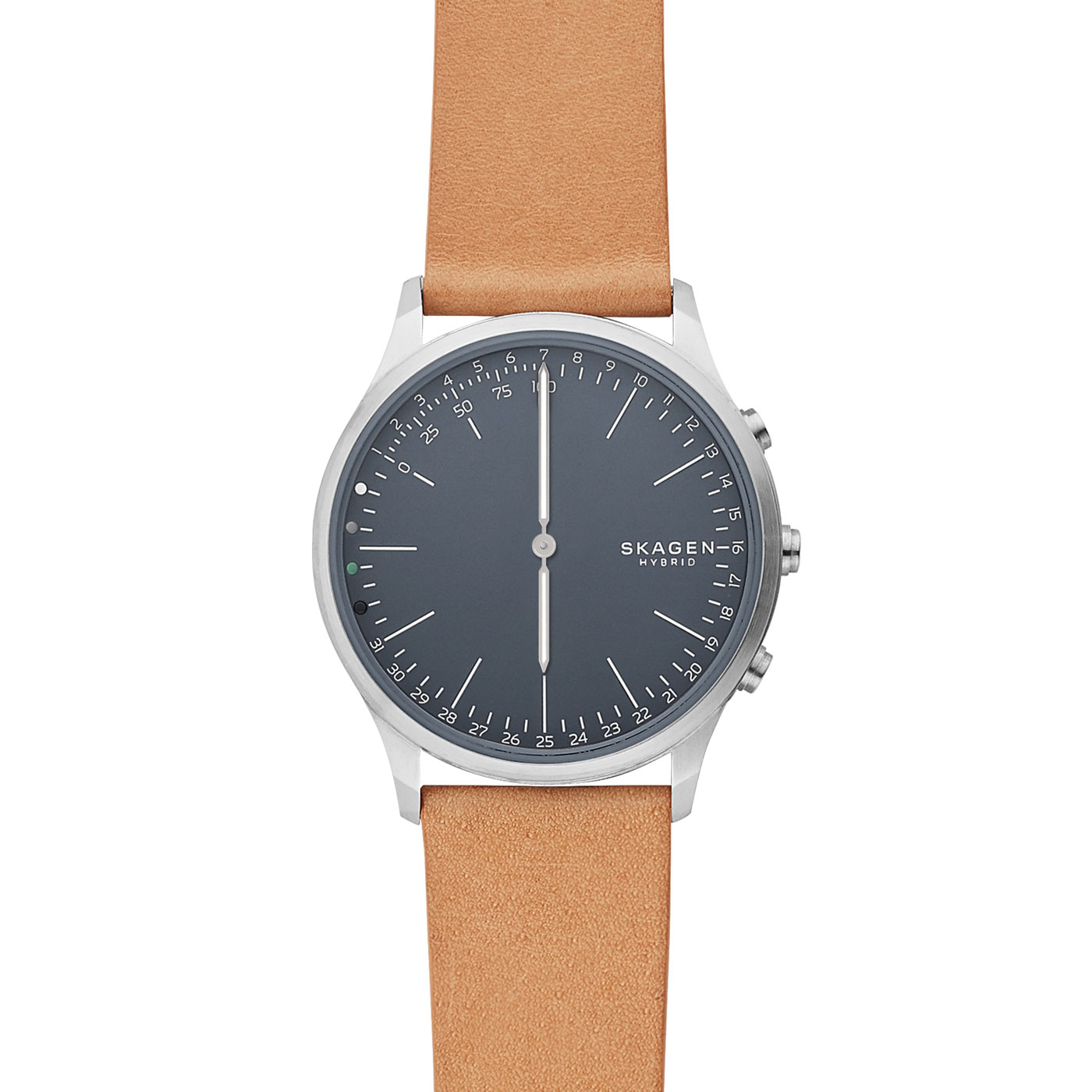 MOVADO: MAKING THE CONNECTION Like Fossil, the Movado Group, the world’s second-largest seller of licensed-brand fashion watches, thinks smartwatches are a smart move for fashion-watch companies. “We will begin to enter the fully connected smartwatch space,” stated then president Ricardo Quintero in March. (Quintero was laid off in April.) The company launched 47 wearable models in seven brands in more than a dozen countries between November 2016 and January 2017, the fourth quarter of its fiscal year. This summer it will launch Movado Connect, one of the first watches designed specifically for Google’s Android Wear 2.0, powered by the new Qualcomm Snapdragon chip. It will consist of 5 men’s styles with prices starting at $495. There will also be two styles in Tommy Hilfiger and Hugo Boss. (In addition to Hilfiger and Boss, the group’s licensed brands, which accounted for 48% of total group revenues last year, include Coach, Juicy Couture, Lacoste, and Scuderia Ferrari. It will add Rebecca Minkoff watches this summer. The company owns the Movado, Ebel and Concord brands.) The moves are a response to what Movado Chairman and CEO Efraim Grinberg called “a very difficult retail market, especially in the United States.” In a call with financial analysts to review the company’s results for fiscal 2017 (ended January 31), Grinberg noted, “Over the last several years, the watch category has been impacted by the decreased traffic to our retail partners combined with the introduction of wearables,” which he called “disruptive to the fashion category.” The solution is for the Movado Group to compete for that market. “In the smartwatch space, there is a continued opportunity as technology improves and consumers are able to get the creative designs they desire to deliver the functionality they are looking for,” Grinberg said. The Movado Group’s net sales for fiscal 2017 dropped 7.1% to $552.8 million. Net income fell 22.2% to $35.1 million.

The main problem was softness in the fashion and affordable-luxury markets in the United States. Total U.S. watch sales priced $3,000 and under declined 11% last year, the company said. One silver lining was the Movado brand, the U.S. leader in the $300 to $3,000 segment with a 21% market share, according to the NPD market research group. It outperformed the market and gained significant share in the fourth quarter, the company said.

Movado expects another difficult year this year, with net sales ranging from $515 million to $530 million, down 4% to 7% from last year. As a result, the company is reducing its workforce in the U.S. and Switzerland, which will save $12 million this year. The Movado Group’s move into smartwatches is a response to what the company calls “the current challenging conditions of the U.S. fashion-watch category.” It does not indicate a shift away from conventional watches. “We’re big believers still in traditional watches,” Grinberg said, “and believe that the category will stabilise and begin to grow again. But there is an opportunity for wearables.” (JT)