The proudly independent Franco-Swiss brand has brought the aeroplane cockpit to the wrist. It has followed a very precise trajectory. A pioneer in the XXL format, extreme readability, new materials, new designs such as the Skull, and even e-commerce (as far back as ten years ago), it is one of the rare brands created in the 1990s that really took root in the watch world, with the support of a powerful mentor with an elegant philosophy, Chanel. We talked to brand co-founder Carlos Rosillo.

The proudly independent Franco-Swiss brand has brought the aeroplane cockpit to the wrist. It has followed a very precise trajectory. A pioneer in the XXL format, extreme readability, new materials, new designs such as the Skull, and even e-commerce (as far back as ten years ago), it is one of the rare brands created in the 1990s that really took root in the watch world, with the support of a powerful mentor with an elegant philosophy, Chanel. We talked to brand co-founder Carlos Rosillo.
B

ell & Ross is a duality. Not just the name, which is linked to its founding duo, childhood friends Bruno Belamich (the designer) and Carlos Rosillo (the developer). Virtually everything about this Franco-Swiss brand seems to come in twos.

This duality takes several forms, such as its original round watches and the later square watches that have been welcomed into the collective imagination; breaking with shapes and materials while seeking to take root in the old Swiss watchmaking tradition; managing both the high expectations of the original military clientele and the aesthetic requirements of civilians; even its Instagram account, which plays around with short time and long time, as we pointed out in a recent column.

“We stand between the temptation of vintage and that of exploding all the codes.” 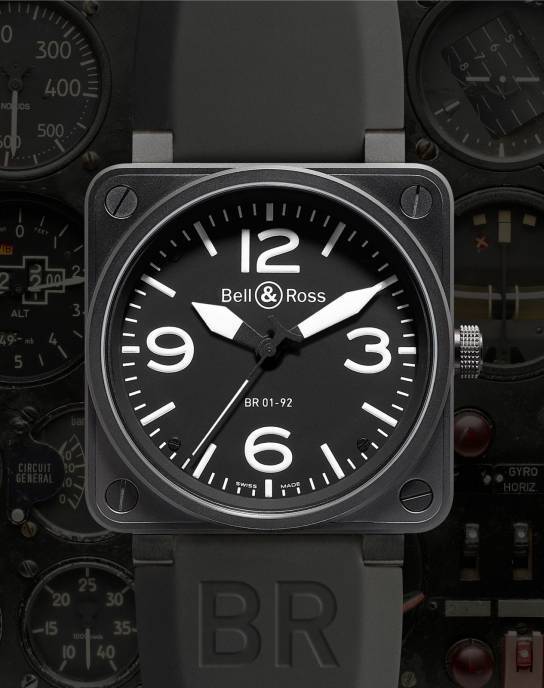 The brand was founded in 1992, and operates mainly in the CHF 2,000 to 10,000 segment. It breathed new life into French watchmaking at a time when its last remaining pillars were crumbling. The company likes to swim against the tide. It started out doing vintage in the 1990s, when watchmaking was trying to throw off the shackles of the past... and today it’s betting on futuristic disruption, notably via new materials, when the rest of the industry seems to have been teleported back to the 1960s!

But why choose, when you can have both? “Today, we are working in parallel on extending our Vintage line and experimenting with our BR-X1 line,” explains Carlos Rosillo. “We stand between the temptation of vintage and that of exploding all the codes... The paradox, no doubt, is that we’re trying to express our creativity in subtle but also disruptive ways. It’s just the dosage that varies!”

The ampersand that unites Bell & Ross is “the symbol of combined skills,” as Carlos Rosillo explains. While the brain and the heart of the brand are in Paris, its arms and legs are in Switzerland, at the G&F Châtelain watch manufacture in La Chaux-de-Fonds, owned by Chanel, where high-added-value collections are produced (notably the “experimental” BR-X1 and BR-X2 lines with in-house movement). Bell & Ross also calls upon local assemblers for watches equipped with ETA or Sellita calibres.

Carlos Rosillo and Bruno Belamich were supported in their early days by German brand Sinn, the custodian of a long tradition of aviation watches. Helmut Sinn, who died this year at the enviable age of 101 (read his portrait here) personally took them under his wing. Today they continue to call upon outside skills, be it Vincent Calabrese for jumping hours or Pierre Favre at MHC. And, unlike many others, they have no interest in hiding it.

Bell & Ross, which still supplies the elite RAID and GIGN troops, is structured around four solid design principles: legibility, reliability, functionality and precision. It is one of the few watch brands to have contributed to the modernity boom that has transformed the watch industry over the past twenty years. And it remains today a fine example of what an independent watchmaker can be, although we can well imagine that, in these times of consolidation and takeovers, some tempting offers must have landed on Carlos Rosillo’s desk. 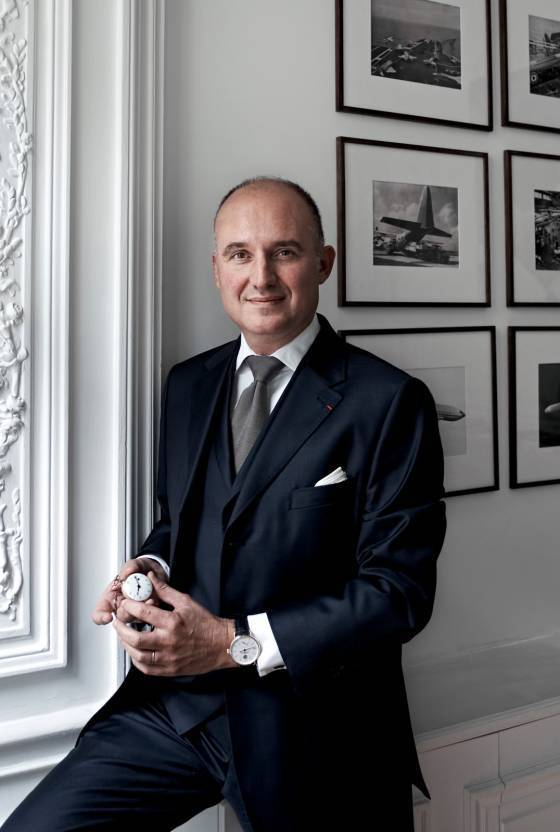 Whether it’s true disruption or simply a return to the past, today we see vintage inspiration and reissues almost everywhere in watchmaking. You even have a collection called Vintage, which includes the BR V2-94 Racing Bird Chronograph released this year. And yet, you are a relatively new brand. What’s your approach to this phenomenon?

We started to take an interest in vintage 25 years ago, at a time when it was not necessarily well received. It was a period of colour. We specialised in round military watches with white numerals on black dials. Some very well-established brands no longer had any models of this type! Vintage, in the form of black dials in particular, was not popular. What was most interesting to us was the readability, with the positive-negative contrast. But when we started out there wasn’t a fashion for vintage or military watches, like there is today.

“We started to take an interest in vintage 25 years ago, using contrasting black and white on the dial, at a time of bright colours.”

How did the idea for the square watch come about?

We initiated something with our models... and were in fact quickly overwhelmed by the trend that it generated. How do you stay distinctive enough? After producing only round watches, we introduced square models in 2005. Our inspiration was aeroplane cockpits, which systematically feature “circles on squares”. In very concrete terms, we put this cockpit on the wrist. Today we offer pocket watches, round watches and square watches. 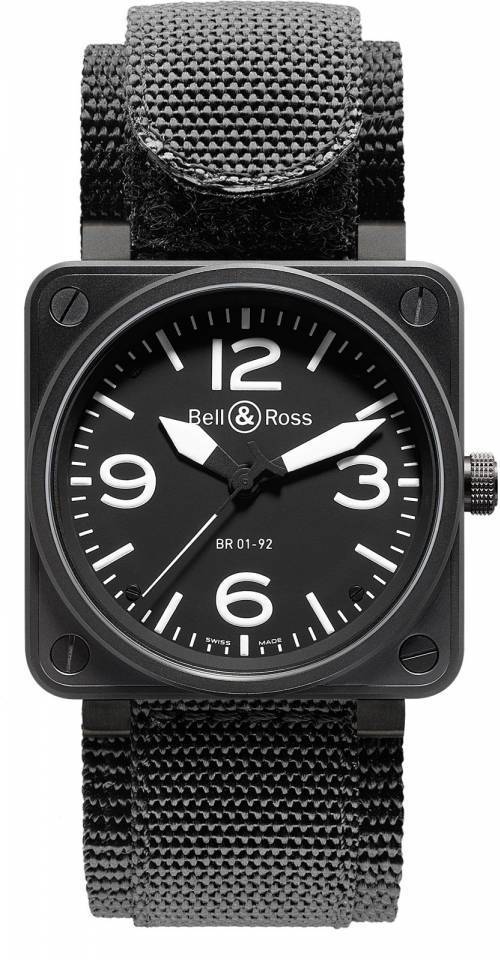 At the same time, you are also a pioneer in the use of new materials in watchmaking, through the BR-X1 experimental line.

Indeed, we have always practised the art of disruption and innovation, while trying to respect the most traditional aspects of watchmaking, based on four principles: readability, reliability, functionality and precision. We have introduced forged carbon and reinforced titanium, among other materials. We also try to spread these innovations over different collections, although the issue of cost does come into play. Our sapphire watches start at 69,000 francs, which is quite affordable compared to other models on the market. And I believe that this is the first time a watch brand has produced a watch without a case, since the two sapphire plates are placed directly over the movement of the BR-X2 Tourbillon Micro-Rotor!

You have also played a major role in the oversizing of watches over the past two decades, shocking the industry at first with your XXL watches. The trend now seems rather to be in favour of downsizing. But it’s hard to imagine a “mini” Bell & Ross!

The trend is certainly no longer towards gigantism, but sports watches still need to keep a certain size. We are necessarily rather large, because we are miniaturising something voluminous to start with. Moreover, a certain size is in keeping with our principles of legibility and precision. But very few of our watches are “oversized”: today we go from 39 mm to 46 mm in diameter. Rather, we have worked on reducing the thickness of our watches. Thus, the BR-X2 Tourbillon Micro-Rotor model has an extra-flat automatic flying tourbillon movement that is only 4.05 mm thick... and it is a square movement. 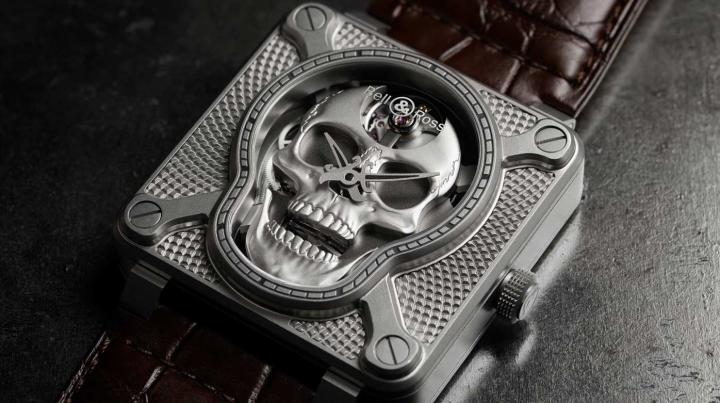 “The Laughing Skull asks an existential question: should we laugh or weep in front of death?”

Another trend that remains strong despite the passing years is the skull. There’s been a lot of talk about your Laughing Skull, which debuted at the CoutureTime show in Las Vegas. Who is this type of product for?

We launched a Skull in 2009, when we were in the middle of a watchmaking crisis. It leaves a mark on people’s minds. The symbol of the skull is particularly potent for the military; it’s a talisman that represents the courage to face death. At first, it was a bit of a scandal! This year we are launching the Laughing Skull, which is very special with its spectacular movement, visible through the case back. It is also the first time that we have released an automaton. This timepiece asks an existential question: should we laugh or cry about death?

Where are Bell & Ross’s main markets, and how many retailers do you have today?

We have 750 sales outlets in over 80 countries. Europe is one of our most developed regions. Two years ago, we took over distribution in Asia internally, and we already have a subsidiary in North America. Today, our most buoyant markets are the United States, France and Southeast Asia.

Which are the markets where you feel Bell & Ross’s potential is still underdeveloped?

China, most certainly. We have “sown the seeds”, but not overinvested. The Chinese market boom has begun with more classic watchmaking proposals, but our turn will soon come.

Many brands have opened their own stores in the last decade. Some retailers may have felt overwhelmed... You have 13 shops in the world. What is your strategy in this regard?

We have been restrained in opening our own stores, which are intended primarily for the brand’s pure aficionados. We have never competed with our own representatives. Our own shops aim to satisfy the market... and above all they are profitable, it’s not just about marketing or ego!

“Our own shops aim to please the market... and above all they are profitable, it’s not just about marketing or ego!”

How do you see the internet for your brand: as a communication tool or a sales tool... or both?

I believe we were the first luxury watch brand to launch an e-shop 10 years ago. We considered at the time that digital was going to be a major factor, and we could not leave that segment to third parties. We have published the prices of our watches online for a long time. We have also established partnerships with serious companies including Mr. Porter and Farfetch. It is the best strategy in the face of the effervescence of the web. Today, digital is a source of growth. We have more than 2 million visitors per year, with an average of 6 to 7 minutes spent on our site, and sales are beginning to be consistent. We also include retailers in the process. 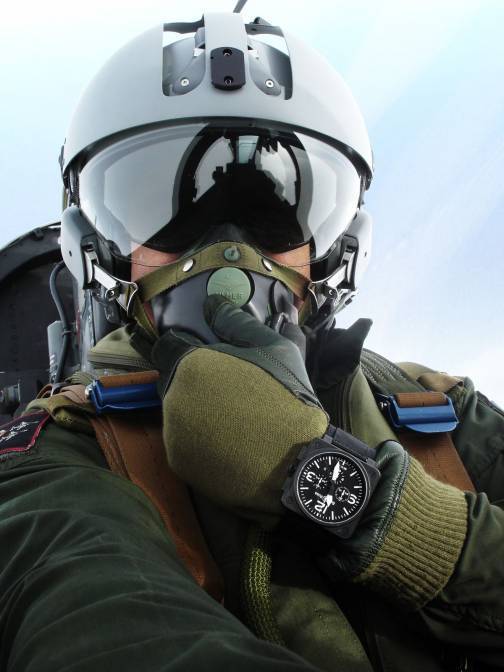 Where does your relationship with Chanel stand today, both in terms of production and participation?

Chanel holds a minority stake in Bell & Ross and brings a wealth of expertise. For example, they are very strong in the legal field. Chanel’s approach to us is “collaboration without obligation”. What I find remarkable is that they really have a long-term vision of luxury. They are giants with an artisanal core, avoiding the standardisation or the dilution of the brand. Theirs is a good example to follow.

THE WATCH FILES The Pequignet factory in Morteau has been taken over by French investment fund Enowe, which aims to revitalise national “houses of excellence”. Although it (...)