As we have seen in recent days, football is more than just a business: it is a living, breathing piece of collective heritage that belongs as much to its fans – who have defeated the plan for a private European league – as to the clubs. This lesson also applies to watchmaking, as the love of watches is certainly as strong as that of football. Watch brands are the guardians of a priceless legacy of knowledge and know-how, nurtured over generations of ingenuity and cherished around the world. What goes with that is collective responsibility.

As we have seen in recent days, football is more than just a business: it is a living, breathing piece of collective heritage that belongs as much to its fans – who have defeated the plan for a private European league – as to the clubs. This lesson also applies to watchmaking, as the love of watches is certainly as strong as that of football. Watch brands are the guardians of a priceless legacy of knowledge and know-how, nurtured over generations of ingenuity and cherished around the world. What goes with that is collective responsibility.
A

s a football fan, I, like millions of fans around the world, have been following the sorry soap opera of the European Super League (you can find a summary of the saga here), which has delivered a salutary dose of lessons with relevance far beyond the world of football.

As a reminder, in the midst of the pandemic, twelve of Europe’s richest clubs, from Real Madrid to Juventus to Manchester United, whose finances have been hit by the coronavirus, announced their intention to set up their own private league, without inviting the less fortunate clubs. In other words, this was to be a separate organisation from the current Champions League, in which even the Swiss – who are better at watchmaking than at football – are lucky enough to see some of their clubs take part (and where FC Basel has given us some great nights!).

For a Liverpool fan, when you mess with his club, you mess with the identity of his city, his own identity, that of his parents and grandparents. That was totally underestimated by the clubs’ owners.

The project, which was developed over several months behind closed doors by the owners of these clubs, without any external consultation, was crushed in less than 48 hours, in the face of a general outcry: the fans mobilised en masse, on social networks but also physically (in front of Chelsea’s stadium in London, for example); the press was outraged, as were the players and managers – even they had not been invited into the discussion! Manchester United legend Gary Neville gave a memorable speech: “I’m absolutely disgusted!”

One after another, the “secessionist” clubs announced that they were dissociating themselves from the project, and tried to put out the fires with communiqués and pathetic excuses. No doubt the episode will leave its mark on the wounded hearts of many fans, who will not soon forget it. It was a total disaster, a failure so epic that it even put a positive shine on UEFA, organiser of the Champions League...

Many people are wondering how the owners of these clubs could be so out of touch with the history of European football and that of their own clubs that they thought their initiative would succeed. While they were probably prepared for negative press coverage, they clearly did not foresee the extent to which public opinion – sporting, political, social, cultural and economic – would unite in opposition to a project whose motives were primarily financial, and which went against the sport’s core value of inclusion.

Many people are wondering how the owners of these clubs could be so out of touch with the history of European football and that of their own clubs that they thought their initiative would succeed. 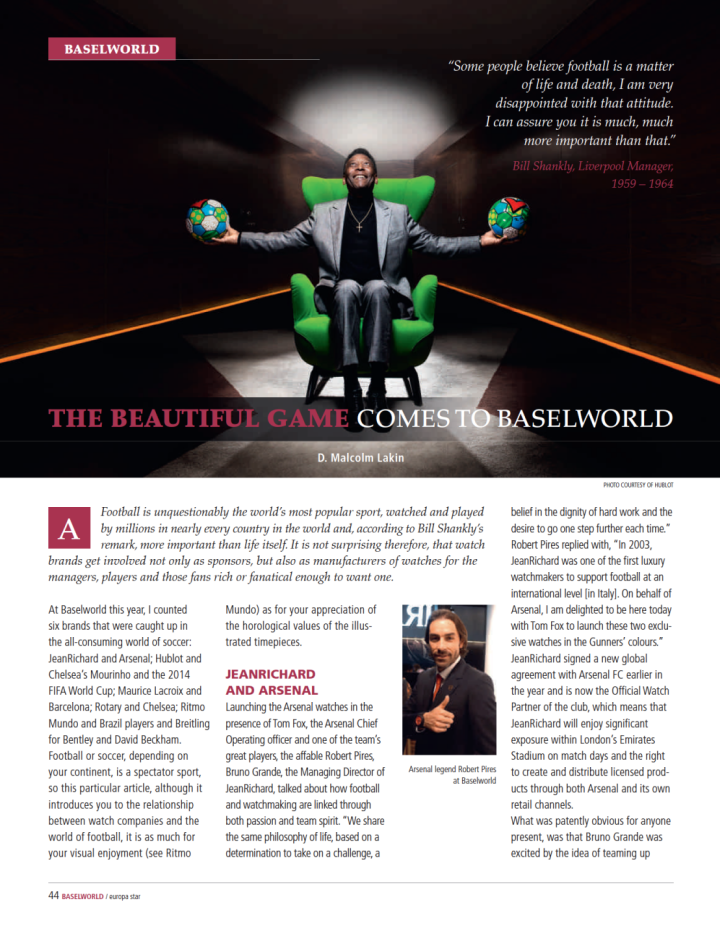 A 2014 Europa Star article on the links between watchmaking and football. A shared passion: “Some people believe football is a matter of life and death, I am very disappointed with that attitude. I can assure you it is much, much more important than that.” (Bill Shankly, Liverpool manager)

What does this have to do with watchmaking? Europa Star is not a football magazine. But this modern-day fable has a disturbing resonance with the theme of our new issue, devoted to the emergence of a new public voice in the watchmaking industry. We can see this, for example, in the major stir that any new model launched by an iconic brand can now cause on social networks. But this would be to look at the phenomenon through the smallest of lenses. The ‘digital bashing’ observed here and there actually reveals the dynamism of this new public opinion, the vigour of the communities of amateurs and collectors – the fans, in other words – who will have their say, when the watchmaking dialogue has hitherto taken place essentially between the brands and their representatives.

Everyone can now lay claim to their own specific approach to watchmaking, develop a singular vision, and even proclaim themselves, more or less legitimately, “guardians of the temple” for a particular brand. Several communities are even very well organised and maintain a constant dialogue with the brand they follow, like the Paneristi – read our article on this subject here.

As with football’s Super League, this all raises a fundamental question: who “owns” watchmaking, which UNESCO recently recognised as part of the intangible heritage of humanity?

As with football, this raises a fundamental question: to whom does watchmaking “belong”?

The owners of watch brands have inherited a priceless collective treasure of knowledge and know-how, nurtured over generations of ingenuity and cherished by communities of fans around the world. Clearly, they operate within the broader framework of an important cultural and social responsibility. The heritage they manage on a daily basis is meaningful to large communities of fans.

In the same way, for a Liverpool fan, if you mess with his club, you’re messing with the identity of his city, his own identity, that of his parents and grandparents. “You’ll Never Walk Alone”, the club’s anthem, is more than just a charming piece of folklore – something the club’s American owner completely underestimated as he was forced to engage in a difficult session of self-criticism with the fans. The anthem is indeed a piece of living heritage, given the symbolic importance attributed to it by tens of thousands of people. It is interesting to note the lack of cultural knowledge of some owners.

If there is anything that watchmaking – which is proving to be just as lively and global a passion as football! – can learn from this episode, it is that it’s all the more important to protect and safeguard the industry’s precious collective heritage. It’s a cultural, economic and social legacy that goes far beyond mere financial considerations.

Within the industry, we also have our own watchmaking fables that illustrate the importance of respecting this heritage, which is appreciated by so many fans throughout the world. In a twist of history, Zenith, like Liverpool today, was owned in the 1970s by an American who also decided to wipe the slate clean and rebuild the brand’s identity on the basis of electronic watchmaking – a disastrous strategy that led to the company’s liquidation.

Fortunately, Zenith’s technical director, Charles Vermot, decided to save part of this doomed heritage, an effort that would lead a decade later to the relaunch of El Primero, the calibre that today represents the identity of the brand and, beyond that, of Swiss watchmaking. It’s also a useful parable about how the effort of one can benefit all.

This makes it all the more important to protect and safeguard the precious collective heritage of watchmaking – a cultural, economic and social heritage that goes far beyond mere financial considerations.

The European Super League adventure also reveals that even historical “enemies” can come together over a common cause, as soon as their deepest identity is at stake. Thus, Manchester United and Manchester City fans, with their unparalleled historical rivalry, joined forces to save what is at the heart of their shared passion. For them, the issue was so fundamental that it went beyond their club perspective.

That is what this episode is all about, and in the end it is very encouraging: the growing, democratic and increasingly direct power of public opinion in the digital age, the primacy of the common good, the cultural and social responsibility of private companies, and the need to include all those who keep a beautiful shared passion alive throughout the world, whether we are talking about football or watchmaking! We will certainly come back to this.