As we did in 2014 with its forebear, the Swatch Sistem 51, we dissected Tissot’s Swissmatic in order to gain a better understanding of what’s “under the hood”, and what technological developments it offers compared with the Sistem 51.

As we did in 2014 with its forebear, the Swatch Sistem 51, we dissected Tissot’s Swissmatic in order to gain a better understanding of what’s “under the hood”, and what technological developments it offers compared with the Sistem 51.
D

enis Asch armed himself with his scientific understanding, his measuring instruments and his watchmakers’ toolkit.

Step one: let’s see how the Swissmatic runs

The watch is handsome to look at, with a classic, understated, almost vintage-looking dial and slender hands. It is light and comfortable to wear, although the clasp of the metal bracelet is fairly basic and not easy to manipulate with one hand. Another point: at 12 mm, the case seems rather deep, given the vaunted simplicity of the movement. But at that price point, it’s probably unrealistic to expect more. The movement has no stop-seconds mechanism, which means the second hand quivers rather alarmingly when the time is adjusted. We’re keen to open it up and see what secrets it conceals inside.Before we do that, however, we use a Lepsi device to assess how the watch runs, fully wound, with the hands set at 12 o’clock. Depending on the watch’s position, the amplitude is rather unstable, but it is unusually low in vertical orientations, varying from 210° to 240° (approaching the minimum tolerance, after 24 hours). As far as keeping time is concerned, performance is perfectly satisfactory – good, even – varying between -4 and +2.5 sec./day depending on position, with an average of -2 sec./day. This gives a delta of 6.5 seconds, not far off the COSC standard. Denis is visibly impressed. “It’s actually quite scary,” he admits. “If you can get results like this with a watch entirely produced and assembled by robots, where does that leave traditional watchmaking?”

On the operating table

We lay it on the operating table and prepare to crack it open. This proves to be far from simple, as there are no notches, but we eventually succeed. On opening the back we discover a special encasing ring made of plastic, the metal rotor and the single screw we were promised in the centre. We unscrew it, lift off the rotor, which is mounted on ball bearings, and discover a single bridge serving as both barrel bridge and gear bridge, made of brass with a black coating. 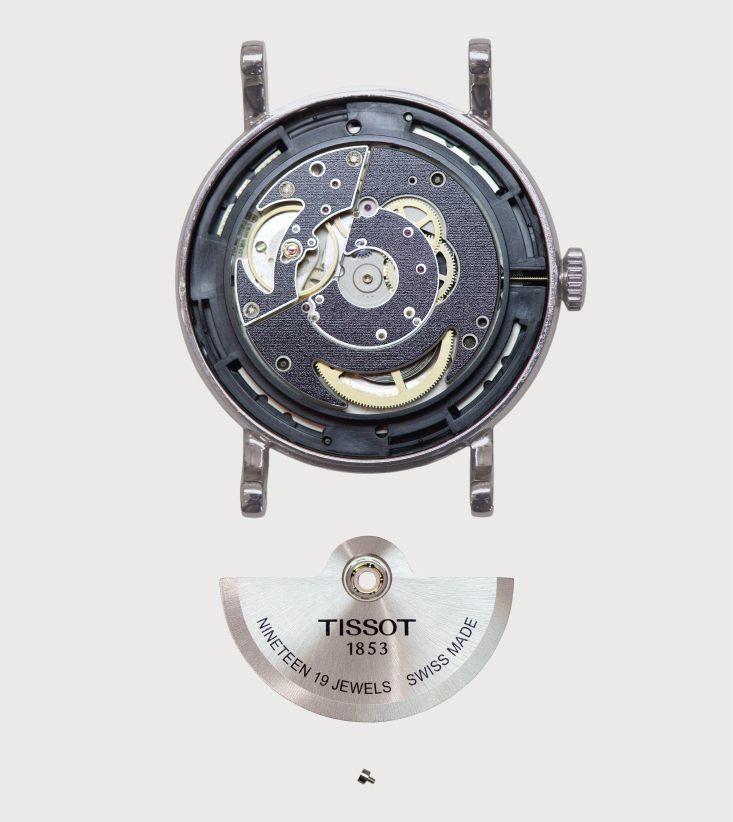 At the very bottom of the picture: the unique Swissmatic screw 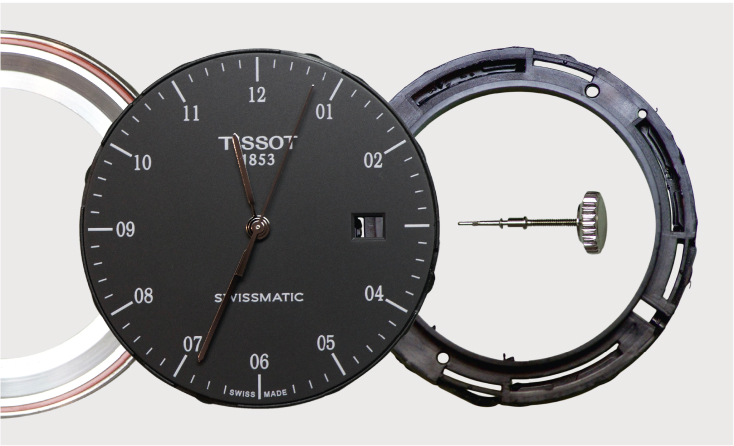 The crown comes away easily and we turn the watch over to remove the hands. “They are very straight, polished, clean and well-finished, even under a loupe,” Denis notes. Next, the dial. Since it is supported simply on two feet resting directly on the encasing ring, it is easily removed (the dial is firmly held in place when the watch is fully cased up). 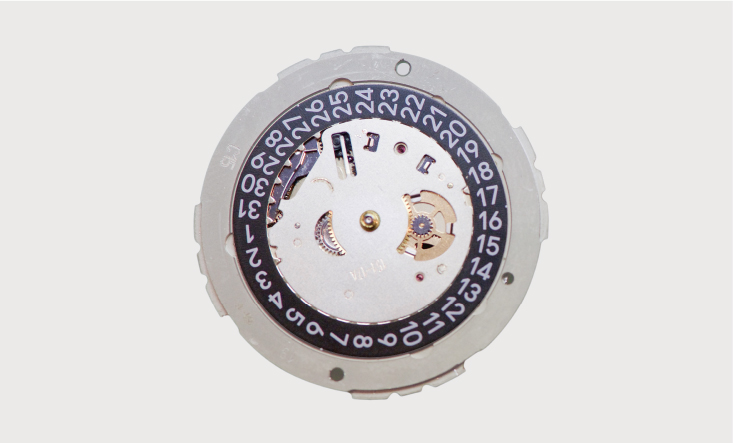 We then try to remove the high-tech synthetic encasing ring. But this is easier said than done, and Denis runs into difficulties. There are no screws, but maybe there’s some kind of catch. Or maybe you just need to have the knack. We end up forcing the ring out of its seating, to discover it is soldered to the movement. “Brute force and ignorance,” notes Denis, who has spent 15 minutes or more on this manoeuvre. 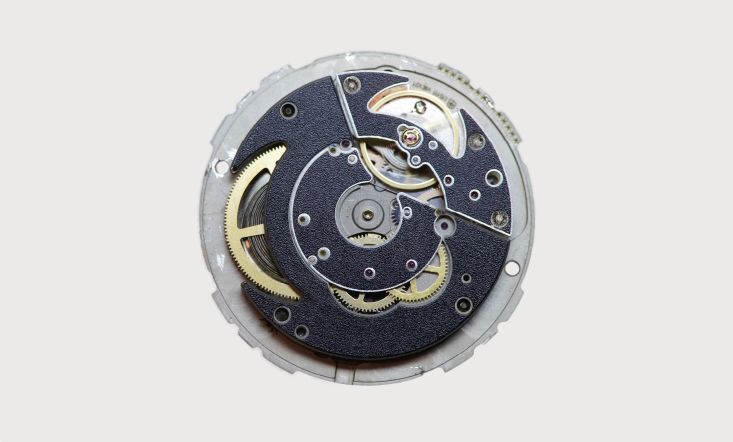 The movement is finally laid bare, and we immediately see that the dial-train bridge is exactly the same as the one in the Sistem 51. So it’s clearly a direct descendant. Looking at the gears, it’s immediately obvious that there are in fact no screws. The bridges, which are pretty slim, are apparently soldered on three small feet. Faced with a “normal” movement, at this point Denis would disengage the pawl from the barrel to access the workings behind. But here there is no way of doing that. So we try a different method, and manage to remove what looks like a balance-cock without causing too much damage. But here the balance-cock and pallet bridge are in one piece, as are the pallet, pallet-wheel and balance wheel. And also the gear train bridge and balance bridge. As in the Sistem 51, the balance spring stud is soldered to the baseplate, and the balance wheel is inverted and also connected to the baseplate. The pallet fork and escape wheel are made of a high-tech synthetic plastic, and the traditional ruby pallets are absent. Fine adjustment of the escapement is done by laser. The fluttering seconds hand phenomenon is due to the absence of a stop-seconds mechanism. 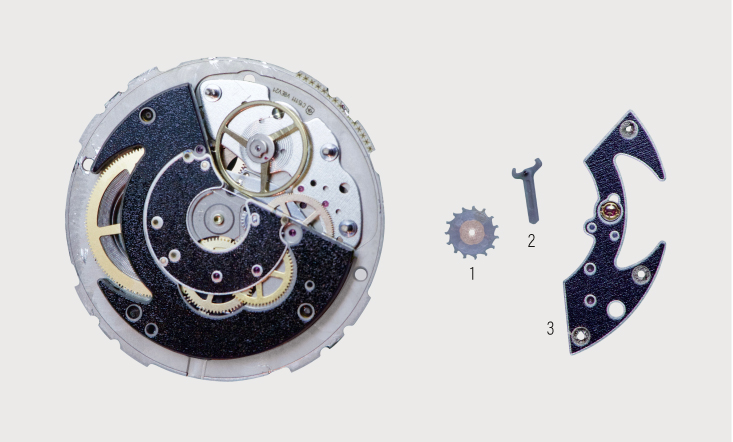 On removing the horseshoe-shaped central bridge, we discover the central gear train and intermediate wheel. The gear train bridge comes away easily; although a little thicker than the others, it is held just by small feet. 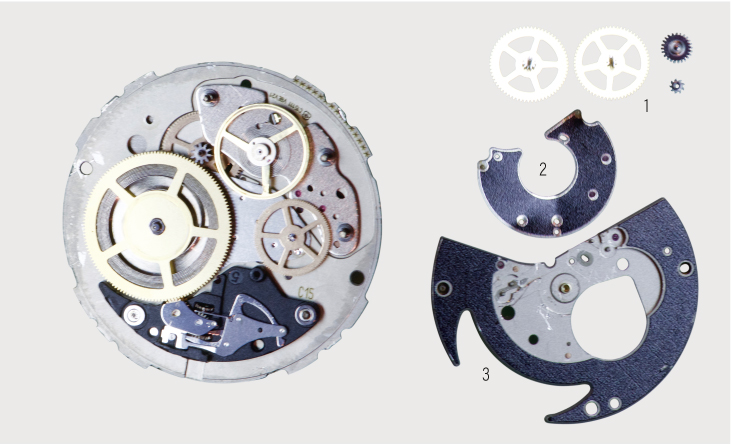 On découvre alors le barillet qui lui aussi est assez rudimentaire. Le couvercle qui le Then we come to the barrel, which is also rather rudimentary. Its cover also functions as the gear that connects it to the automatic winding mechanism, which is how the barrel is wound. “Technically, it’s pretty clever,” observes Denis. “It’s an eminently logical way of reducing the number of moving parts to the absolute minimum.”

We then remove the dial train, which is dismantled from the gear side, while usually the motion-work comes away from the dial side. But here – and this is one of the most striking things about this movement – everything is inverted and grouped together to minimise the number of interventions. We also note in passing that the barrel axle is a simple pivot hammered into the baseplate. As for the balance wheel, given that it is also inverted, the balancecock side, complete with Incabloc or equivalent, is of a piece with a bridge riveted onto the baseplate. 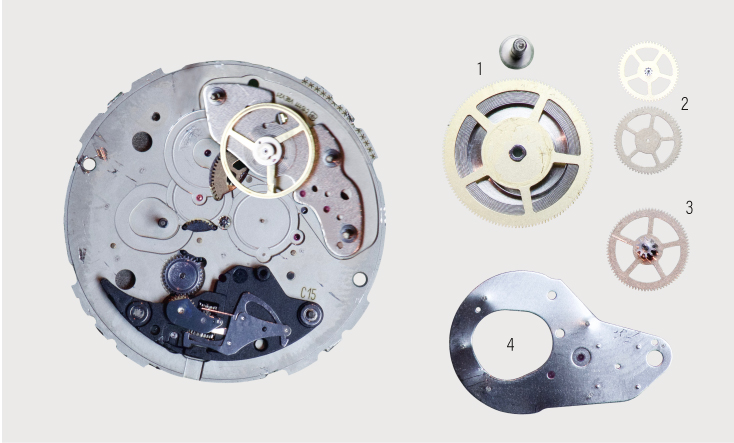 We turn the watch over to the dial side and remove the date disc. As we have seen elsewhere, everything is soldered or riveted. Once the disc is removed we see that the barrel axle, which has to rotate freely, can be easily dismantled. 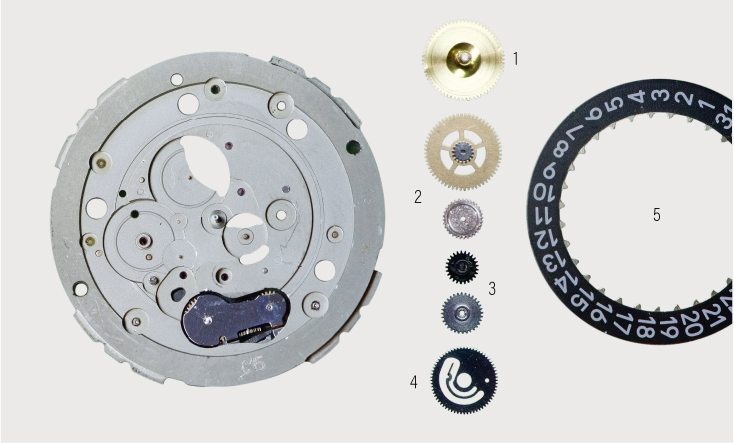 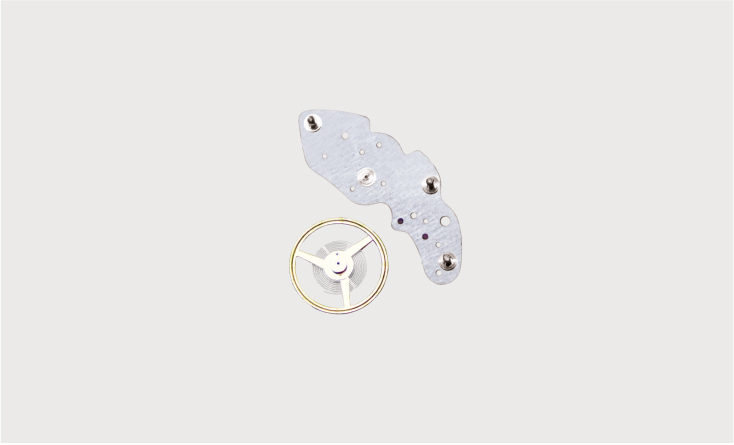 Balance wheel and its support

And we’re done. All the components that comprise the Swissmatic movement have been taken apart and are now spread out in front of us. “When Tissot states that this watch is ‘repairable’, that’s only a manner of speaking. Yes: unlike the Sistem 51, you can open the caseback. But repairing the movement is another matter altogether, because as we have seen you have to bend some of the pieces, damage them slightly, in order to remove them.”

‘Repairable’ should be understood here in the sense of ‘interchangeable’ – you can remove a malfunctioning movement and replace it with a new one! The price of the watch is probably less a reflection of the movement than of the case and finishing.

But Denis Asch is still quite impressed. “It’s brilliantly simple!” he exclaims. “Many of the parts are assembled back-to-front, in traditional watchmaking terms. It’s very clever, very ergonomic. And it works. There’s no reason why movements should not have been designed like this, pre-robotisation. They’ve found the best way of creating an integrated movement. From the outside it looks the same, but because the systems have been inverted, assembly is significantly simplified. And the regulation is relatively good considering how integrated it is. Only the Swatch Group, with all its industrial firepower, could succeed in creating such a rudimentary system – in a good way. You can see how a system like this could be applied to more refined movements, and how it could incorporate other complications, not just the date. It’s just a matter of gearing, but in theory it would be possible to develop a perpetual calendar on this principle, or an annual calendar. Why not? Or a chronograph, or any other complication.

This Swissmatic opens up interesting possibilities, and asks some very important questions. It’s slightly worrying for traditional watchmaking,” he repeats. “It could upset some people. Because the end client couldn’t care less about amplitude. He just wants a watch that keeps good time. Having said that, however, we’ll have to see how it runs over the long term.” And that, only time will tell.