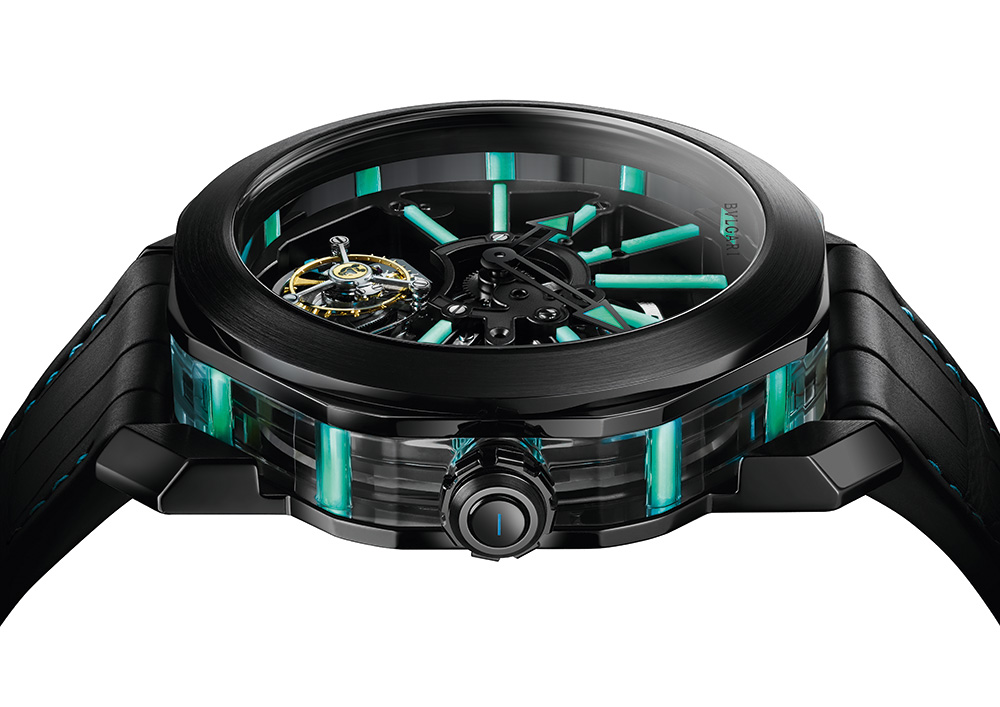 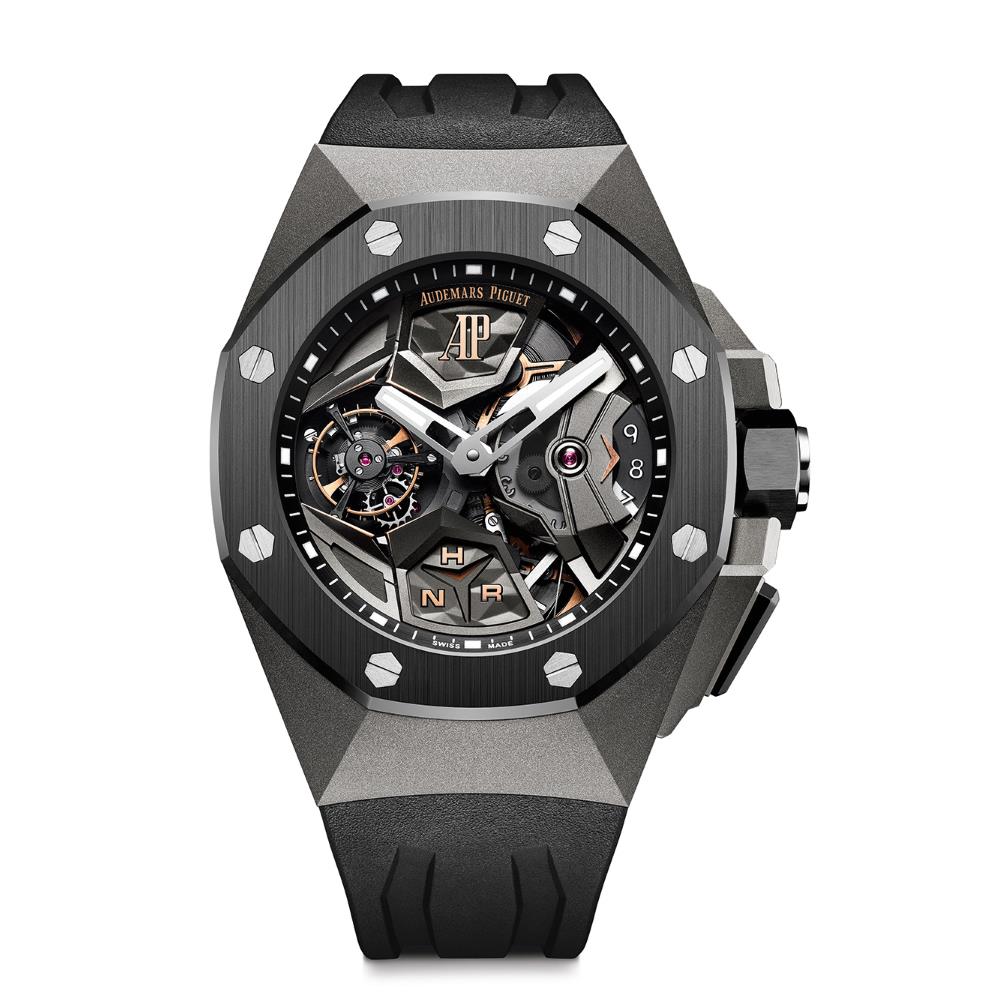 AUDEMARS PIGUET ROYAL OAK CONCEPT FLYING TOURBILLON GMT
A new generation of the Royal Oak Concept GMT with flying tourbillon: the central bridges, originally crafted in ceramic, have been replaced by bridges made of blackened titanium. The case is also crafted in blackened titanium, the bezel in ceramic and the inserts in rose gold. 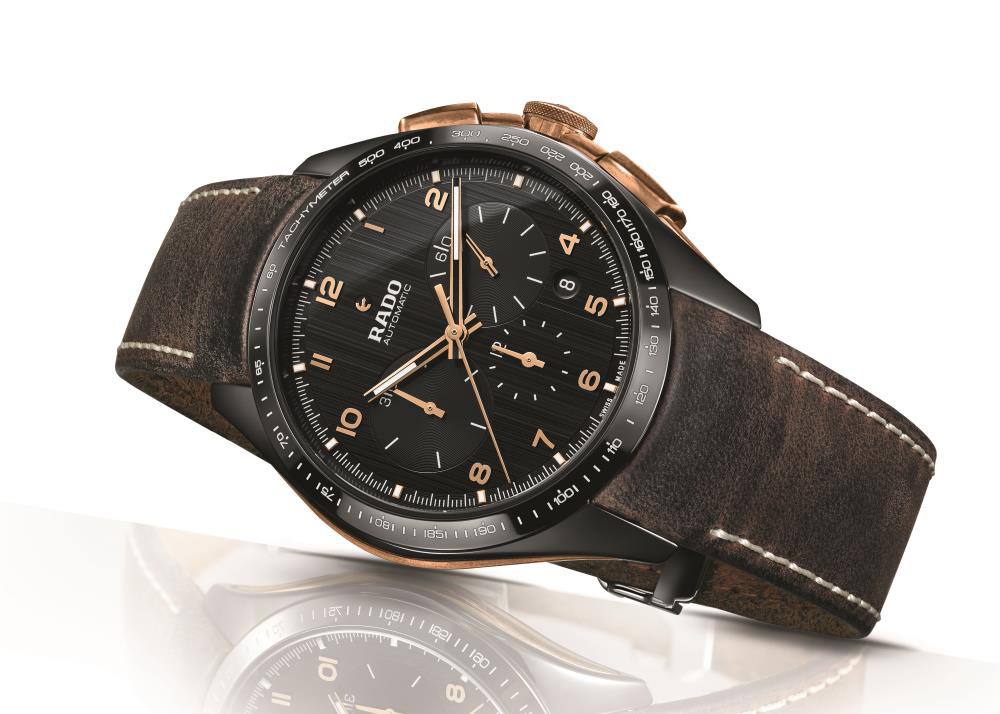 RADO HYPERCHROME CHRONOGRAPH
Big-time contrast for this 45mm Hyperchrome Chronograph in which Rado, a ceramic pioneer, combines an ancient material with a brand-new one: bronze with high-tech ceramic. One takes on a patina with time and the other resists (nearly) everything. A vintage effect for a bright future. 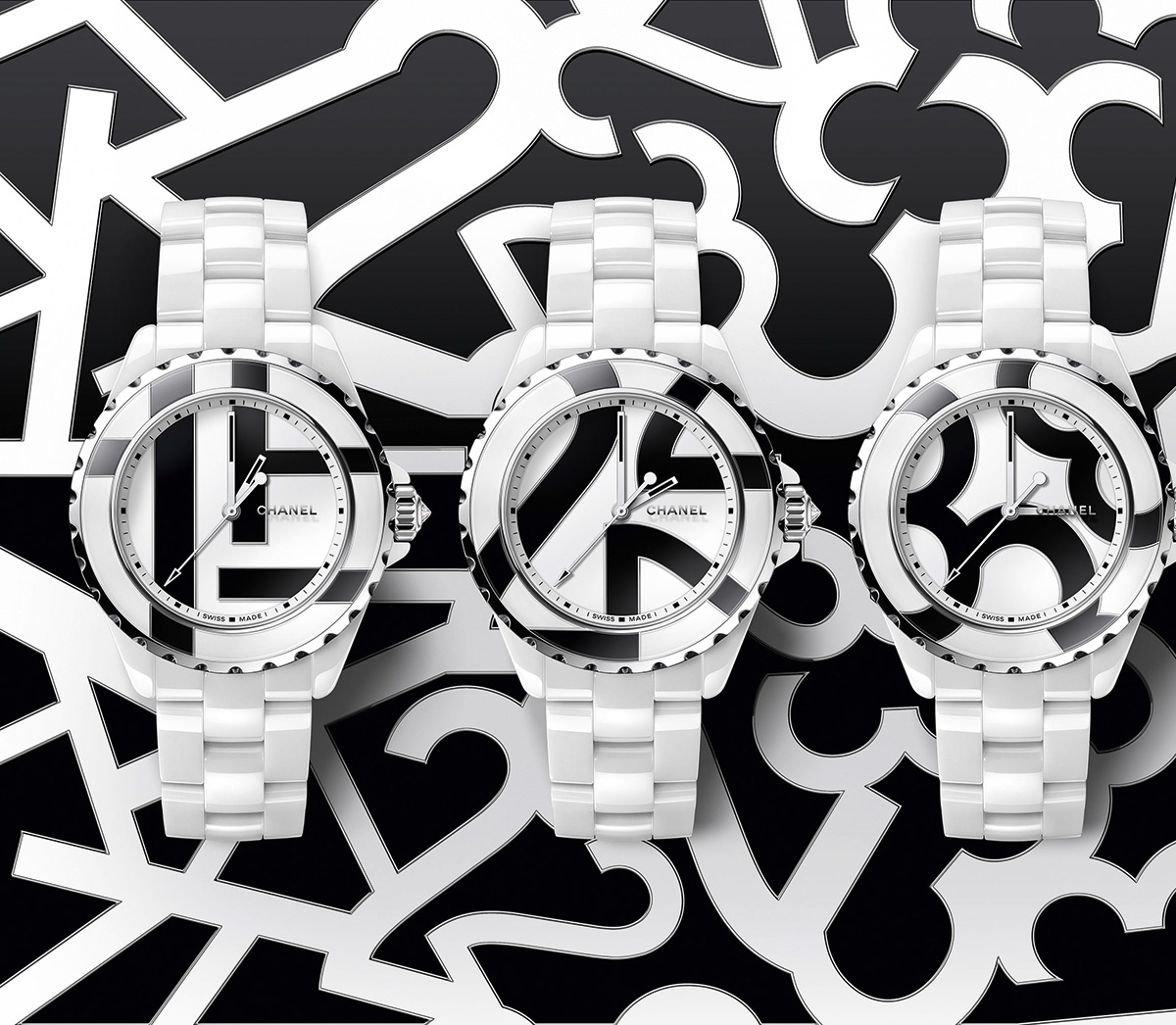 CHANEL CERAMIC MARQUETRY
Referred to as “Untitled 2018”, this set includes twelve unique J12 watches crafted in ceramic marquetry. In deep black against an immaculate background, the shortened digits overlap onto the bezel to which they extend. A demonstration of the watchmaking and artistic heights possible with ceramic. 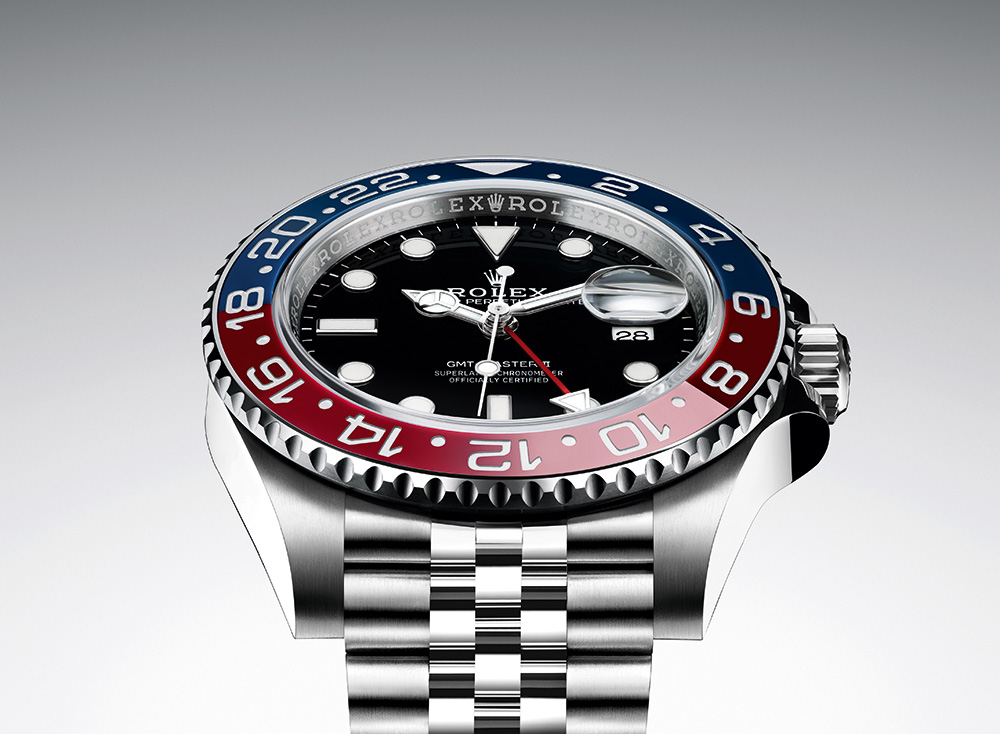 ROLEX GMT-MASTER II WITH TWO-TONE BEZEL
When innovation inches forward without ever changing an icon. In 1955, the graduated 24-hour disc of the GMT-Master’s two-tone bezel – which has since become more than emblematic – was made of plexiglas. In 1959, it was made of anodised aluminium. In 2005, high-tech ceramic arrived on the scene with the GMT-Master II. In 2007, the bezel and bezel disc were crafted from a single piece of what officially became known as “Cerachrom”, the name given to the in-house technology. The digits and graduations are moulded in solid material and PVDplated with gold or platinum. The piece is UV-resistant. 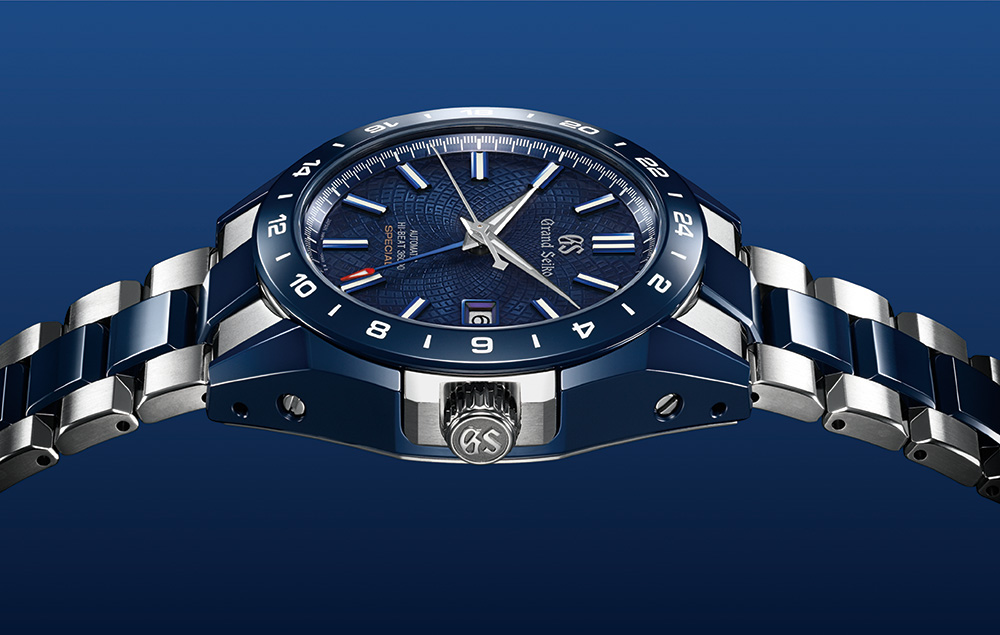 BLUE CERAMIC GRAND SEIKO HI-BEAT GMT
A new, limited edition that harmoniously combines a number of materials: the interior of the watchcase and the exterior of the strap are crafted in high-intensity titanium. The exterior of the case and central links of the strap are made of the new Grand Seiko blue zirconium oxide ceramic (7x harder than stainless steel). Behind the sapphire caseback, the titaniumand- tungsten oscillating mass resists distortion, even if the watch encounters a shock. The titanium portion of the oscillating mass undergoes an anodic oxidation process to obtain this new deep blue hue, which perfectly coordinates with the Grand Seiko blue of the ceramic and dial. 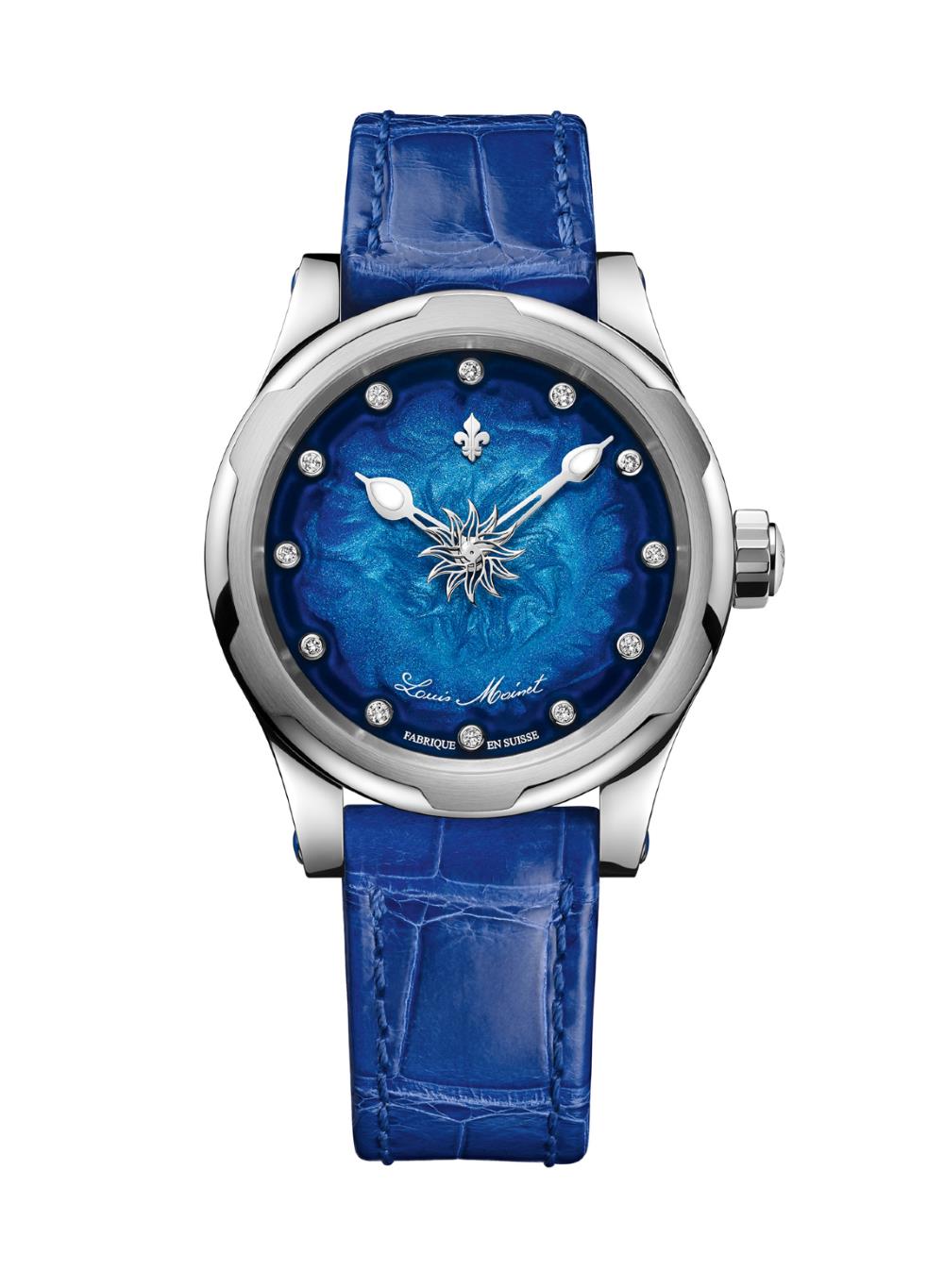 LOUIS MOINET SUNDANCE
Each of the dials in the Sundance collection is unique and manufactured following a method considered by Louis Moinet to be “totally disruptive”. A key element in this process is a powder composed of microscopic particles that illuminate when exposed to the light. The brand will not confirm if differing doses of this chromatic, luminous base are the sole reason for the unique appearance of each dial. Whatever the reason, the intensity of the Sundance’s “disruptive” colours is quite stunning. 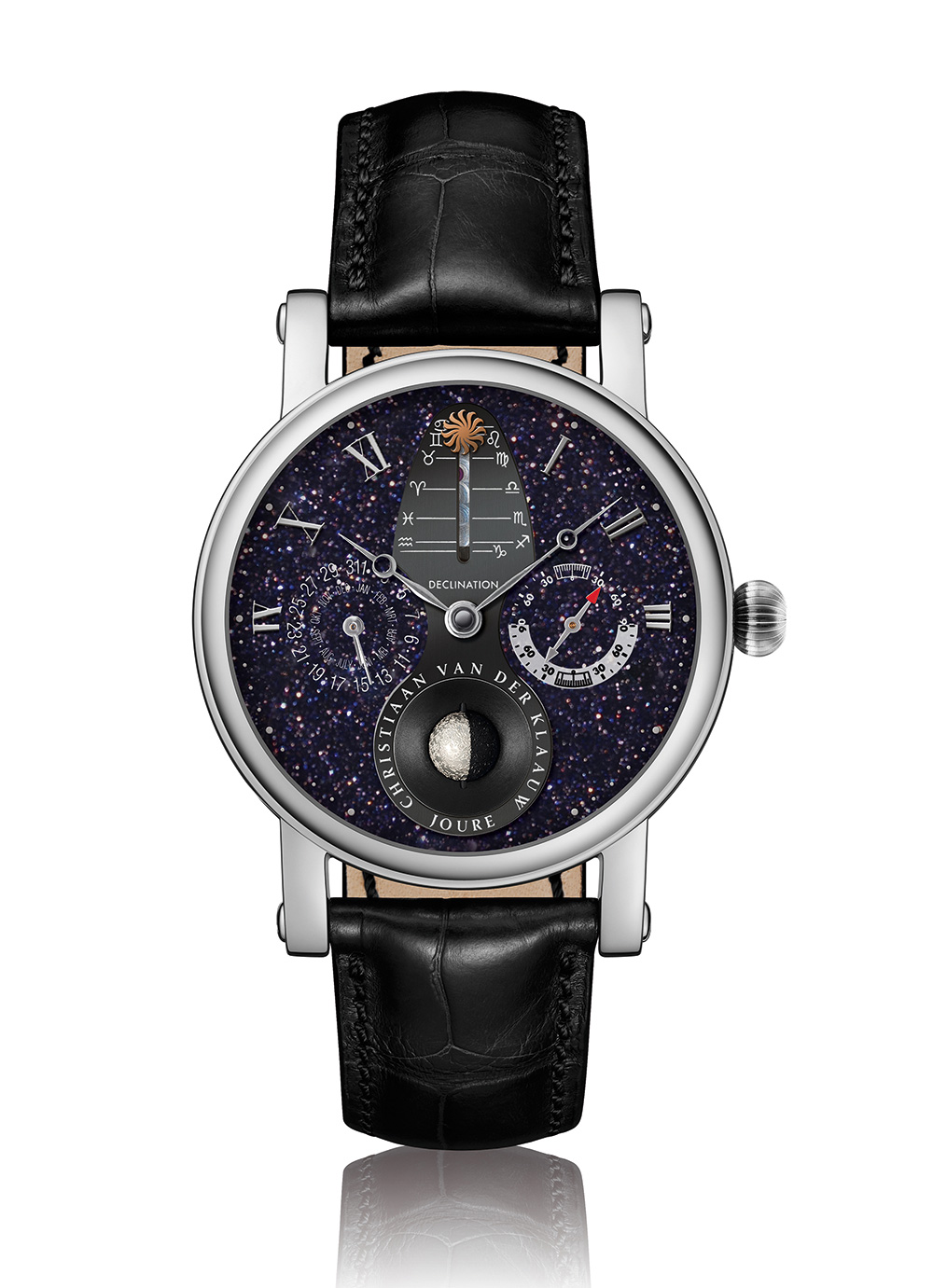 CHRISTIAAN VAN DER KLAAUW REAL MOON 1980 AVENTURINE GLASS
Christiaan van der Klaauw is known worldwide for its astronomical watches. But the atelier is also famous for their Aventurine Glass dials, a real Van der Klaauw signature used since the early years of 2000. Why is an Aventurine Glass dial so special? It changes with the light. It can be subtle and dark, it can be a little bit sparkly, and it can be just amazingly alive with an incredible depth, creating a true almost three-dimensional starry sky. Aventurine Glass is a very difficult material to work with and therefore very expensive. The process of making it is a well kept secret, creating a starry sky around the brand’s astronomical complications.

CENTURY EMPIRE
The octagonal faceted sapphire watchcase dates from 1988. A pure, simple design that never goes out of style. Hand-cut and polished, the design is back in the deep colours of lapis lazuli. The material is captured between two layers of sapphire, magnifying the radiance of the blue and perfectly protecting it. This unprecedented technique offers a thousand creative possibilities, including the use of the most fragile materials. Yellow gold, satin, quartz movement. 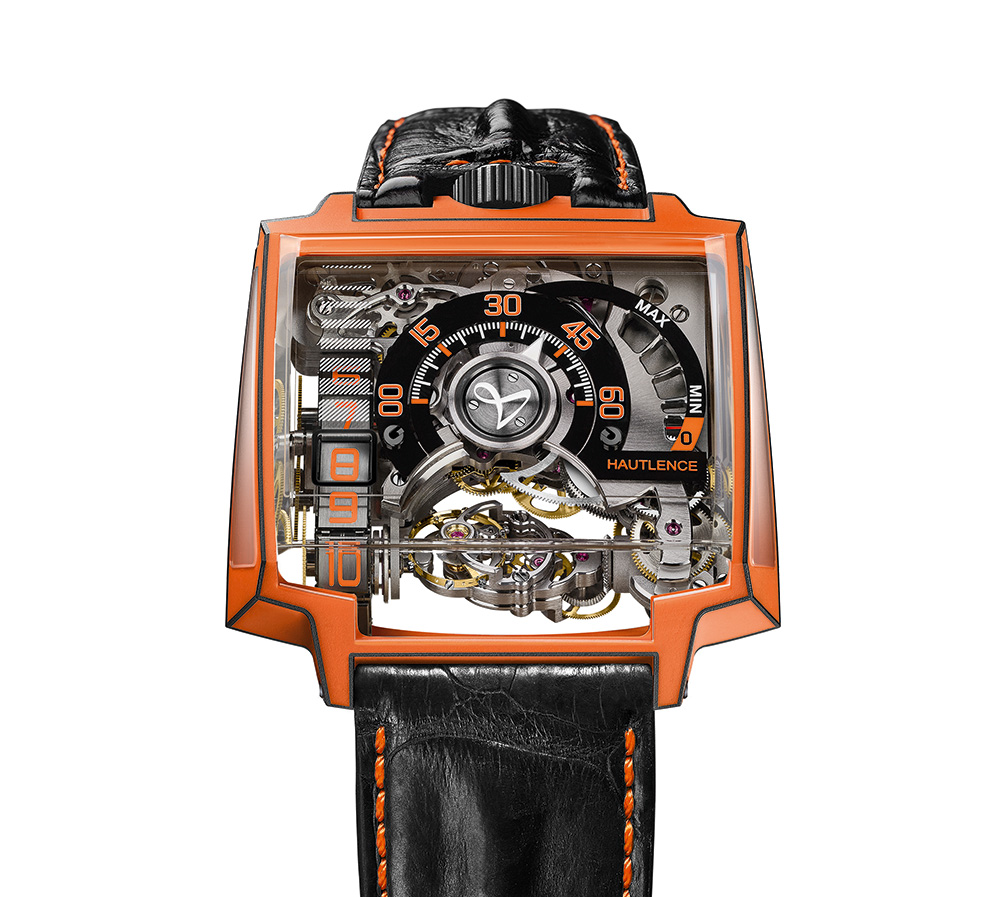 HAUTLENCE VORTEX GAMMA MAGMA
To decorate its Vortex Gamma Magma model, Hautlence has chosen HLLightColor, a composite material borrowed from the automobile and aerospace industries. Charged with ceramic nanotube particles, HLLightColor possesses the strength and other properties that are identical to the metals used in the watch industry, all the while being four times lighter than titanium. It can be worked with the same precision and the same tolerance, and allows for complex finishes, alternating between brushed, polished and sanded surfaces. Additionally, this material opens up a huge range of possibilities from an aesthetic point of view. With a full-body tint, the HLLightColor comes in a wide variety of colours, like this Vortex Gamma Magma in orange. 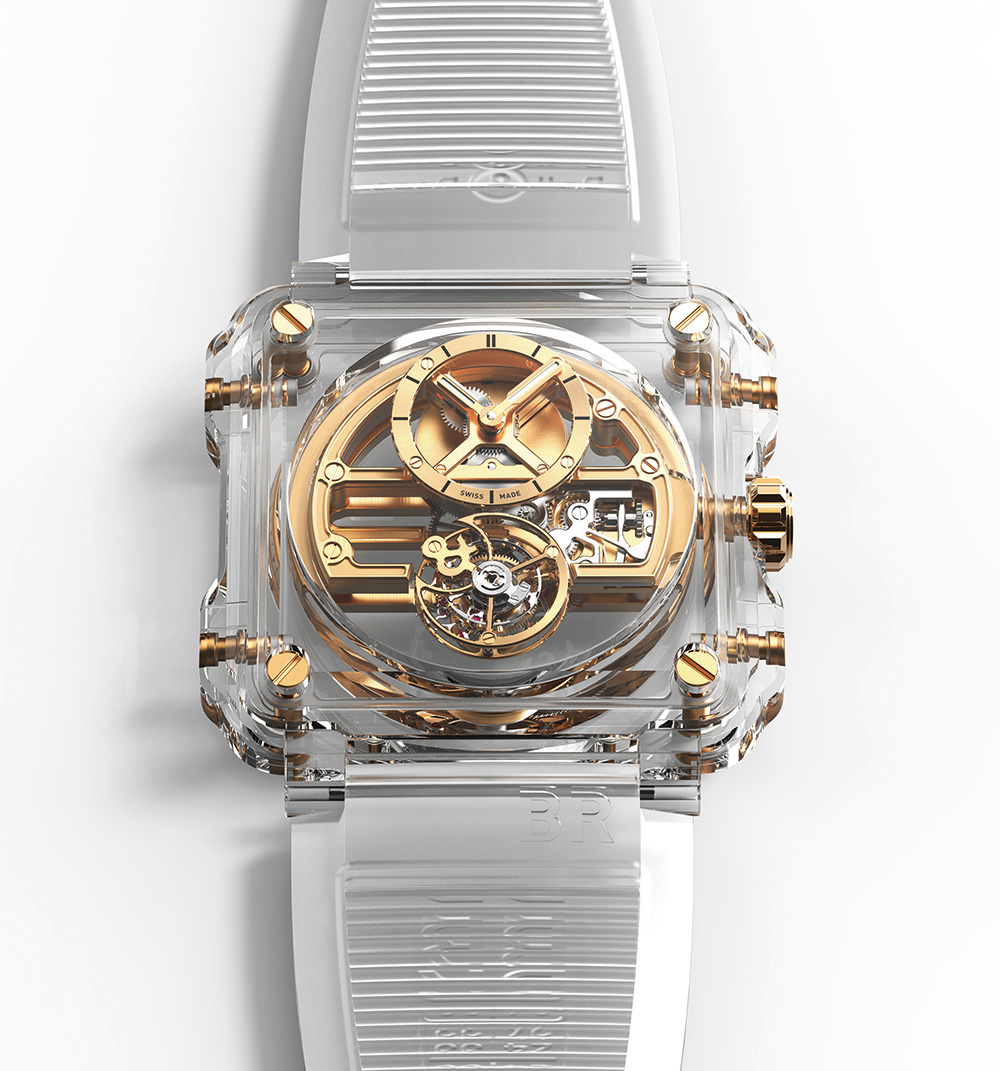 BELL & ROSS BR-X1 SKELETON TOURBILLON SAPPHIRE
The case of the BR-X1 Skeleton Tourbillon Sapphire is crafted from five blocks of sapphire that are carefully machined before being screwed together with the greatest precision. The flying tourbillon bridges are fully openworked, and the dial is set offcentre to afford the best possible view of the movement. Just three unique pieces will be presented – including two exclusively sold online – in three different shades, each used a single time to colour the baseplate, bridges, dial, hands and tourbillon cage. 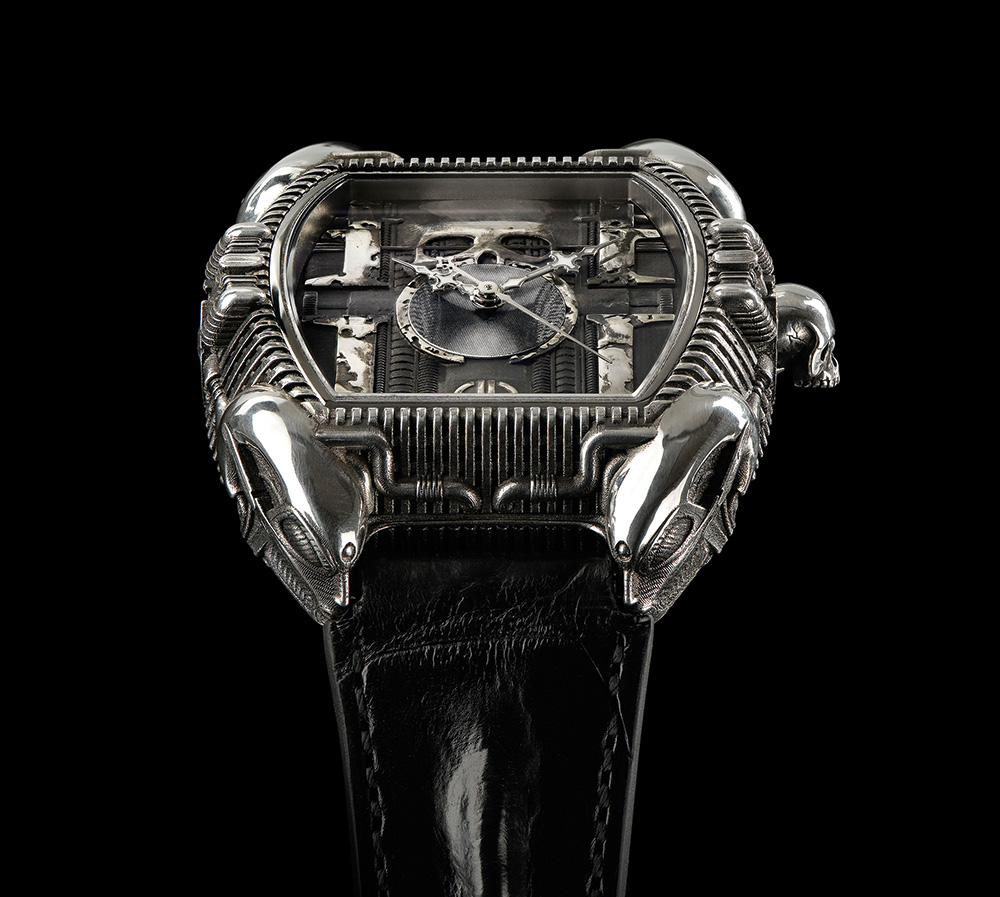 STROM AGONIUM “IN MEMORIAM HR GIGER”
Silver is not a new material; it is as old as the Earth itself. Though it is not technologically advanced, is neither a miracle powder nor a composite, nor is it resistant to tarnishing, it alone allows for the sculpture of truly three-dimensional items, Gothic cathedrals for the wrist, hand-made pieces that would be impossible to create with any other metal. Antique materials still have some life left in them! HR Giger, the creator of the creature from Alien, would not have denied this. Prior to his death in 2014, he worked on this piece with his friend Daniel Strom. In memory of this friendship, three years later, Strom released this joint achievement, named the “In Memoriam HR Giger”, of which only 99 units exist. 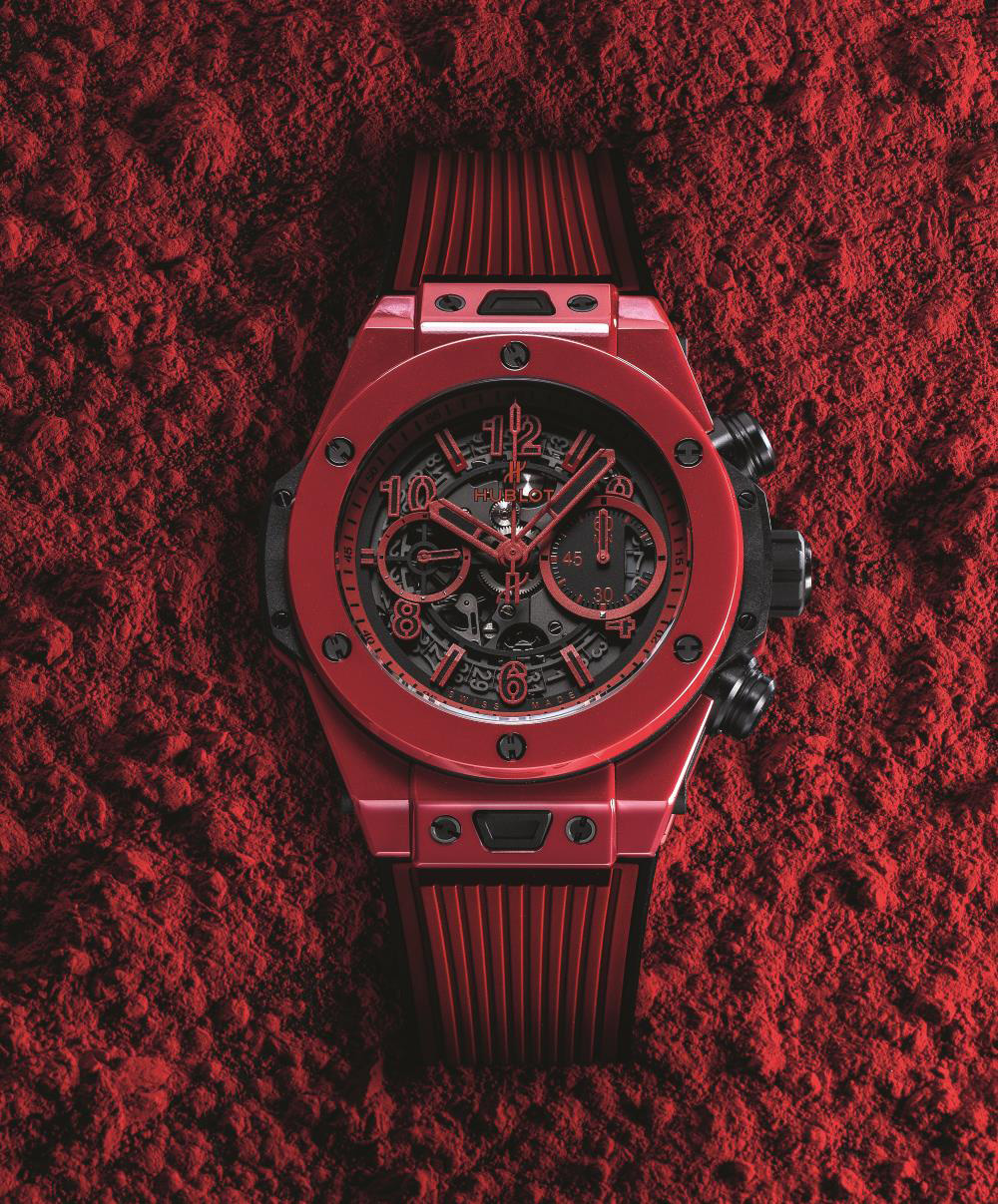 HUBLOT BIG BANG UNICO RED MAGIC
After the Magic Gold in scratch-resistant 18-karat gold, meet Red Magic, the brainchild of the Hublot Manufacture R&D centre. Its exceedingly strong ceramic boasts a more-thanlively colour and is protected by a series of patents: the exact formula remains confidential. 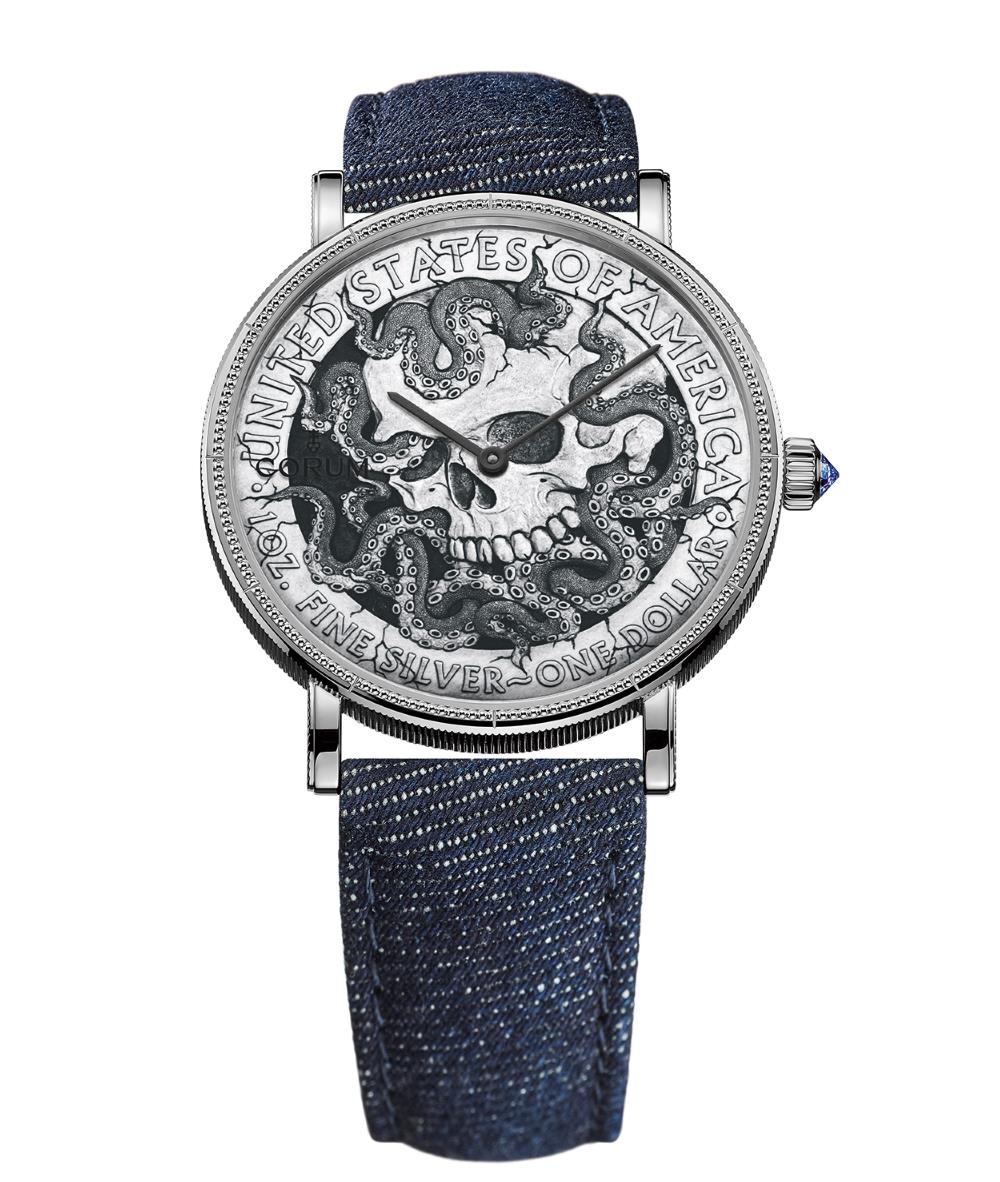 CORUM HOBO COIN
Nickel, the humblest of metals, used since 3500 BC, cannot really be considered an advanced material. But Russian engraver Aleksey Saburov has brought it back to life in a novel fashion, along with its history, by re-engraving rare hobo coins, named as such as they were the smallest of small change, created in nickel by travelling workers who wandered the United States in the wake of the Great Depression. He has added his own twist to the legend in popular images from the time to create micro sculptures that each become the unique dial of a Corum Hobo Coin. 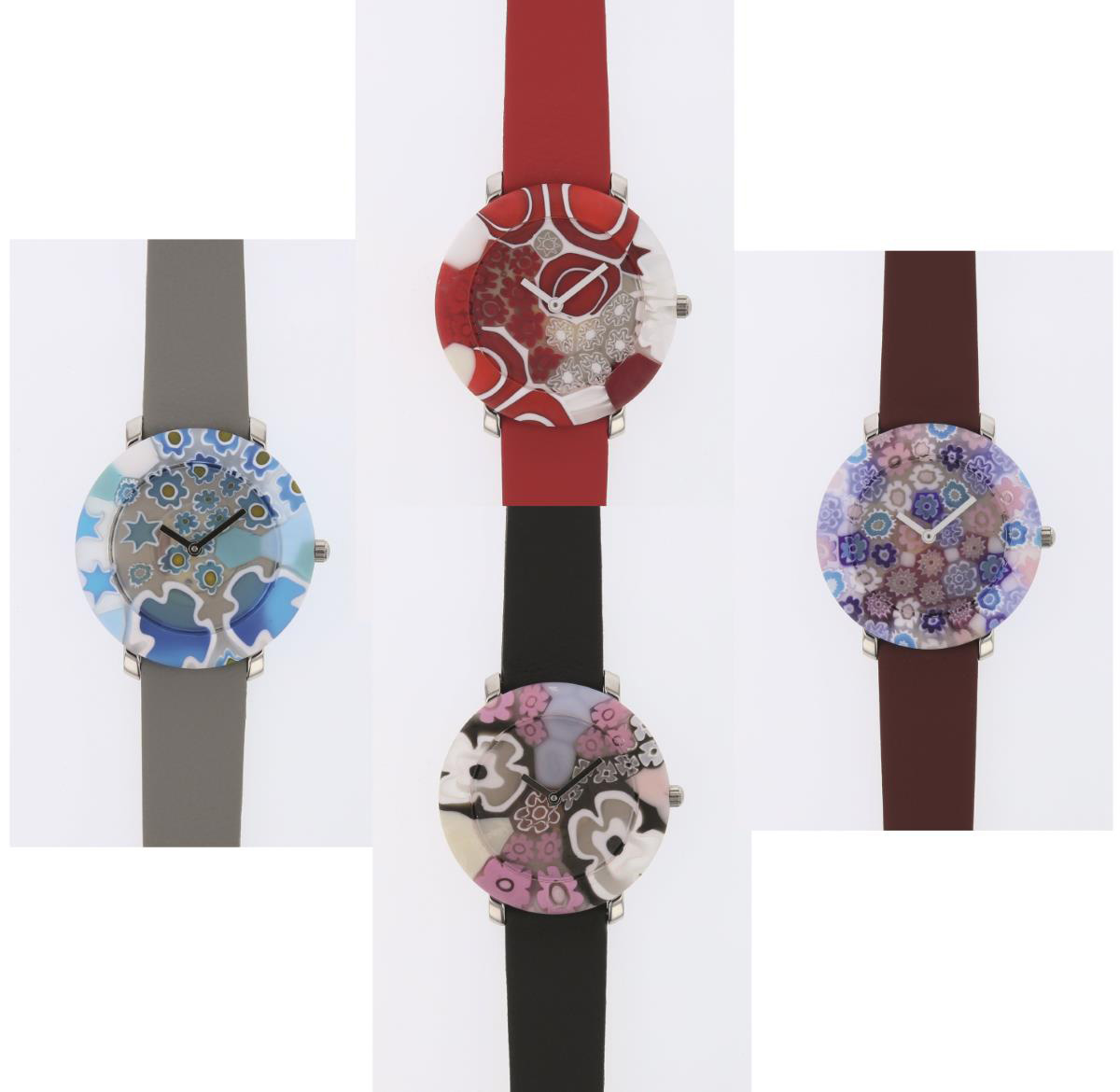 YUNIK LADIES
Since the 13th century, the glassmakers of Murano have trained among Venice’s richest families. Masters of a skill then considered to be high-tech, they pushed the art of glassmaking to its very limit. Each glass has unique colours and patterns, just like each Yunik Ladies watch, the dials and cases of which are made from authentic Murano glass. It is as much a gift from sand as it is from the master-glassmakers. 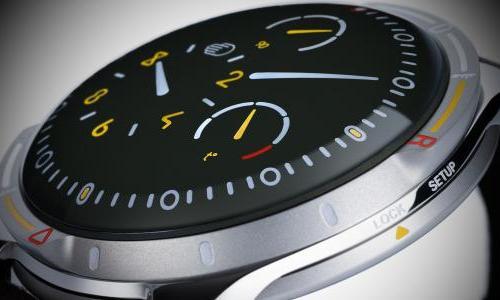 Ressence was born in 2010 with a clear purpose in mind: improving the function of the mechanical watch in the 21st century context. After refining (...) 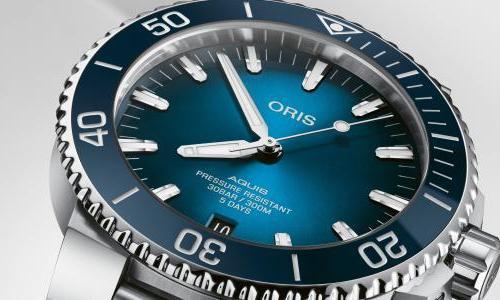 Oris introduces its latest Aquis Date diver’s watch. The most striking fact is that it is the first timepiece powered by the brand new Calibre 400, (...)