If you snooze, you lose! A selection of 5 vintage alarm watches that you could wear everyday and won’t cost you a fortune.

If you snooze, you lose! A selection of 5 vintage alarm watches that you could wear everyday and won’t cost you a fortune.
S

ome say that eating a light dinner, going early to bed and avoiding screens late at night allow for deeper and more regular sleep, and consequently favour a smooth awakening.

However, for the night owls and the screen zombies that we sometimes are, waking up remains a daily struggle.

Whether it is the crowing of the cockerel, the officer’s bugle, the church bells, the knocker paid for by the factory owner or simply your mother violently opening the curtains, we’ve always found ways to force our bodies to face the sunlight and our daily tasks.

In the 20th century, this responsibility became our own, thanks to the personal alarm; and what a luxury it was, setting the precise time at which you were going to face the reality of your life – a game changer!

Sure, we could look at table alarms or pocket alarms, but let’s focus on the kind that can actually be worn on a daily basis: wristwatch alarms.

Vintage wristwatch alarms are truly dress watches; most of them share certain aesthetic features, among them a clean dial, two crowns, thin lugs, a moderate size and elegant designs.

While the Jaeger-LeCoultre Memovox is famous thanks to its modern iterations and the recently launched Memovox line-up at SIHH 2018, let’s consider some alarm watches that are less iconic while being original and, most importantly, affordable.

Let’s start with a Japanese watch. The Seiko Bell-Matic was made in a variety of case types and designs, but its construction and movement, as simple as they are, offer an elegant and balanced combination. The simplicity and purity of the dial reminds me of some 1960s Grand Seikos that were built for robustness, elegance and balance. The way the alarm is set is subtly hidden along the chapter ring, identifiable by the little black triangle that points to the alarm time, and the sharper lugs of the reference 7010 make it a beautifully laid out dress watch. The rudimentary yet robust automatic calibre 4006A additionally displays the date, the day and of course the alarm function that rings as loudly as a cicada from the South of France.

In the reference ending with 7020, the sharper lugs were swapped for a more rounded case, in line with the 1970s trend. To my mind, these Bell-Matics became too bulky, and lost some of the charm that defined the early references.

7010 references can still be found for under $500, with great examples starting at $250-300, representing incredible value for money.

Some other references are even more affordable and feature funkier designs and colourful dial variations. They can be found at around $100-150... the price of a couple of plastic quartz Swatches!

Sharing the same whale logo as the Sea-King range, the Bulova Wrist Alarm is a funky yet elegant timepiece. The serpentine (snake style) hand with the red arrow pointing at the alarm time is a cool and original touch that, combined with the whale logo, adds an unconventional look and feel.

Using the 11 AERC calibre, a manually wound in-house alarm movement, the watch comes in a classy case with thin lugs that are somewhat reminiscent of 1960s Jaeger-LeCoultre Memovox watches. A second crown is used to wind and activate the alarm, while the main crown sets the time and winds the watch. 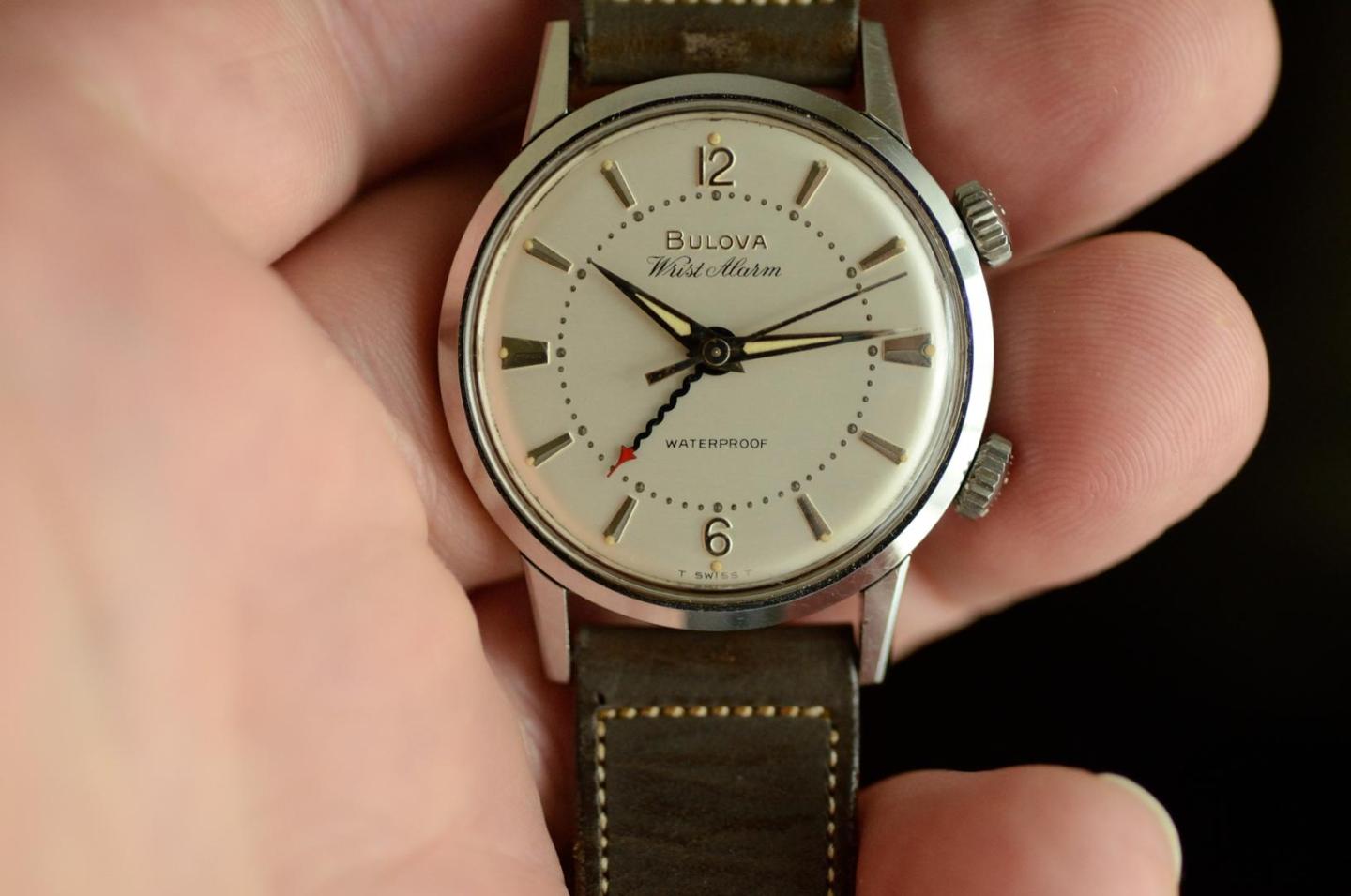 Although it is 100% original, this Bulova Wrist Alarm does not feature the whale logo

With prices fluctuating between $500 to $1000, the Bulova Wrist Alarm watch is an interesting timepiece. While it may not be appreciated by everyone, it certainly has originality, while retaining the aesthetic features that still make it a classy and dressy watch to wear.

This piece breathes elegance, from its thin hands and light font logo to its sophisticated aperture for the alarm with light blue numerals. The dial itself does not feature numerals and goes straight for the essential, while maintaining a certain level of gracefulness. It’s the kind of watch that would go perfectly with a discreetly elegant suit, retreating behind the shirt cuff and occasionally popping out to reveal itself every hour.

The manually wound 1475 calibre borrowed from the A. Schild catalogue was modified by Girard-Perregaux to display the alarm setting in a rather unusual way.

What a lovely piece! The Swiss brand could take some inspiration from it and offer a true legacy to this delicate design in its modern portfolio… 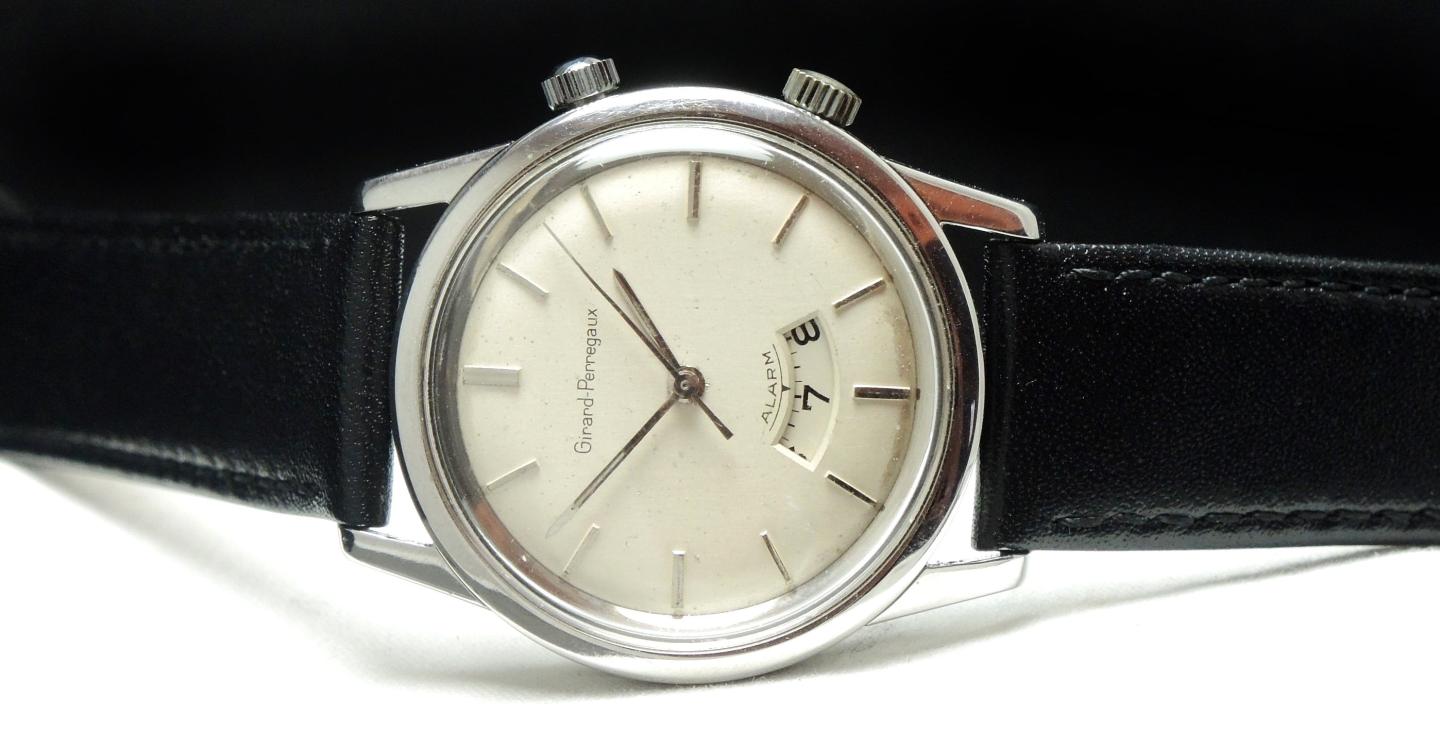 As far as price is concerned, you’ll be able to find a Girard-Perregaux Alarm in reasonable condition around the $1000 mark.

I know that I wasn’t supposed to talk about iconic alarm watches, but it proved impossible to avoid mentioning the Vulcain cricket! Some crickets can be found at really interesting prices, if you consider how famous the collection is.

Sometimes nicknamed the “Presidential Watch”, after several Heads of State (Truman, Eisenhower, Johnson, Nixon, Gorbachev and even Obama) were seen wearing one, these watches became the first to really showcase and amplify the famous cricket sound, by using the case as a sounding board.

The complication was a hit as soon as it was launched, and soon became an amusing object to brag about, and with which to impress colleagues or friends, while surprising them with that strident insect sound.

Various iterations were produced, resulting in a large number of different dials, case materials and designs. When looking for a Cricket watch, avoid those with chromed cases, as they tend to deteriorate quickly and don’t hold their value like the stainless steel timepieces do. 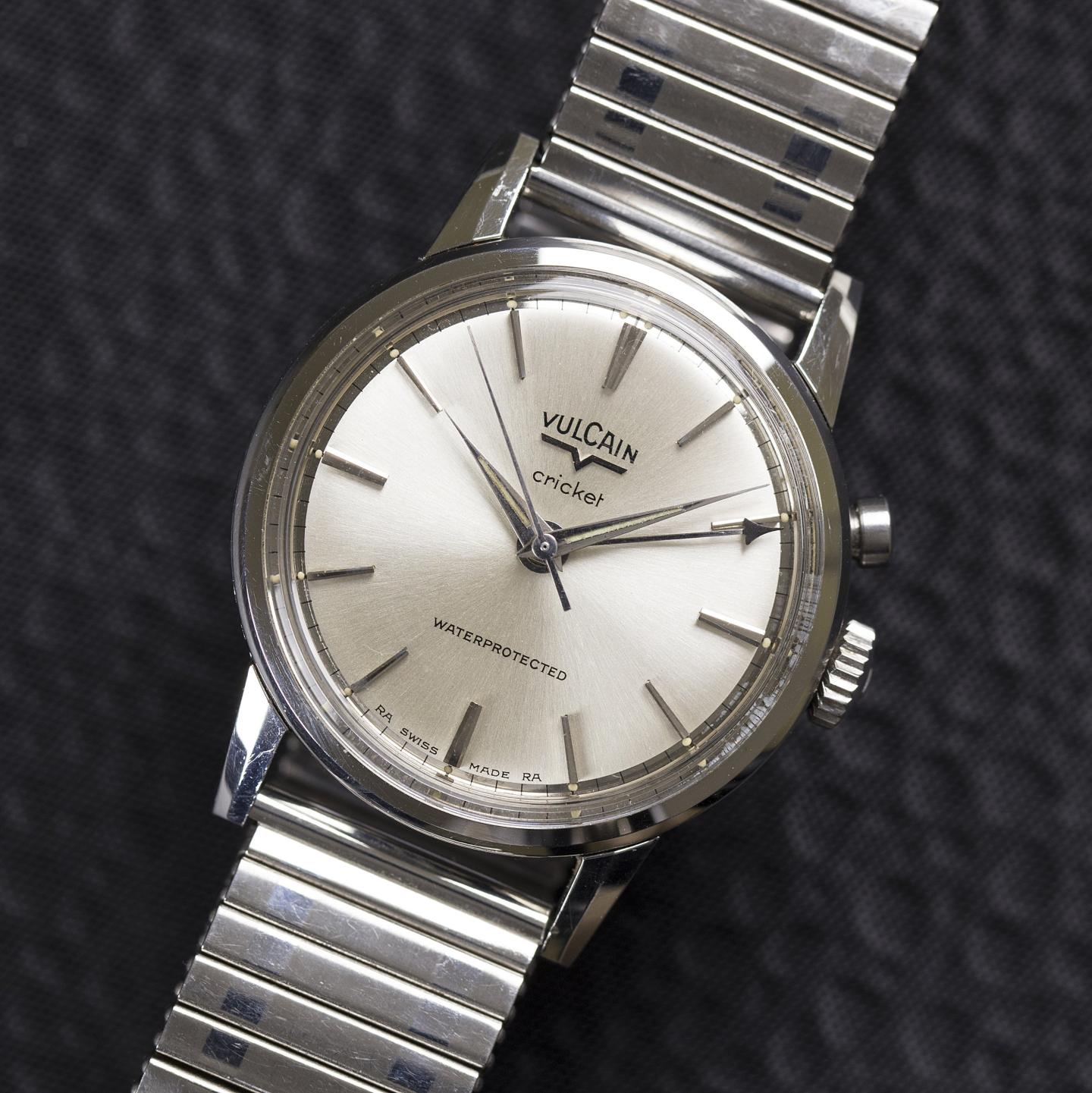 If you take your time, you could find a Cricket priced sensibly at around the $500 mark. After all, around 100,000 pieces were made under the Cricket name, and the watch remains a bestseller for Vulcain even today. Again, staggering value for money when you consider the history of the Cricket line.

We started with a Japanese watch, so let’s end this selection with a sibling. The Citizen Alarm range is nevertheless a long way from the typical Japanese aesthetic codes.

As is usual with Citizen, the 21-jewel calibre was designed and produced in-house and aimed at offering quality and robustness at a more attractive price than Swiss competitors.

Somehow, it feels as if a Rolex Datejust and a Jaeger-LeCoultre Memovox had a child together, and against all odds, the result, in my opinion, is pretty homogeneous and rather successful.

The fluted bezel enhances the dressy character of the watch, while the BOR steel bracelet gives it a sportier look. The vintage essence in the design is there. Sure, the timepiece wasn’t built to the same standards as Swiss watches, but Japanese brands like Seiko and Citizen have a well-earned reputation for building tough, reliable watches at an unbeatable price.

With prices averaging $350-600 on the market, you get an in-house movement with date, alarm and a rather interesting mix of design flavours. 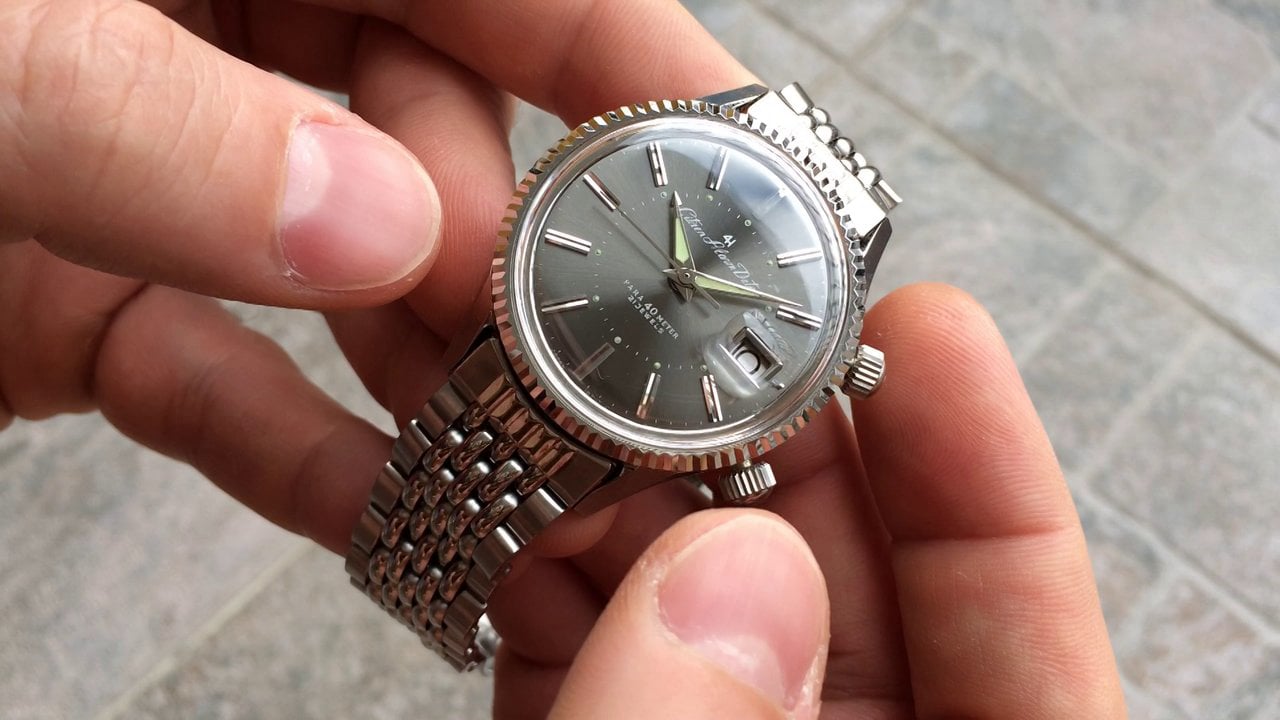 On paper, alarm watches seem to feature the ultimate gadget – or should we call it a “complication”? In reality, however, the functionality can be hard to exploit.

Indeed, if you use your timepiece as a typical alarm and leave it on your bedside table, when it rings the watch vibrates so strongly that it could potentially fall to the ground. The other possibility is to wear it while you sleep... not the best idea either as it is not particularly comfortable and you may risk damaging it.

Having said that, the alarm function is still cool: if you’ve never tried one, you really should! Just set a random hour for the alarm to ring, and let the vibrations and the sound interrupt you, surprise you and spice up a little stretch of your day. 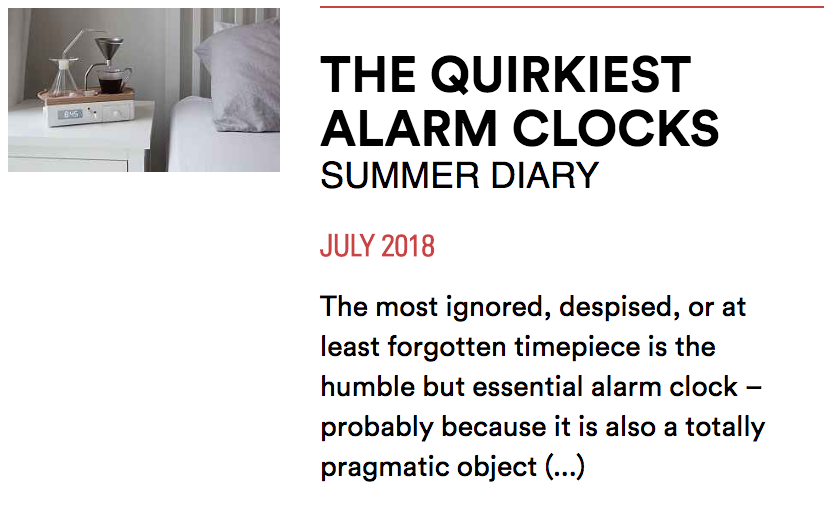