The story behind the Movado Ermeto, a disruptive timepiece that went against the flow of the rest of the watch industry. Smart, innovative, elegant yet sturdy, sportive and bold, the Ermeto was a success in the 30’s. With a lifespan of more than 40 years, it stands as a pillar for the brand and as a great example of creativity and ingenuity.

The story behind the Movado Ermeto, a disruptive timepiece that went against the flow of the rest of the watch industry. Smart, innovative, elegant yet sturdy, sportive and bold, the Ermeto was a success in the 30’s. With a lifespan of more than 40 years, it stands as a pillar for the brand and as a great example of creativity and ingenuity.
T

he story of watchmaking has always evolved around milestone achievements, either on an aesthetic or technical level: “the first portable watch”, “the first wristwatch”, “the first automatic watch” and so on. However, only a handful of companies have managed to launch a product that was innovative from both an aesthetic and technical point of view. This is not the first time that the vibrant heritage of Movado has been mentioned in Europa Star, but it’s time to look at what could be described as the boldest creation of the brand, the Ermeto.

The name of the company, Movado, means “movement” in the international language Esperanto, and Ermeto signifies “sealed or hermetic” in Greek, in reference to its unconventional case design. But before we go into the technical features of the watch, we need to understand the reasons behind its creation. 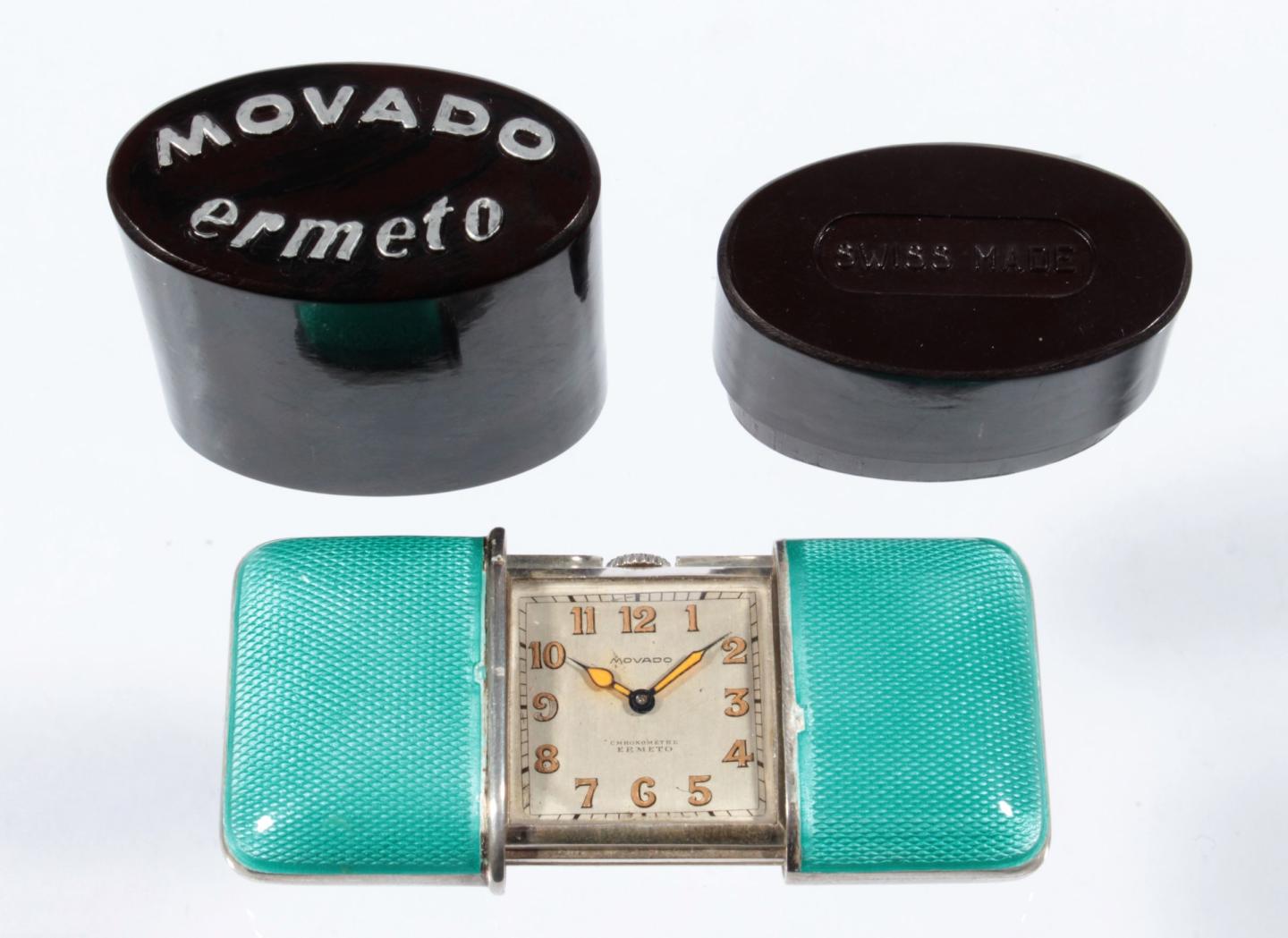 In 1926, the Huguenin Frères & Cie case manufacturer invented and patented a rather imaginative watch case featuring a sliding mechanism.

The company knocked on the doors of various watch brands in an attempt to sell the design, but all responses were negative –except one. Movado, which was constantly looking to launch innovative and bold creations, saw the potential behind the odd case architecture. A deal was sealed, some months passed, improvements were made and the Ermeto was launched. Movado took a significant risk by going against the flow of the rest of the watch industry, which was betting heavily on wrist watches. The Ermeto was a portable/pocket watch hidden inside an elegant sliding case.

How to wear the Ermeto

When closed, the case protected the dial and mechanism and, once opened, it delicately revealed the time. While the early models were manually wound, automatic versions came a year after launch. It was not your typical automatic movement, as the opening procedure also served as the winding mechanism for the calibre. Opening and closing the watch three to four times was enough to power it for a day.

The case was generally made of silver or gold, and the case cover could come in a variety of materials and designs, including leather (crocodile, snakeskin, etc.), Chinese lacquer and sometimes steel.

The Ermeto was designed to be the ultimate pocket watch and, as such, on the one hand, it was advertised as a practical and tough travel watch with protection from dust and rain, and on the other, as a fashion item, elegant and customisable. In other words, it was a statement of elegance, a smart piece of jewellery, well before the era of smartwatches. Promoted as a high-end watch for frequent travellers and sportsmen/women, the Ermeto was adopted by both genders and ultimately became what could be described as the industry’s first unisex watch. The timepiece could be worn and transported in a pocket, or attached with a chain to a suit or even a bag. 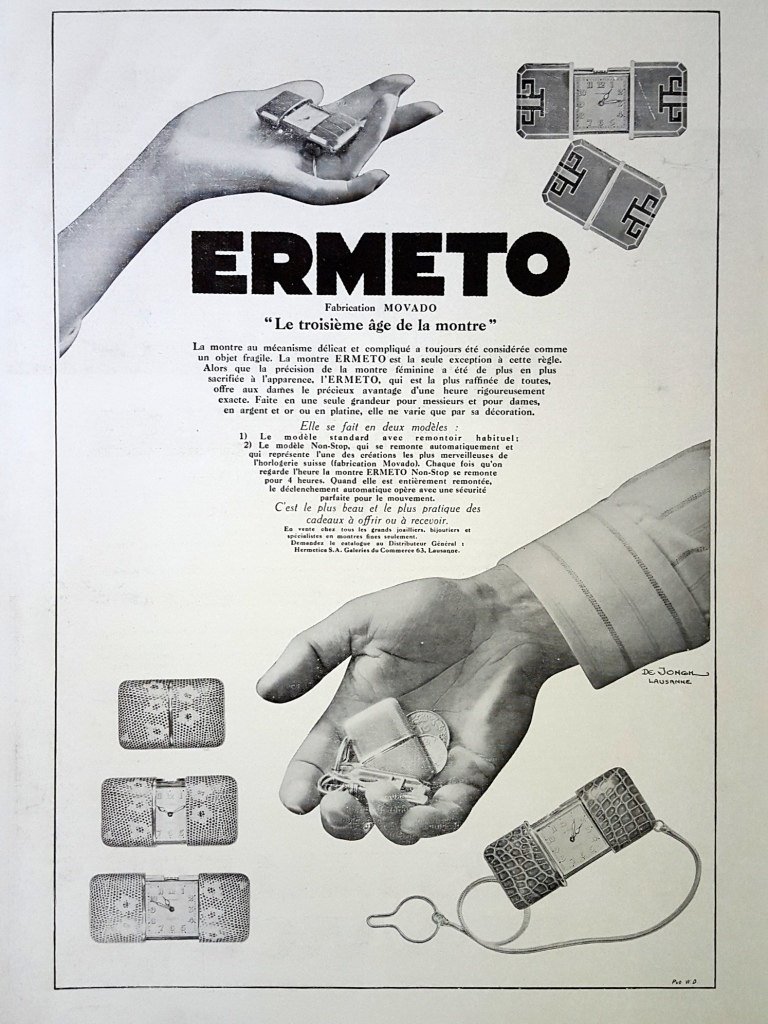 In its clever advertisements, Movado bragged about the versatility and durability of the case, stating for example that it could even be run over by a car and still function. It was an intelligent marketing strategy, and by developing partnerships with top distributors, and retailers such as Hermès for France and Tiffany & Co. for the USA, the Ermeto quickly became an international success for Movado. Widely appreciated and validated, the only mild criticism of the Ermeto concerned the opening procedure, which required both hands. 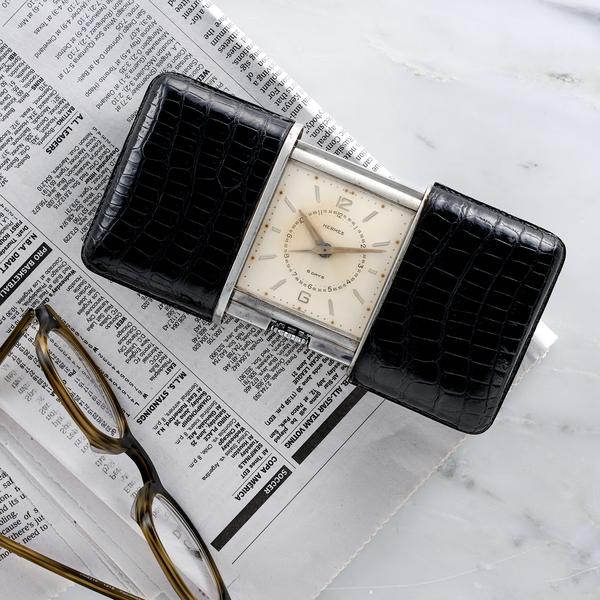 The Ermeto family lived on until the 1970s, with various versions and improvements –incredible longevity for a timepiece, particularly so for a pocket watch!

The family comprised four children, as follows: the regular kid, also known as the “Normal Ermeto”; the largest one, the “Ermeto Pullman”; the old one (8 days power reserve), the “Ermeto Master”; and the toddler, the “Ermeto Baby”.

Over the years, many of the family members came with various technical improvements and complications. Ermeto calibres were high-grade movements, most of them chronometer certified. Later and rarer iterations were offered with complications such as small seconds, triple date, moon phase and alarm. With its ambition to be the perfect travel watch, the Ermeto later came with an integral kick-stand attached to the caseback, allowing the versatile timepiece to become a beautiful table clock. 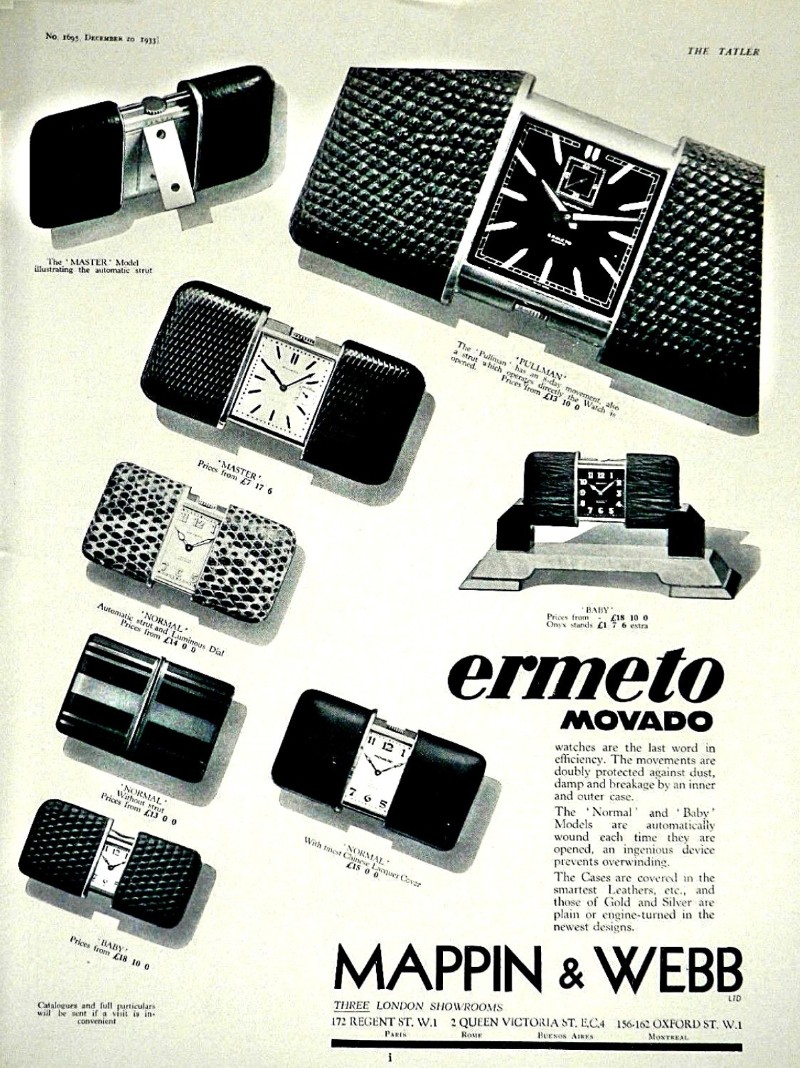 Introduced in the midst of the Art Deco movement, early Movado Ermeto watches were highly influenced by this design trend. Both dials and case covers served as playgrounds for the creativity of designers from that era. A large variety of dials was produced, from radium hands and numerals to white gold applied Breguet markers, and designs could vary widely depending on their production year. I personally love the two-tone sector dial with radium numerals and, although it’s not the rarest, it’s definitely a must, in my opinion. 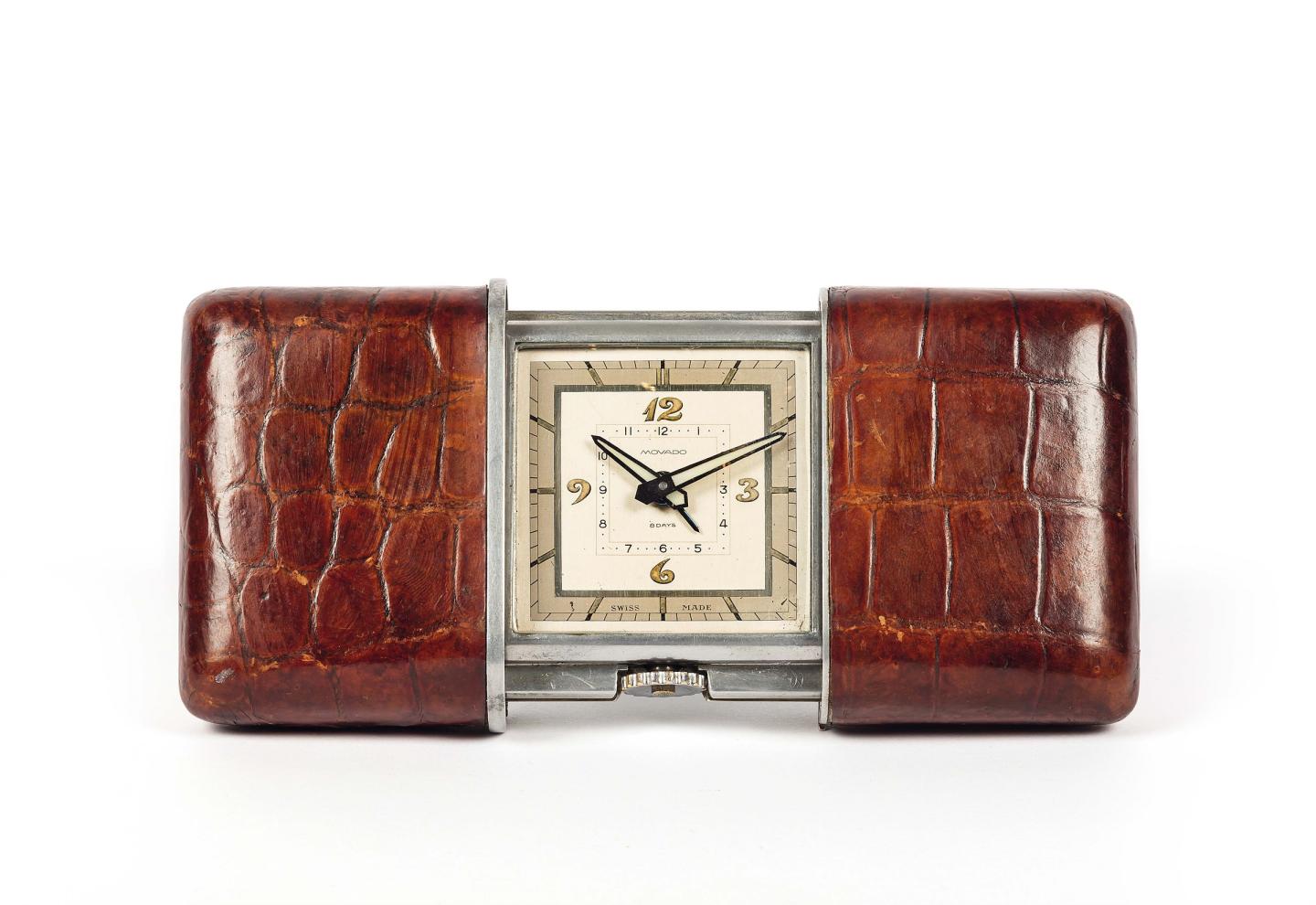 Despite their relative sturdiness, it’s becoming harder to find Ermeto timepieces in mint or good condition. Case covers tend to be the first part of the watch to be affected. Due to the material (leather), the majority of them have unfortunately been replaced or refinished. As far as the watch itself is concerned, the chrome-based case can also be an issue, as it deteriorates quickly over time.

Although known to collectors and watch historians, the Movado Ermeto nonetheless continues to fly under the radar, and can still be acquired for a relatively low entry price. As a genuine piece of watch industry heritage, the Ermeto was seen as modestly revolutionary back in the ’20s. It stood as a different approach of looking at time, a new way of wearing a watch and a fashion statement. It was a bold move at the time, but it succeeded, proving that audacious thinking and clever marketing might still, even today, form the basis of a rewarding strategy. 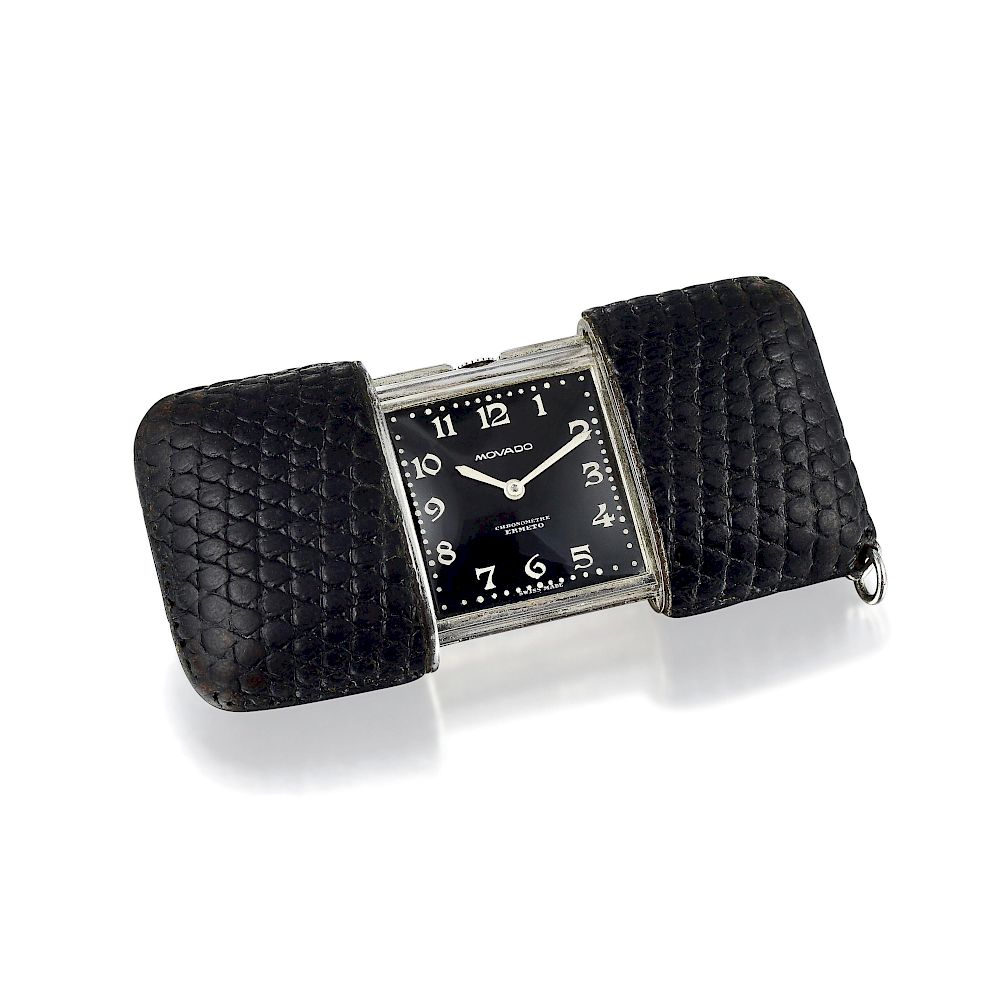