Andersen Genève presents four new timepieces to celebrate its 40th anniversary. In this special feature, we present the first two of these exclusive watches, and tell you more about the history of this creative brand founded by Svend Andersen.

Andersen Genève presents four new timepieces to celebrate its 40th anniversary. In this special feature, we present the first two of these exclusive watches, and tell you more about the history of this creative brand founded by Svend Andersen.
I

n 1980, Svend Andersen received an order from a prominent Swiss watch collector to make a new gold case for a highly complicated pocket watch movement Louis Audemars from around 1900. Svend Andersen had only just left his role at the “Atelier des Grandes Complications” at Patek Philippe to start his own atelier in Geneva, alongside the Rhône river. He then started aesthetical studies and together with a Geneva case maker, they created a new case.

In 1980, Svend had only just left his role at the “Atelier des Grandes Complications” at Patek Philippe to start his own atelier in Geneva.

Since then, collectors from all around the world have been impressed by his talent to make “unique pieces” and exclusive collections thereafter. 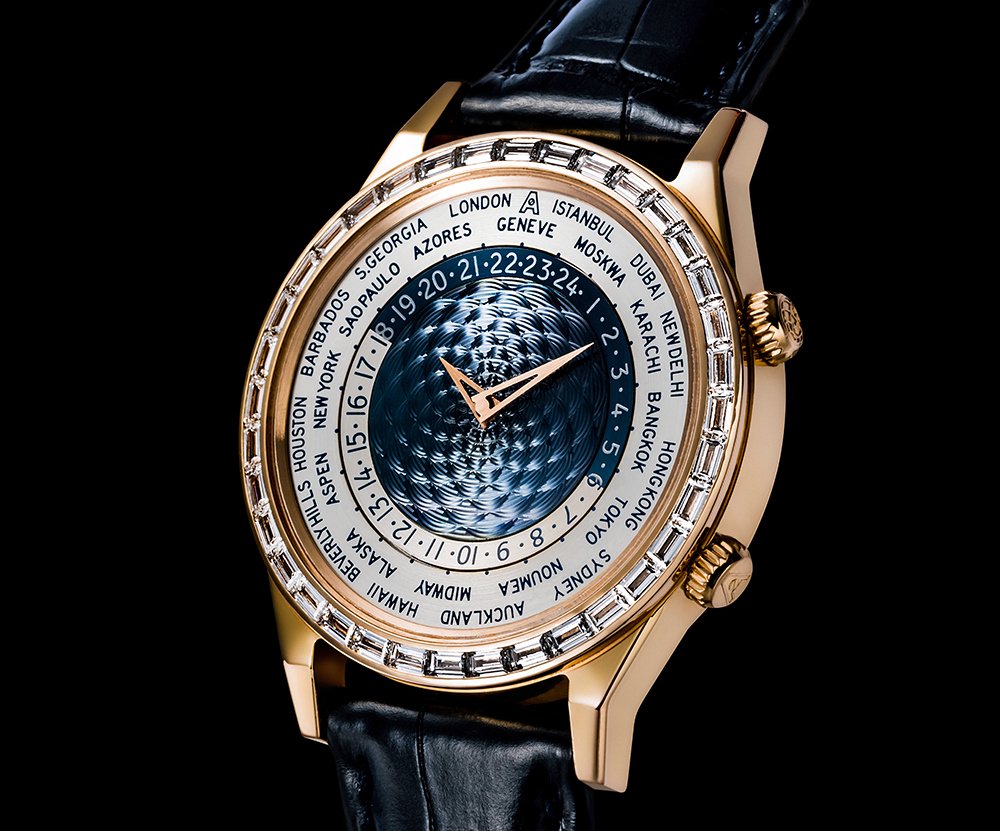 To celebrate 40 years of independent watch creations, Andersen Genève introduces its first ever world time watch, the Tempus Terrae model, with an invisible settings baguette diamonds bezel. This timepiece has been presented to Asian collectors in January 2020. It received a warm welcome, thanks to the perfect harmony between the case and the size of the baguette diamonds, not too big, not too small, just elegant.

The Tempus Terrae carries Andersen Genève’s DNA, praised by watch collectors: a very sober and classy watch case in gold with aesthetic simplicity. The centre of the dial is made of exclusive BlueGold that Andersen Genève has been mastering for decades. It is a 21ct gold with iron elements in it. Once heated the gold gets an exclusive blue colour that reflects light in a very special way. No two dials get out of the oven with the same colour, making every dial unique. The hand guilloché “scale” pattern empowers light reflexion too. It is an extremely difficult texture to handcraft.

In order to let the BlueGold dial shine as much as possible, the Andersen Genève logo was removed from the centre of the dial and replaced by the “A” logo on the outer ring of the dial, the so called “City Ring”, above GENEVE. Brushed “A”-shaped Andersen hands are also part of Andersen Genève’s DNA. They remain as discreet as possible to give a clear visibility of time.

The Tempus Terrae has two crowns. The first one, with the “A” logo. will set the time (minutes and hours). The second one, with a “TT on a globe”, logo will be used to set the reference time zone, i.e. the corresponding city, where the user is living (or travelling). 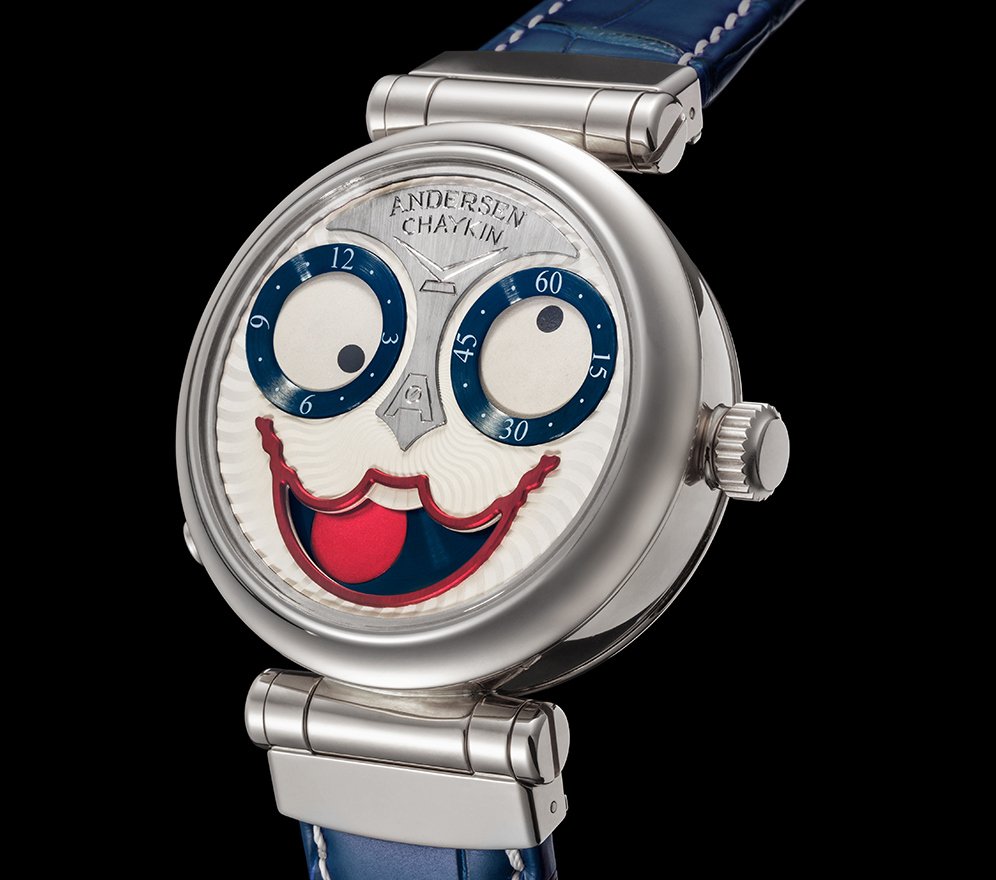 The second timepiece to be presented is the 2020 Andersen Genève & Konstantin Chaykin Automaton Joker in white gold. A limited edition of 20 pieces only.

In 2017, those two high end watchmaking companies joined forces and developed the “Automaton Joker”. A limited Edition of 20 timepieces with 5N red gold case was released in 2018. The front with the Joker face and the back with an Automaton and moving parts giving life to a lively scene when pushing the button. 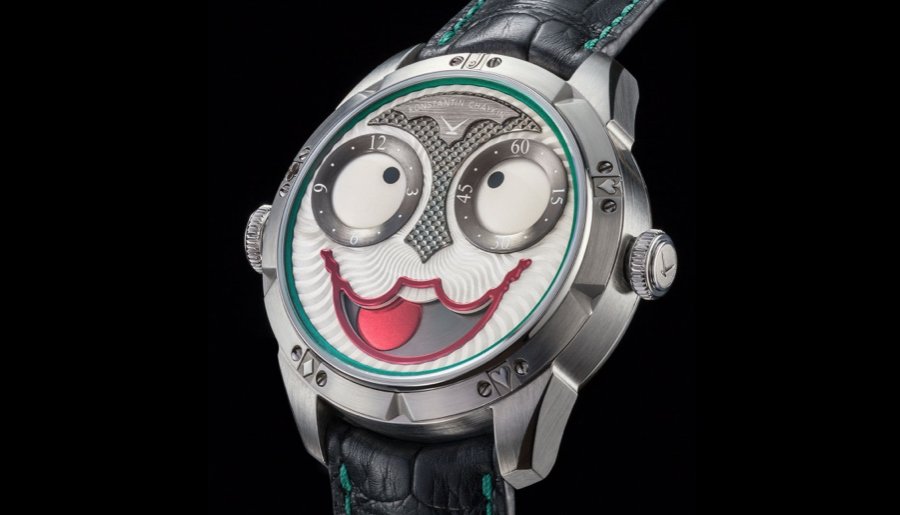 This model was presented at Baselworld 2018 and instantly gained recognition from watch collectors and the pres all around the world. It was selected for the prestigious 2018 Grand Prix d’Horlogerie de Genève (GPHG) 2018.

Following its success and demands from collectors for a white gold version, a new limited edition of 20 timepieces with a white gold case is introduced in 2020.

Andersen Genève, famous for its Eros Automaton’s, created the first timepiece with a poker game scene on the back dial. Andersen Genève “Montre à Tact” Poker is inspired by “A Bold Bluff”, a painting by Cassius Marcellus Coolidge. Its miniature painting scene on the dial shows a scene of “Dogs playing Poker”.

Between 1903 and 1910, this American artist of the Belle Epoque created 16 oil paintings of dogs in human poses. Nine of them were depicting dogs playing poker.

One of the dogs from the Montre à Tact Poker from Andersen Genève ended up on a new table: this dog is now playing poker with Konstantin Chaykin’s Joker & special guests!

One of the dogs from the Montre à Tact Poker from Andersen Genève ended up on a new table: this dog is now playing poker with Konstantin Chaykin’s Joker & special guests! 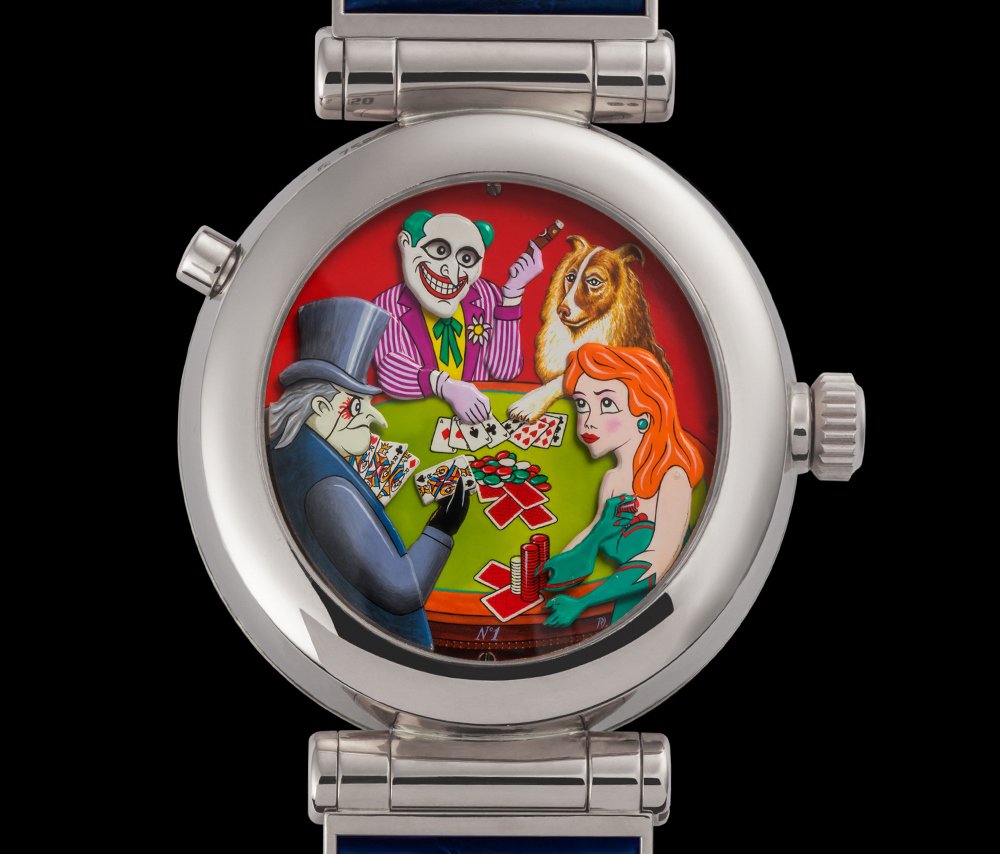 Special attention to the smoothness of the movements of the parts has to be underlined, as it is one of the most complex tasks to master with Automaton’s: very element of the scene has been cut, polished and painted by hand. This has been made possible thanks to the hundreds of hours spent by craftsmen. By the push of a button on the case at 8 o’clock, the Joker’s eyes, the dog, the man and the lady are in motion. The elements are moving and the scene lasts for around 2 minutes!

One can note that the eyes of the Joker are moving much slower than the hand holding the card or than the dog! The lady’s hand is moving much faster than the other moving elements while she is stealing chips; this is yet another very delicate achievement to have different speeds of the moving parts.

The dial of the Automaton Joker tells time like no other timepiece, thanks to the Joker’s eyes and the moon phase displayed in the mouth!

Thanks to more than 20 years of making and assembling Automaton’s, the Automaton Joker in motion displays very harmonious movements.

With the help of Konstantin Chaykin’s know-how, a unique way of telling time appears on the front dial. The dial of the Automaton Joker tells time like no other timepiece, thanks to the Joker’s eyes and the moon phase displayed in the mouth!

With the help of Konstantin Chaykin’s knowhow, a unique way of telling time appears on the front dial. The dial of the Automaton Joker tells time like no other timepiece, thanks to the Joker’s eyes and, moon phase displayed in the mouth!

To underline this collaboration, Konstantin Chaykin’s logo has been placed on top of the eyes while Andersen Genève’s logo can be seen on the nose of the Joker. Both logos and the text “Andersen Chaykin” have been hand engraved by a master engraver in Geneva.

The case of this timepiece has been made to measure in order to incorporate such a complex dial and the Automaton on the back. Very delicate moving hinges guarantee an utmost comfort on the wrist and a very elegant aesthetic outlook.

The third timepiece Andersen is currently working on holds a jumping hours complication. It will introduce it to collectors and the media this summer.

Before the end of 2020, you will also have a “snapshot” on the fourth timepiece that will close this celebration year and lead to Andersen Genève’s next milestone… its 50th anniversary in 2030!