A Zenith mystery comes full circle in the Chronomaster Revival “Shadow”, a timepiece inspired by an obscure prototype from 1970.

A Zenith mystery comes full circle in the Chronomaster Revival “Shadow”, a timepiece inspired by an obscure prototype from 1970.
A

timepiece shrouded in mystery. Its existence has eluded collectors and Zenith collaborators alike for decades. As the legend goes, in 1970, not long after Zenith debuted the groundbreaking El Primero calibre, the manufacture had produced a prototype of a manual-winding chronograph, housed in a blackened steel case – a rarity for the time. Only a handful of this spectral prototype was made, but the model was never officially produced or commercialized. Many watchmakers and longtime employees of Zenith had heard of and even seen one of the rare prototypes, even though official records about this piece are extremely scarce.

Fast-forward to 2019. As Zenith began celebrating the 50th anniversary of the seminal El Primero chronograph calibre, the team at the manufacture began to go through the secret walled-off attic where Charles Vermot had once hidden all the plans and parts necessary to produce the El Primero movement. There among the countless artifacts was a box and in it, the original prototype of the black chronograph that hadn’t been seen by anyone since the early 1970’s. For the team, surely this couldn’t be a coincidence, but fate calling. It was enthusiastically agreed that the timing was perfect to complete the black chronograph project that had begun almost 50 years ago.

The Chronomaster Revival “Shadow” reimagines what could have been, rather than directly reproducing a historical Zenith timepiece. Inspired heavily by the obscure black chronograph prototype from 1970, the Shadow is housed in a 37mm case, a faithful reproduction of the very first watch fitted with the El Primero, the A384. But instead of the traditional choice of stainless steel with a superficial layer of black coating, Zenith has opted for microblasted Titanium, bringing out the dark grey nuances of the lightweight yet highly durable metal with its completely matte finish. And unlike the prototype from 1970, which feature a manual-winding chronograph movement, the Chronomaster Revival Shadow features the most prolific automatic chronograph ever made, the El Primero, visible through the display back. 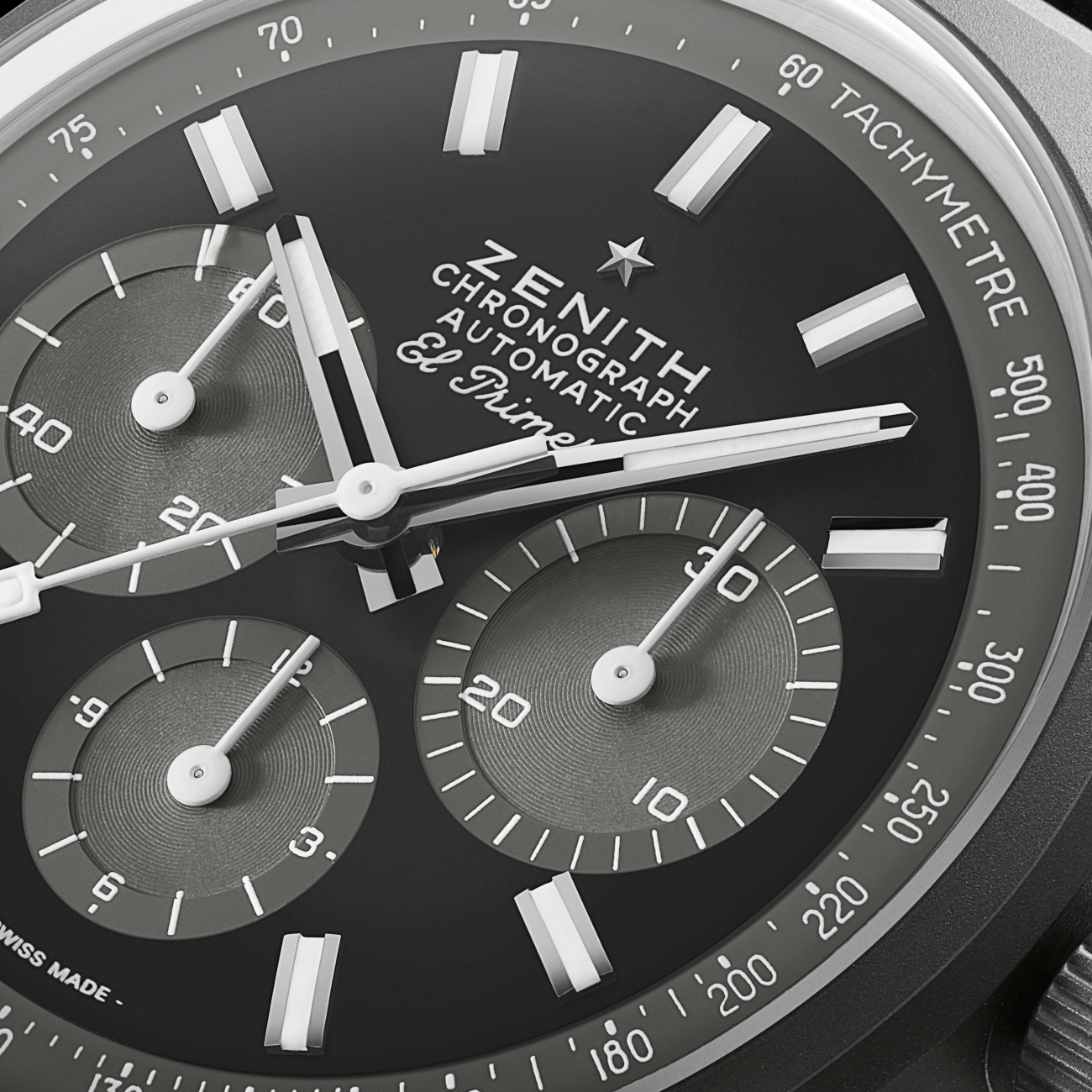 In spite of its dark demeanor, the Shadow remains a highly legible chronograph, with grey counters and tachymeter scale subtly contrasting against the deep, matte black dial. The hands and applied markers are filled with white SuperLuminova that emits a bright green glow in the dark. The black rubber strap with a cordura-effect features a touch of white on the stitching, fixed to a microblasted titanium pin buckle that matches the stealthy finish of the case.