The elegantly understated Patrimony moon phase retrograde date model is joining the Collection Excellence Platine concept. Launched in 2006, it offers collectors exceptional watches in 950 platinum limited editions. Case, crown, dial, buckle are crafted from this noble metal, while even the alligator leather strap is hand-stitched with platinum and silk threads.

he Patrimony moon phase retrograde date model, presented in 2017 in white and pink gold versions, is one of Vacheron Constantin’s signature watches. Its understated elegance and the originality of its display embody the Maison’s identity at first glance. Three years after its launch, this timepiece with its pleasing proportions is enriching the Collection Excellence Platine concept with a 50-piece limited boutique edition.

Entirely faithful to the spirit of the Patrimony collection, drawing inspiration from the watches created by the Maison in the 1950s, this timepiece bears witness to the minimalist aesthetic approach with a concern for detail aimed at achieving perfectly balanced lines. The timelessly elegant 42.5 mm round case houses the self-winding Manufacture 2460 R31L calibre with its precision moon phase and retrograde pointer-type date display. For optimal userfriendliness, all function settings are performed via the crown.

With its “Collection Excellence Platine” concept launched in 2006, Vacheron Constantin produces exceptional watches for collectors. Ranging from the simplest to the most complicated, all are offered in limited editions at a rate of one or two models per year. As its name suggests, their distinctive feature is 950 platinum, the watches being crafted in this noble metal from case to dial including the buckle while even the midnight blue alligator leather strap is hand-stitched with platinum and silk threads. 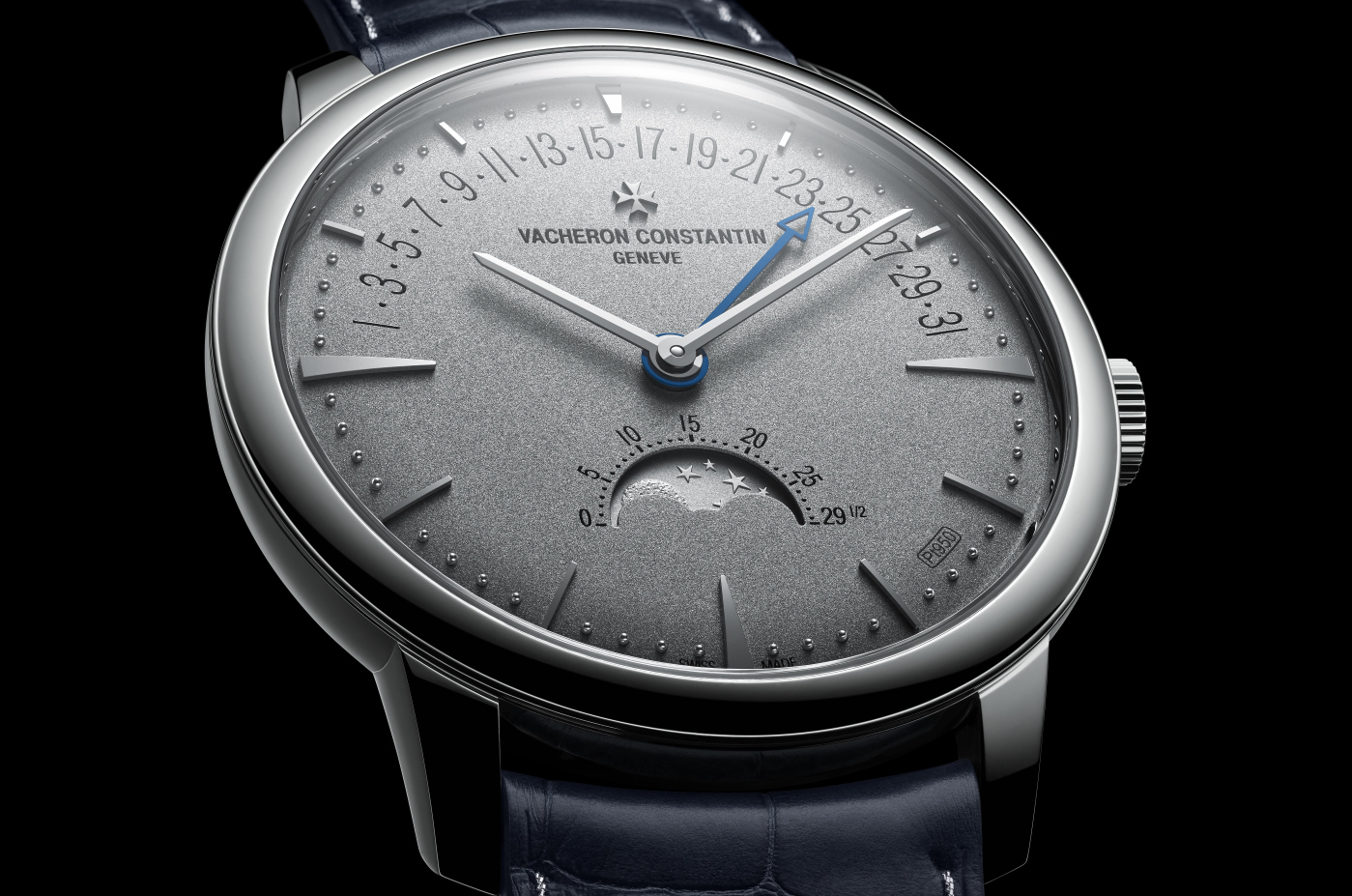 The secret signature on sand-blasted dial of the Patrimony moon phase retrograde date watch is the inscription «Pt 950» between 4 and 5 o’clock. The moon-phase disc, which can be admired through an aperture at 6 o’clock, is also in platinum with a polished surface on the stars and a grained texture for the moon circles imitating the visible irregularities of the lunar surface. The dial is slightly convex around its circumference and punctuated by applied 18-carat white gold hour-markers, appearing at intervals around a likewise white gold “pearl” minute-track. The batontype hands are made of the same metal, blued for the date pointer for enhanced readability.

This timepiece is powered by the Manufacture self-winding 2460 R31L calibre with a 40-hour power reserve. The transparent sapphire caseback provides a chance to admire this 275-part movement, notably the circular-grained surface of its mainplate and its openworked 22-carat gold oscillating weight inspired by Vacheron Constantin’s Maltese cross emblem. 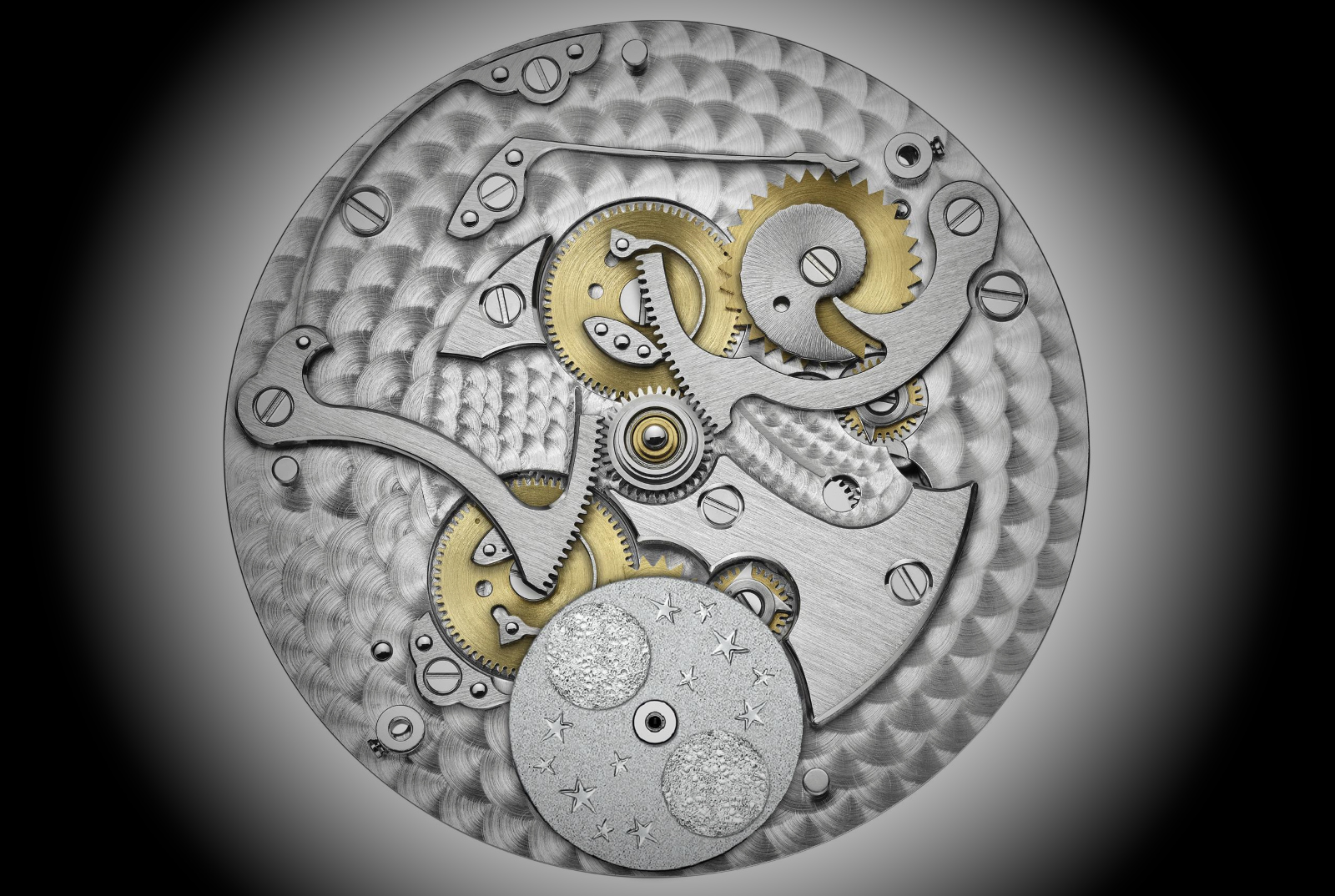 The moon phases are displayed through an aperture at 6 o’clock, graduated from 0 to 29½, serving to count off the number of days elapsed since the last new moon. This horological complication, known as the age of the moon, corresponds to the actual cycle of this heavenly body, which rotates around the Earth in exactly 29 days, 12 hours and 45 minutes. The precision moon phases mechanism requires a one-day correction only once every 122 years.

The second complication – a retrograde date indication by means of the central hand – occupies the upper part of the dial. To ensure user friendliness, all operations are performed via the crown: winding, date correction, moon-phase adjustment and time-setting.