THE TWO NEW FACES OF THE URBAN ADVENTURER


Always in movement, the Aikon Venturer collection has been expanded with two new models, created with a common base but radically different aesthetics. The bronze and brown ceramic version is bold and modern. The gold and steel model with the anchor blue dial is sporty yet chic. Watches with fashionable colour codes, destined for the city, a world that is experienced in many different ways, just like Venturer.

THE TWO NEW FACES OF THE URBAN ADVENTURER

Always in movement, the Aikon Venturer collection has been expanded with two new models, created with a common base but radically different aesthetics. The bronze and brown ceramic version is bold and modern. The gold and steel model with the anchor blue dial is sporty yet chic. Watches with fashionable colour codes, destined for the city, a world that is experienced in many different ways, just like Venturer.
I

t is the ability to change that marks out the power of a design. That’s how Aikon Venturer continues its expansion into the urban world. Strong but not brutal, robust but not massive, moder n but not futuristic, this automatic watch with three hands and a date function has a real presence on the wrist. Whichever version you choose, its function sectors, level of detail and the energy emanating from the piece directly signal the connection to the Aikon’s aesthetic codes.

Crafted entirely from steel or bronze, its surfaces are satin-finished, while its edges are polished. The bezel’s six arms – a powerful, characteristic Aikonfeature – have been given a functional role. They extend beyond the ceramic bezel so that it can be easily grasped and rotated in one direction. The arms are engraved with 10-minute intervals, a feature which makes the Aikon Venturer a genuine tool watch. Its screwed case back features a “Vagues du Jura” motif surrounding the engraved “M” logo in the centre, demonstrating the high standard of finishes given to the Venturer. Loyal to Maurice Lacroix’s mission, the new Aikon Venturer watches display a relationship between their objective and perceived value and their particularly favourable price. 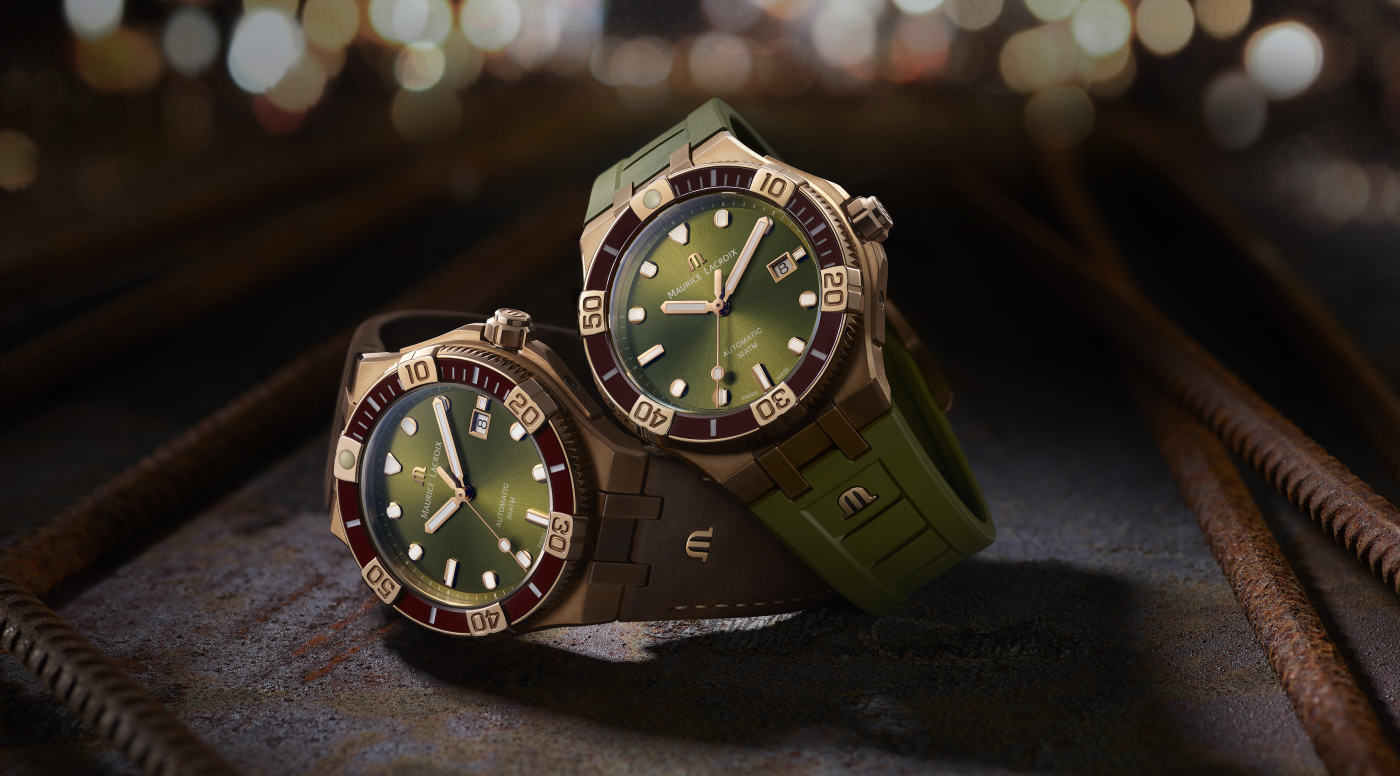 For the first time, the Aikon Venturer features bronze. The 43 mm case is made from a special alloy that can be given a patina or browned without oxidizing. To increase the functional purpose of this metal, which is virtually synonymous with a tool watch and as such per fectly suited to the Venturer, Maurice Lacroix has finished it with a deep green sunray-brushed dial.

This is also the colour given to the rubber strap with grooves that add structure to the piece. Thanks to the Easychange system, it can be swapped in the blink of an eye for a vintage brown calfskin leather version with ecru topstitching. The ceramic bezel becomes a shade of brown, while the six hour-marker arms stay true to the Venturer’s style and are brown like the case. This watch fitted with the ML 115 automatic movement is available in a limited edition of 500 pieces.

There’s another first for the Aikon Venturer 43 mm which features steel and gold, with steel components gilded with 2N yellow gold. The small bracelet links, crown and bezel’s arms, as well as its bright and delicate touches give new life to what was previously just a functional model. But this version’s function is completely different: a deep blue sunray-brushed dial with a ceramic bezel in the same shade that gives it an elegant, sporty-chic look that reflects the real-life uses of an entirely metallic watch. The choice of 2N yellow gold and deep blue gives a premium vintage 80’s look to the ensemble, enriching Maurice Lacroix’s style vocabulary once more. The Easychange quick strap change system allows its user to change styles in a fraction of a second. Also fitted with the ML 115 automatic movement, this model is part of the brand’s current collection. 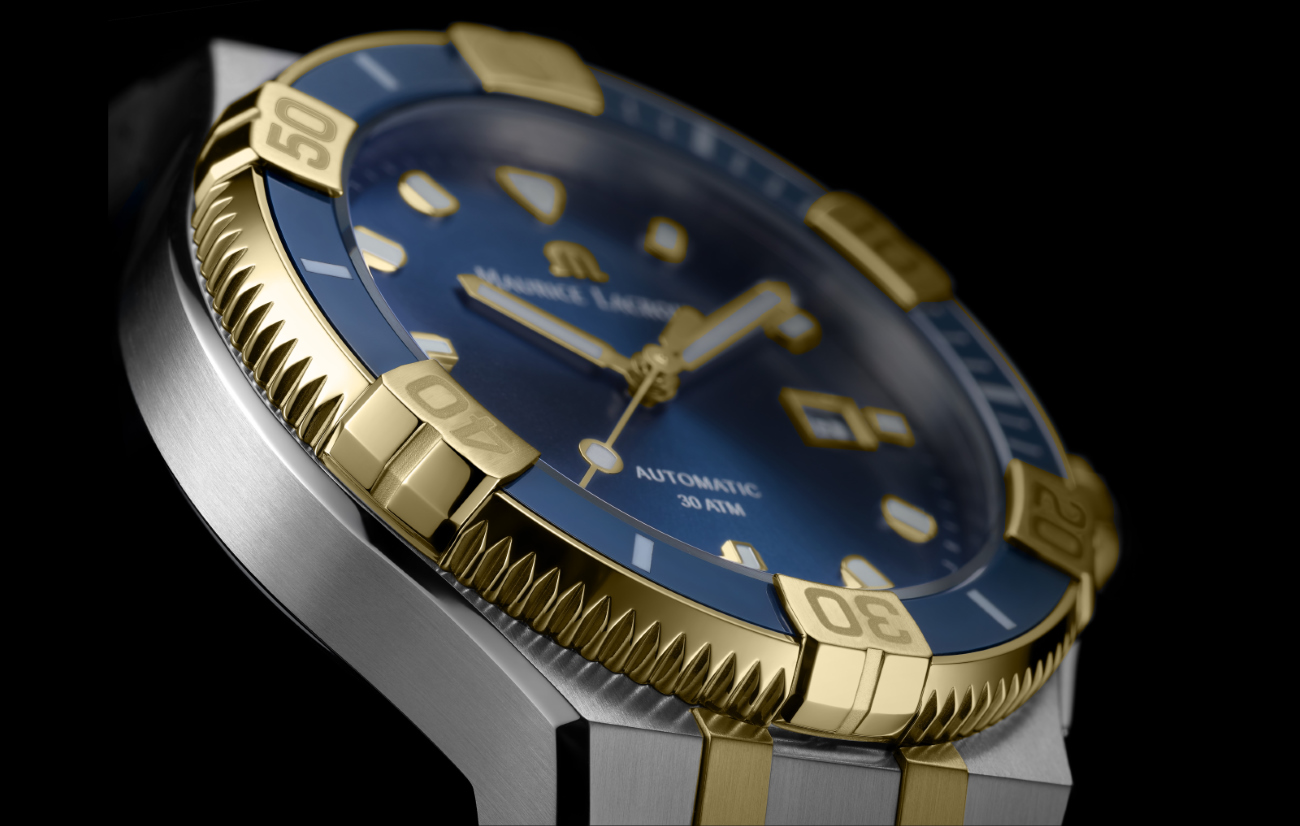 The Aikon Venturer is descended from the Maurice Lacroix Calypso, which included a diver’ s version at the time. This steel watch was one of the brand’ s iconic models in the 1990s and bore the same design codes that live on in the Aikon V enturer. The integrated and water-resistant case, the six-arm bezel surrounding a flat sapphire cr ystal and the strap marked with an applied M logo made this model with its exceptional presence the brand’ s most iconic product. In 2016, Maurice Lacroix produced a contemporar y reinterpretation of this iconic piece with the quartz Aikon . In 2018, an entire collection of Aikon Automatic pieces continued the saga and was topped off in 2019 with a new branch of the Aikon generation. The Aikon Quartz watches and the Aikon Automatic watches share a watchmaking culture of perceived high quality and affordable prices. Sportier, just as modern and even more adventurous, this stylised Aikon V enturer is designed to face up to the challenges and ambitions of today’ s urban life.