A Singer Track1 Prototype will be auctioned by Phillips


Singer Reimagined celebrates its third year anniversary in 2020. For this occasion and in collaboration with Phillips, the brand is presenting a very rare and unique piece of the Singer Track1 to participate to the watch auction from 27th to 28th in Geneva.

A Singer Track1 Prototype will be auctioned by Phillips

Singer Reimagined celebrates its third year anniversary in 2020. For this occasion and in collaboration with Phillips, the brand is presenting a very rare and unique piece of the Singer Track1 to participate to the watch auction from 27th to 28th in Geneva.
T

his piece represents the original style imagined by Marco Borraccino when founding the brand in 2017. Thus, it embodies the starting point for the final design of the later named Launch Edition.

This specific timepiece has been used as a first nest to test the famous AgenGraphe 6361 movement and has incarnated the entire Track1 Collection and the spirit of Singer Reimagined. Slightly different from the marketed model, The Singer Track1 Prototype comes with a never seen before special Grade 5 Titanium open horns case inspired by 60’s and 70’s iconic chronographs. It is paired with a very unique Kaki Green baranil calf strap. We have chosen a 22mm made to measure NATO style bracelet combined with same dimension brushed Grade 5 Titanium rings and pin buckle with polished edges. 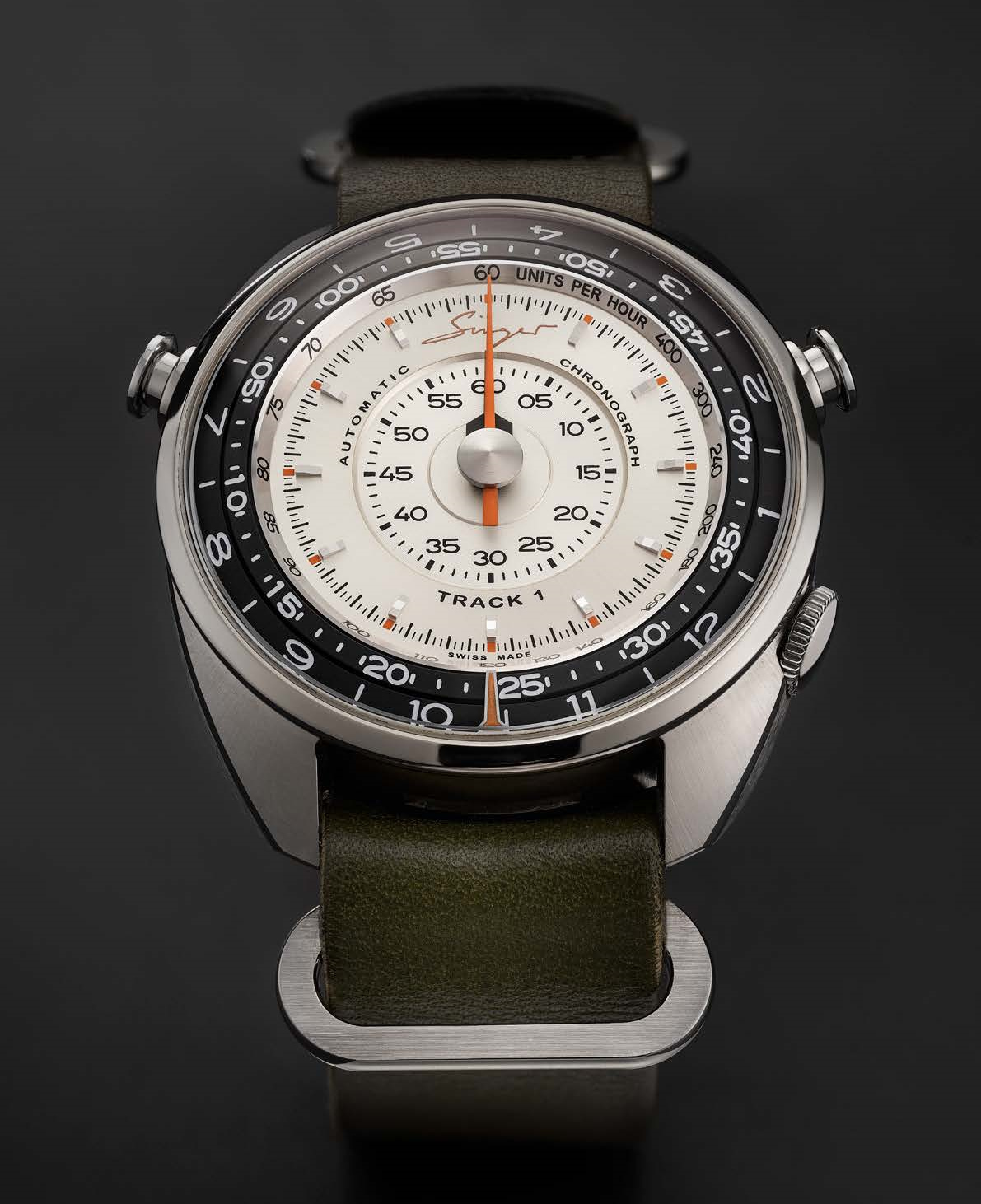 The Singer Track1 Launch Edition prototype will be presented during the auction sales with lot number 100. The Limited Edition of 50 pieces of the Launch Edition has been completely sold out. This prototype appears as the last chance for Singer enthusiasts to purchase the “first” last piece of this specific and unique style.

Experts like Del West, an industry leader in the field of high-precision machining for bothwatches and cars, and Fiedler SA, one of the most renowned fabricators of watch hands in the watchmaking industry, have partnered up with Singer Reimagined in the quest to push boundaries and take on new challenges. Working in collaboration. Everything is important.

Singer Reimagined distils the essence of iconic stop watches from the 1960’s and 1970’s to reimagine the chronograph, giving birth to a new watch, with history on its side. Form follows function, with a radical focus on legibility through the centralized display of all the chronograph functions thanks to a revolutionary movement. 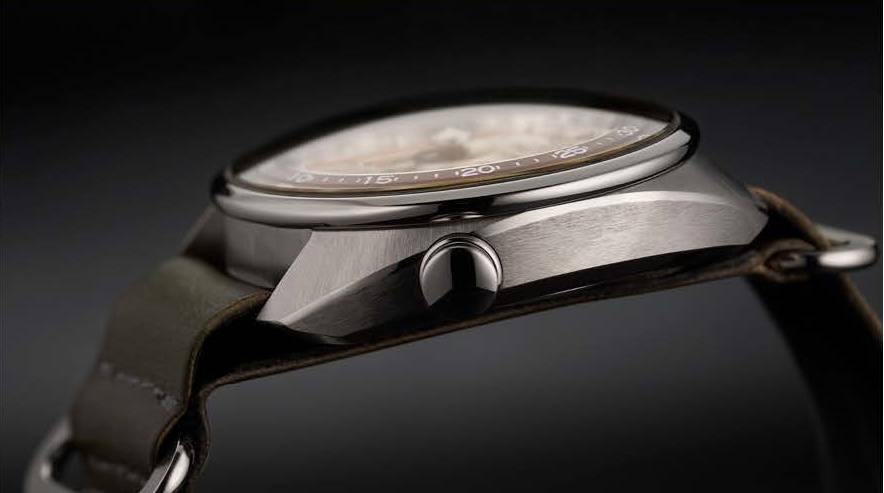 Form follows function, with a radical focus on legibility through the centralized display of all the chronograph functions thanks to a revolutionary movement.

With clean, dynamic lines, the stylish case offers a modern take on classic 1960’s chronograph design. It has a distinctive barrel -shape with a thin, round bezel, softly curved for enhanced ergonomics. 43 mm in diameter; it is crafted from titanium with alternate polished and sunray brushed finishes.

Although their primary function is displaying the time, the raised hour and minute discs are an integral part of the design, re-interpreting the bezels of 1960’s racing chronographs in a whole new dimension. In line with this sporty, motoring inspiration, the Singer Track1 also features a tachymeter scale along the flange.

The gently domed chronograph pushers are unusually located on opposite sides of the case to optimize operation - start / stop on the right and reset on the left, just like early dashboard timers. Their profile and surface ensure smooth handling, further enhanced by a special mechanism designed to optimally adjust their stiffness. There is indeed a certain sense of pleasure that comes from feeling the button release under the right amount of finger pressure while hearing the perfect click.

The crown meanwhile is ergonomically integrated into the case band at 4 o’clock. Its slim shape and deliberate positioning serve to further enhance the importance of the chronograph pushers. 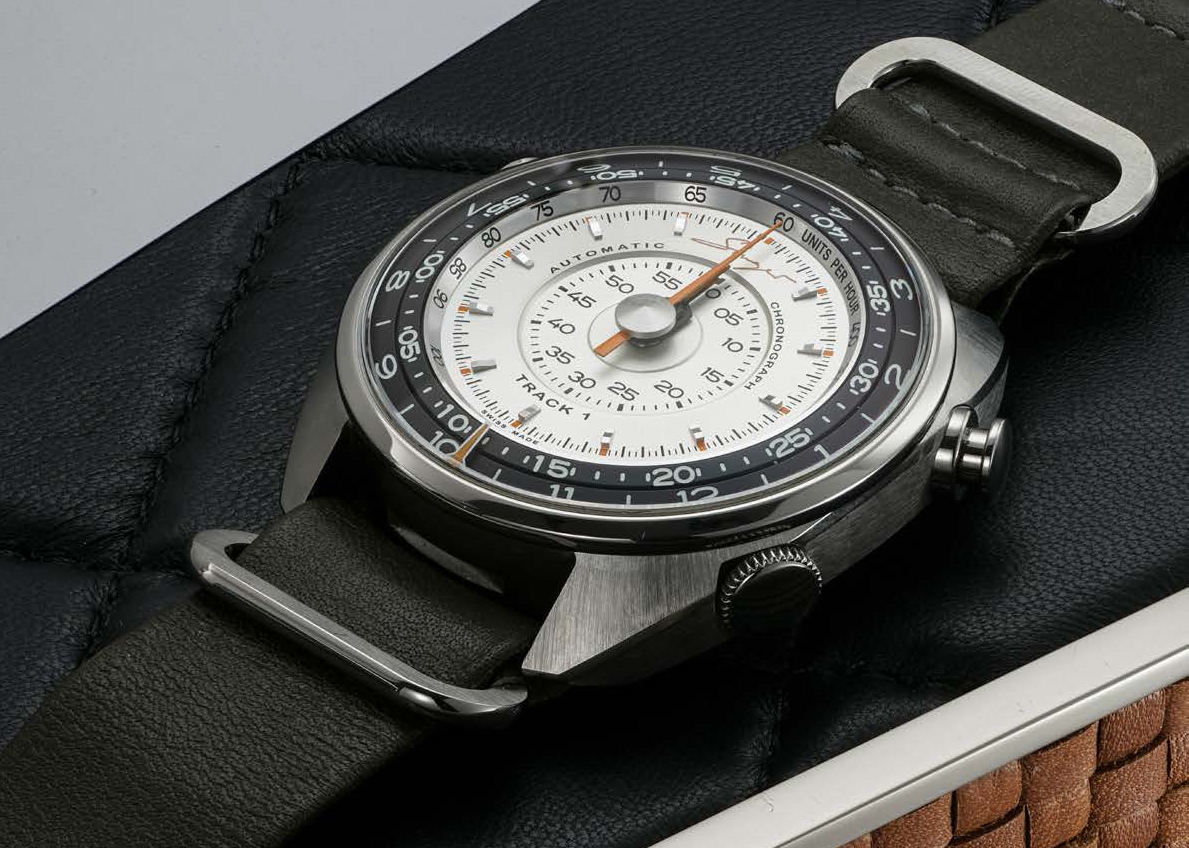 To enhance legibility as much as possible, the face of the watch features various finishes to create a sense of depth and contrast. The outer part of the dial is sunray brushed with applied markers, while the seconds-track distinct orange accents. The central part of the dial is snailed and features Arabic numerals in a bespoke font. The contrasting baton-style hands are shaped to perfectly overlap once the chronograph is reset.

In the center, the brushed aluminum central cabochon is reminiscent of Porsche speedometers and it is one of the few elements directly inspired by the ‘911’.

The Singer Track1 Prototype is worn on a soft kaki green calf leather Nato strap. It is made by expert crafts - men from selected hides and materials, with the same care and attention to detail that Singer Vehicle Design lavishes on its interiors. The pin buckle is in brushed titanium with polished edges

The AgenGraphe, the caliber powering the Singer Track1 Prototype stands apart from all previous chronograph movements. The result of a decade of development, this groundbreaking piece of mechanical ingenuity is radically different from anything that has come before it, completely redefining fundamental principles that have remained unchanged for decades. The underlying idea that led to the invention of the AgenGraphe was to enhance the legibility of the chronograph – which is usually poor due to the indications being spread out across the dial combined with the use of small counters.

The AgenGraphe brings together all the chronograph functions in the center of the watch, allowing for an easy and intuitive reading of elapsed time. Achieving this required radically new-movement architecture in order to create space centrally for the chronograph mechanism. As a result, the timekeeping functions are built into the periphery.To further enhance legibility, the chronograph incorporates jumping minute and hour indicators. Energy is stored for an entire minute (or hour) before being released precisely when a feeler-spindle working with a snail cam falls, generating an instantaneous increment of a full minute (or hour). When the chronograph is engaged, the constant rotation of the snail cam charges the minutes and hours cam, enabling the operation of the chronograph to remain constant.

Thus, avoiding varying forces affecting the amplitude of the movement, resulting in greater precision. These snail cams, combined with the efficient application of tribological principles, also allow for the resetting of the chronograph.

Activating the reset pusher releases the brake on the seconds wheel and lifts the minutes and hours stars’ jumpers and their click wheels to enable the reset to zero. The feeler-spindles, tensioned on the cams by springs, are then free to gently slip back to their “zero” resting positions. 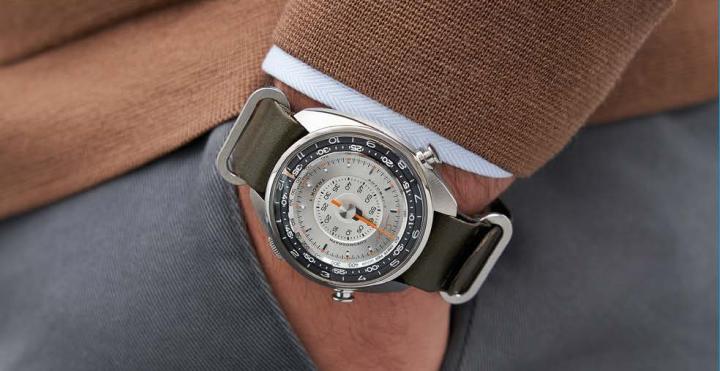