Laurent Ferrier, celebrates its 10th anniversary with the release of a classical watch featuring a timeless dial and case ensemble. The Classic Origin Opaline, housed in a sporty Grade 5 titanium case, upholds the company’s revered standards of craftsmanship and horological virtue.

Laurent Ferrier, celebrates its 10th anniversary with the release of a classical watch featuring a timeless dial and case ensemble. The Classic Origin Opaline, housed in a sporty Grade 5 titanium case, upholds the company’s revered standards of craftsmanship and horological virtue.
T

hroughout Laurent Ferrier’s history, the company has produced several complicated watches, including tourbillons, a minute repeater, a natural escapement, a dual time or even an annual calendar. In addition, the brand has released an array of different case shapes, including its iconic Classic.

In 2010, the Galet Classic won an award at the prestigious Geneva Watchmaking Grand Prix (GPHG). This watch was endowed with a tourbillon and a double balance spring as well as a classic, notably smooth, round case. This was not an isolated success. Furthermore, when the brand released additional models, it invariably received additional accolades. Indeed, Laurent Ferrier enjoyed further success at the GPHG in 2015 and 2018, notable recognition for its various case designs and movements, all conceived in the brand’s Genevan atelier. These cases and movements continue to endure.

In 2010, the Galet Classic won an award at the Geneva Watchmaking Grand Prix (GPHG).

The latest timepiece from Laurent Ferrier, the Classic Origin Opaline, is designed for those individuals who value sobriety and virtue. Created to mark the 10th anniversary of the company, it is housed in a 40mm classic case and encompasses the same smooth curving lines as the inaugural model. However, in this instance, the case is formed of Grade 5 titanium, imbuing the watch with a youthful temperament.

Created to mark the 10th anniversary of the company, the Classic Origin Opaline is housed in a 40mm case and encompasses the same smooth curving lines as the inaugural model. The case is constructed in Grade 5 titanium, the first time this lightweight alloy has been used by the company. Grade 5 titanium is widely used in both the medical field and the aviation industry because of its impressive array of benefits. It is strong, lightweight, corrosion-resistant and hypoallergenic. The watch is equipped with the brans’s ’Ball-shaped’ crown. Beyond its graceful appearance, the scale and shape of the crown facilitate ease of adjustment.

The case is constructed in Grade 5 titanium, the first time this lightweight alloy has been used by Laurent Ferrier.

The hand-wound Calibre LF 116.01, visible via the exhibition case back, is refined to the highest order. The movement is equipped with a free-sprung balance and a Breguet overcoil. This latter combination enhances precision, mitigates positional errors and improves isochronism. The firm’s beloved long-blade ratchet system is another highlight of this movement. This system, emblematic of Laurent Ferrier, offers a very pleasant feeling when the watch is wound as well as an inimitable sound, characteristic of the most demanding timepieces. Assuming the Classic Origin Opaline is fully wound, it will run autonomously for 80 hours, courtesy of its admirable power reserve.

The long-blade ratchet system is another highlight of the hand-wound Calibre LF 116.01 that is emblematic of Laurent Ferrier. 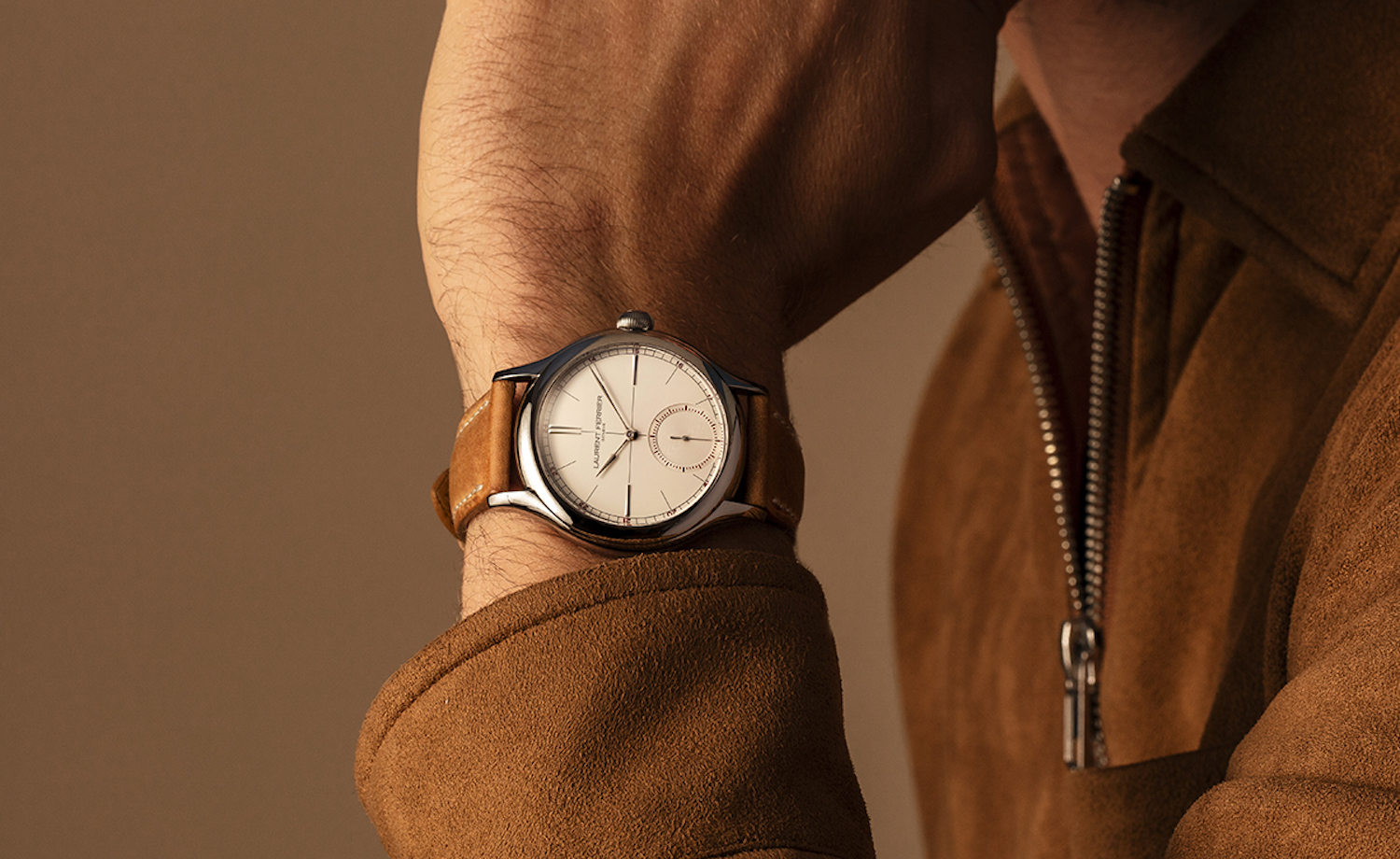 While the Calibre LF 116.01 is simpler than some of the company’s complicated movements, it still encompasses the high-end finishing found on every other Laurent Ferrier creation. The bridges are decorated with a softly-spoken microblasted, black rhodium finish and hand-polished edges. Each screwhead is mirror polished and the escapement bridge is gracefully adorned with a hand-made interior angle, consistent with the Maison’s fastidious attention to detail.

The Laurent Ferrier Classic Origin Opaline has a light brown Barbialla calf leather strap, lined with Alcantara. Paired with a titanium pin buckle, this lightweight combination provides a stylish accompaniment to this timepiece.