For the brand’s 130th Anniversary, Doxa Watches is launching the SUB 300 in 6 colors and 12 versions. It also introduces rubber straps in colors for a tone-on-tone match with the dials, a first for its collections and a sporty alternative to the steel bracelet.

For the brand’s 130th Anniversary, Doxa Watches is launching the SUB 300 in 6 colors and 12 versions. It also introduces rubber straps in colors for a tone-on-tone match with the dials, a first for its collections and a sporty alternative to the steel bracelet.
I

n 1967, Doxa launched the revolutionary SUB concept, considered to be the first truly purpose-designed diver’s watch for a broad audience. The radical innovations it introduced at the time quickly made it the benchmark for professionals, too. Rated to a depth of 300 meters (30 ATM), it was the first of its kind to feature a unidirectional bezel with dual markings for dive times and depths for calculating and monitoring no-decompression dives.

At the time, the US Navy no-decompression dive table was the be-all and end-all, enabling divers to first determine and then monitor the time they could remain at a predetermined depth and still ensure a safe return to the surface – without having to make a decompression stop on the way back up. Doxa engineers took the US Navy’s calculations and incorporated them into two separate scales on the bezel, one orange for the outer « depth » ring and the other black for the inner « time » ring – a Doxa patent.

The first to feature a bright orange dial, in daring contrast to the conventional black or white diver’s watches of the day, the instantly recognizable SUB 300 soon became a legend in its own time.

Starting 1968, the SUB 300 became easy to spot on the wrists of divers jumping from the deck of the Calypso every week to take millions of TV viewers on the thrilling missions of “The Undersea World of Jacques Cousteau” Team Undersea Odyssey". Already a living legend back then, Commander Jacques-Yves Cousteau – co-inventor of the Aqua Lung underwater breathing apparatus and spiritual father of modern scuba diving – was so fond of the SUB 300 that he secured exclusive distribution rights in the United States for his company, US Divers.

From 2015, the SUB 300 has been available as a limited edition in only three dial colors with orange, black and silver. 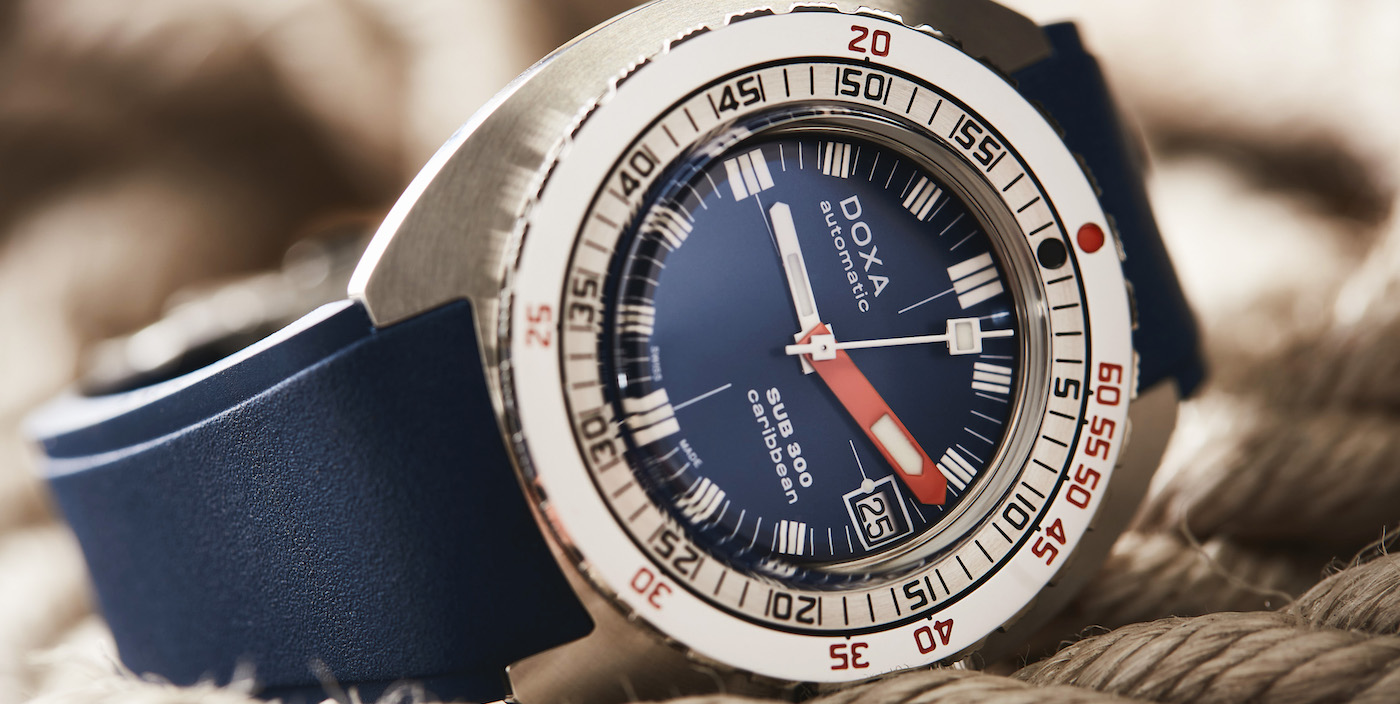 For the brand’s 130th Anniversary, Doxa Watches is launching the SUB 300 in 6 colors and 12 versions, all vibrant, bright, full of summer zest and ready for adventure: Orange Professional, Silver Searambler, Black Sharkhunter, Navy Caribbean, Yellow Divingstar, and Turquoise Aquamarine. Not to forget the iconic “beads of rice” bracelet, also made of stainless steel.

Doxa Watches introduces rubber straps in colors for a tone-on-tone match with the dials, a first for its collections and a sporty alternative to the steel bracelet. Made from soft and supple rubber, these new straps come with the Doxa hallmarks on both sides and provide an amazingly comfortable fit.

Resistant to wear and tear and purpose-designed, the strap features a folding clasp with the “Doxa fish” symbol and comes with a diver’s extension for quick and fiddle-free adjustment over a wetsuit. 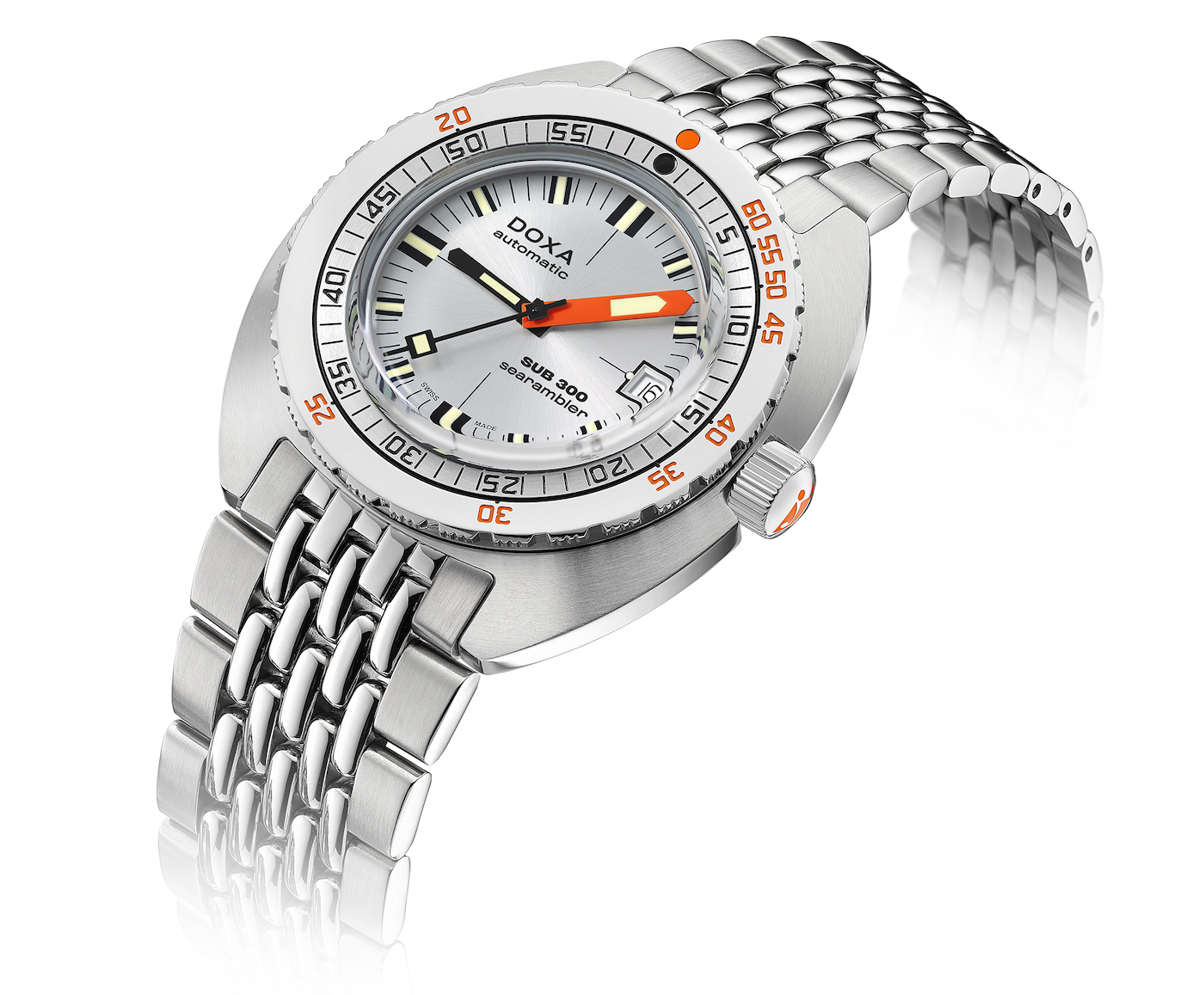 Thus, the 2020 edition of the SUB 300 remains true to its roots while embracing the times in which it lives. The rubber strap exudes not just a sportier but also a more urban vibe: an evolution that takes this watch concept into the future, with a high-performance material at the service of functionality.

All the self-winding mechanical movements that power the SUB 300 undergo the rigorous certification process of the hallowed COSC (“Contrôle Officiel Suisse des Chronomètres”), which guarantees the timepiece’s chronometric performance and scrupulous compliance with the highest standards in terms of precision, reliability, shock resistance, automatic winding and ease of maintenance.

The SUB 300 has a diameter of 42.5 mm and is water resistant to a depth of 300 meters for maximum freedom of undersea exploration. Its scratch-resistant sapphire crystal, treated with an antireflective coating, echoes the domed plexiglass of the first SUB generations. The COSC-certified automatic movement ensures a power reserve of 38 hours.

All dive-related markings have a Super-LumiNova® luminescent coating to ensure optimum readability during dives under low visibility conditions. The indices are clearly visible, as is the dual indication of dive time in minutes and depth in feet on the patented unidirectional rotating bezel for calculating and monitoring no-decompression dive times.

The inserts of the diving scale through the inner ring of the bezel are black, with a dot at 12 o’clock. The depth indications in meters on the outer bezel ring are in color – either orange, yellow or blue – for visual differentiation, with a Super-LumiNova® dot at 12 o’clock.