For this new creation, in a series strictly limited to 8 pieces, Jaquet Droz has chosen its Petite Heure Minute as its canvas. With its off-centered dial at noon, it offers a large surface on which Jaquet Droz has deployed the magic of its Ateliers d’Art.

For this new creation, in a series strictly limited to 8 pieces, Jaquet Droz has chosen its Petite Heure Minute as its canvas. With its off-centered dial at noon, it offers a large surface on which Jaquet Droz has deployed the magic of its Ateliers d’Art.
T

he Dragon is one of the few mythical creatures that has both a terrestrial and celestial nature. This winged reptile, inhabiting land and air, is an endless source of inspiration of legends and tales. The Dragon transcends cultures and millennia, from Africa to the Nordic countries through Asia and especially China.

Jaquet Droz presents a very exclusive interpretation of the Earth Dragon, the fifth element in the 60-year cycle of the traditional Chinese calendar. For this new creation, in a series strictly limited to 8 pieces (Numerus Clausus), Jaquet Droz has chosen its Petite Heure Minute as its canvas. With its off-centered dial at noon, it offers a large surface on which Jaquet Droz has skillfully deployed the magic of its Ateliers d’Art.

The dial of this “Petite Heure Minute Relief Dragon” was carved from so-called “Spiderman” jasper, named after its web-like mineral veining. The dial, that juxtaposes brown, ocher and burgundy, is entirely cut, softened and polished by hand, making each piece unique in its nuances. It features a smaller dial in absolute black onyx, with two red gold hands. Like a precious treasure in perfect harmony with the dial, we find an onyx bead underneath it, a symbol of well-being, luck and prosperity.

At the center of the dial, the Earth Dragon appears as a relief appliqué, emerging from the watch’s surface. Hand-engraved in 18-karat solid yellow gold, the mythological animal seems to go over and under the jasper dial in several places, encircled in the fire details of its 41 mm case, made in 18-karat red gold. Each scale and claw, as well as the Dragon’s eyes and tongue, are chiseled by hand. The piece plays with light, shadows and reflections to give life to a truly “animated” work, in the etymological sense: endowed with a soul. 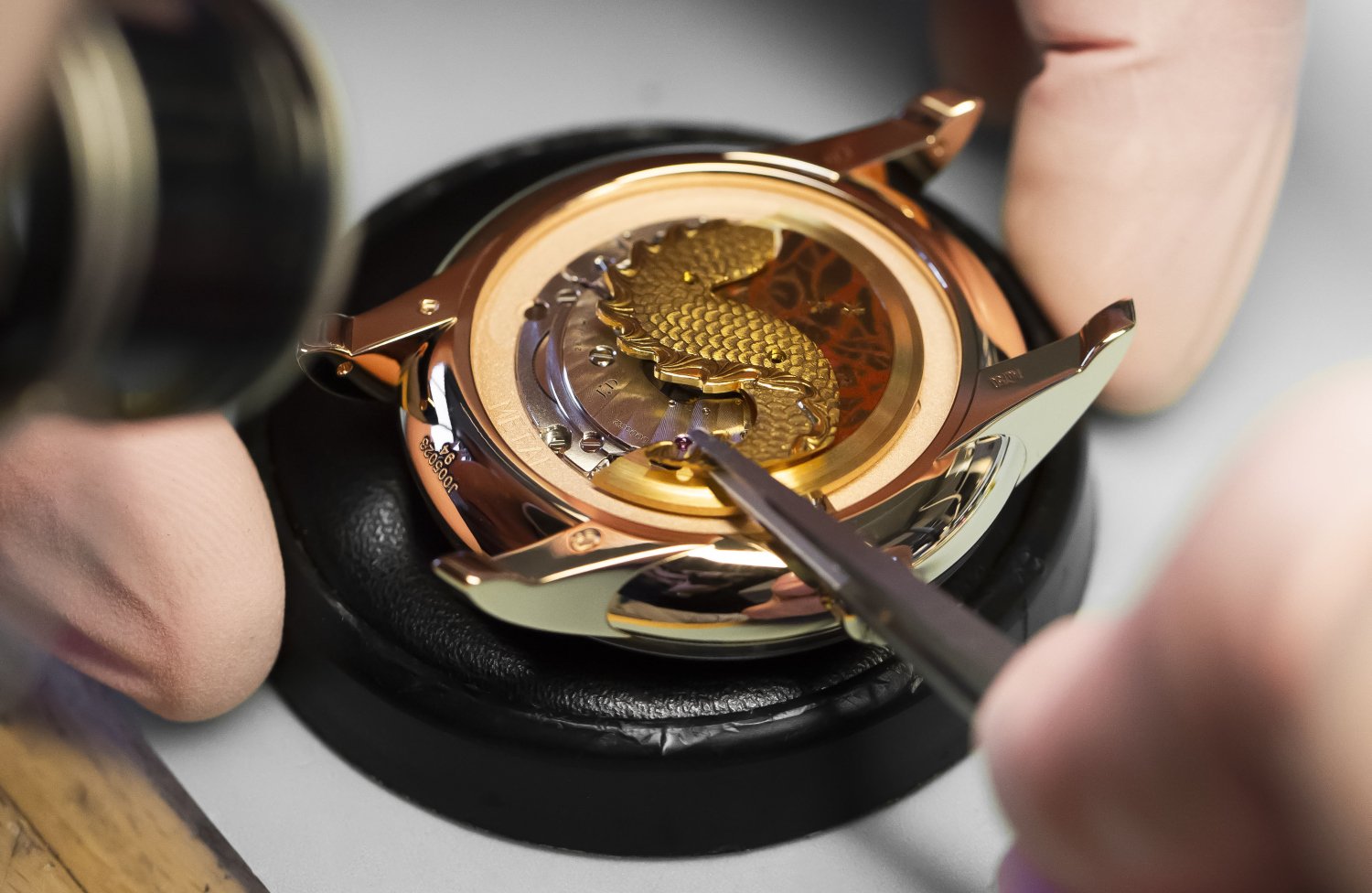 Rare among the Jaquet Droz limited series, the creation on the dial side continues on the caseback side, with an oscillating weight also made of Spiderman jasper, and adorned with a gold engraving of the body of the Dragon on the dial side. The watch’s movement is therefore intertwined with the creature’s reptilian body, giving the illusion that they are one and share the same heart. With a 68-hour power reserve, this self-winding mechanical movement, completed with a silicon balance spring and pallet lugs, is decorated with Côtes de Genève and is resistant to temperature changes and magnetic fields. It comes with a Certificate of Authenticity signed by the craftsmen who provided their talent and passion for this creation, embodying the “Philosophy of the Unique” so cherished by Jaquet Droz. 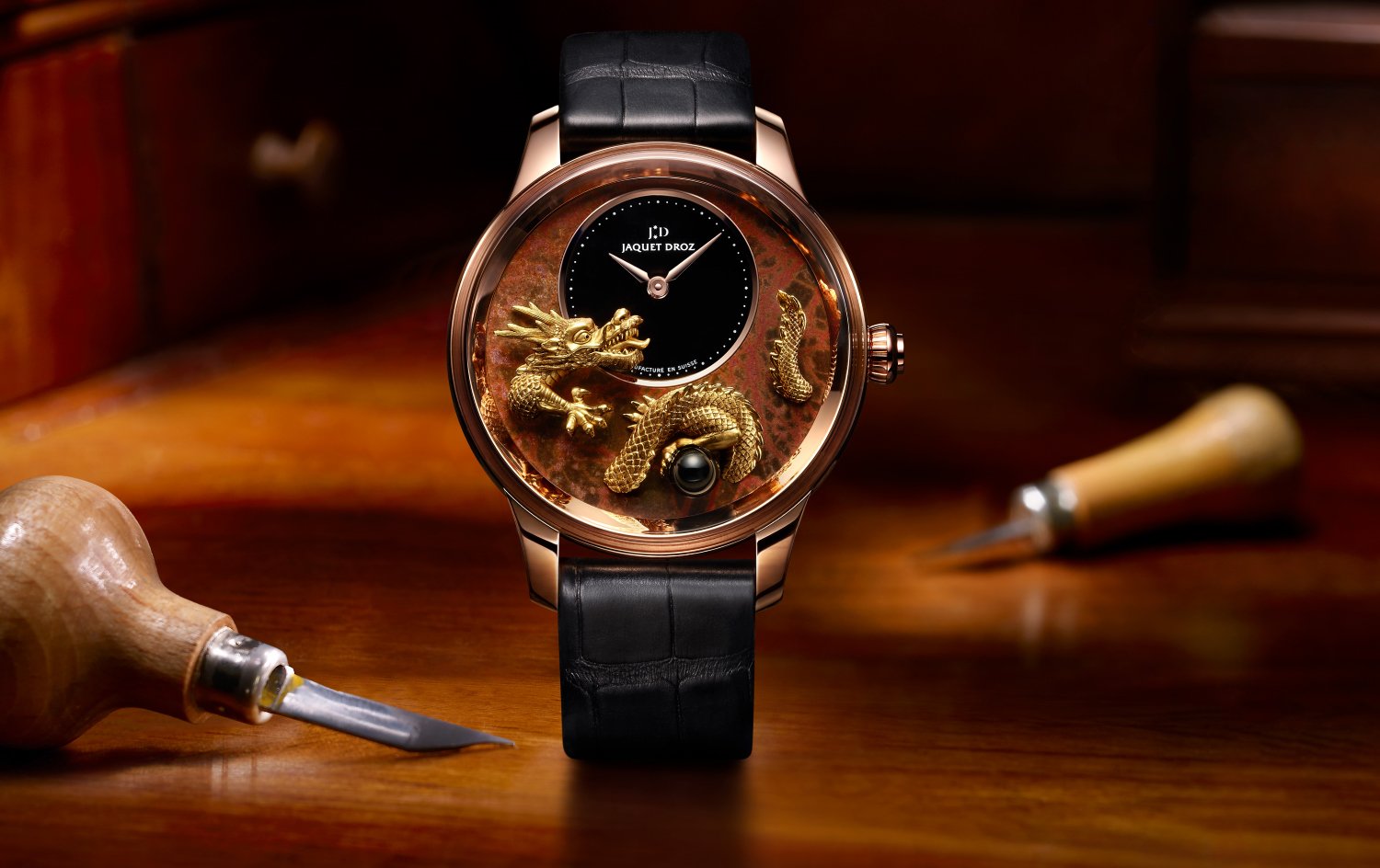