Every new creation is a world unto itself. A wholly new space born of a play between spirit and sensation. Singular yet timeless, innovative and performance-driven, the RM 72-01 Lifestyle In-House Chronograph is poised at the intersection between Haute Horlogerie, dance and music. Movement is all. Movement of time, of bodies, of notes.

Every new creation is a world unto itself. A wholly new space born of a play between spirit and sensation. Singular yet timeless, innovative and performance-driven, the RM 72-01 Lifestyle In-House Chronograph is poised at the intersection between Haute Horlogerie, dance and music. Movement is all. Movement of time, of bodies, of notes.
T

he RM 72-01 Lifestyle In-House Chronograph, the latest ‘face’ of Richard Mille—the ultimate metronome of emotion—is a work in which technicity serves and drives elegance. It’s also an in-house creation, featuring the first flyback chronograph entirely developed and designed by the brand. An achievement crowning no less than 30 months of full-time work on the part of a dedicated team.

The new RM 72-01 keeps time, three beats to a measure, a rhythm emphasising three numbers: three, eight and eleven. Three beats for the three counters that immediately capture every eye. The hands dance in stylised harmony within their three respective timescales (blue for seconds, orange for minutes, green for hours), orchestrated by a six-column wheel.

The transfers from minutes to hours have been isolated from the seconds wheel in this flyback chronograph which incorporates a double oscillating pinion mechanism developed and patented by Richard Mille. The brand has submitted a patent application for its double-clutch chronograph. This pinion, which can enmesh or withdraw from the gear teeth, has been twinned. There’s now one for the minutes and another for seconds.

This system is thinner than a vertical clutch, which would be hard to fit into the heart of the movement,’ explains Salvador Arbona, Technical Director for Movements. As a result, the chronograph function has little impact on the power reserve. The Calibre CRMC1 thus remains quite slim, at just 6.05 mm thick, despite comprising 425 different components. 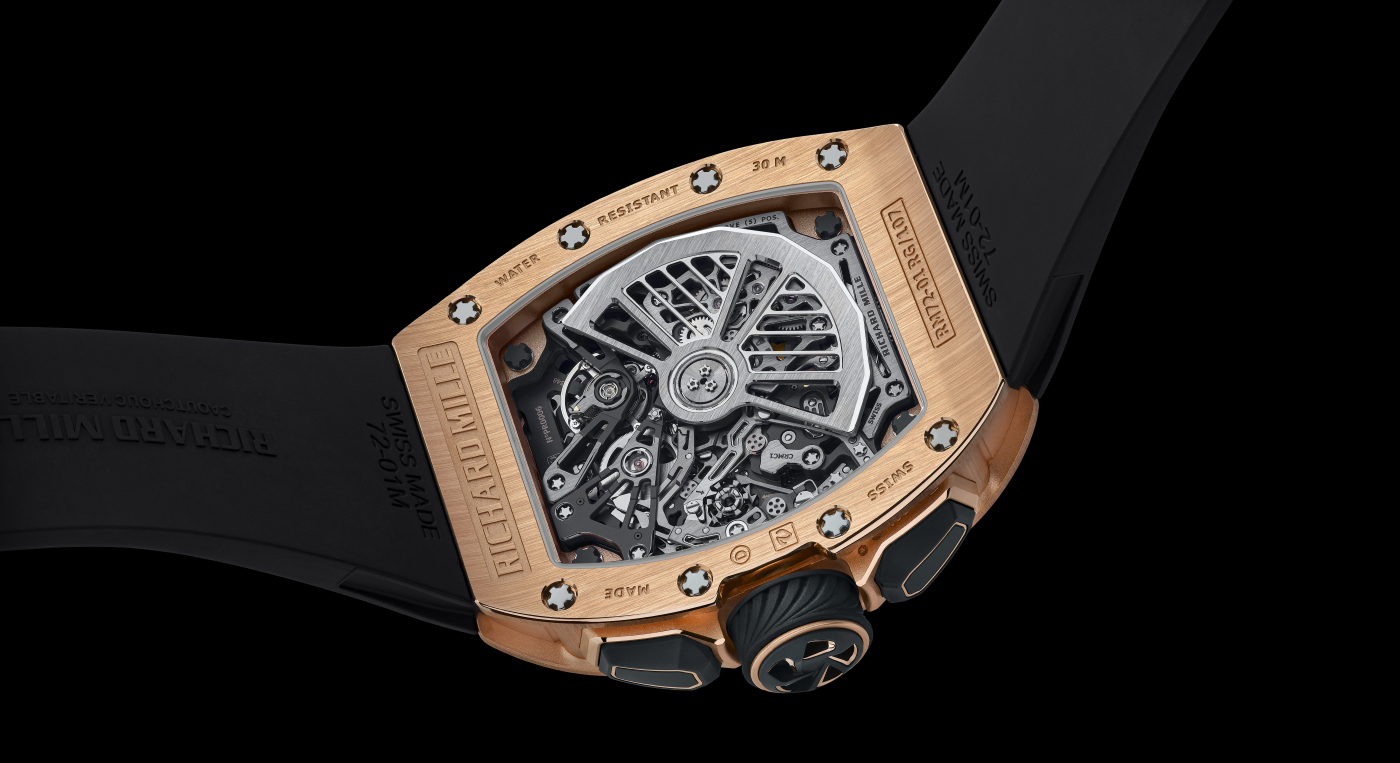 Equipped with 24-hour and 60-minute counters positioned at 5 o’clock and 2 o’clock respectively, it proves that a chronograph need not be limited to timing only short periods. This mechanism was entirely imagined, manufactured and assembled in Les Breuleux, at the brand’s facilities. Its sublime precision can be viewed through its openwork caseback, a hallmark of the Richard Mille brand. 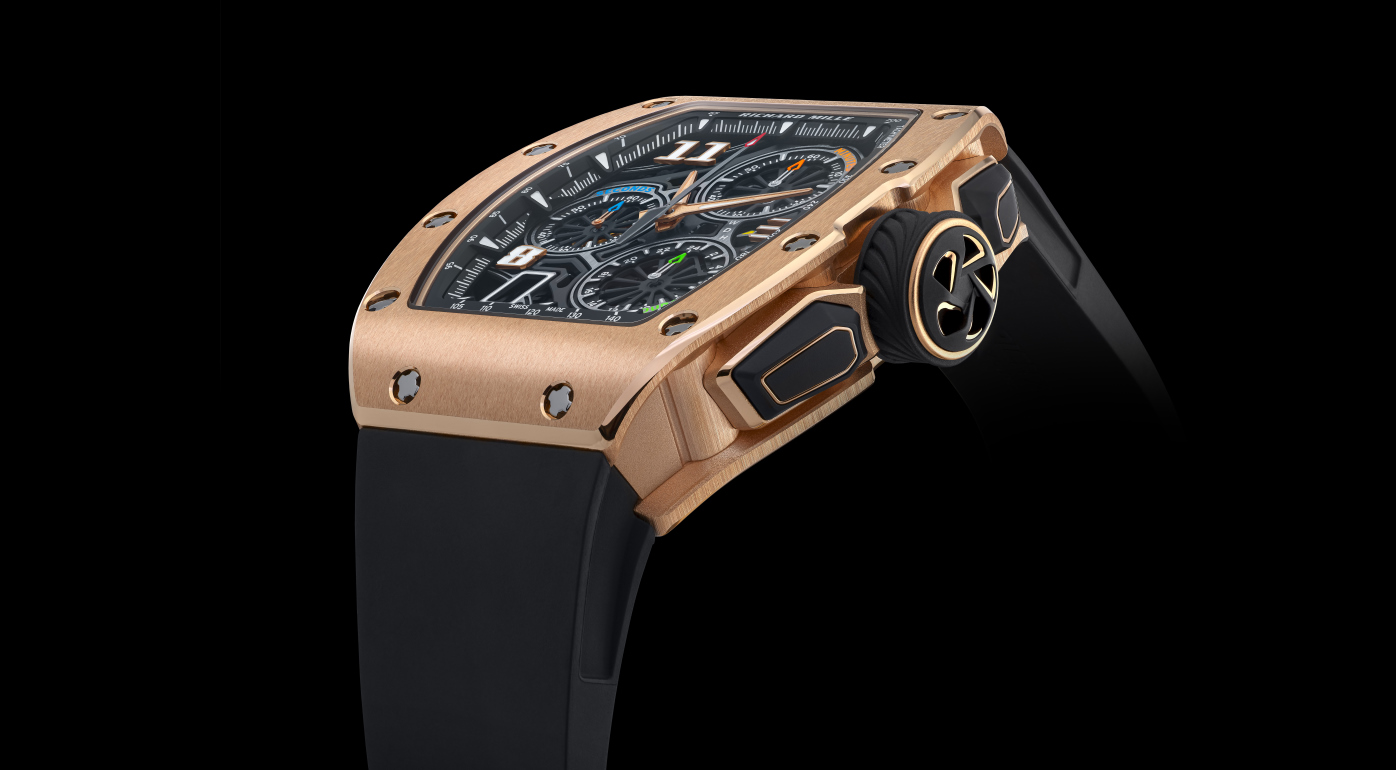 This model is available in four different combinations—5N red gold, titanium and black or white ceramic. It features an automatic winding movement, with a 50-hour power reserve irrespective of how much the chronograph is activated. It is a strikingly architectural watch offering true ease of use. Embodying pure mechanics and hand finishing, it is designed for everyday use.

It was evident that renowned artists such as choreographer Benjamin Millepied and composer Thomas Roussel would be needed to fully express in technical and artistic terms, the tremendous ambitions of this project. Like Richard Mille, both of these hybrid creators have built their oeuvre, WITHIN, on a resolutely singular vision and an obsession with perfect timing and harmonious movement. 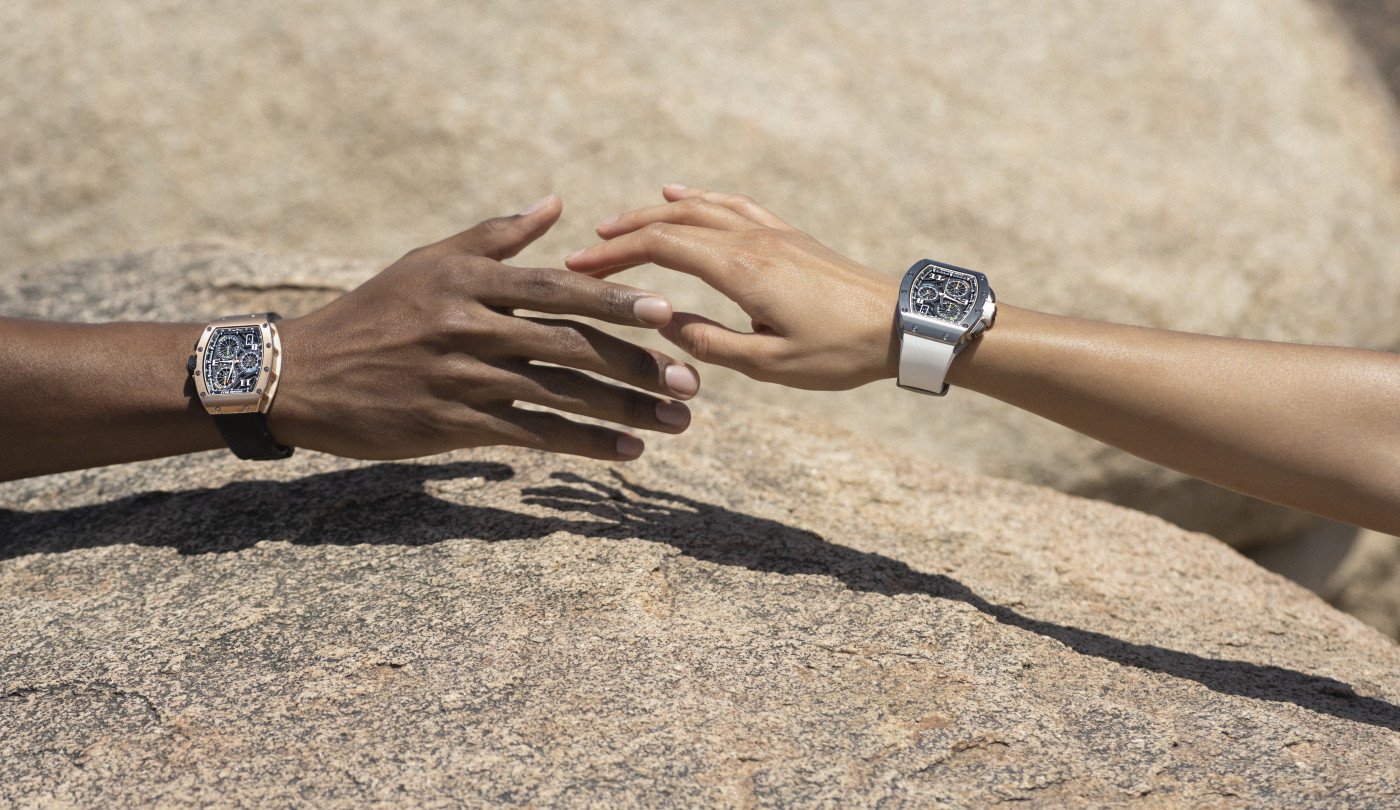 Be it in the realm of ballet or symphonic orchestra, Benjamin Millepied and Thomas Roussel both rely on a wealth of heritage and tradition to shape modern visions of their respective arts. They fashion singular works that powerfully combine the quintessence of their disciplines and their contemporary sensibilities. And it is precisely this hybrid synthesis of science and emotion that prompted them to embrace the watchmaking brand’s new project.

For their a work titled WITHIN, Benjamin Millepied took place behind the camera this time, at the Joshua Tree, in the heart of sand and stone. This stark mineral environment exalts the nobility and beauty of the materials Richard Mille employs for its watches. Amidst this sublime decor, the dancers unfurl a choreography of cyclical parallels that sifts and winnows the seconds, clothing time and space with intense vitality and energy. 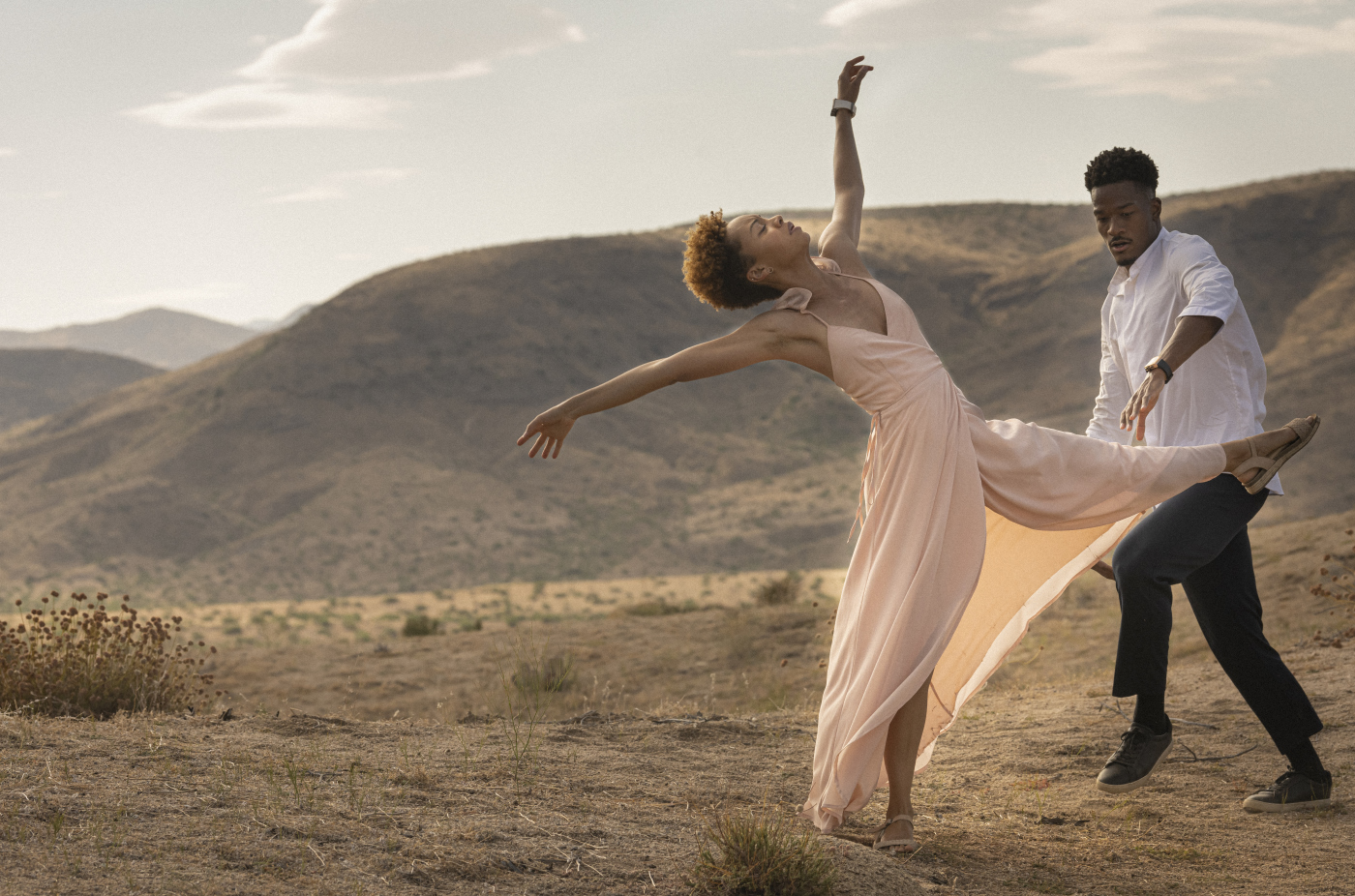 This mysterious setting, in which humanity appears to reconnect with our origins, was a perfect source of inspiration for Thomas Roussel. After sampling the watch’s chronometrice function, the compositor built a tempo around it, a musical rhythm anchored in the raw energy and abandon of the dancers. Around a whirlwind of vitality, he weaves a music redolent of origins, repetitive and mysterious. 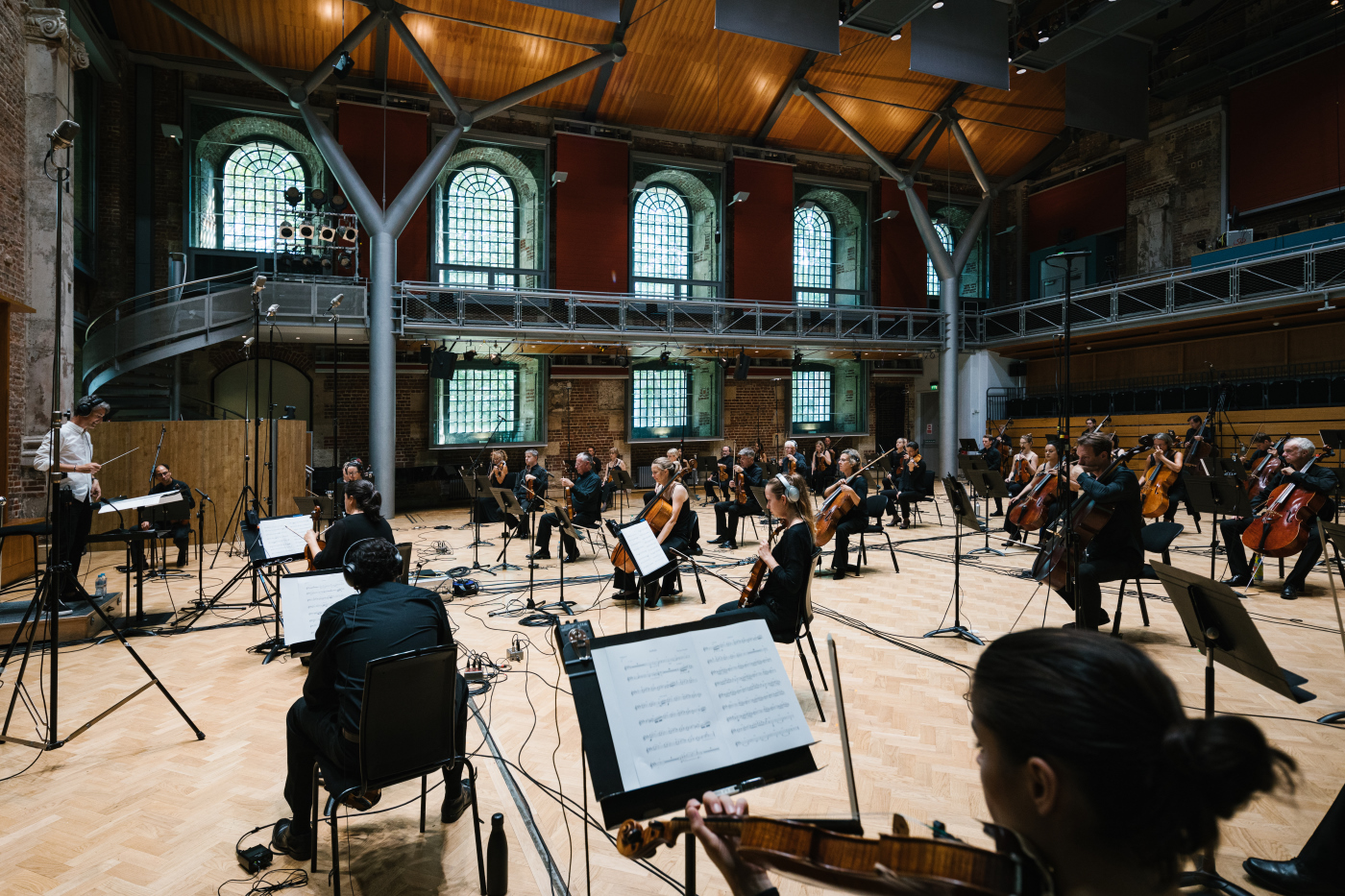 The composition was recorded by the fifty musicians of the prestigious London Symphony Orchestra in the studio at St. Luke’s church in London. The RM 72-01 Lifestyle In-House Chronograph encapsulates the original movement.

TIME.KEEPER With the introduction of Serpenti Spiga, Serpenti rises again, a forever-icon, reinvented anew for 2021. A symbol of perpetual renewal, Serpenti, the (...)