Patek Philippe reasserts its mastery of the “music of time” by launching its first wristwatch with a Grande Sonnerie in its purest manifestation. Presentation of a highly coveted and extremely elaborate sound function.

Patek Philippe reasserts its mastery of the “music of time” by launching its first wristwatch with a Grande Sonnerie in its purest manifestation. Presentation of a highly coveted and extremely elaborate sound function.
P

atek Philippe enriches its current collection by a wristwatch that features a highly coveted and extremely elaborate sound function: the Grande Sonnerie, that automatically strikes the full hours and the quarter hours.

This grand complication, exceptionally rare in a wristwatch, is complemented with a petite sonnerie (that does not strike the quarter hours), a minute repeater (that strikes on demand), and with a patented jumping subsidiary seconds. The Ref. 6301P Grande Sonnerie has a new 703-part movement, cased in platinum as well as a black dial in grand feu enamel; it will round out and recrown the unique collection of Patek Philippe repeater timepieces. 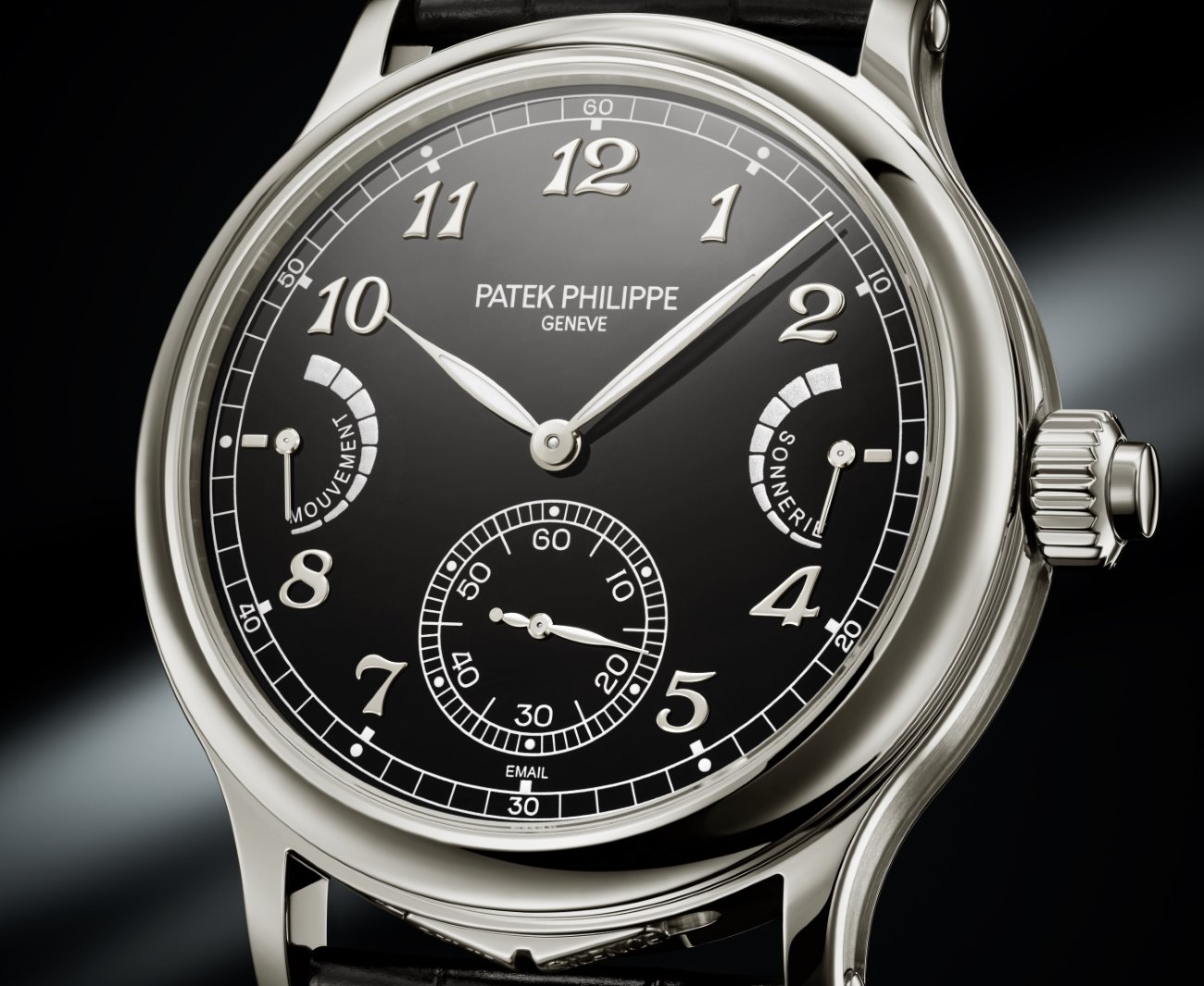 The acoustic indication of time is derived directly from the origins of mechanical timekeeping. In the 14th century, the clocks that graced Europe’s cities had neither dials nor hands. Instead, they sounded the full hours with an automatic strikework. The first portable spring barrel timepieces of the 15th century were often fitted with automatic chiming mechanisms as well. This also applies to the first 16th-century pocket watches.

The late 17th century saw the emergence of the first mechanisms that struck the time on demand – initially as quarter repeaters –, followed early in the subsequent century by minute repeaters. In 18th-century Geneva, the rules of the watchmakers guild required all artisans who wanted to become master watchmakers to demonstrate their skills by crafting a quarter repeater. This illustrates that mastering the acoustic indication of time was regarded as successful evidence of advanced horological know-how. 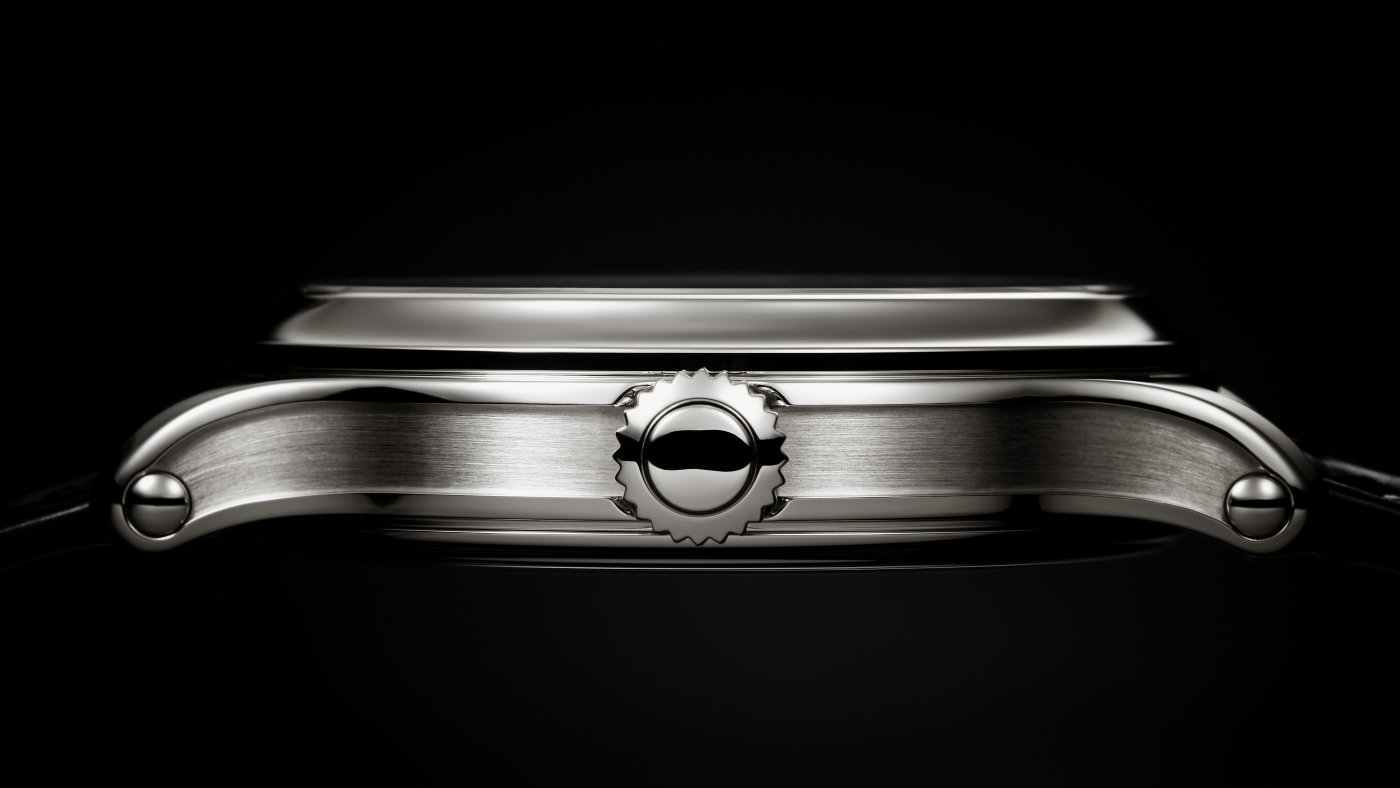 The Ref. 6301P Grande Sonnerie is the manufacture’s first wristwatch that presents the grande sonnerie as the epitome of horological complications in its purest form, complemented with a petite sonnerie and a minute repeater. It is an event long awaited by watch enthusiasts.

To implement the grande sonnerie as envisioned, Patek Philippe developed a new movement as a spin-off of the caliber 300 of the Grandmaster Chime. Given its 703 parts, the caliber GS 36-750 PS IRM is remarkably compact for such a complex mechanism (diameter: 37 mm; height: 7.5 mm).

One of the traditionally greatest difficulties for the engineers of grande sonneries is mastering energy flows and power reserves. Unlike in minute repeaters which must be triggered on demand by actuating a slide or a pusher, the grande sonnerie needs to have sufficient reserve power to automatically sound the required number of time strikes with uniform acoustic quality. 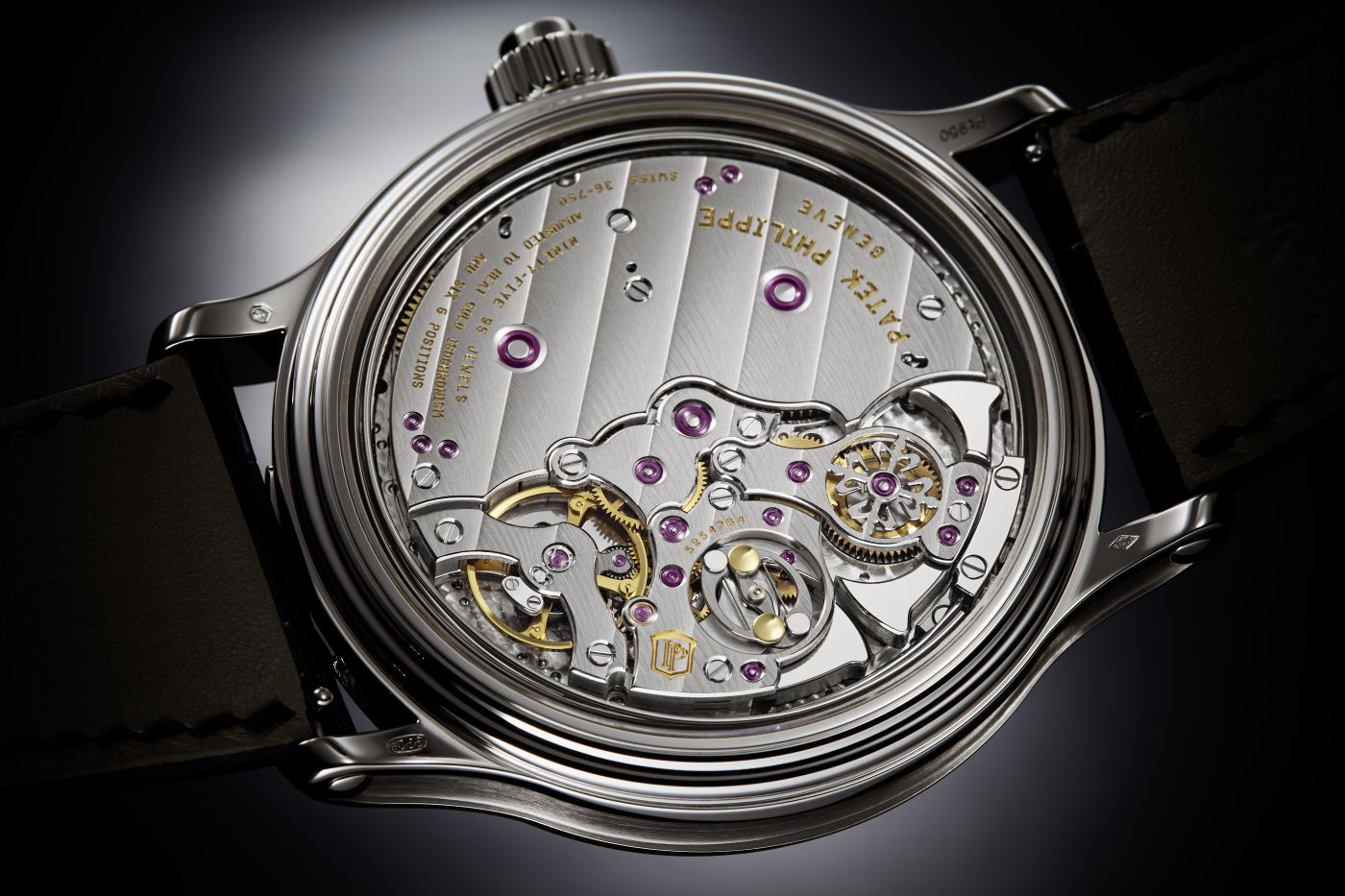 To address this challenge, Patek Philippe endowed the caliber GS 36-750 PS IRM with two tandem-connected twin mainspring barrels, one for the going train and the other for the chiming mechanism. This configuration delivers a power reserve of 72 hours for the movement and of 24 hours for the strikework. A three-day power reserve for the movement is what can be expected of a modern watch that is worn daily, in keeping with the customer-centric creation philosophy of Patek Philippe.

The 24-hour power reserve for the strikework allows the watch to strike the full hours and the quarter hours during an entire day and thanks to a uniform torque characteristic to assure optimized sound intensity. The two twin mainspring barrels are wound with the crown pushed in and rotated clockwise to wind the going train and counterclockwise to wind the strikework. The four mainsprings feature slip bridles to avoid overtensioning. 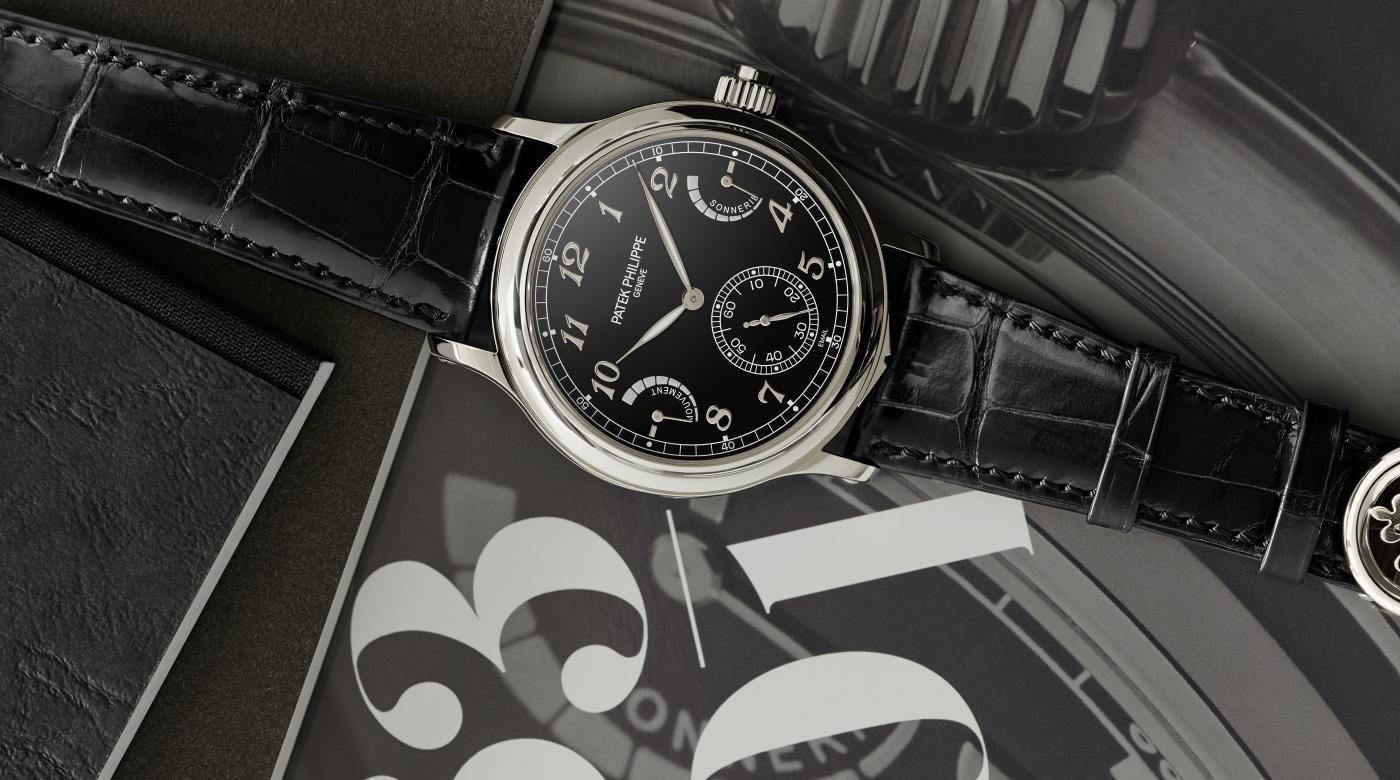 A strikework with three gongs

As regards the strikework, Patek Philippe opted for three classic gongs – low, medium, high. This technical option requires more energy than systems with two gongs. It also complicates the watchmaker’s work when tuning each gong until all three create the legendary “Patek Philippe sound” so coveted by connoisseurs.

Attached to the movement, the three gongs must not touch one another nor other parts of the case or movement despite the compact space in which they hover. Three hammers of identical size and mass guarantee a uniform strike for all three pitches. The selection of platinum as the case material also presented a challenge because it is difficult to master acoustically and requires Patek Philippe know-how that at the manufacture is handed down from one generation to the next.

Thanks to the energy stored in the twin mainspring barrel of the strikework, this adds up to an impressive total of 1056 strikes in 24 hours. The owner can also select the strikework mode petite sonnerie; it strikes the full hours but omits the repetition of the hours when striking the quarter hours. In the silence mode, the automatic time strike is switched off altogether.

The selection of the strikework mode is performed with a slide switch in the caseband at 6 o’clock. The petite sonnerie mode is on the left adjoining the grande sonnerie mode in the middle and silence on the right. This special feature is the subject of a patent that was already developed for the Patek Philippe Grandmaster Chime and describes a mechanism that enables the selection and activation of the strike mode with a single slide switch. Formerly, two switches were needed to execute these steps.

Another patent, also developed for the Grandmaster Chime, allows the complete isolation of the grande sonnerie in the silence mode, eliminating power consumption. On request, the minute repeater can be triggered by pressing the pusher in the crown at 3 o’clock. In response, it strikes the number of hours with low tones, the quarters with three-strike sequences (as in the grande sonnerie mode), and, on the higher-pitched gong, the number of minutes that have elapsed since the last quarter hour. The minute repeater can be triggered at any time, even if the slide is set to the silence mode. 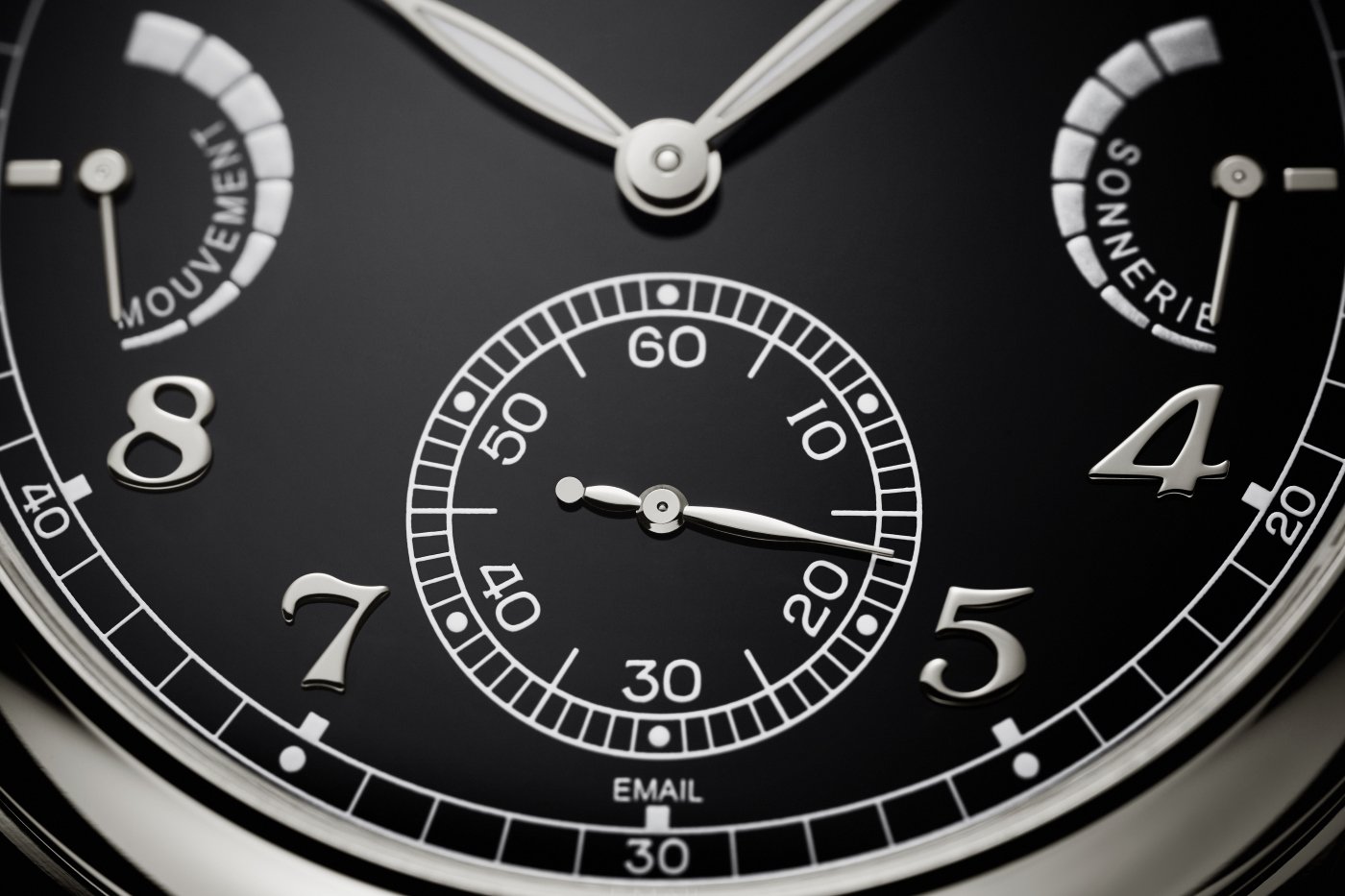 When they reworked the caliber 300 from the Patek Philippe Grandmaster Chime, the engineers and designers at the manufacture added a small jumping seconds display, which was never done with a grande sonnerie. Inspired by the four patents of the 175th-anniversary model, the Ref. 5275 Chiming Jump Hour, they endowed the new Ref. 6301P with an innovative jumping seconds mechanism. Its system does not rely on jumper springs as usual but instead with wheels and a release lever that instantaneously unblocks the wheel train every second, making energy consumption easier to regulate and control.

Thus, the new Ref. 6301P chiming watch presents a novel face characterized by the subsidiary seconds hand at 6 o’clock. With the blink of an eye, it jumps along the railway track minute scale from one second to the next, recalling the regulator clocks that were used in old watchmaking ateliers to synchronize the time. The new Ref. 6301P also benefits from the entire experience and the latest insights gained in the design and production of the commemorative watches crafted on the occasion of Patek Philippe’s 175th anniversary.

The new caliber GS 36-750 PS IRM – it can be admired through the sapphire-crystal case back – fulfills all the strict requirements of the Patek Philippe Seal. This applies to the technical parameters (rate accuracy, dependability) and to the finissage and attractive architecture of the individual components. Yet again, this clarifies the fact that at Patek Philippe, the complexity of a movement should never lessen its beauty and elegance, and like the case and the dial must measure up to the strict scrutiny of manufacture president Thierry Stern. 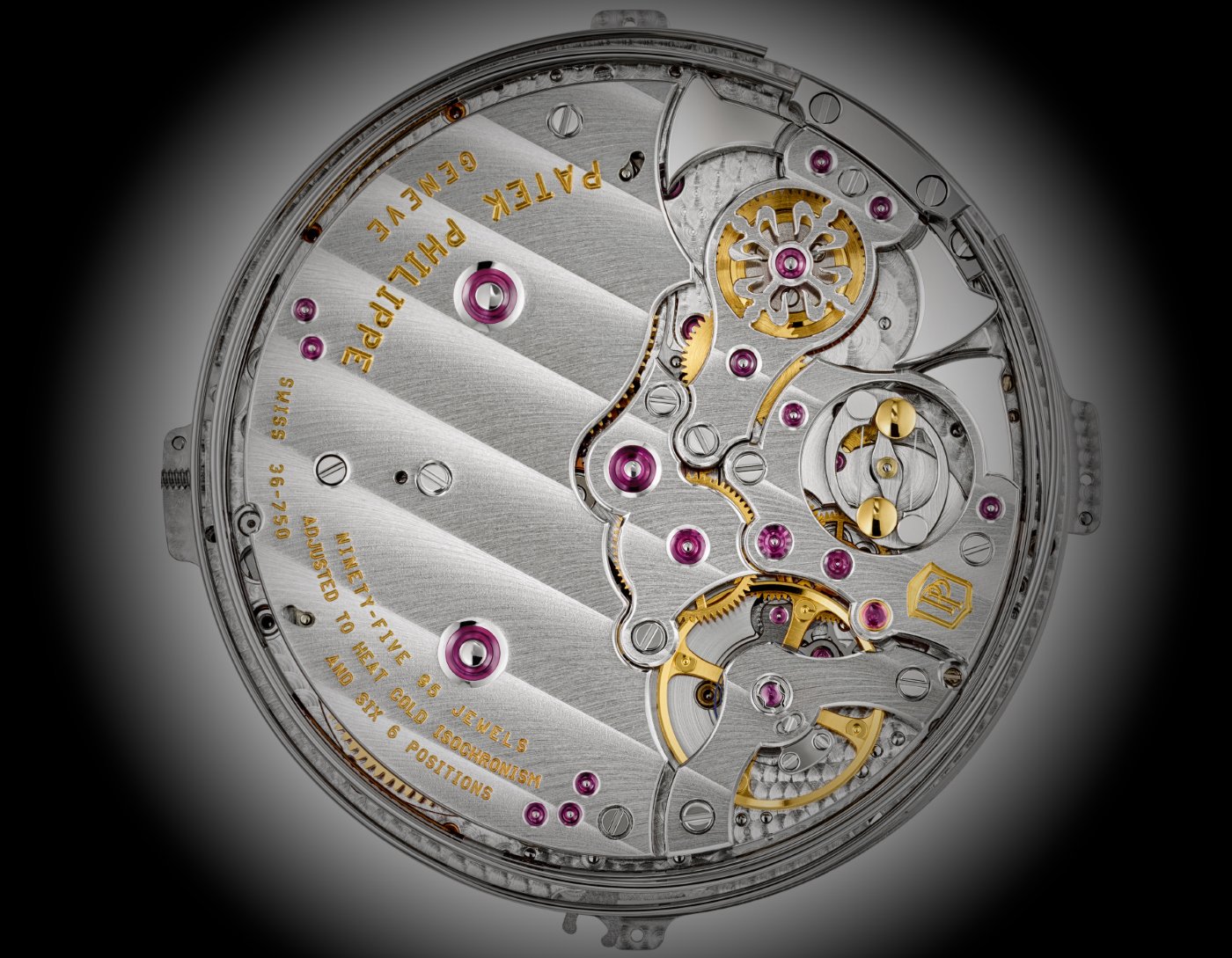 Special attention was devoted to the design of the movement bridges, especially the barrel bridge (a key element of grande sonneries) and the transversal balance cock (balance bridge), a Patek Philippe rarity that assures a secure seat and pleasing visual proportions. Connoisseurs will discover many other aesthetic details, including the many reentrant angles that are very difficult to polish. The centrifugal governor that regulates the speed of the time strikes is decorated with exquisitely smoothed and polished finishes that are now visible to the observer. 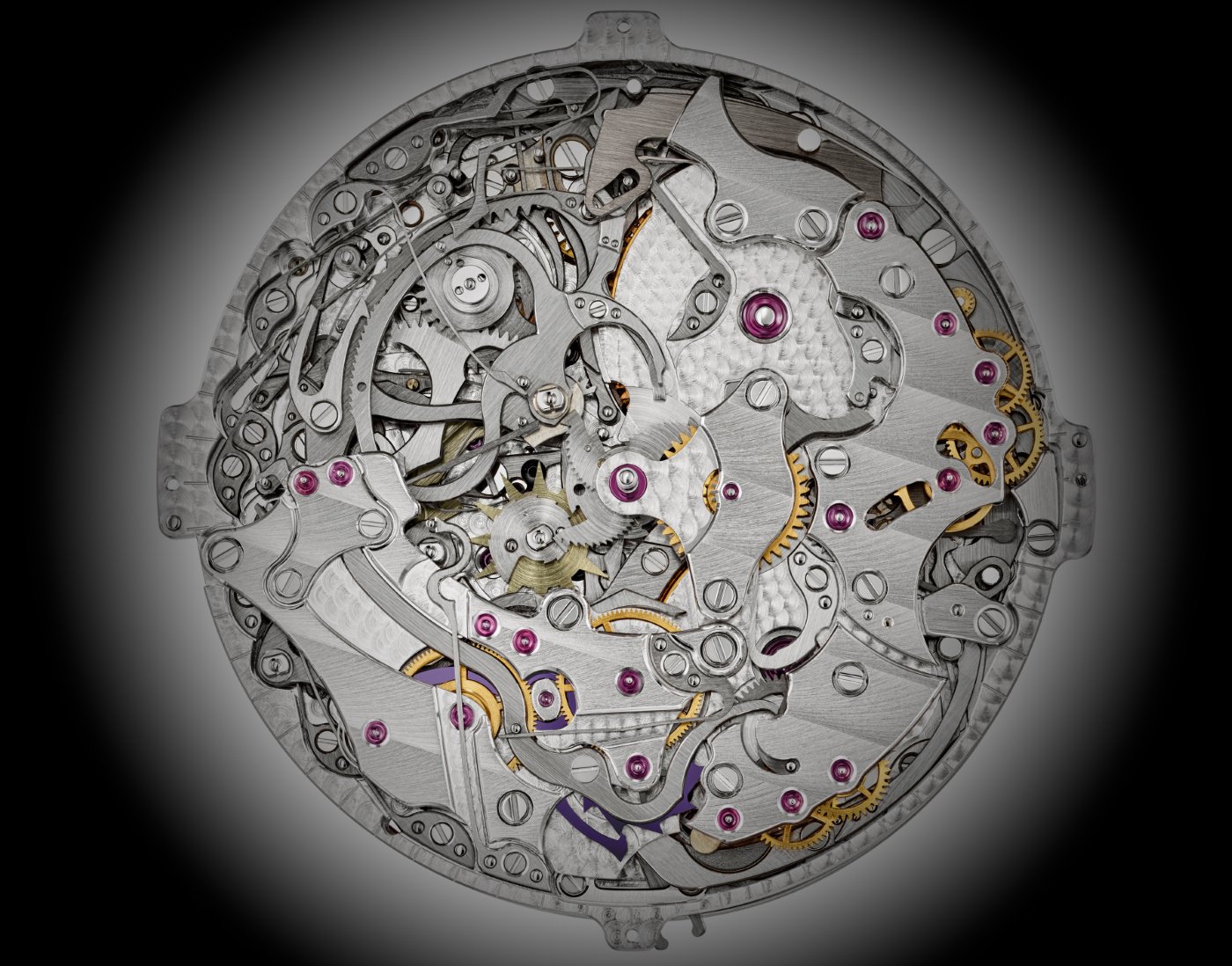 This spectacular movement is rounded out with a Gyromax® balance, the Spiromax® balance spring in Silinvar®, the three gongs coiled around the movement, and their respective hammers. The antireflective sapphire-crystal back positioned very close to the movement offers a fascinating glimpse into a micromechanical realm. It can be replaced with a solid platinum back that is delivered with the watch. 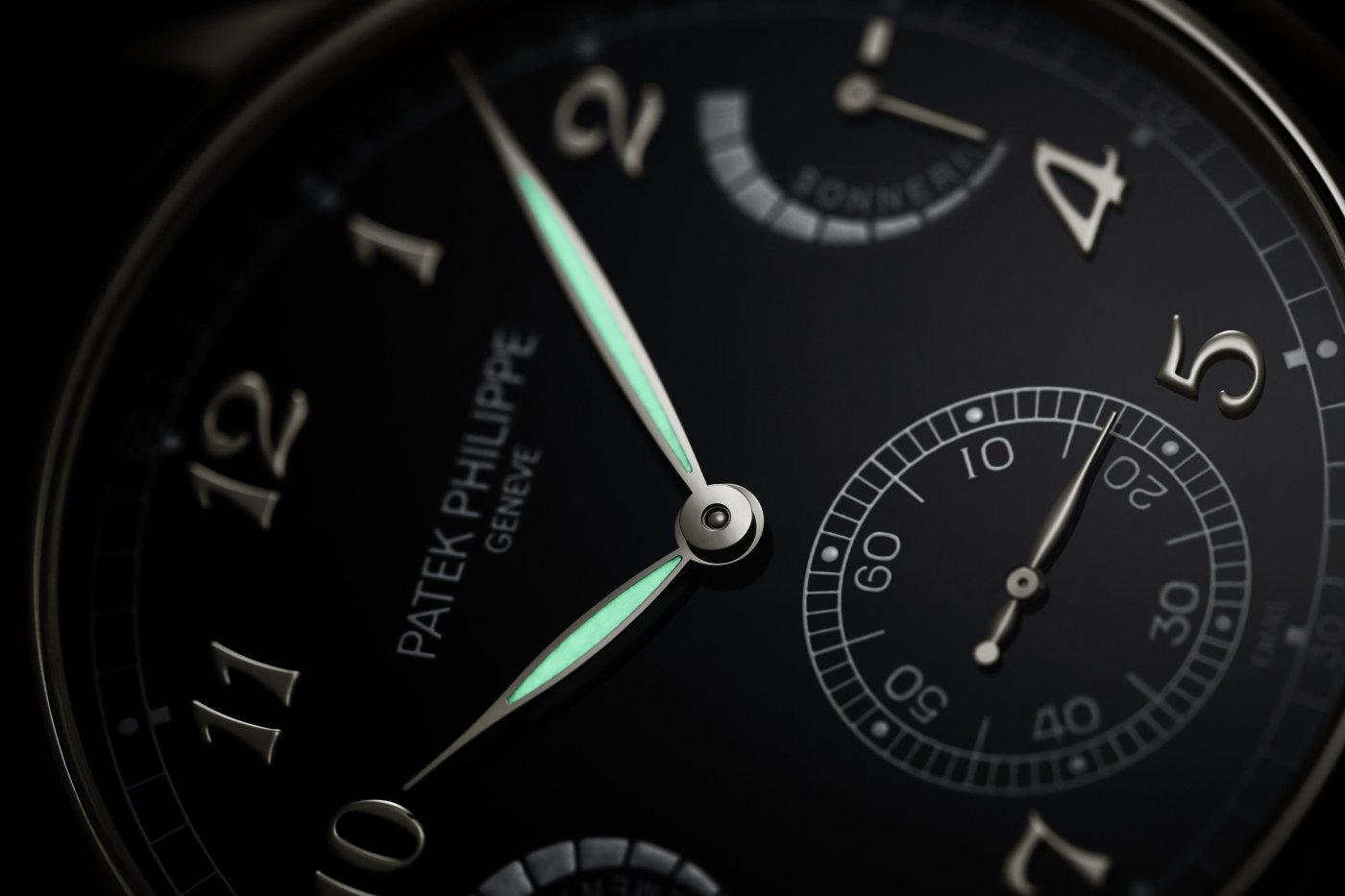 The livery: modern and elegant

The new Ref. 6301P Grande Sonnerie stands out with finesse, true to the Patek Philippe key principle that a grand complication must also be pleasant to wear in everyday situations. The platinum case, inspired by the Ref. 5370 split-seconds chronograph presented in 2015, expresses subtlety and balance in its curves and rounded contours, with the concave bezel for a perfect transition from the slightly cambered sapphire-crystal glass and the countersunk satin-finished case flanks. Like all Patek Philippe platinum cases, it sports a small diamond set in this instance at 12 o’clock because the usual 6 o’clock position is occupied by the slide switch for selecting the strikework mode.

Patek Philippe has leveraged its skills with respect to artisanship and rare handcrafts, notably on the black grand feu enamel dial with the “glacé” finish, applied Breguet numerals, and leaf-shaped hands in luminescent white gold. The slightly slanted Breguet numerals add a dynamic touch to the classic yet contemporary face.

The displays for the hours, minutes, and subsidiary seconds at 6 o’clock are well proportioned alongside two power-reserve indicators for the movement and the strikework at 3 and 9 o’clock with semicircular scales identified with the inscriptions MOUVEMENT and SONNERIE. The timepiece is worn on a hand-stitched shiny black Alligator strap with square scales and a fold-over clasp. 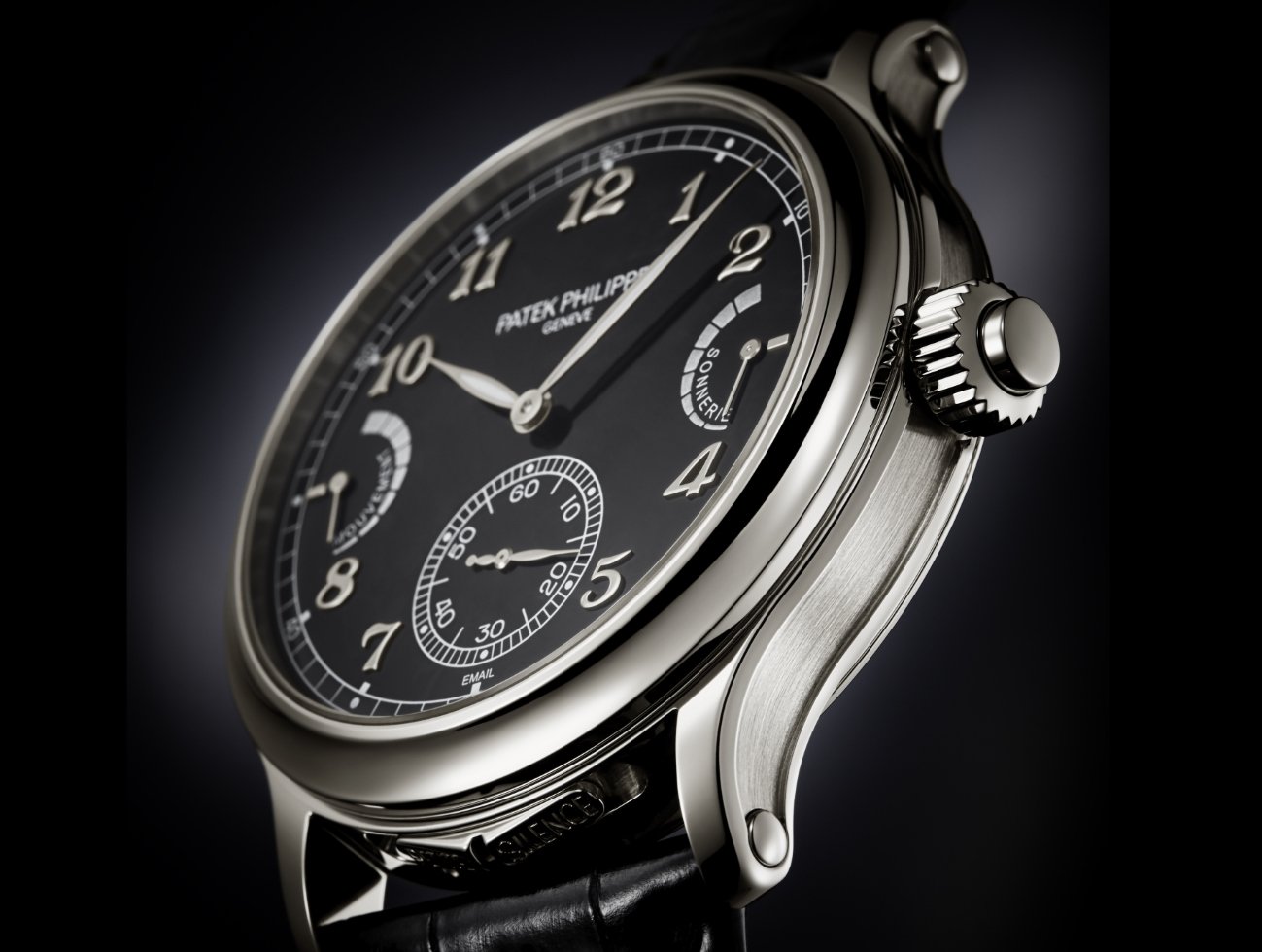 The relaunch of the 1989 minute repeater wristwatches gave Patek Philippe the opportunity to push the door wide open for the return of modern repeater timepieces. With the presentation of the Grandmaster Chime in the anniversary year 2014, now followed by the new Ref. 6301P as part of the regular collection (although its complexity limits production to a few pieces per year), the manufacture has opened up a new chapter that paves the way to new developments in the field of grande sonneries – much to the delight, aesthetically and acoustically, of all connoisseurs and aficionados who are passionate about the music of time.