On the seas, the wildest races abide by one essential rule: speed must be perfectly controlled to master the water’s surface. Mido presents a chronograph version of the Ocean Star – an unprecedented function in this marine-inspired collection.

On the seas, the wildest races abide by one essential rule: speed must be perfectly controlled to master the water’s surface. Mido presents a chronograph version of the Ocean Star – an unprecedented function in this marine-inspired collection.
O

n the seas, the wildest races abide by one essential rule: speed must be perfectly controlled to master the water’s surface. Mido presents a chronograph version of the Ocean Star – an unprecedented function in this marine-inspired collection.

One press of the pusher engages the chronometer at the start, then stops it as the finish line is crossed. The Ocean Star Chronograph also makes it possible to calculate the speed of racing boats thanks to its nautical tachymeter scale in miles. Its lines exude powerful elegance, entirely dressed in black and accented by yellow Super-LumiNova® and Mido’s iconic orange touches. 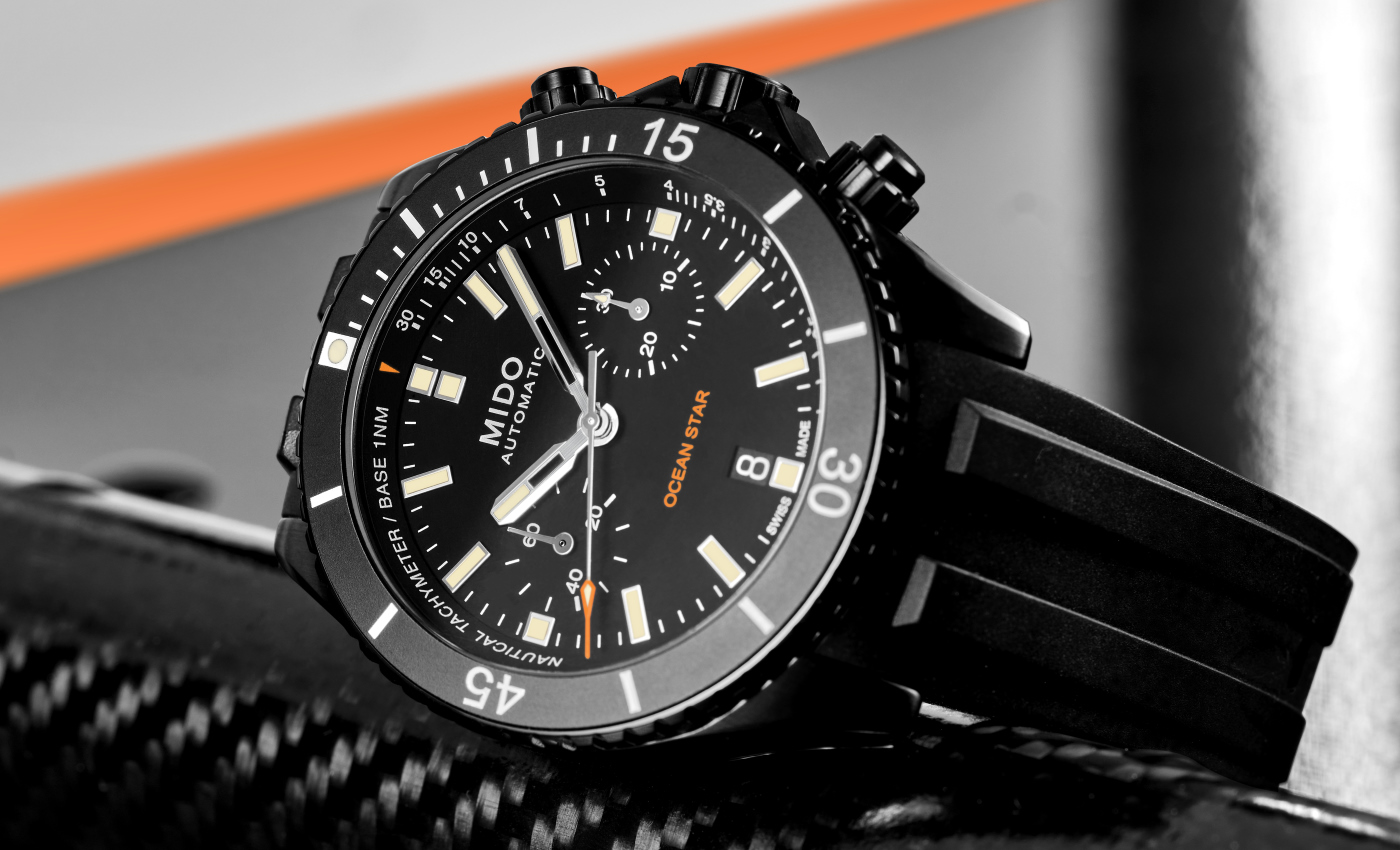 The performance of the Ocean Star Chronograph is ensured by a mechanical calibre with a power reserve of up to 60 hours, coupled with high-tech ceramic on the bezel. For as enthusiasts know, every detail counts: their talent must be able to count on the very best instruments.

At Europe’s southernmost tip stands an architectural construction, built to withstand any storm, that has unfailingly watched over the Gibraltar Strait since 1841: the Europa Point Lighthouse. Its powerful beam of light helps sailors to find their bearings on the often rough waters between the Atlantic Ocean and the Mediterranean Sea. Created by Mido in 1944, the Ocean Star collection is characterised by its reliability, just like this monument, built to safely guide men as they embark on new maritime conquests.

Mido chose sleek and contrasting aesthetics for the Ocean Star Chronograph. Its radiant indexes and diamond-cut hands adorned with yellow Super-LumiNova® stand out against the velvety black dial, as do the white graduations on the flange’s tachymeter scale. The sweep-seconds hand – the star feature of the chronograph function – catches the eye with its orange varnished tip as it glides across the dial. A 30-minute chronograph counter at 3 o’clock, a small seconds counter at 9 o’clock, and a white date numeral in a black aperture at 6 o’clock complete the display. With an anti-reflective treatment on both sides, the sapphire crystal presents a perfectly clear view of this effective dial and its strong contrasts.

Supplied with two thoroughly sporty interchangeable straps, this Ocean Star Chronograph asserts its powerful aesthetics in every last detail. The first strap is made from solid black rubber, while the second can count on the resistance of a black technical fabric with stitching in orange – Mido’s colour. 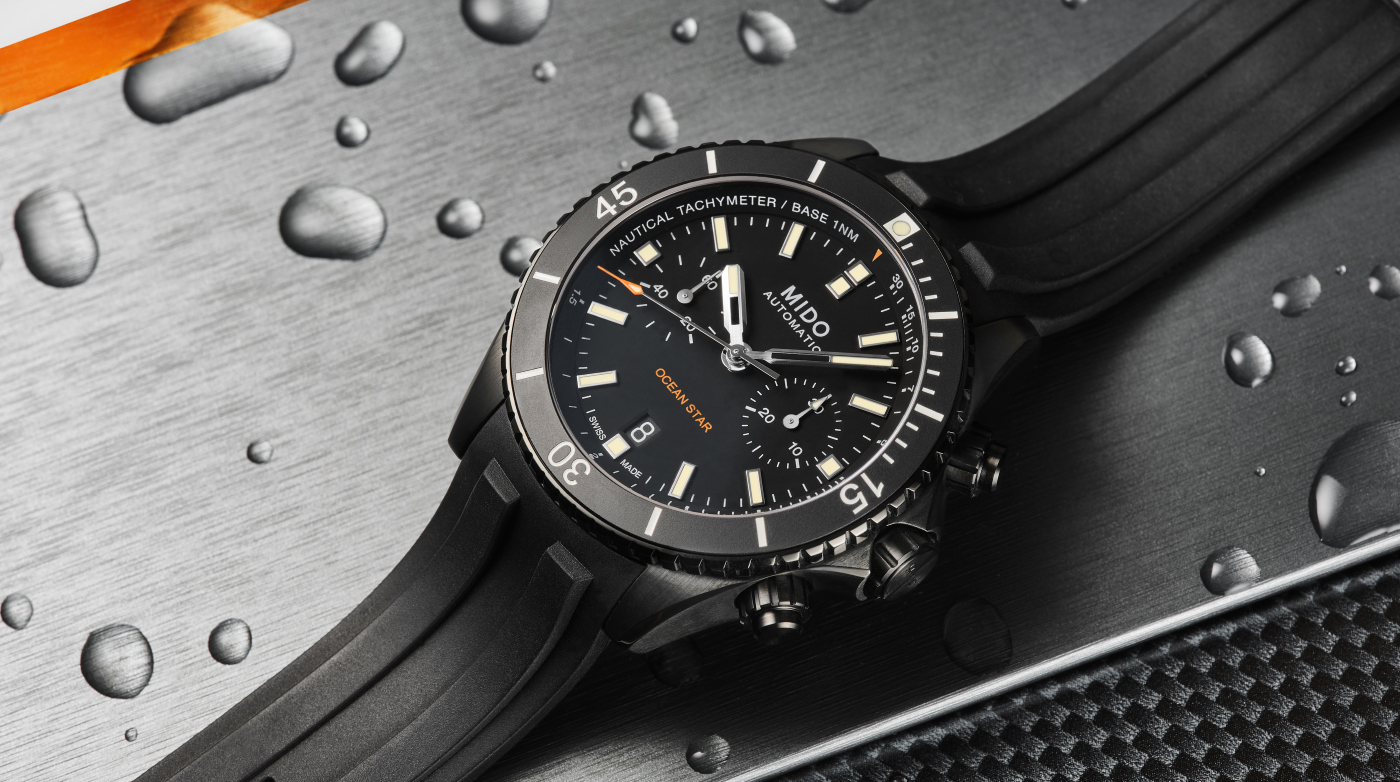 The Ocean Star Chronograph proves itself to be an essential instrument with several different uses. Firstly, its chronograph makes it an excellent companion for every kind of feat. Next, the dial enables speed in miles to be calculated across a precise distance – a nod to the nautical world of the Ocean Star collection. Finally, the rotating bezel in technical ceramic allows the wearer to make additional measurements by marking a time interval. As they are adorned with Super-LumiNova®, the indexes, hands and reference dot on the bezel even allow these functions to be used in the dark. 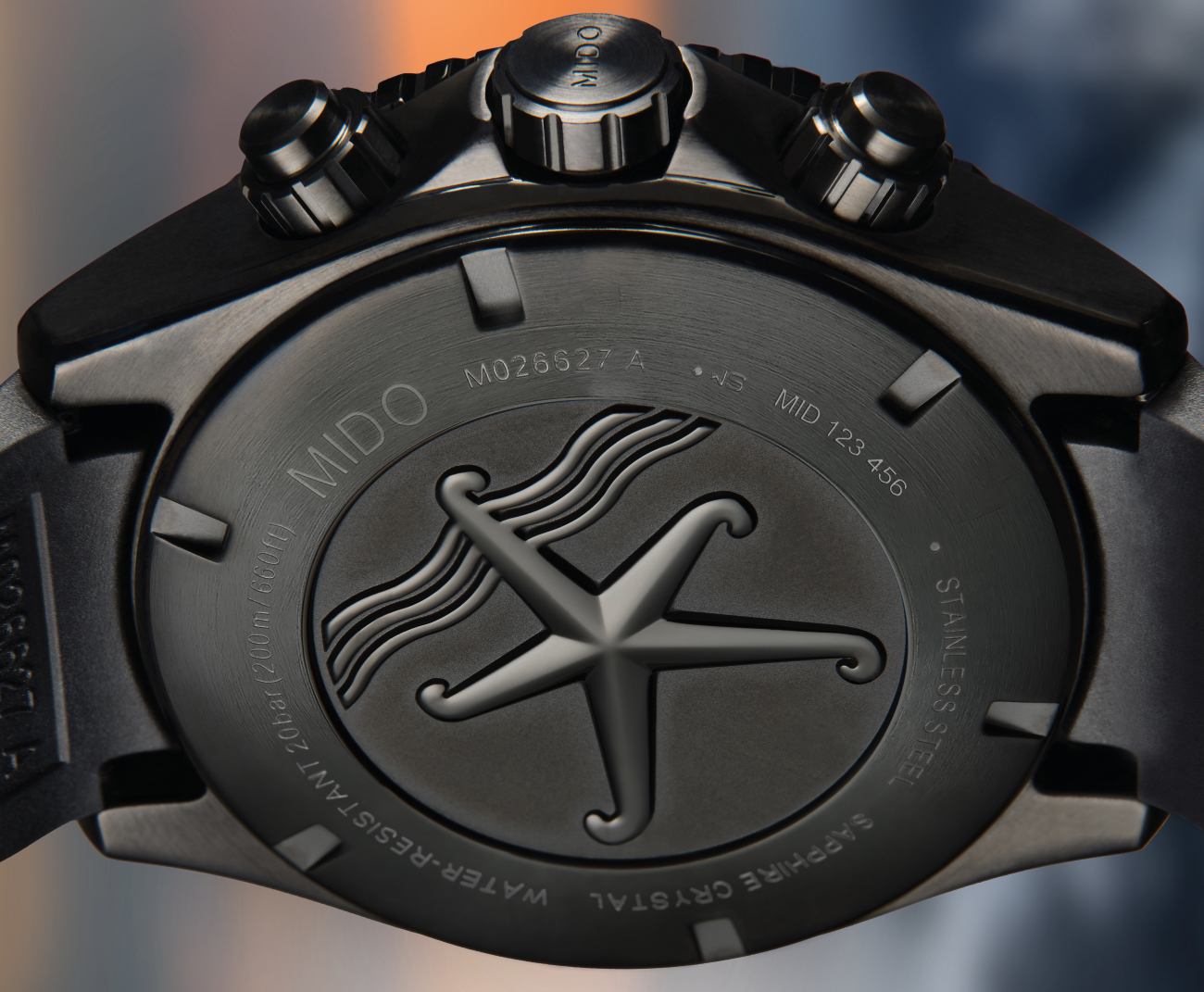 Made to meet the most demanding requirements, the Ocean Star Chronograph is driven by the Calibre 60, adjusted on three different positions for enhanced accuracy and equipped with a power reserve of up to 60 hours. It is housed in a robust black DLC-treated stainless steel case that exudes subtle elegance thanks to its alternating polished and satin-finished surfaces. The screwed case back reveals a polished starfish in relief. Water-resistant to 20 bar (200 metres), the model is perfectly suited for use on the seas.

This special edition is presented in a bespoke case with its additional strap. The Ocean Star Chronograph is also available in a titanium version with a blue dial and a matching ceramic bezel.