Blancpain sets sail for Taiwan by dedicating two individual models to one of the wonders of the animal kingdom bound up with the island’s history: the Formosa clouded leopard.

Blancpain sets sail for Taiwan by dedicating two individual models to one of the wonders of the animal kingdom bound up with the island’s history: the Formosa clouded leopard.
T

he Formosa clouded leopard, endemic to the island, is an important symbol in the collective consciousness of the Taiwanese. The Paiwan aboriginal people consider the leopard to be a spiritual icon. If not extinct, the animal is extremely rare.

Blancpain had a wish to represent this emblematic feline by drawing on its expertise in the realm of hand decoration. Like the Formosa clouded leopard, the artistic techniques practiced by Blancpain are rare in watchmaking. Some, such as miniature enamel painting, are only offered by a handful of watch companies worldwide. Others, such as shakudō, are produced exclusively by the Manufacture.

The range of Blancpain’s craftsmanship is vast and represents an age-old heritage. Five skills, fully integrated within the Métiers d’Art workshops at the “Farm” in Le Brassus – as is always the case at Blancpain – have been selected to interpret the theme of the Taiwanese clouded leopard on the dial: the art of porcelain, miniature enamel painting, shakudō, engraving and damascening.

The two one-of-a-kind models resulting from the meticulous work of Blancpain artisans represent the clouded leopard in its forest habitat. A skilled acrobat, this animal enjoys hiding in the trees. Trunks and foliage have been patiently painted or hand-carved in minute detail. The same naturally applies to the majestic feline. Also crafted using the enamel painting on porcelain and engraving techniques, along with shakudō, its tawny coat with spots reminiscent of clouds is strikingly realistic. 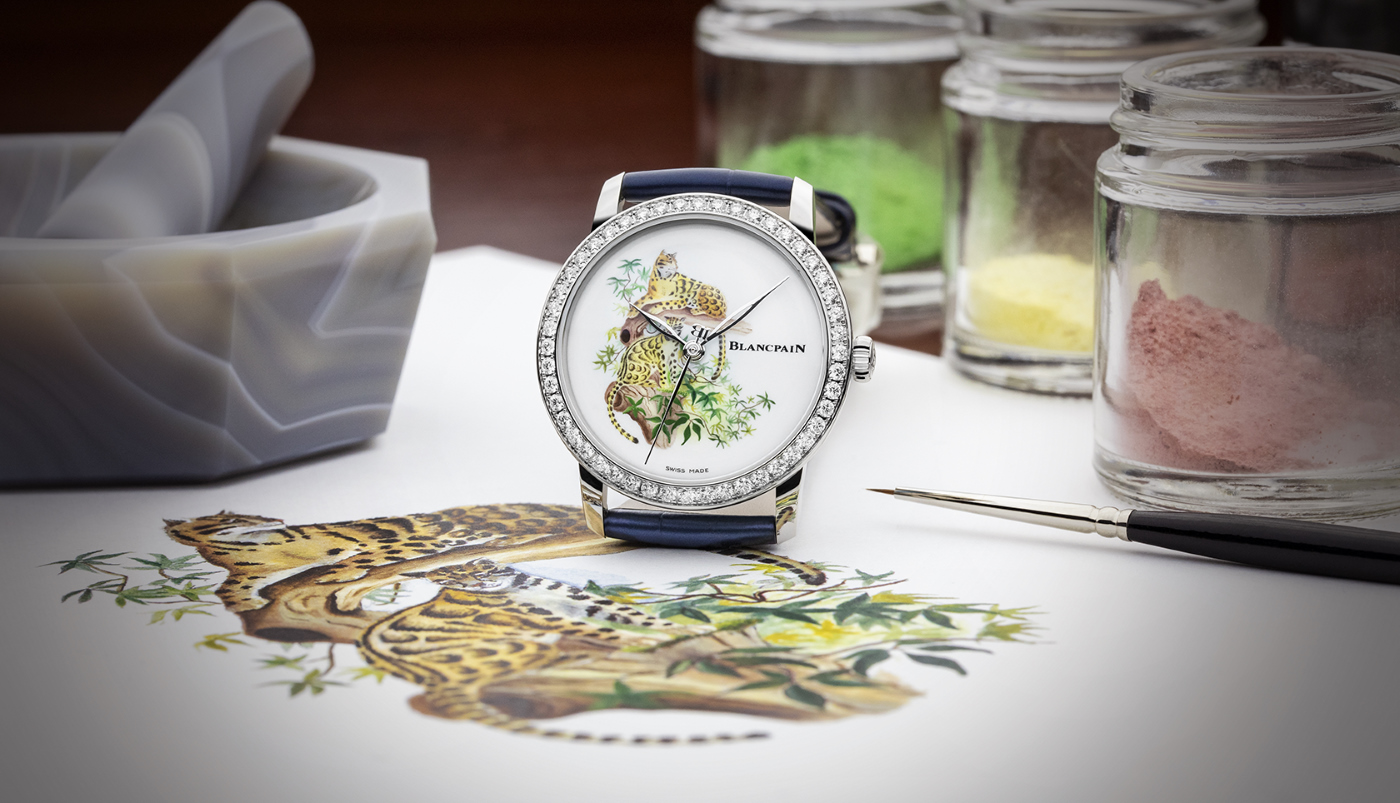 On the engraved model, the craftsmen of the Manufacture have gone so far as to inlay the panther’s whiskers hair by hair, made of gold threads almost as fine as a silk ribbon, in accordance with the art of damascening. The dials thus executed come to life beneath the artist’s fingers, giving rise to the kind of emotions that stem from blending aesthetics with technical perfection.

The Formosa clouded leopard enamel painted on porcelain is framed by a 33 mm white gold case with a diamond-set bezel. The accompanying movement is the Manufacture 1154 self-winding calibre, whose meticulous finishing is revealed through the back of the timepiece. The engraved and damascened shakudō model comes in a 45 mm red gold case. Traditionally favoured for highly decorative timepieces, the sapphire crystal caseback reveals the 15B hand-wound movement adorned with a Côtes de Genève motif. 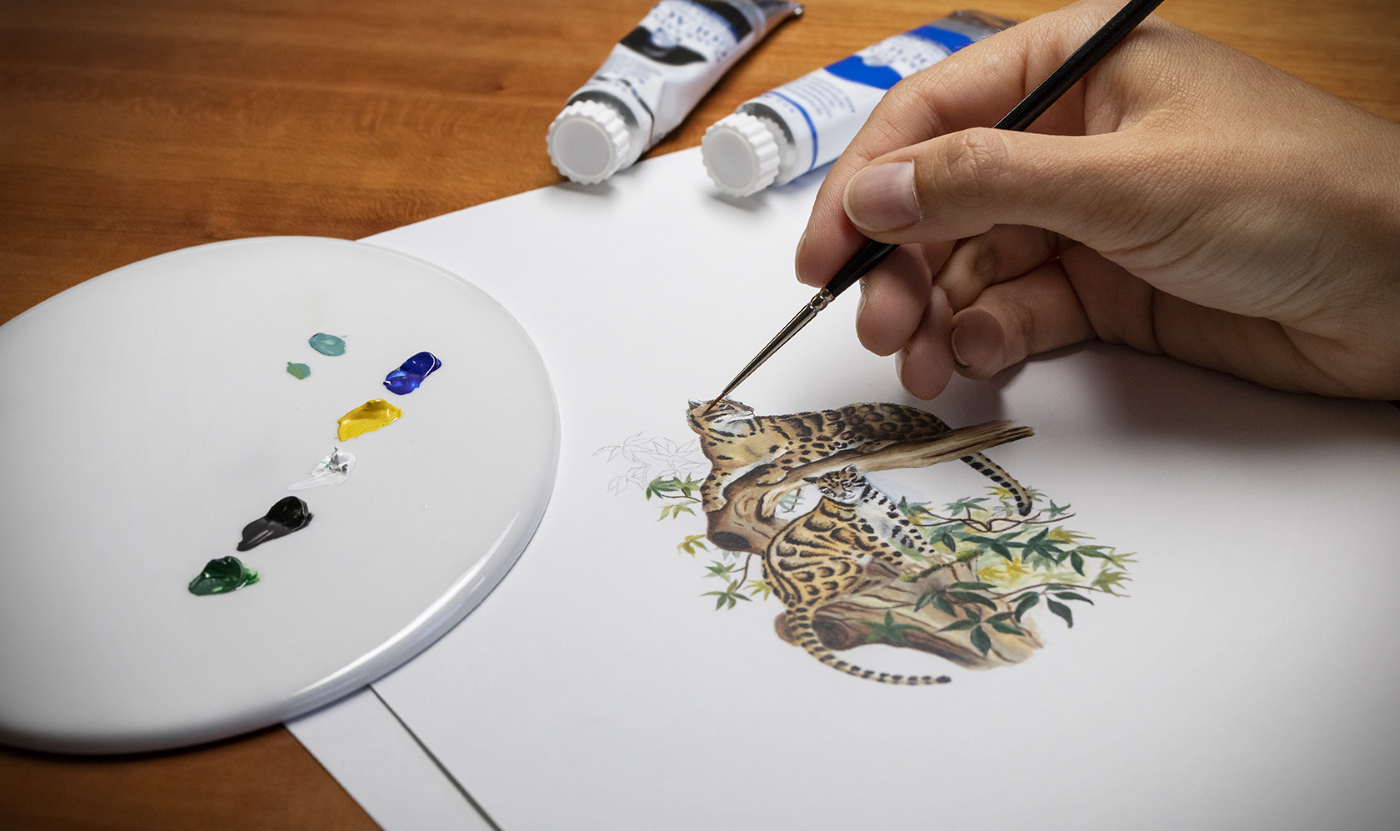 Miniature enamel painting is one of the numerous enamelling techniques carried out by the Blancpain Manufacture’s artisans in the Le Brassus “Farm”. The process of bringing painted enamel to a watch dial is particularly complex and begins with the fabrication of a surface for the painting. Blancpain’s enamel dials are elaborated following a series of steps punctuated by long drying and firing phases.

Presented in the form of a powder mainly composed of quartz, feldspar and kaolin, porcelain is first diluted in water. The resulting pulp is sieved and filtered to remove all residues and impurities, prior to being cast in dial-shaped molds. After demolding, the dials are dried for 24 hours before being fired at 1,000°C for 24 hours. This first step in the kiln hardens the dials and prepares them for enameling. Rigorously applied by hand to each dial, the enamel requires a second 24-hour firing at 1,300°C that serves to vitrify the porcelain and make it shiny, translucent and enduringly stable. Before any paintbrush touches the prepared surface of the dial, the artisans draw sketched studies of the image to be created. Often multiple trials are evaluated.

Blancpain’s craftsmen are looking for balance, not only with respect to the design itself, but also with regard to the way in which that design relates to other elements on the dial. Once the layout of the design has been decided, the next step is the preparation of the colors. The substance, based on enamel powder, is mixed to pine oil. The enamel painter makes his own palette in order to obtain the nuances that he needs. Certain shades originate from special recipes confected by Blancpain.

Once the colors have been readied, the actual painting can begin. Due to the small scale of a watch dial, artisans work with staggeringly fine brushes. Since the colors are enamel themselves, the painting must be followed by oven firing at a temperature of 1200°C. Each resulting dial is therefore unique, ensuring owners of an enamel painted porcelain Blancpain watch possess a one-piece only model. 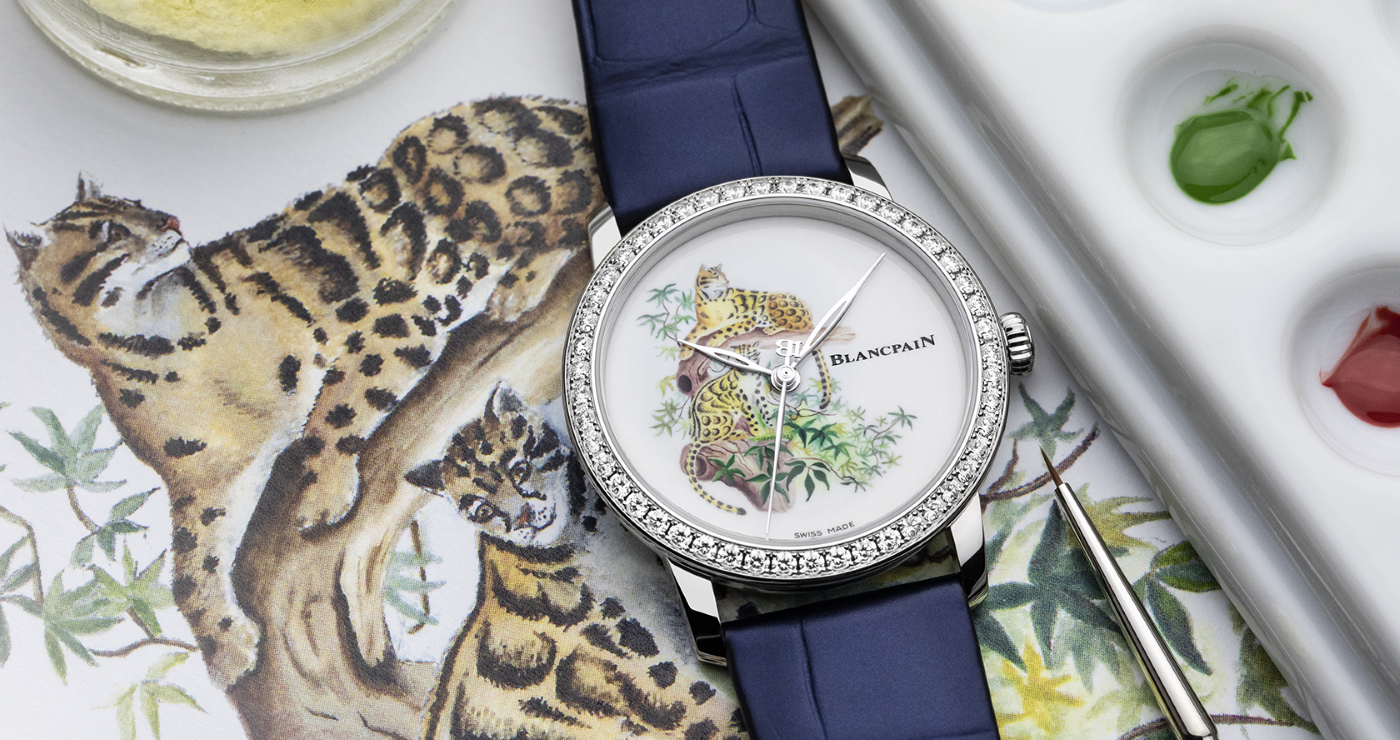 Shakudō is a centuries old Japanese art form favored by samurai to embellish small elements of their katana. Blancpain’s artisans use it to create one of- a-kind watch dials. The introduction of this craft in watchmaking emanates from the Manufacture’s innovative spirit, which constantly looks for new artistic techniques and unique decorative patterns matching its timepieces. Shakudō itself is a technique that transforms the color of a gold/copper alloy from its natural yellow/orange hue to a subtle nuanced black/gray.

Often, the surface is reworked to bring complexity and texture to the black/gray color. At its most basic, the alloy, used in the form of a disk for the watch dial, is submerged in a warm chemical bath, composed of copper acetate (greyish green) named rokushō, until the desired color is achieved. 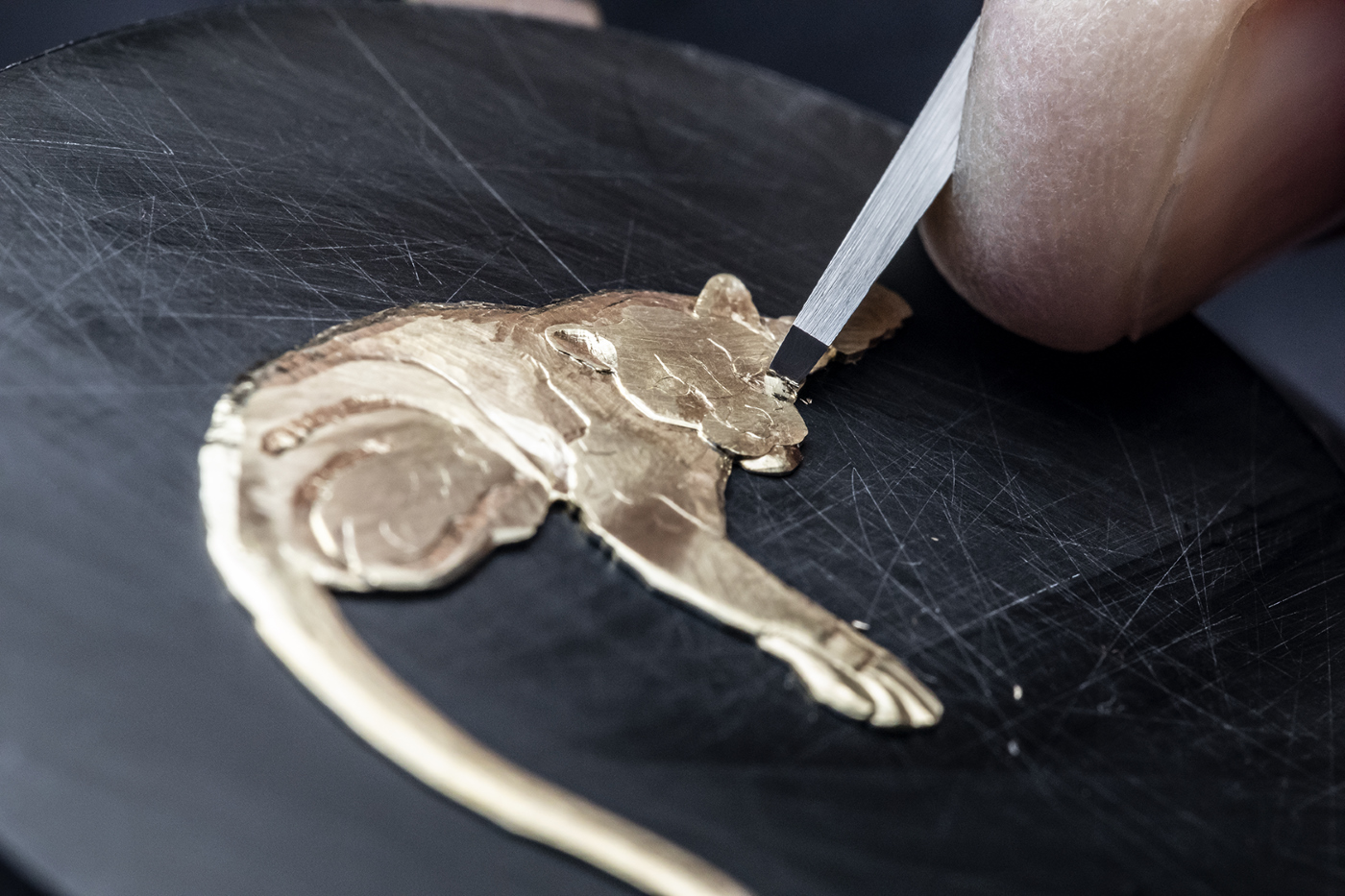 This ancestral know-how lies on a trial and error process even in its most basic form. The disk is plucked repeatedly from the bath, rinsed and color examined, before re-emersion. When the artist reaches a perfect hue, the shakudō itself is finished. Although the chemical bath process lies at the center of this art, Blancpain associates it with additional artistic techniques such as engraving, damascening, and carving. Not only that, but the shakudō process is often repeated at various stages of the work to bring extra hues and depth to the designs brought onto the disk of the dial. Each Blancpain shakudō dial is unique, and this uniqueness runs deeper than artistic variation in carrying out coloring and engraving.

Each particular design represents a special and one-unit piece, since no two designs will be the same. The dial featuring the Formosa clouded leopard is a perfect example. The work on creating such a timepiece begins with a paper sketch of the pose and the background decorations. The image of the leopard, along with other foreground elements, takes the form of a gold applique hand-engraved thanks to extremely precise tools. These appliques are also dipped in different salt baths to obtain the desired color effects, like the spots that adorn the feline’s fur. They are applied to the surface of the dial and held in place by very fine pins, which are inserted into holes preliminary drilled into the dial. The back of the pins are thereafter carefully hammered to ensure that they will remain securely nestled in place. 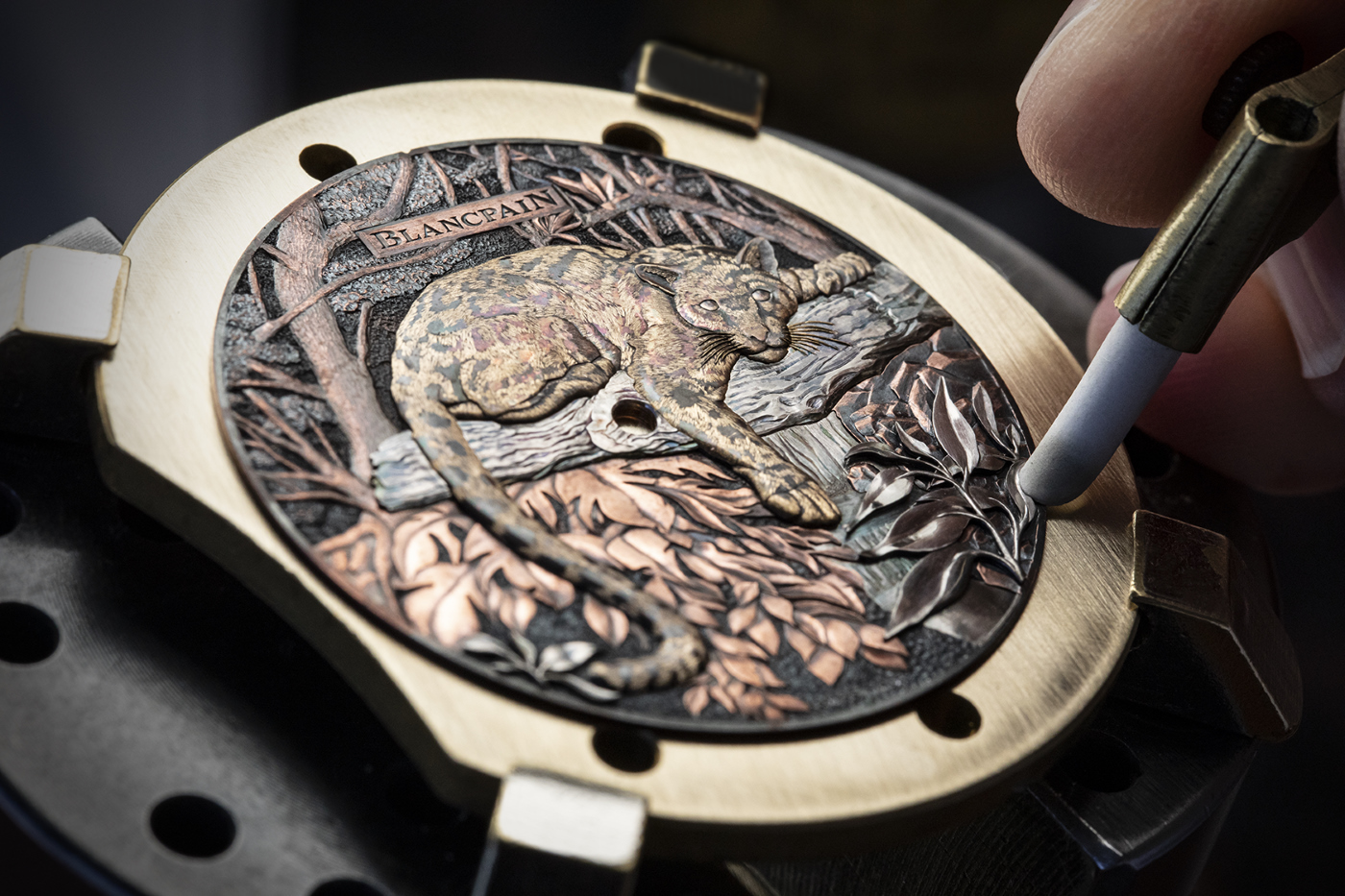 Historically, many shakudō objects were decorated with damascening. This ancient art form consists of carving designs into a surface in the form of a trough, and thereafter hammering soft gold into the trough. As tradition dictates, no glue is used. The hammering process suffices to fix the gold filaments in place, which are then polished smooth. Blancpain’s creations combining shakudō, engraving and damascening highlight the Manufacture’s uniqueness in the watchmaking world. Blancpain is in fact the sole Maison to propose this marriage of artistic crafts. 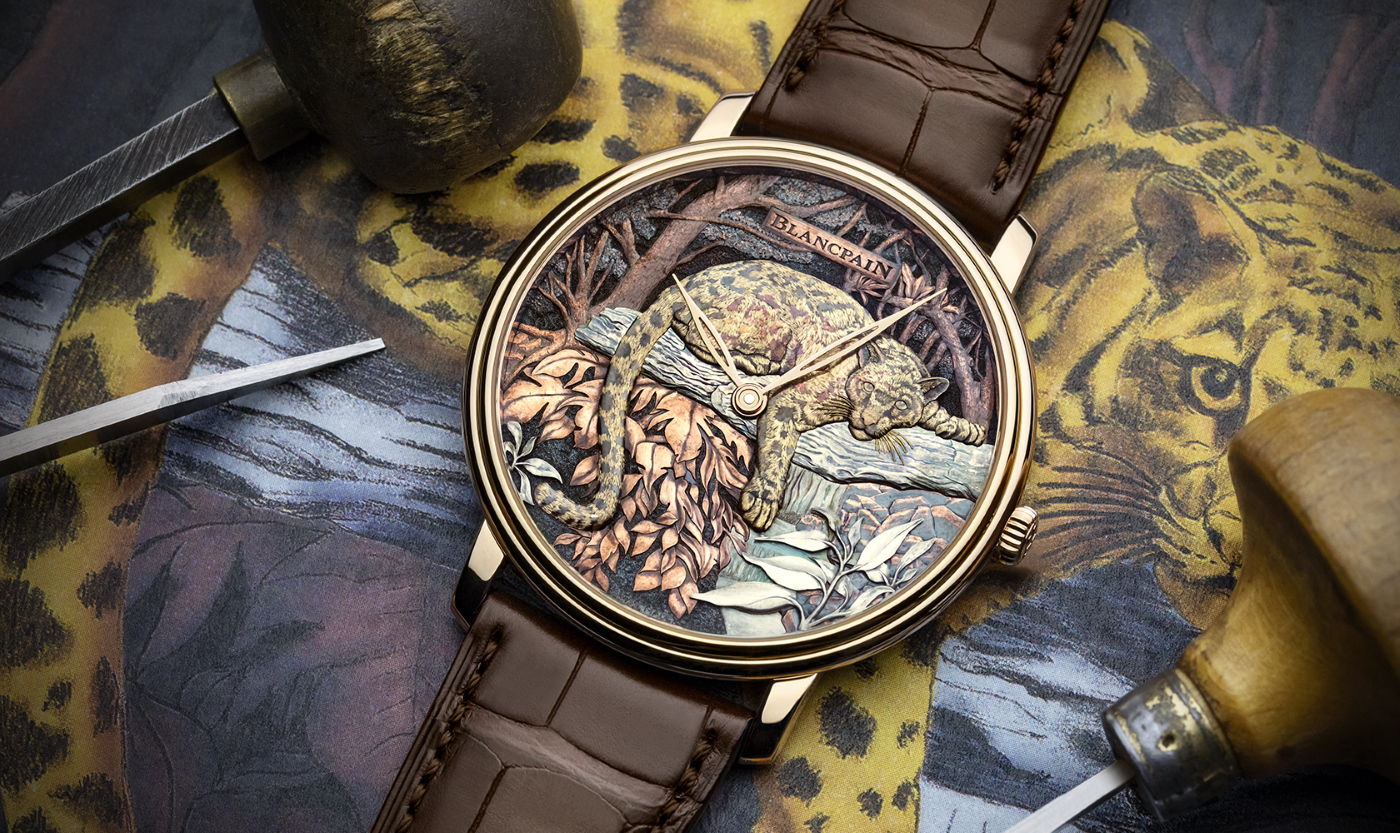