A partner of the Louvre Museum since 2019, Vacheron Constantin is auctioning a Les Cabinotiers watch at the “Bid For the Louvre” sale organised online from December 1st to 15th by the Louvre Museum and Christie’s, with the support of Drouot. More than a watch, this model represents a unique opportunity for its buyer to enjoy an unforgettable experience poised at the intersection of art and craftsmanship, between Paris and Geneva.

A partner of the Louvre Museum since 2019, Vacheron Constantin is auctioning a Les Cabinotiers watch at the “Bid For the Louvre” sale organised online from December 1st to 15th by the Louvre Museum and Christie’s, with the support of Drouot. More than a watch, this model represents a unique opportunity for its buyer to enjoy an unforgettable experience poised at the intersection of art and craftsmanship, between Paris and Geneva.
V

acheron Constantin is pleased to be supporting the Louvre Museum in the “Bid for the Louvre” auction from December 1st to 15th 2020 exclusively on the Christie’s website, from which the entire proceeds will be donated to the museum’s solidarity projects. Vacheron Constantin’s Les Cabinotiers watch is the only horological lot among the unique and exclusive pieces put up for auction. This participation was a natural choice for the Manufacture, testifying to its profound attachment to art and culture as well as its concern for safeguarding and passing on heritage in all its forms.

“We are proud to be taking part, along other artists and Maisons, in this exceptional auction organized by the Louvre and Christie’s in support of the Museum’s solidarity projects. Our ongoing commitment to art and the transmission of savoir-faire – which has been expressed alongside the Louvre since the announcement of our partnership a year ago – takes on even greater significance within a global context that is troubled and challenging in more ways than one. Putting up for auction a Les Cabinotiers timepiece based on a masterpiece, a one-of- model personalized in accordance with the acquirer’s wishes, symbolizes the identity of our Maison and its mission to promote the sharing of culture and emotions”, says Louis Ferla, Vacheron Constantin CEO. 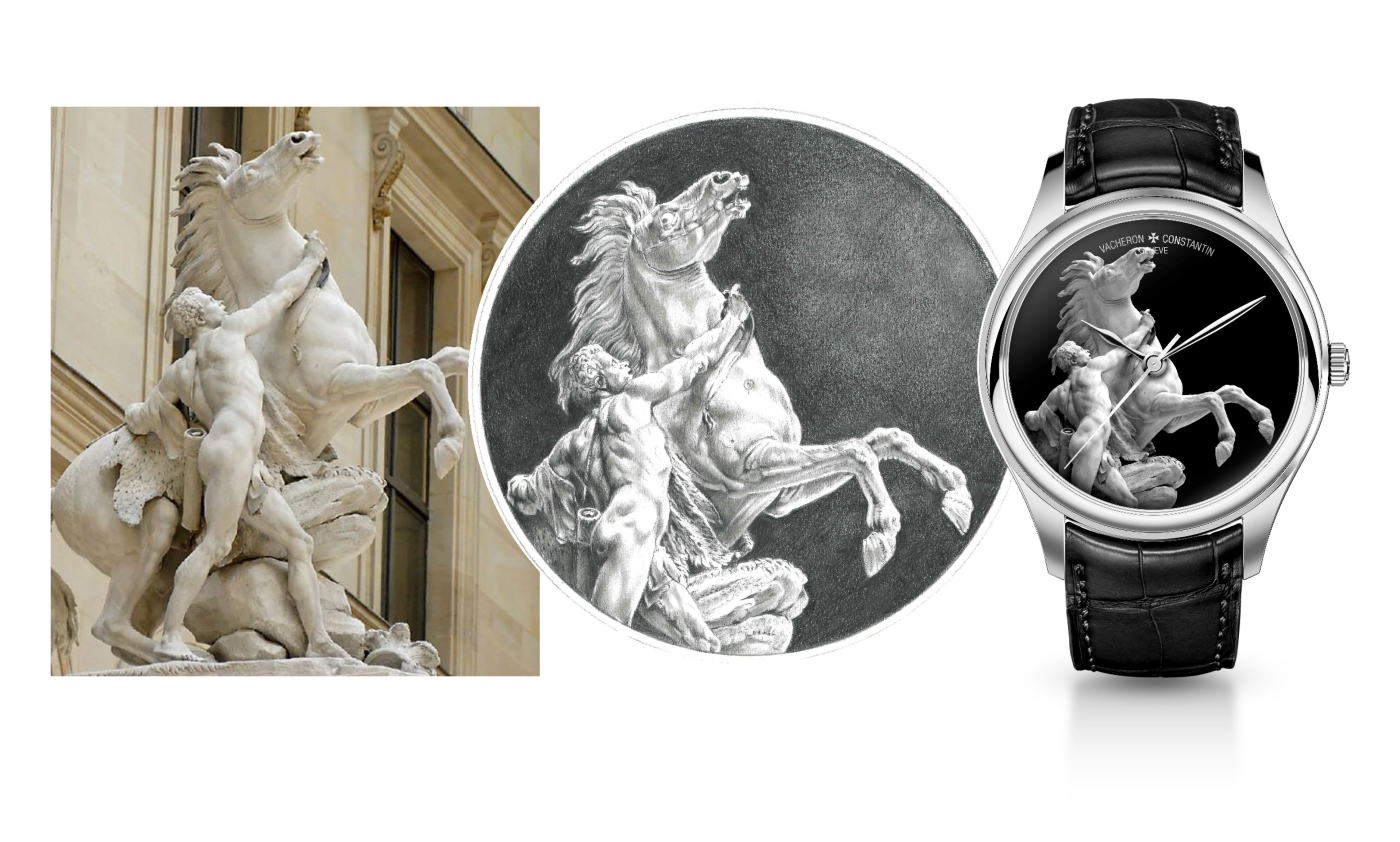 Example of a creation that can be done in grisaille enamel, inspired by Guillaume Coustou’s sculpture of the Horse Restrained by a Groom, called Horse of Marly.

The acquirer of this exceptional piece will have the opportunity to personalise it through full participation in its creation, along with experts and master craftsmen of Vacheron Constantin and Le Louvre. In addition to the dial, which will reproduce an artwork from the Louvre Museum, they will be able to choose the case material – platinum or pink or white gold – to have an engraving made on the officer-type case-back; and to opt for a strap from among the many possibilities of materials and colors. This timepiece will be powered by in-house Calibre 2460 SC, crafted according to the demanding standards of Vacheron Constantin and Haute Horlogerie in terms of both reliability and finishing. 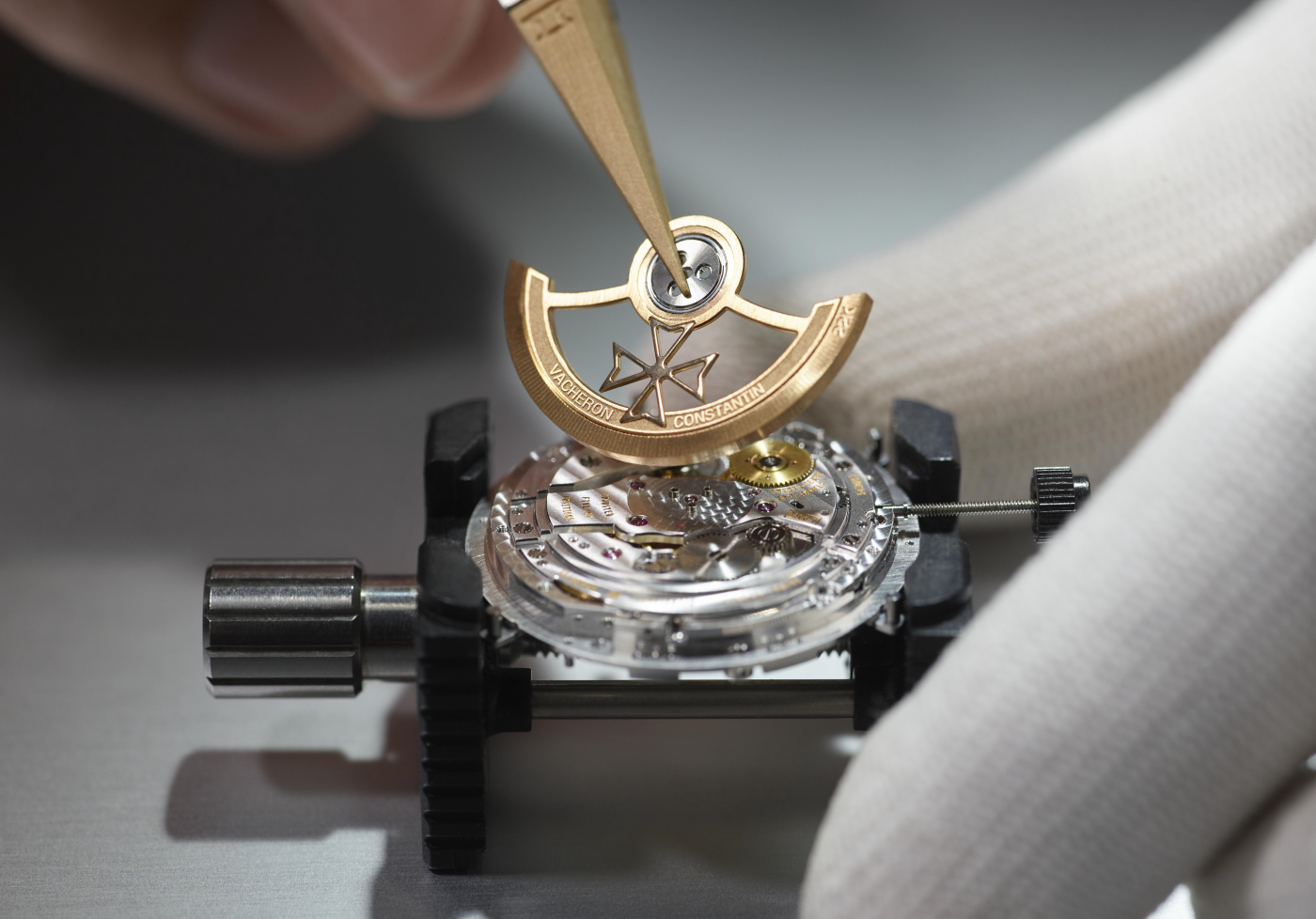 A work of art on the dial

The adventure for the successful bidder will begin in Paris, during a private visit to the Louvre led by its best expert, in order to select with him/her the masterpiece that will be reproduced in enamel on the dial, from among the paintings and sculptures conserved in the Museum. According to the choice made and the client’s preference, the Vacheron Constantin Master enameller will use the miniature enamel or grisaille enamel technique. 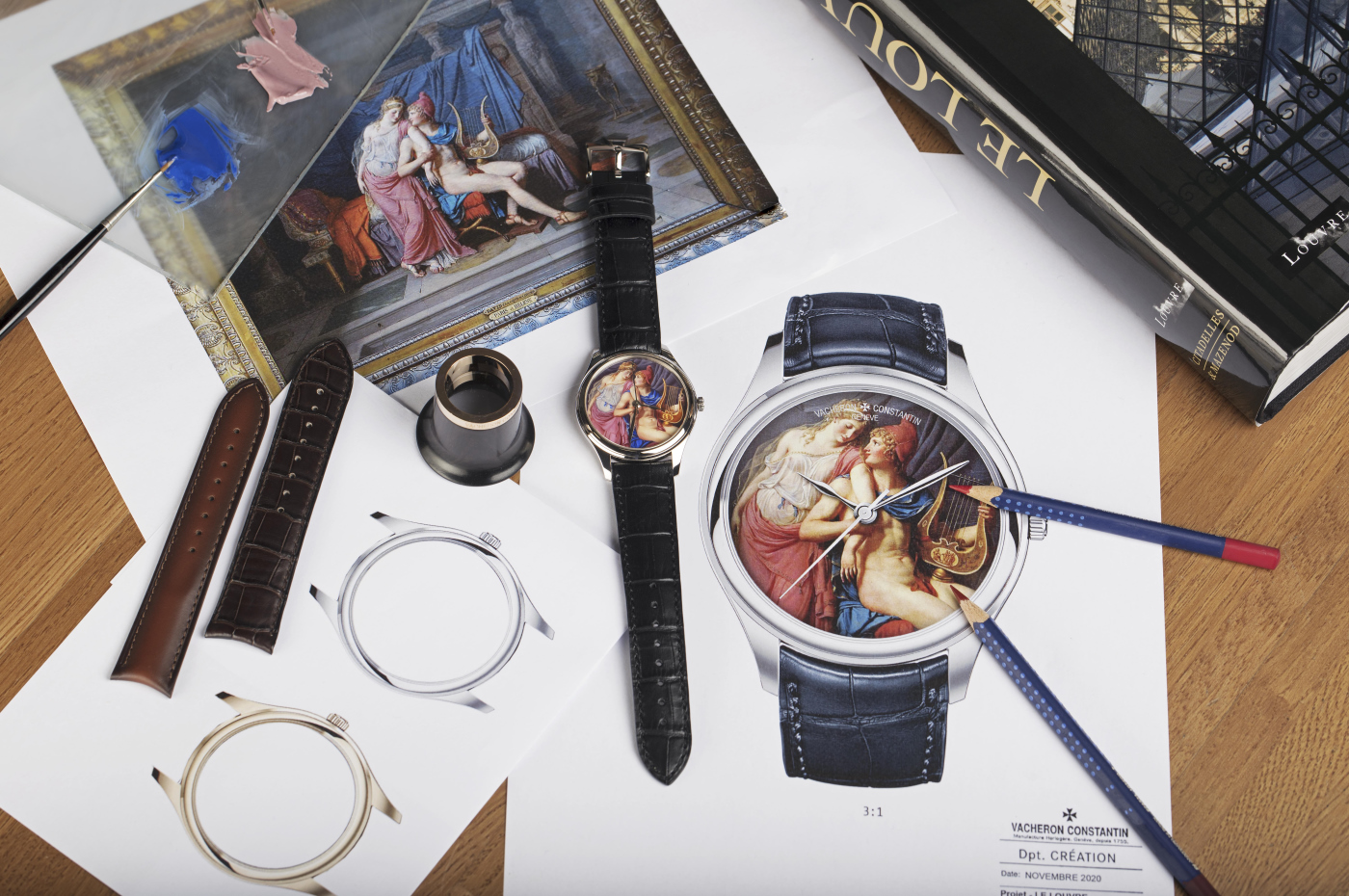 Example of a miniature enamel rendering of The Loves of Paris and Helen, by Jacques-Louis David, kept at the Louvre Museum

The delicate skill involved in miniature enamel – in its version known as the “Geneva technique” dating from the 18th century – is reserved for the most experienced artisans mastering both pigments and fire. One of the main challenges consists in composing a colour palette compliant with the original shades of the work, while remaining keenly aware that the multiple firings in the kiln at over 800°C are liable to alter its colour and brilliance.

Grisaille enamel is a craft that appeared in the 16th century and consists of superimposing touches of a rare white enamel – called Limoges white –on a layer of dark enamel coating the gold dial base. Each layer of enamel is then fired in a kiln, while scrupulously respecting pre-defined firing times to the nearest second. 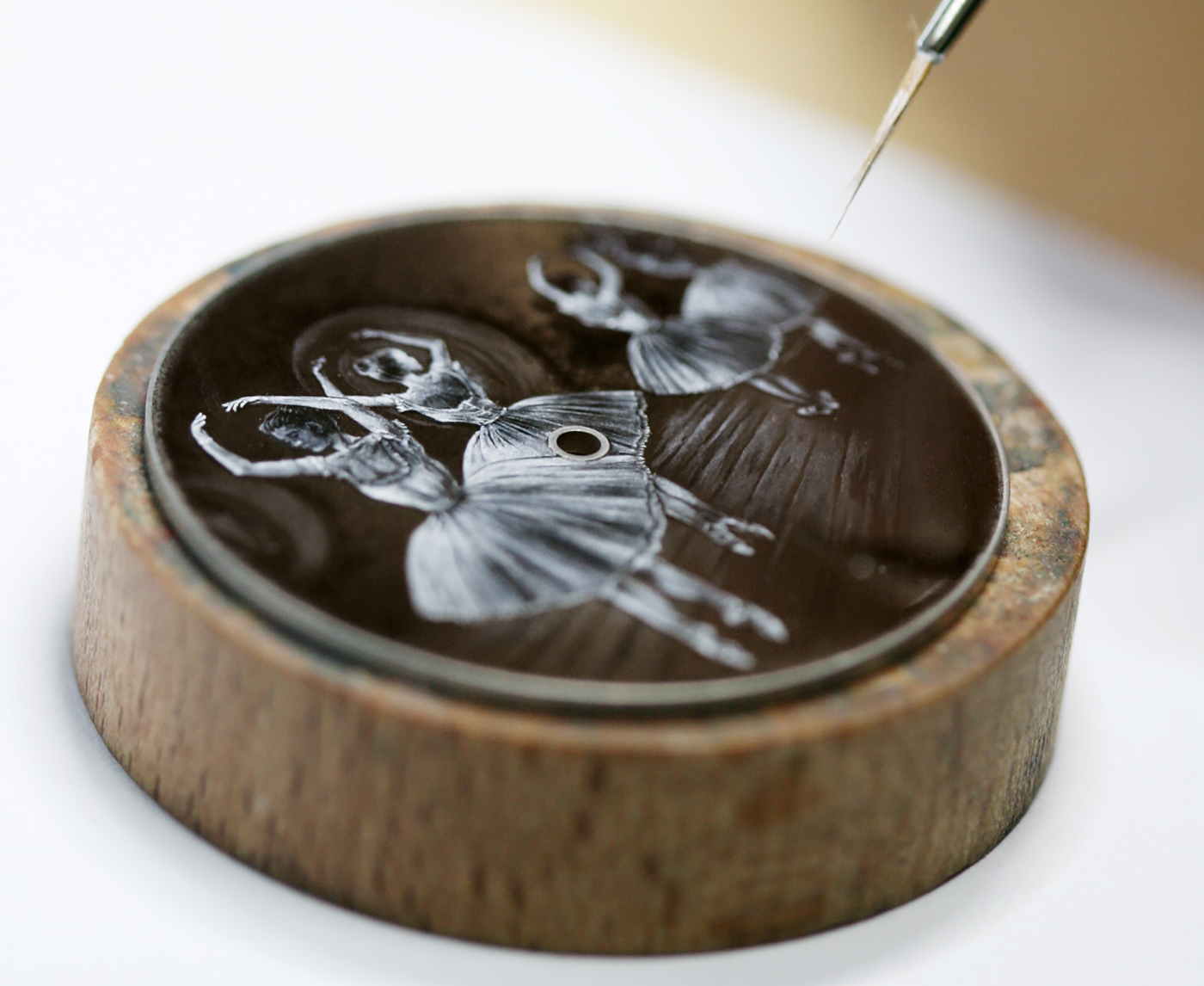 Closely involved throughout the creative process, the acquirer of this unique Les Cabinotiers watch will be able to choose from several personalisation options during a private visit to the Manufacture Vacheron Constantin in Geneva, where he/she will meet the creative talents of the design studio, the master watchmakers, as well as enamellers and engravers working on his/her watch.

A platinum, pink gold or white gold case, engraving on the case and officer case-back, a choice of strap – material, colour, stitching and marking – are just some of the many possibilities available to personalise this exceptional timepiece powered by the Manufacture 2460 SC self-winding calibre.

The transparent case-back will reveal a 22-carat gold oscillating weight openworked in the shape of a Maltese cross, the symbol of Vacheron Constantin, as well as hand finishing, bevelling, circular-graining and polishing – all performed with the greatest respect for watchmaking expertise. 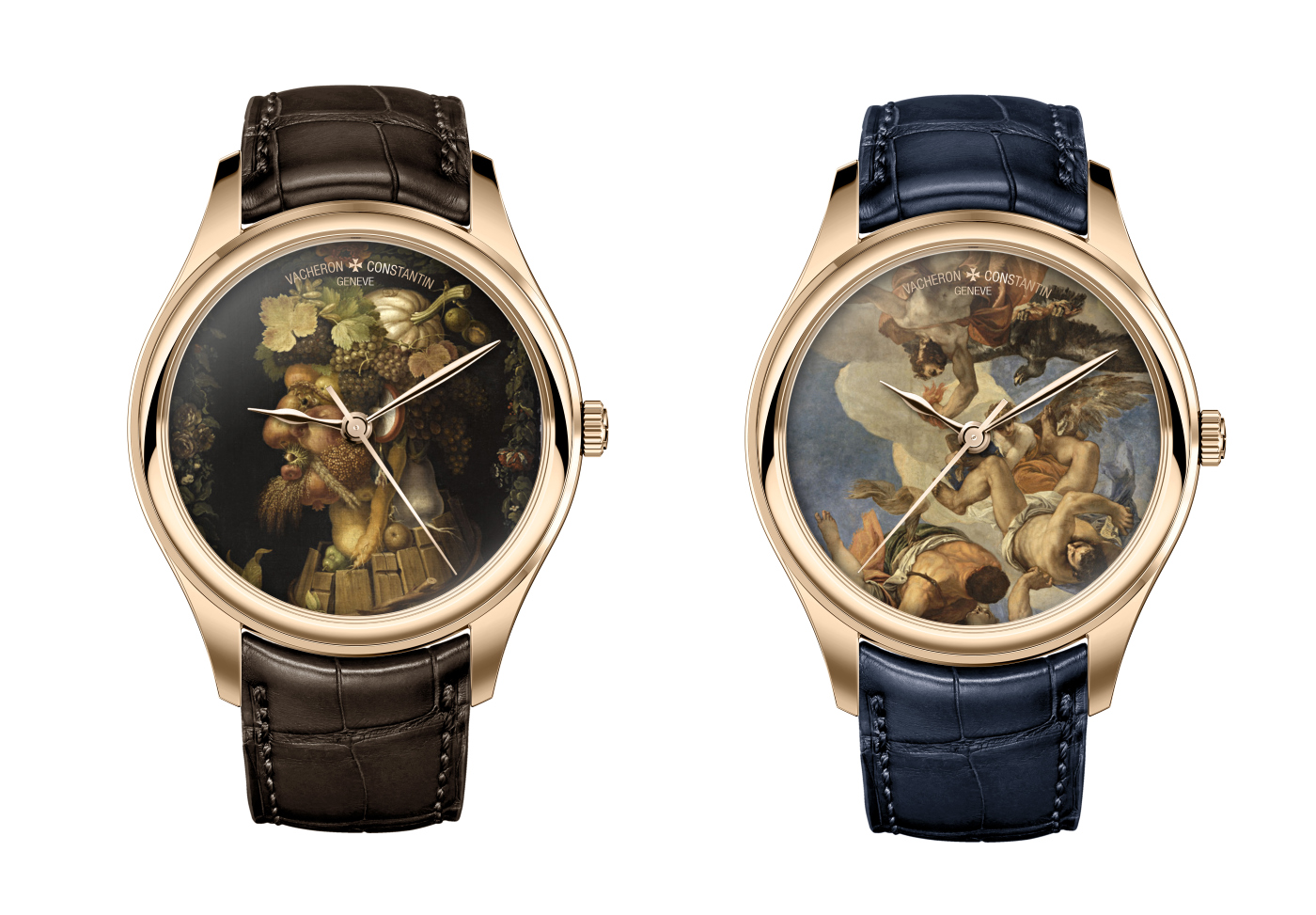 At the close of this exclusive experience, the purchaser will receive their watch, accompanied by two certificates of authenticity: one from Vacheron Constantin; and another from Le Louvre Museum certifying the reproduction of the artwork.