There are some traditions that Jaquet Droz always observes; one of them being a tribute to the Chinese zodiac. The connection to China has been a part of the brand’s DNA for centuries. 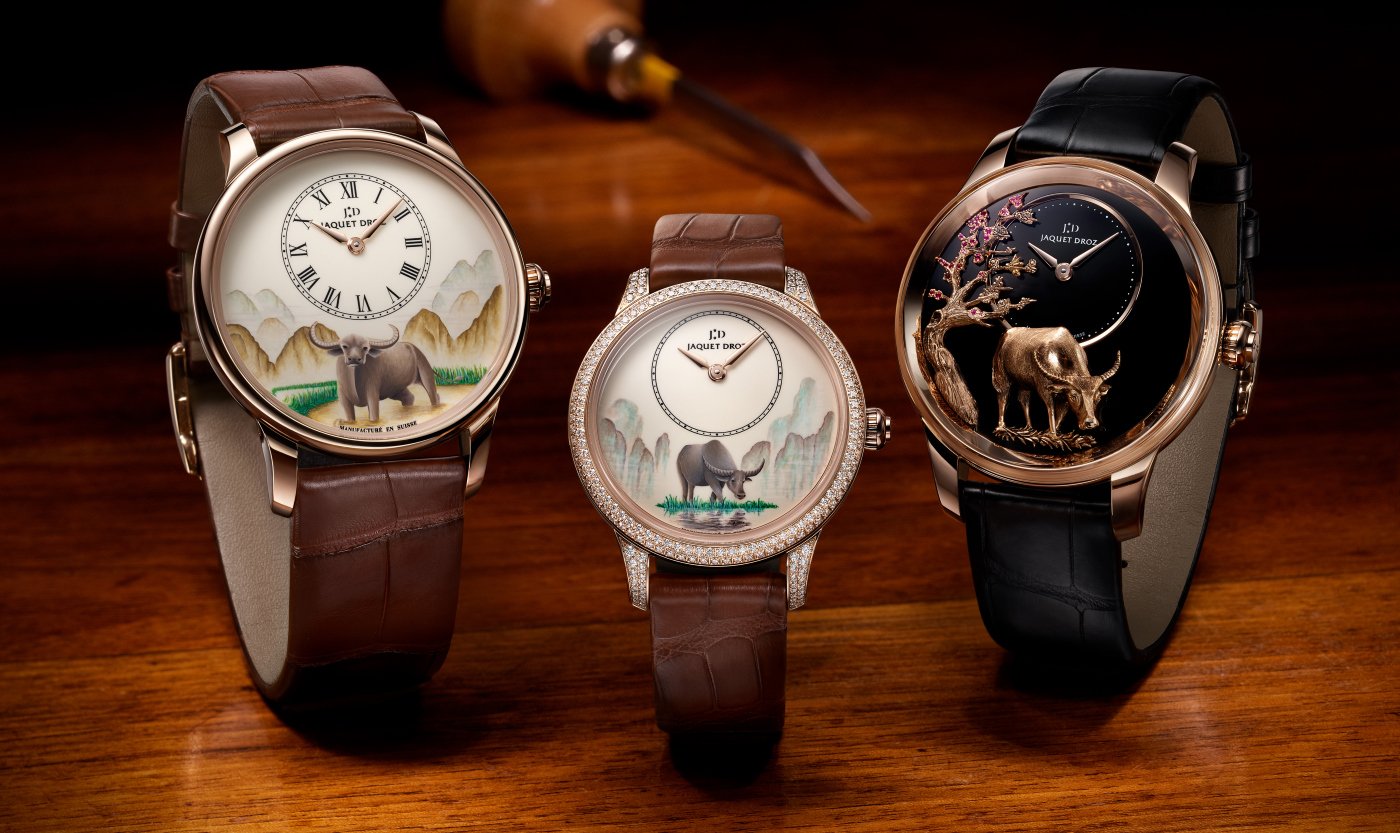 There are some traditions that Jaquet Droz always observes; one of them being a tribute to the Chinese zodiac. The connection to China has been a part of the brand’s DNA for centuries.
T

he Jaquet-Droz family began fostering relations with the imperial court as early as 1774. Over a decade, the Jaquet-Droz family exported over 600 pieces to China, much to the fascination of the Qianlong Emperor and the imperial court mandarins, who could not get enough of their mechanical automaton watches. This qualified Jaquet Droz as the first watchmaking brand imported into the Forbidden City. Numerous Jaquet Droz automatons and pocket watches are still preserved to this day in the imperial Palace Museum. 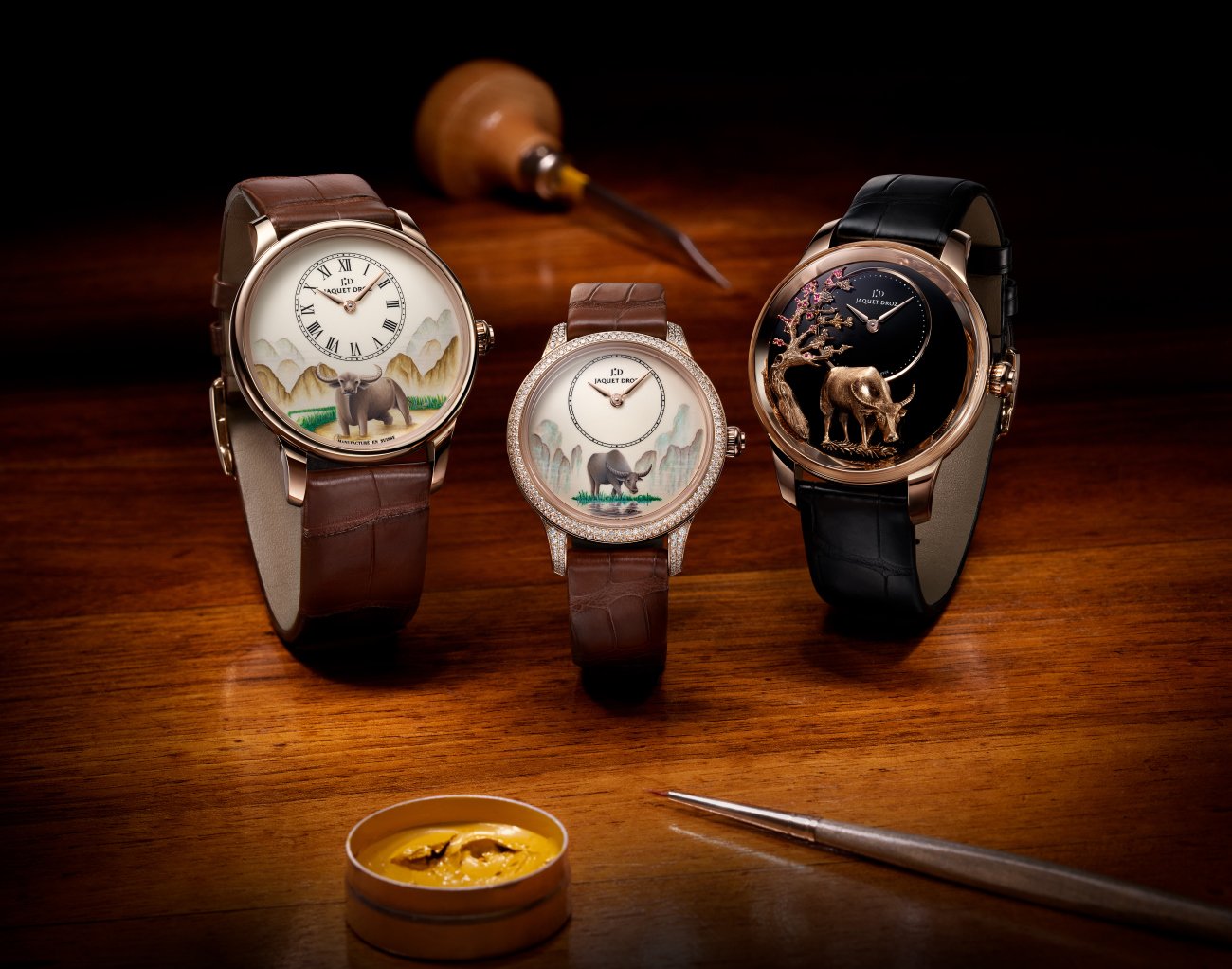 Nearly 250 years later, the Maison is still headquartered in La Chaux-de-Fonds and is honored to be carrying on this longtime Sino-Swiss friendship with a tribute to the zodiac sign for the 2021 Chinese New Year: the ox.

Legend has it that the Jade Emperor chose the animals in the 12-year zodiac cycle based on a race. The ox is portrayed carrying a rat on its back, which is ultimately how the rat won the race. 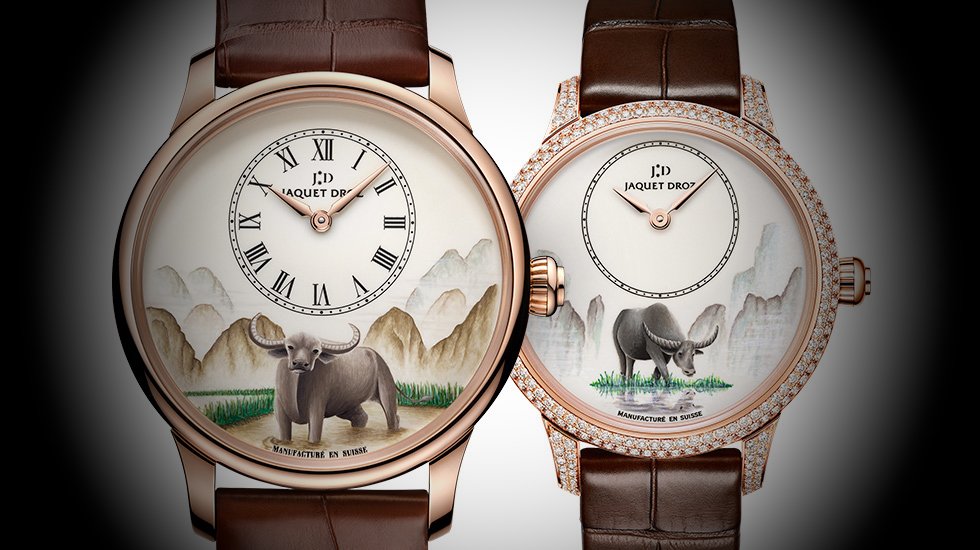 Since then, the ox has represented attributes like perseverance and reliability — the same values that unite China and Jaquet Droz. The ox has a reputation for staying the course in the face of adversity, powering through and remaining rational. With strong calm and persistence, children born under the sign of the ox are known for their honest and hard work. For women, the ox symbolizes perseverance and the importance of education and keeping the family together.

Each animal of the zodiac is traditionally connected with an element. This year it is metal. Combined with the ox, metal serves to heighten its qualities as well as its ability to do everything in its power to attain goals and achieve dreams. 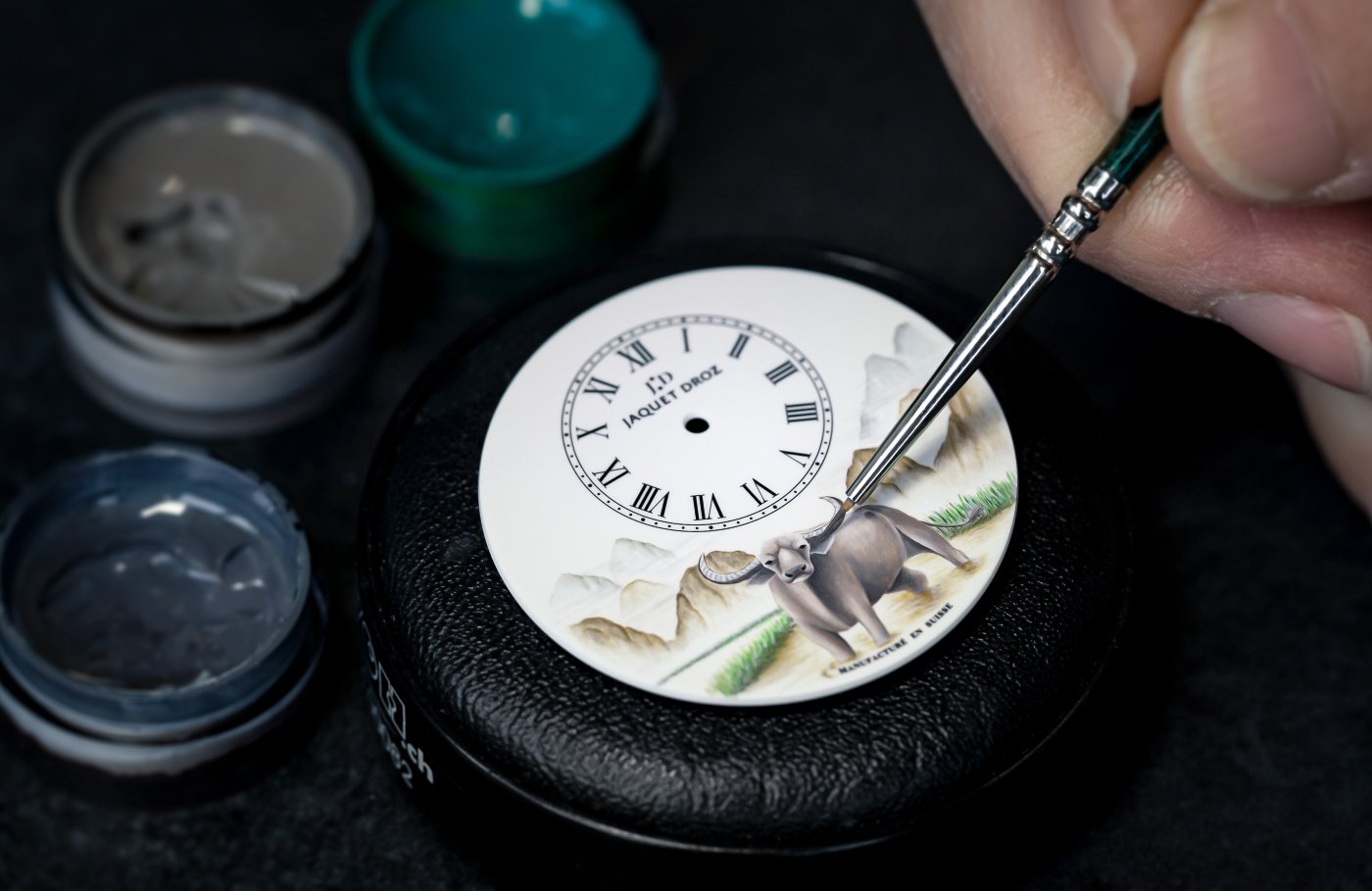 Jaquet Droz believes gold is the only metal worthy of the ox. There are three pieces in red gold and one in white gold. The Maison selected two distinctive artisanal techniques to represent the new zodiac sign. First, miniature painting, which appears on two 35 mm x 41 mm timepieces with a majestically peaceful ox against a background of mist-covered mountains. A handpainted and softly serene pastoral scene. This pair of Petite Heure Minute watches provide an ample canvas for micro-painting, both in a 35 mm ladies’ version with a gem-set bezel and lugs, and a 41 mm version without gems. As for the case-back, the first one’s oscillating weight is personalized with a red gold appliqué. The second one has an 18-karat open-worked rotor that is hand-engraved. 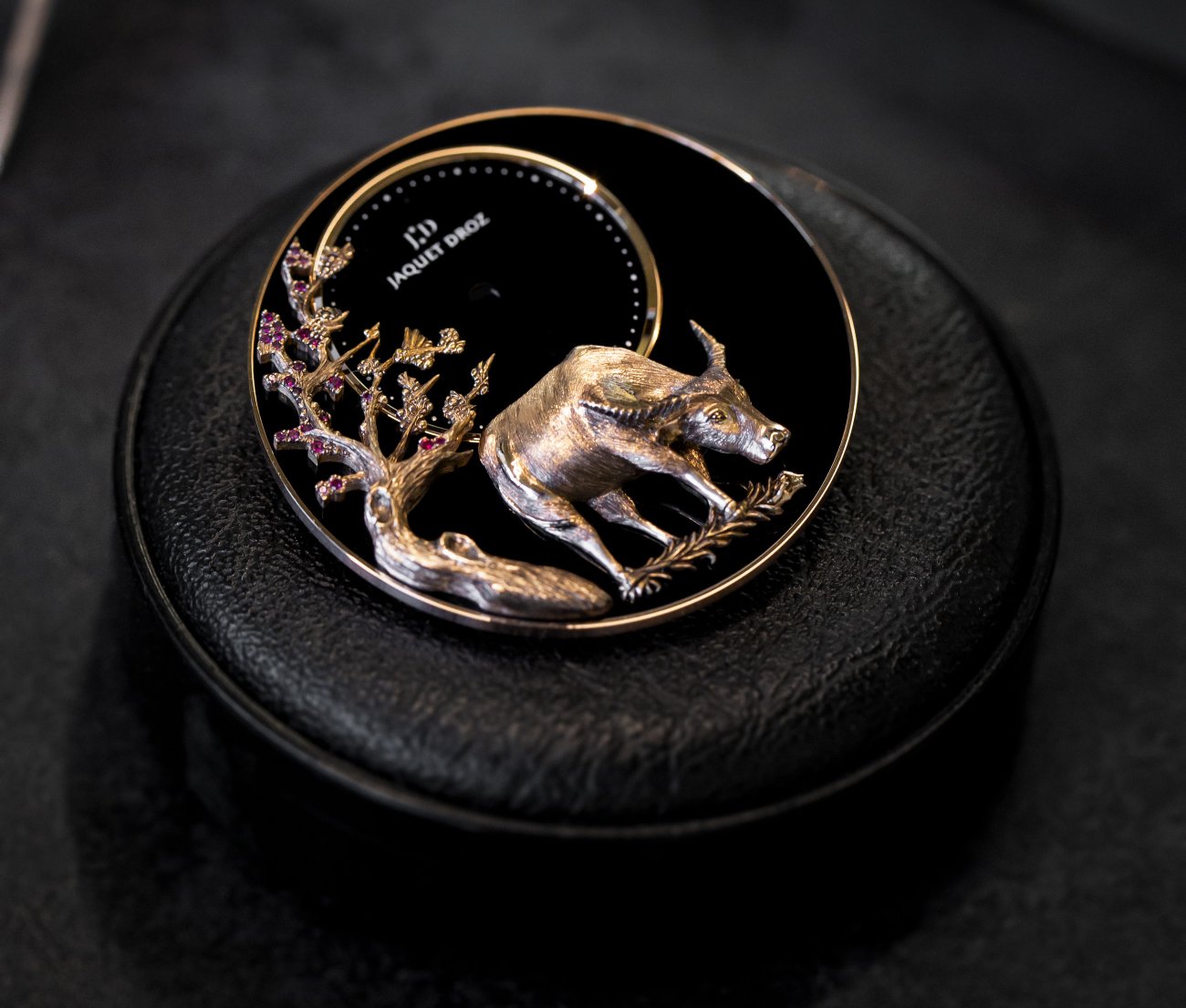 The other two feature relief engraving, an artisanal technique cherished by Jaquet Droz. This method is used to create an ox that literally seems to be coming out of the dial as it calmly saunters on to the pitch-black onyx face towards a gold plum tree with red ruby blossoms. The plum tree symbolizes the harmony between humans and nature, the earth and the sky. Rubies stand for bravery and victory, values close to the ox’s heart. The stunning raised tableau is made possible by hand-engraved gold appliqué on these two 41 mm Petite Heure Minutes hour rings. One is crafted in red gold and the other in white gold with a gem-set bezel and lugs. Like on the dials, the Ateliers d’Art also engraved the oscillating weights with the head of an ox on an onyx background. 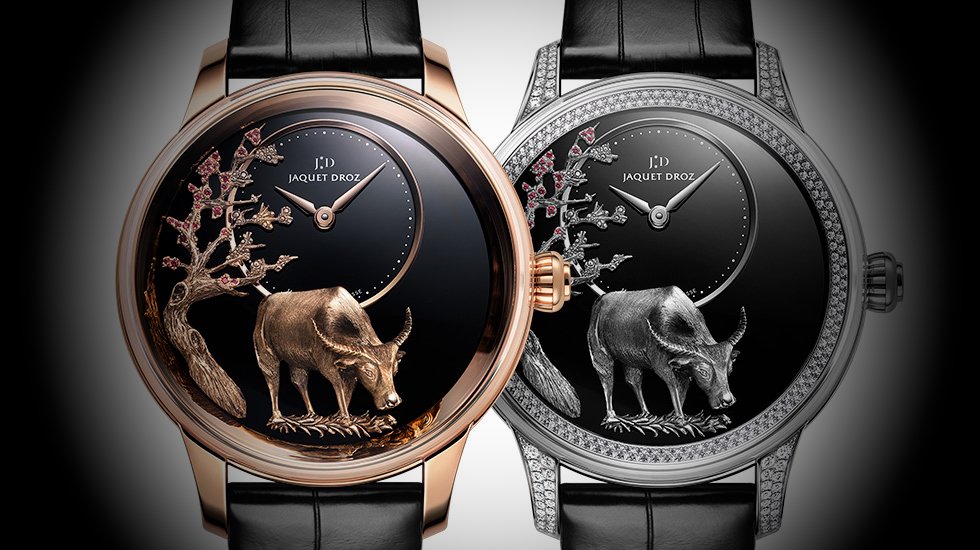 Each of these four handcrafted compositions are exclusively being released in a series of eight. A continuation of the age-old Sino-Swiss friendship and the Art of Astonishment that has lasted over 250 years.