The German manufacturer is celebrating its 160th anniversary in 2021. A look back over its history (with the help of the Europa Star archives) but also into its future with the introduction of the brand’s latest models to mark this milestone - including a re-edition of the iconic Max Bill’s kitchen clock!

The German manufacturer is celebrating its 160th anniversary in 2021. A look back over its history (with the help of the Europa Star archives) but also into its future with the introduction of the brand’s latest models to mark this milestone - including a re-edition of the iconic Max Bill’s kitchen clock!
O

n the 14th of April, Junghans celebrated its foundation back in 1861 for the 160th time. The brand marked its anniversary with a look back over an eventful history of the long-established company from the Black Forest, while at the same time directing their focus on current times and the future. This also involves the innovations launched by Junghans in the anniversary year.

Established in Schramberg 160 years ago by Erhard Junghans and his brother-in-law Jakob Zeller-Tobler, Junghans grew into one of the world’s largest clock manufacturers extremely quickly (1903). Onwards of the 1950s, the heyday of the mechanical watch, Junghans developed and produced a multitude of mechanical watch movements. 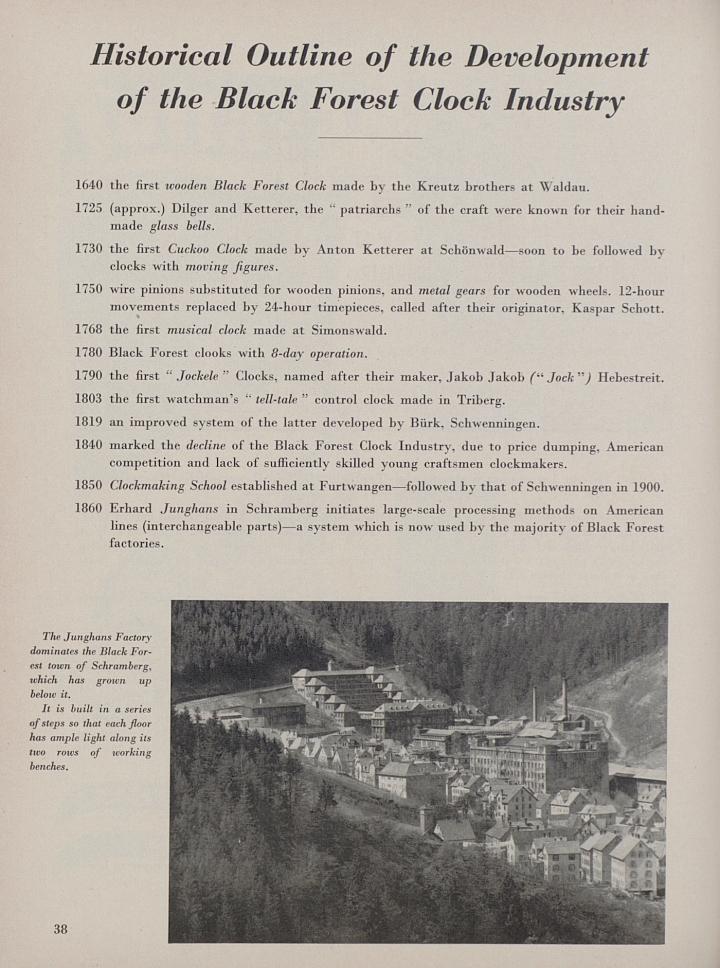 The iconic building of Junghans that dominates the town of Schramberg with its structure in a series of steps is pictured in this history of the development of the clock industry in the Black Forest published in a 1953 edition of Europa Star.
©Europa Star Archives

The most sophisticated calibres developed in Schramberg during this period were always reserved for the Meister collection. A new Meister Signatur Handaufzug Edition 160 pays homage to this era – and quite literally carries the signature of the master. The distinctive design characteristics of the 18-carat gold timepiece adhere to the traditional archetype, albeit with a modern interpretation. 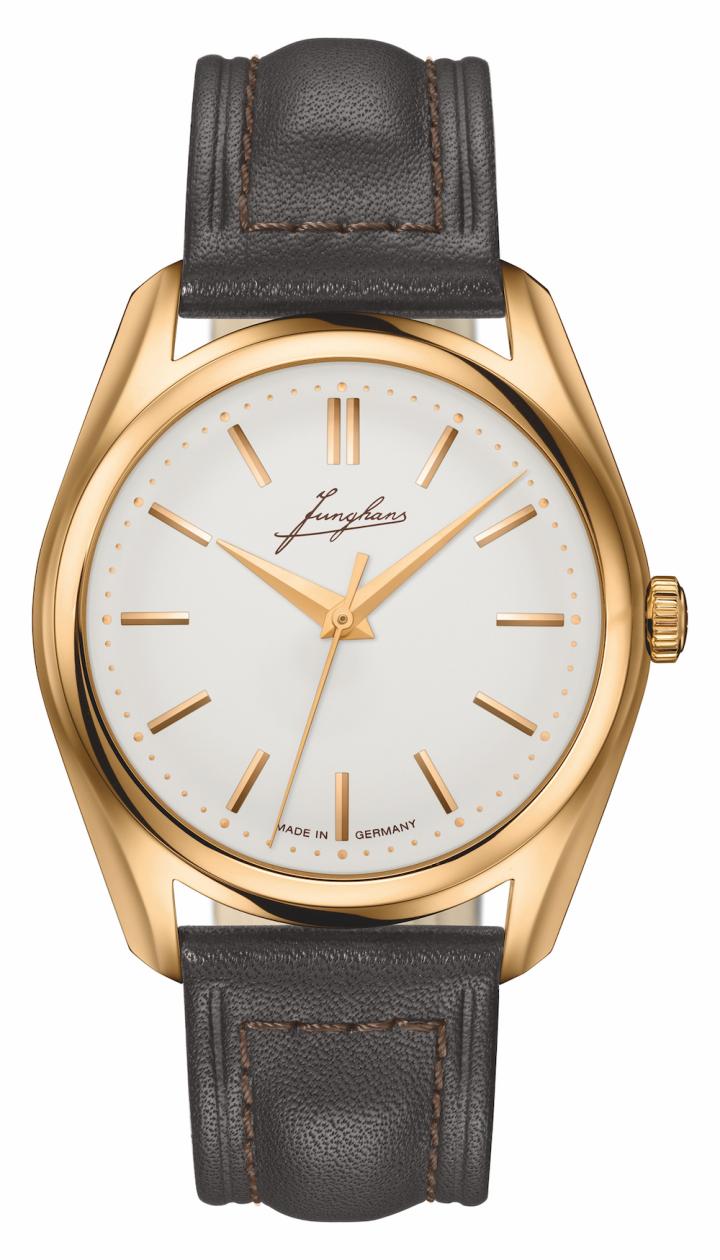 An authentic reprisal of the Meister legend can be evidenced in the inner workings of the watch: the Meister Signatur is powered by the classic hand-winding movement J620 – strictly limited to 160 units. Developed and produced decades ago in Schramberg, these movements are now finished with loving attention to detail. A glass case back provides a glimpse into this vibrant chapter of fascinating watch making history. 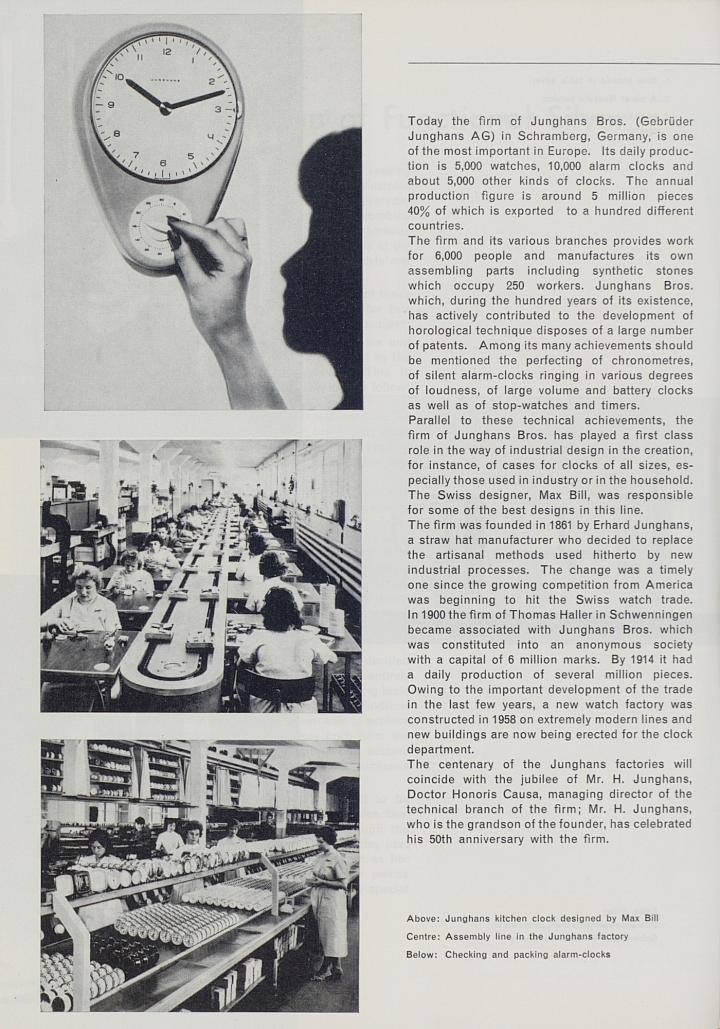 In the 1960s, Junghans was one of the most important European watch and clock manufacturers with a production of 5 million pieces a year and a workforce of 6,000 people, as this article from 1961 reports. Top left: the Junghans kitchen clock designed by Max Bill.
©Europa Star Archives 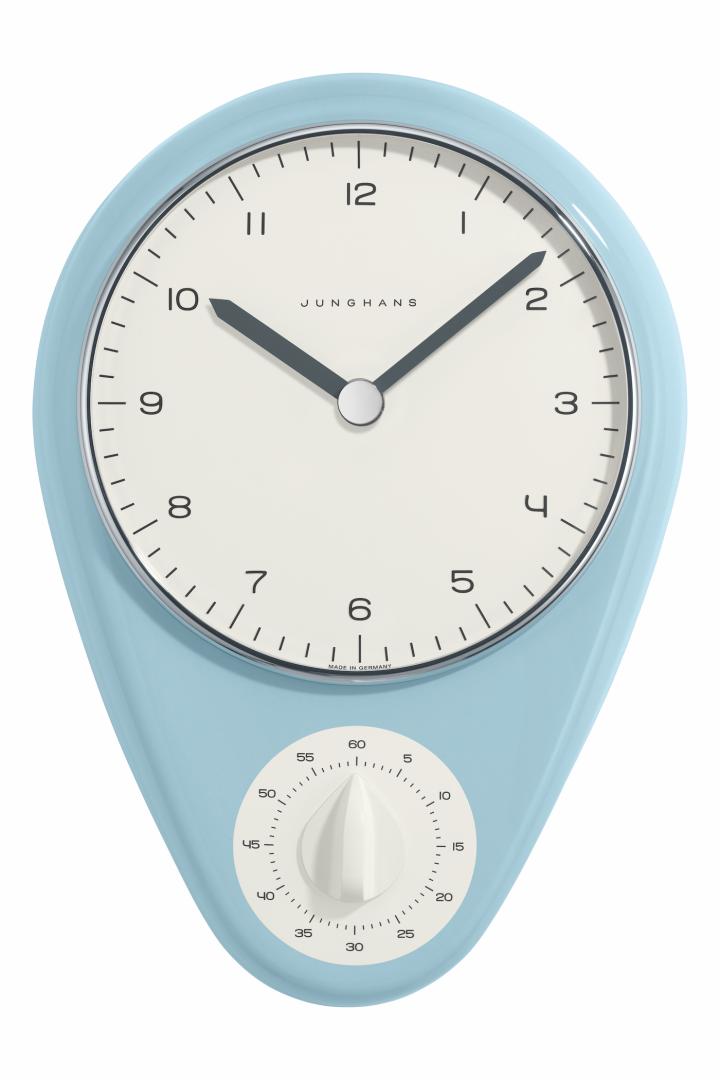 “Live your style” – with this motto, Junghans dedicated themselves to a combination of design and utility value. With the puristic max bill models and the most recent FORM line, Junghans are following the principles of modern, German industrial design. It was with these standards that the Black Forest gained global recognition as a cradle of German inventiveness in the twentieth century. 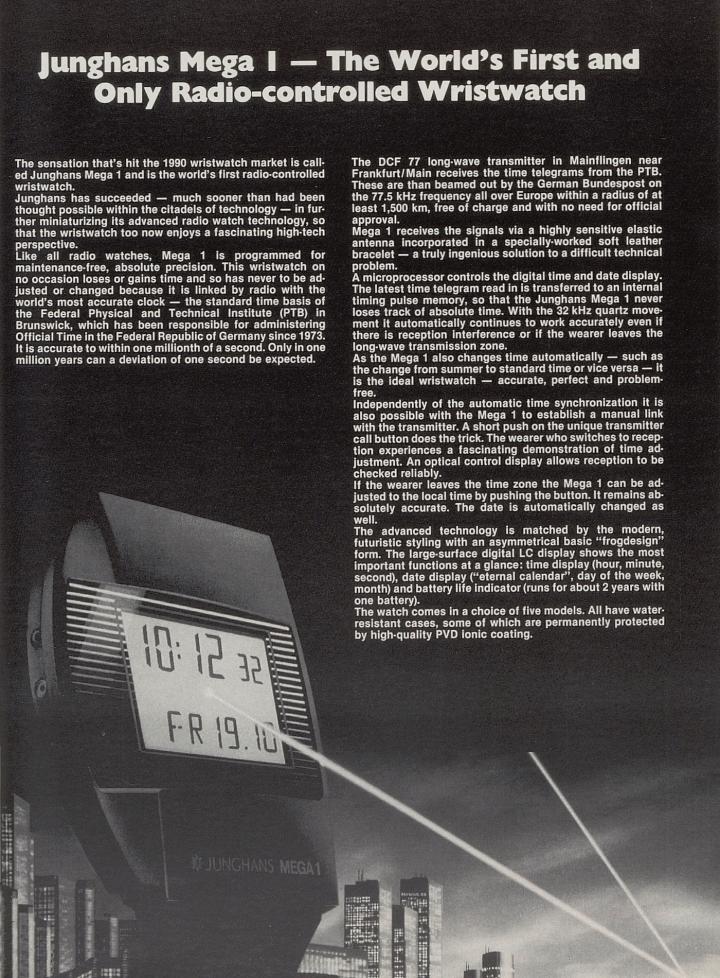 Mega 1, the first radio-controlled wristwatch, made the headlines in Europa Star when it was introduced by Junghans in 1990.
©Europa Star Archives 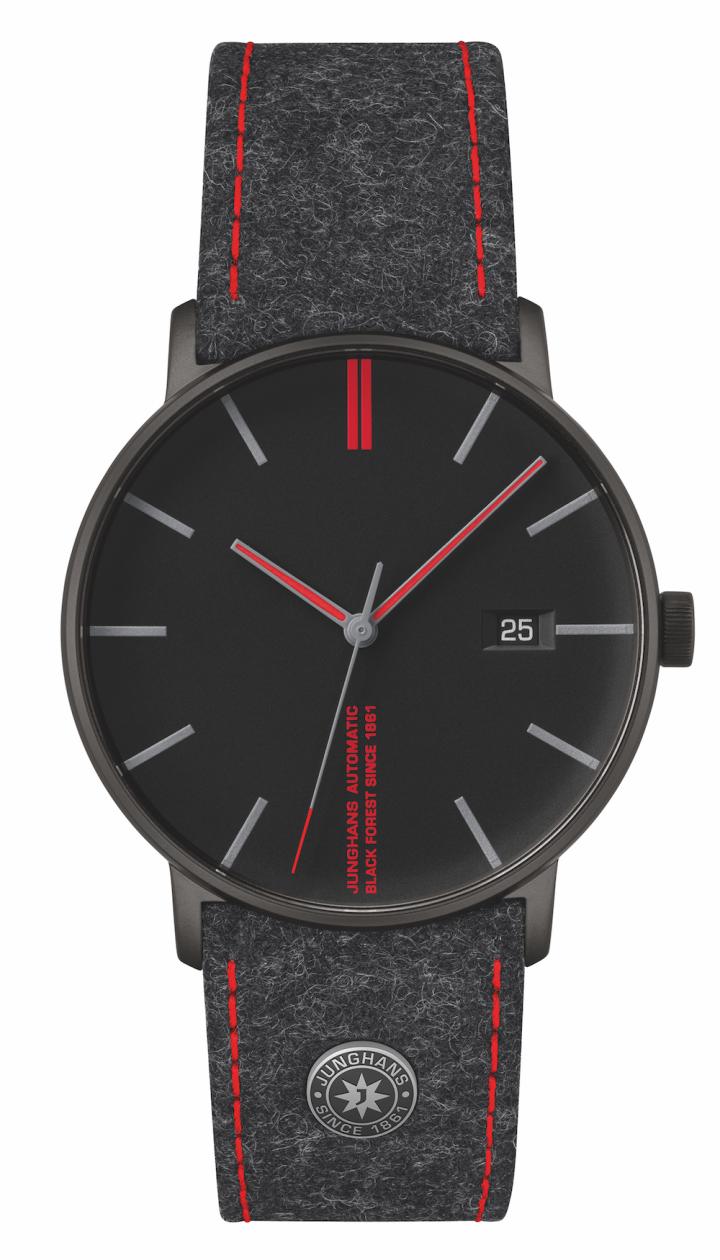 The close attachment to their home region is underpinned by the long-standing business with release of their FORM A Edition 160, limited to only 600 units – however, with a modern interpretation. With references to the Black Forest incorporated into the design on the one hand, and a clear, straightforward design on the other, the watch is symbolic of Junghans’ approach to celebrating this year’s anniversary: an affiliation to the 160-year company history, whilst at the same time focusing on the present and the future. 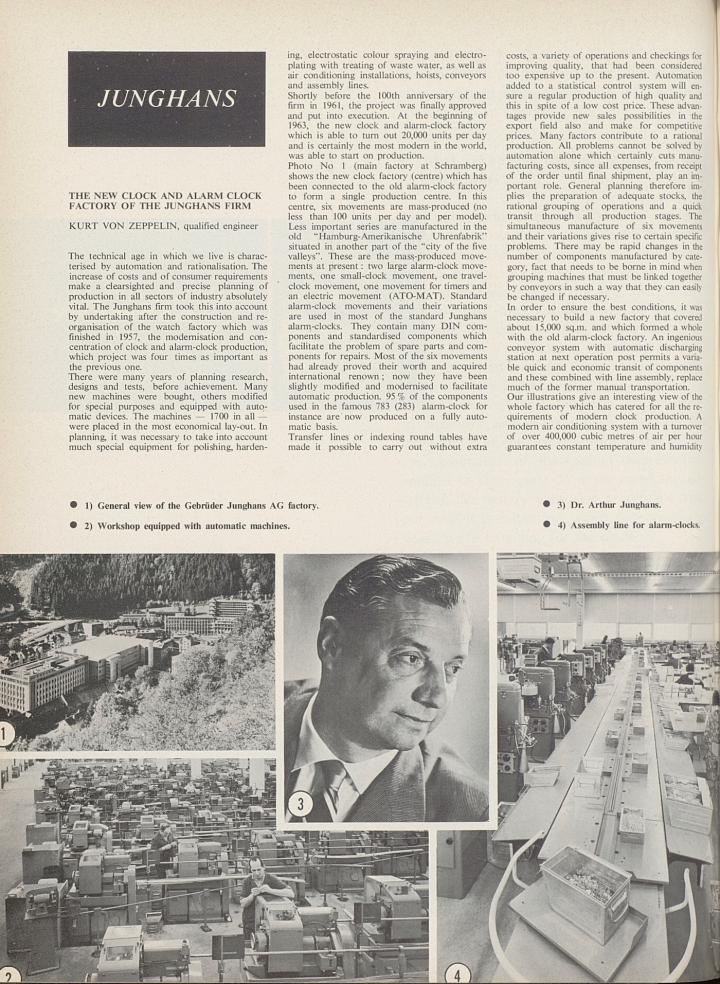 A new and modernized facility was introduced in Schramberg in 1957 with no less than 1,700 (!) machines, shortly before the 100th anniversary of Junghans. The opportunity for Europa Star to pay a visit to this technical feat.
©Europa Star Archives 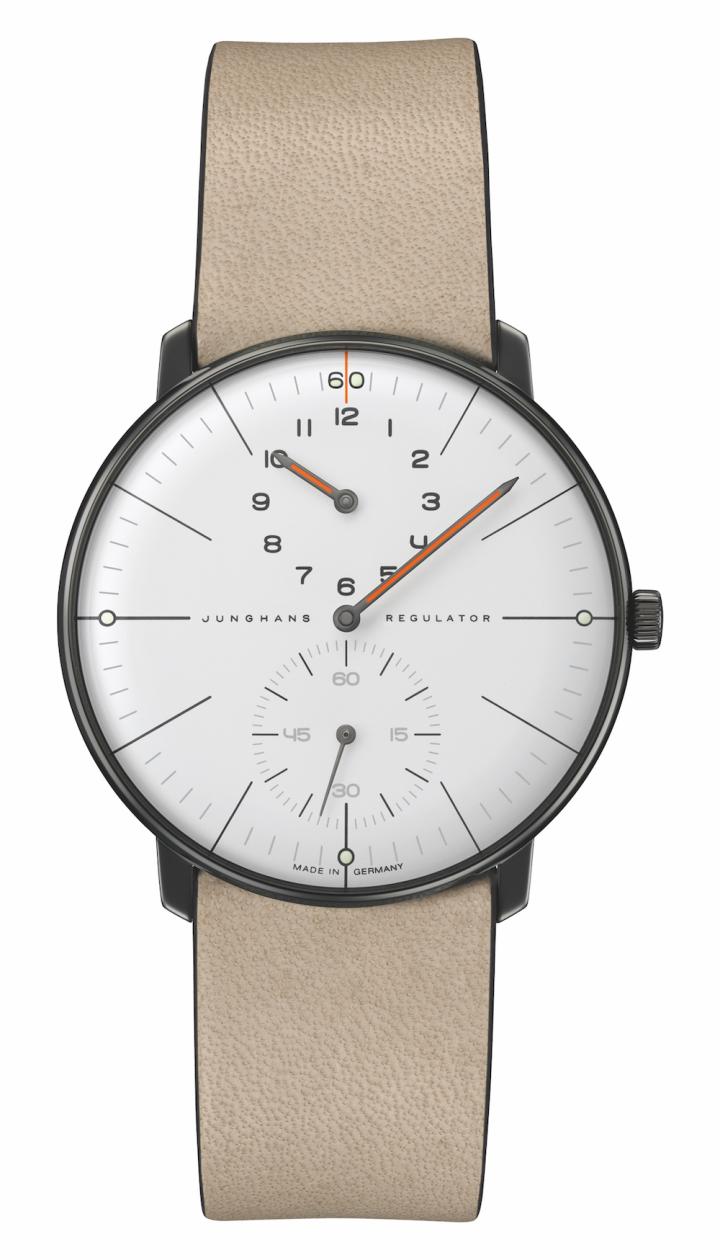 This new max bill Regulator is part of a special max bill Edition Set 60, along with the max bill Automatic and the max bill MEGA Kleine Sekunde. The set is limited to 1,060 pieces.

Constant reinvention is at the heart of innovation and change. Rethinking the tried and tested in conceptions and designs – however, without losing the essence and that unique identity. The result of this balancing act is the new Meister fein Automatic. Its state-of-the-art, discus-type geometry carries the legend of the Meister into the present day, and further on into the future. Spherical sapphire crystal fits seamlessly into the convex form of the case on the timepiece, depicting a completely new type of silhouette. 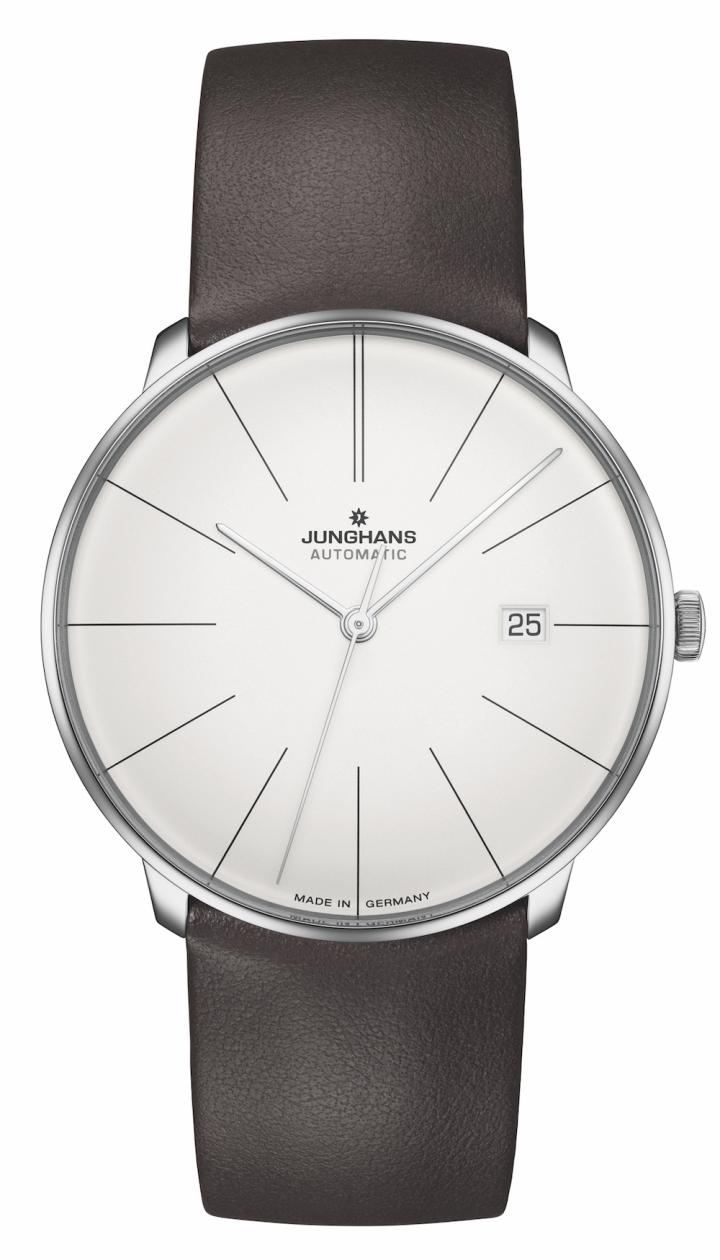 An innovative form and exquisite line management of the Meister fein Automatic lends an unprecedented angle to the Junghans Meister series – and emphasises that this anniversary should highlight one thing in particular: a reason, not only to cast a look back, but also to direct the focus ahead and to invest in the future of this traditional business. 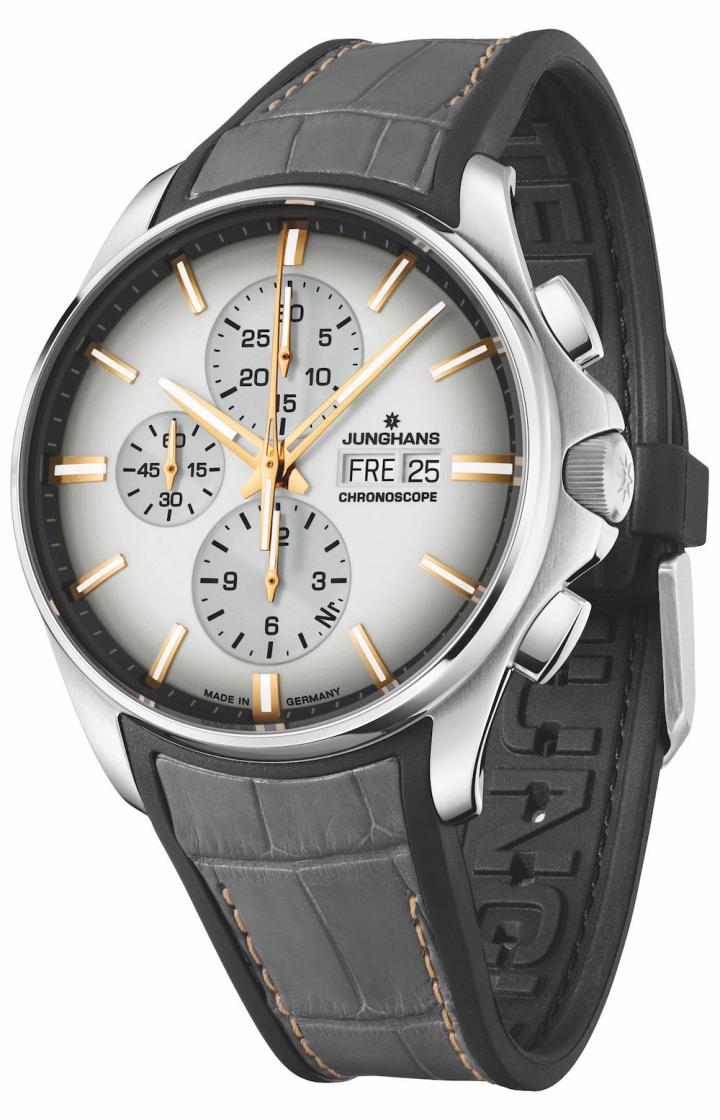 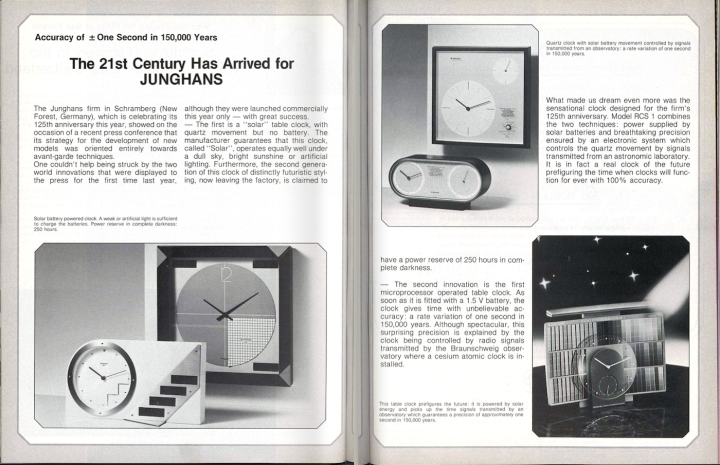 At the occasion of its 125th anniversary in 1986, Junghans showcased some avant-garde techniques, including a first solar table clock as well as a first microprocessor operated table clock.
©Europa Star Archives

THE 160-YEAR HISTORY OF UHRENFABRIK JUNGHANS

1861 In collaboration with his brother-in-law, Jakob Zeller-Tobler, Erhard Junghans establishes “Zeller & Junghans“ on the 14th April, 1861, as a business producing clock parts. Initially manufacturing components for Black Forest clocks, the first of their own timepieces appeared in 1866.

1888 The Junghans star is adopted as the official logo. Originally featuring five prongs and the letter “J” in the centre, the star was redesigned to feature eight prongs two years later and the rest of the trade name was added to the initial.

1903 A workforce of 3,000 and completion of more than three million time- pieces annually cements Junghans’s position as the largest clock manufacturer on earth. Junghans runs production plants and subsidiaries in Schramberg, Rottenburg and Schwenningen, as well as in the Austrian town of Ebensee, and in Venice and Paris.

1918 Designed by industrial architect Philipp Jakob Manz, the terrace building (Terrassenbau) becomes the new symbol of the Uhrenfabrik after only a two-year construction period. The nine-level terrace building allows an optimum yield of daylight for each workstation, and in turn guarantees maximum precision during production. 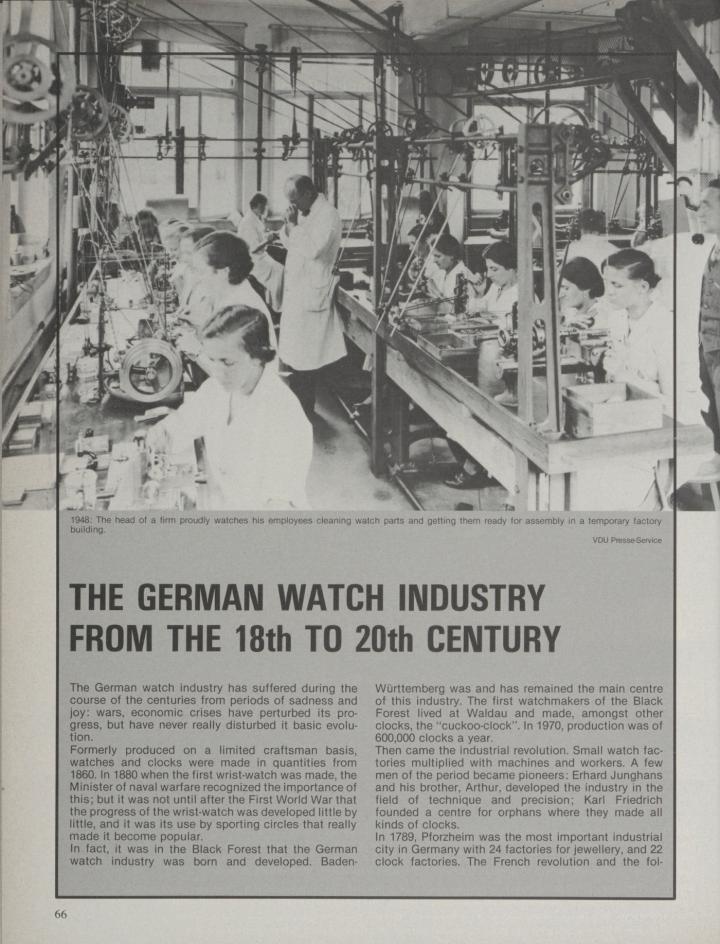 Erhard and Arthur Junghans were among the pioneers that “developed the industry in the field of technique and precision” in Germany.
©Europa Star Archives

1936 In the 1930s, Junghans begin constructing calibres and start producing their own watches. The premium quality movements are granted the designation J80/2 and are the centrepiece of the Meister watches.

1949 As early as 1946, Junghans have already began work on the first watch chronograph. Following a development period of three years, the internally perfected hand-winding movement J88 is unveiled with 19 stones, ratchet wheel and intricate Breguet hairspring. This robust calibre will become the core component of numerous Junghans chronographs.

1956 Development and production of more precise watch movements are becoming ever more important for Junghans. In 1951, Junghans is already Germany’s biggest producer of chronometers, and in 1956, the third largest anywhere in the world.

1957 With the J83, Junghans present the first self-winding movement with chronometer quality. To this day, this calibre in its many versions is still regarded as one of the most beautiful produced in Germany.

1961 Junghans began its collaboration with Swiss Bauhaus artist and product designer Max Bill back in the 1950s, with his design of the legendary kitchen clock. In 1961, Max Bill designs his first watches for Junghans – and still retain their design icon status to this day. 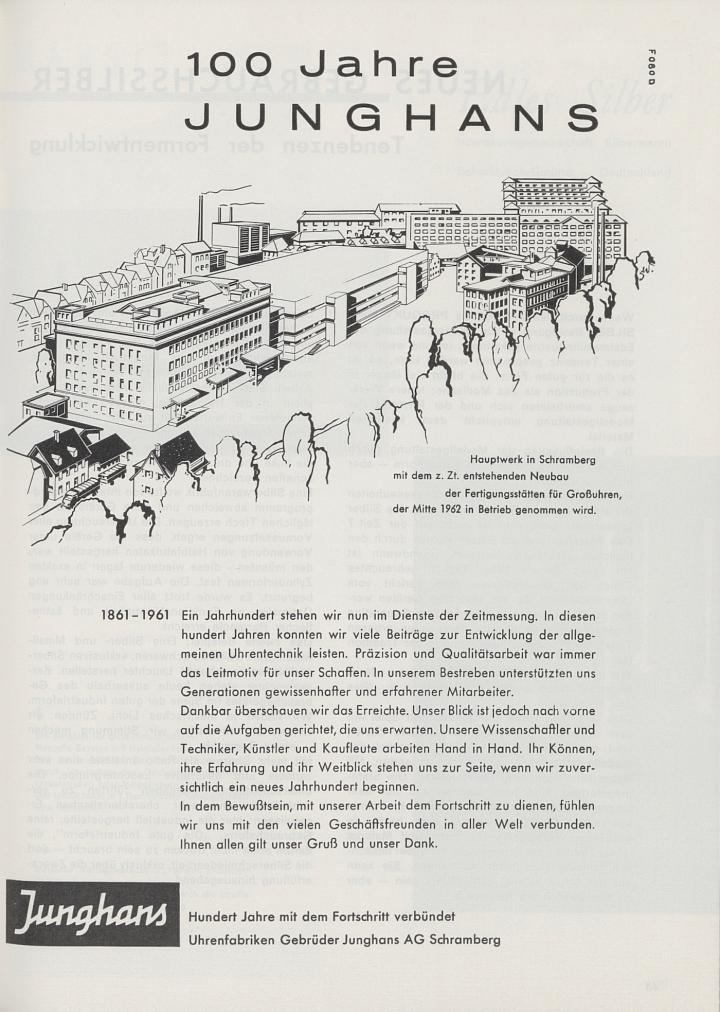 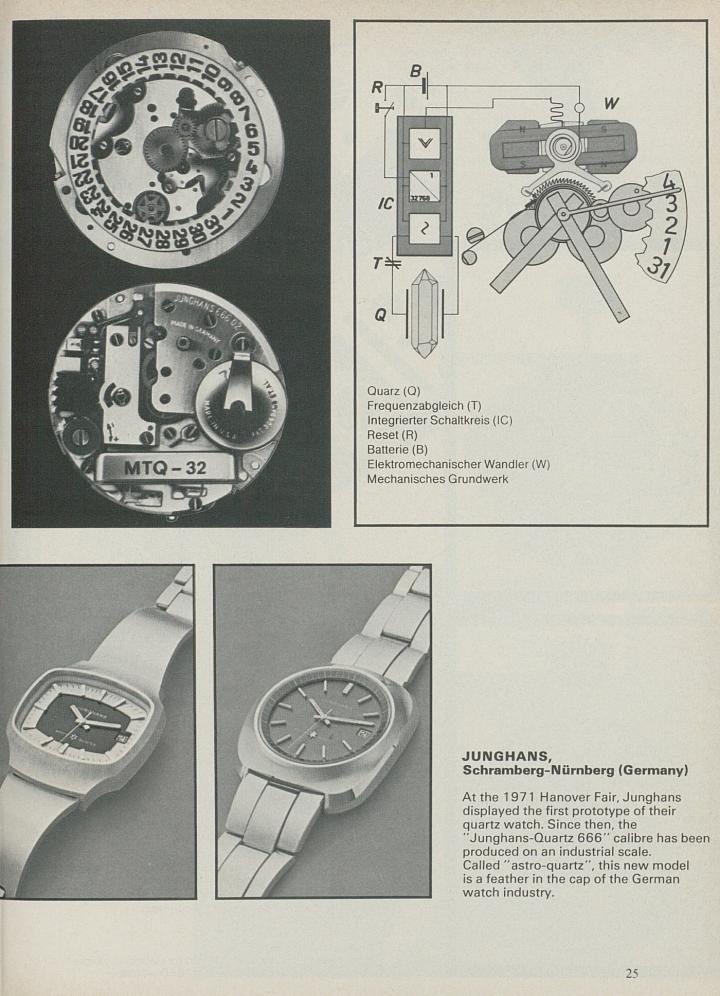 1972 Junghans set new standards in sports event timekeeping with the introduction of innovative measuring instruments. Electronically interconnected starting blocks, double photoelectric barriers and the very first colour photo finish allows an objective time measurement, accurate to a hundredth of a second, for all competitions at the summer games in Munich. 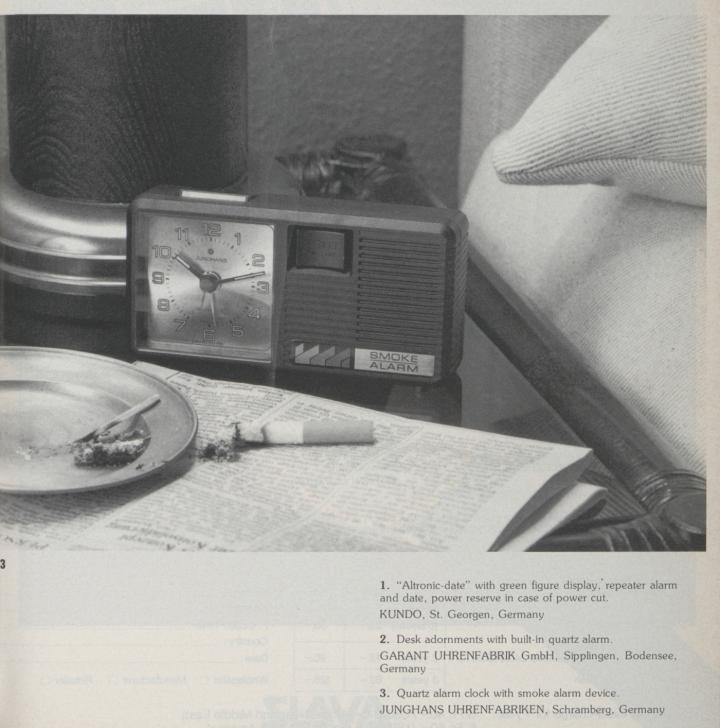 Innovation in all directions: a quartz alarm clock with smoke alarm device was introduced by Junghans in 1981.
©Europa Star Archives

1990 With the Mega 1, Junghans unveils the world’s first radio-controlled watch. 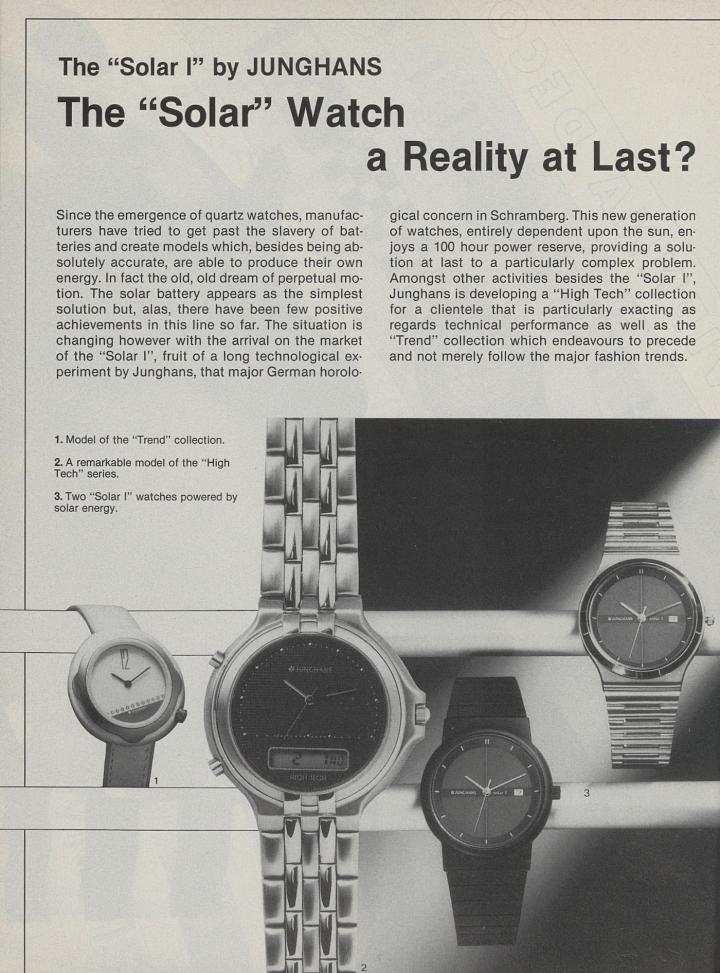 The “solar” revolution - a reality at last? Junghans’ model powered by solar energy, the Solar 1, as featured in Europa Star in 1988
©Europa Star Archives

1995 With the Mega Solar Ceramic, Junghans launch a watch which is considered second to none due to its combination of ceramic case, and radio-controlled and solar technology.

2004 With the newly developed and patented, intelligent multi-frequency radio-controlled movement, Junghans are able to present a watch which is not only capable of receiving and automatically converting a signal in Germany and Europe, but also in Asia and North America.

2008 Given the opportunity of producing premium quality mechanics in Schramberg once again, work had already started on the “Erhard Junghans” mechanical series back in 2006. The “Erhard Junghans 1” model unveiled in 2008 incorporates the intricate hand-winding movement J325, which combines traditional drive with the very latest production processes. The result is an exclusive watch collection limited to just 12 units – hand-crafted with loving attention to detail in the Erhard Junghans studio.

2009 Schramberg businessmen Dr. Hans-Jochem Steim and Hannes Steim take control of Junghans. The honorary citizen of Schramberg and his son mark a new era for the traditional company.

2011 The watch manufacturer celebrates its 150-year anniversary – and reinterpreted the traditional Meister series. 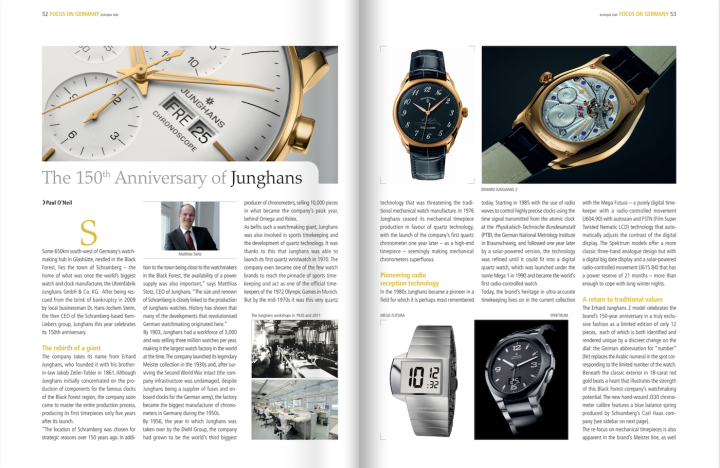 The 150th anniversary of Junghans in 2011, under new ownership, is described as the “rebirth of a giant”. The revival of the Meister line signals a re-focus on mechanical timepieces.
©Europa Star Archives

2016 Junghans launches the Meister Pilot. This model synergises the distinctive design characteristics of the classic pilots’ chronographs – service watch for pilots in the German Armed Forces in the 1950s – with the elegant style of today’s Meister collection.

2017 Characterised by the passion for motor cars shared by the founding family and the current owners, Junghans present the Meister Driver. This series incorporates the design of classic vehicle instrument panels.

2018 Junghans celebrate 100 years of the terrace building with the limited edition Meister Chronoscope Terrassenbau models. The newly opened Terrassenbau Museum welcomes visitors into the listed building to participate in a journey through time, allowing guests to witness watch production in the Black Forest and the entire history of Uhrenfabrik Junghans. In addition, a completely new type of radio-controlled movement is unveiled. The Meister MEGA and max bill MEGA allow Junghans to combine precise technology with classic watch design for the very first time.

2019 In celebration of the 100-year anniversary of the Bauhaus, Junghans commemorate their special relationship with the school of design, and in particular with Max Bill – and launch multiple limited-edition anniversary models.

2020 The Meister S Chronoscope is a genuine sports watch to complement the Junghans Meister series. This watch combines the classic elegance of the Meister collection with a sporty configuration and durable materials.

2021 Uhrenfabrik Junghans celebrate their 160-year anniversary under the motto “Creating time – yesterday, today and for generations to come.” 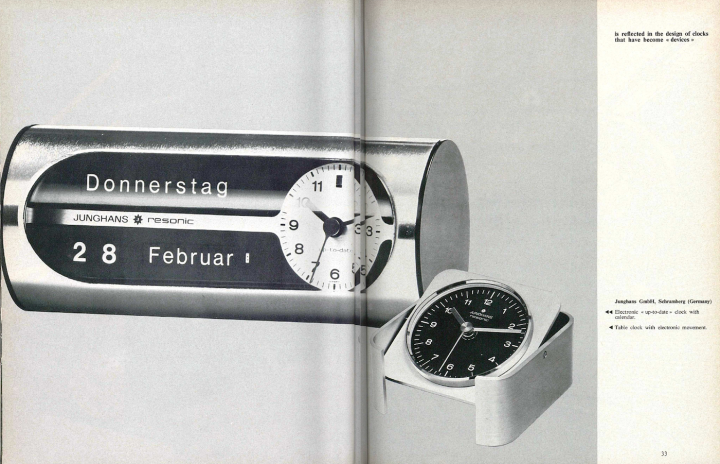 The “Resonic”: a futuristic clock by Junghans in a 1974 edition of Europa Star
©Europa Star Archives

TIME.KEEPER Tutima’s Flieger collection was the first German chronograph to feature a flyback function as seen in their Grand Flieger in 1941. This new iteration is (...)

HIGHLIGHTS “The ring date shows what this calibre is capable of”: Metro neomatik 41 Update is the name of a brand-new watch from NOMOS Glashütte, which debuted at (...)

TIME.KEEPER In the latest stage of its development, the S.A.R. Rescue-Timer, a watch originally meant for sea rescue crews, is now able to turn the night into (...) 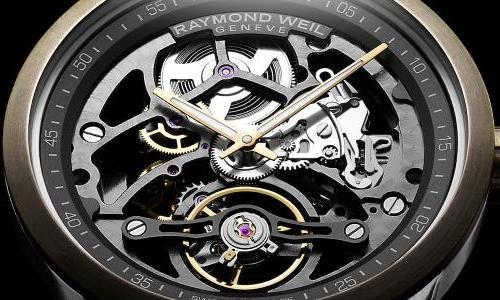 The latest Freelancer Skeleton Calibre RW1212 from Raymond Weil aims to combine materials from the past with Swiss precision craftsmanship of (...) 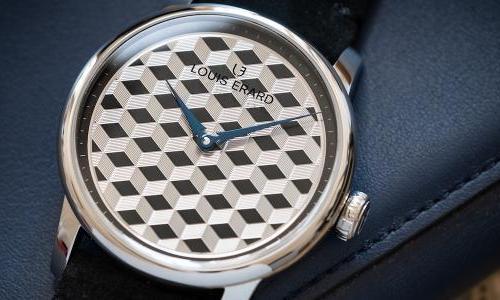 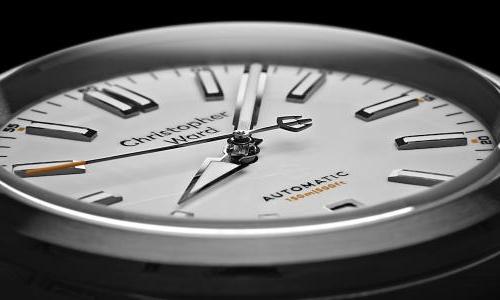 Christopher Ward, having produced pilots’ watches, divers’ watches and dress models in formal styles, wanted to combine all three watch roles into one (...) 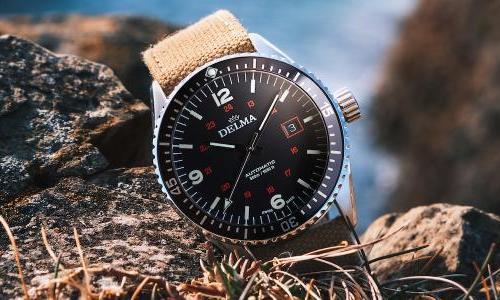 The Field is an expansion of the Cayman collection which is built upon the design of a 1970s Delma divers’ watch.