An 8-day clock in the form of a stylized 1930s plane, “Time Flies” is a partnership between l’ECAL and L’Epée 1839, embodying the adventurer’s airplane of our childhood dreams. This new creation follows the interstellar adventures of Starfleet Machine and The 5th Element, exploring the solar system with Destination Moon, and excursions through the lower atmosphere with The Hot Air Balloon.

An 8-day clock in the form of a stylized 1930s plane, “Time Flies” is a partnership between l’ECAL and L’Epée 1839, embodying the adventurer’s airplane of our childhood dreams. This new creation follows the interstellar adventures of Starfleet Machine and The 5th Element, exploring the solar system with Destination Moon, and excursions through the lower atmosphere with The Hot Air Balloon.
W

ith its newest creation “Time Flies”, L’Epée 1839 pays tribute to the conquest of the skies and one of the most brilliant inventions ever made: the airplane. Aviation made its mark on the last century, motivating adventurers to go ever higher and ever further, and it changed traveling forever. The plane captured the collective imagination, and there have been many stories of heroic aircraft journeys. Who never had a childhood dream of adventure as a pilot.

Some things fire up imagination and fantasy more than others. Some adventures only the elite, can enjoy, but the boundless expanse of the imaginary world is accessible to everyone. Time Flies is an 8-day clock in the form of a stylized 1930s plane, offering just enough structure to provide form, and just enough empty space to inspire our imaginations.

Time Flies is a partnership between l’ECAL and L’Epée 1839, embodying the adventurer’s airplane of our childhood dreams, its minimalist form evocative rather than definitive. 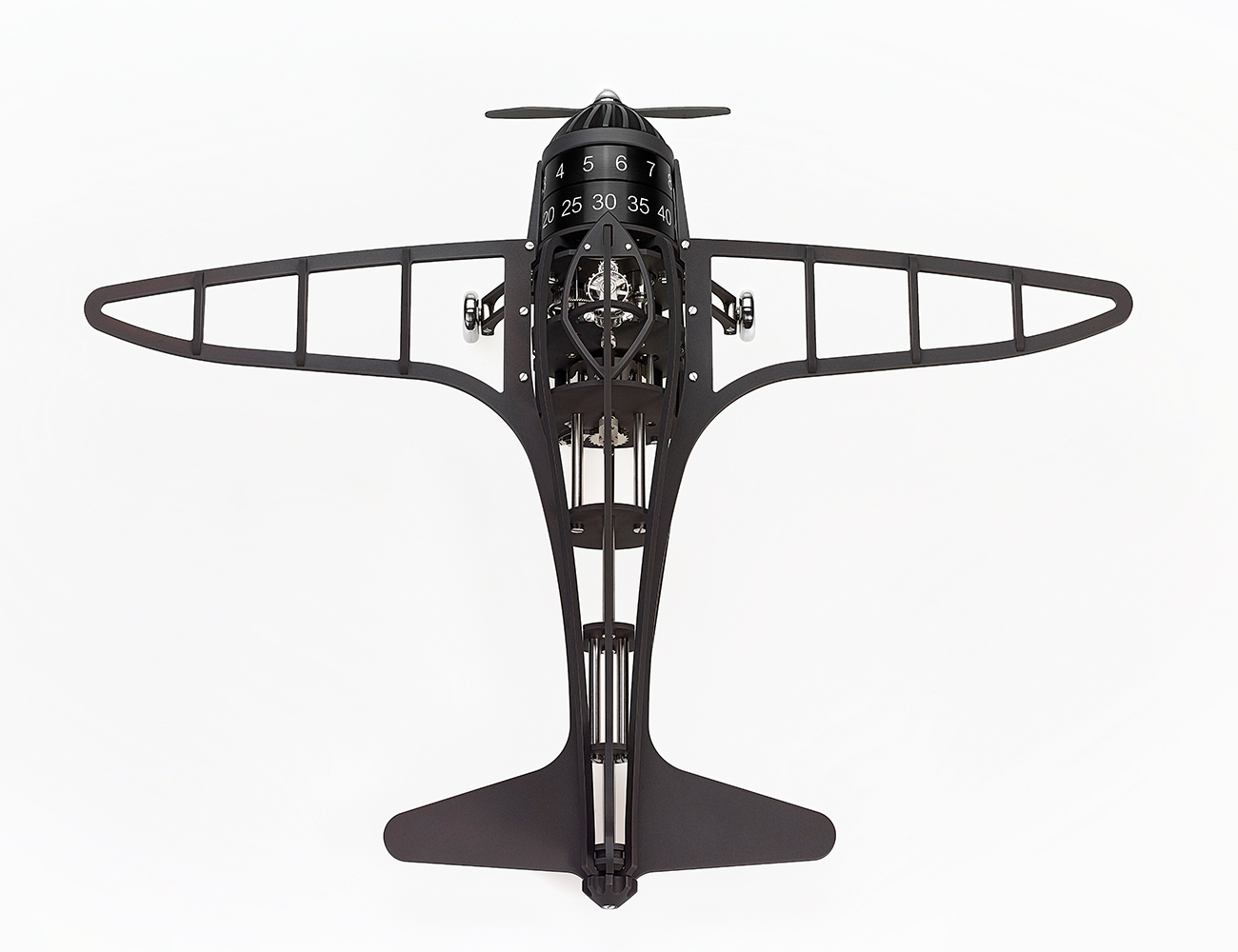 Hours and minutes are displayed on large diameter stainless steel disks with black PVD coating on a circular-brushed satin finish and stamped numerals. A quick glance is enough to read the time thanks to the excellent legibility of its display, but the spectacular, skeletonized movement is worthy of deeper contemplation. The movement, built specifically for this Time Flies, allows the escapement, which regulates precision, to be displayed in the cockpit. Accuracy is in the pilot’s seat! 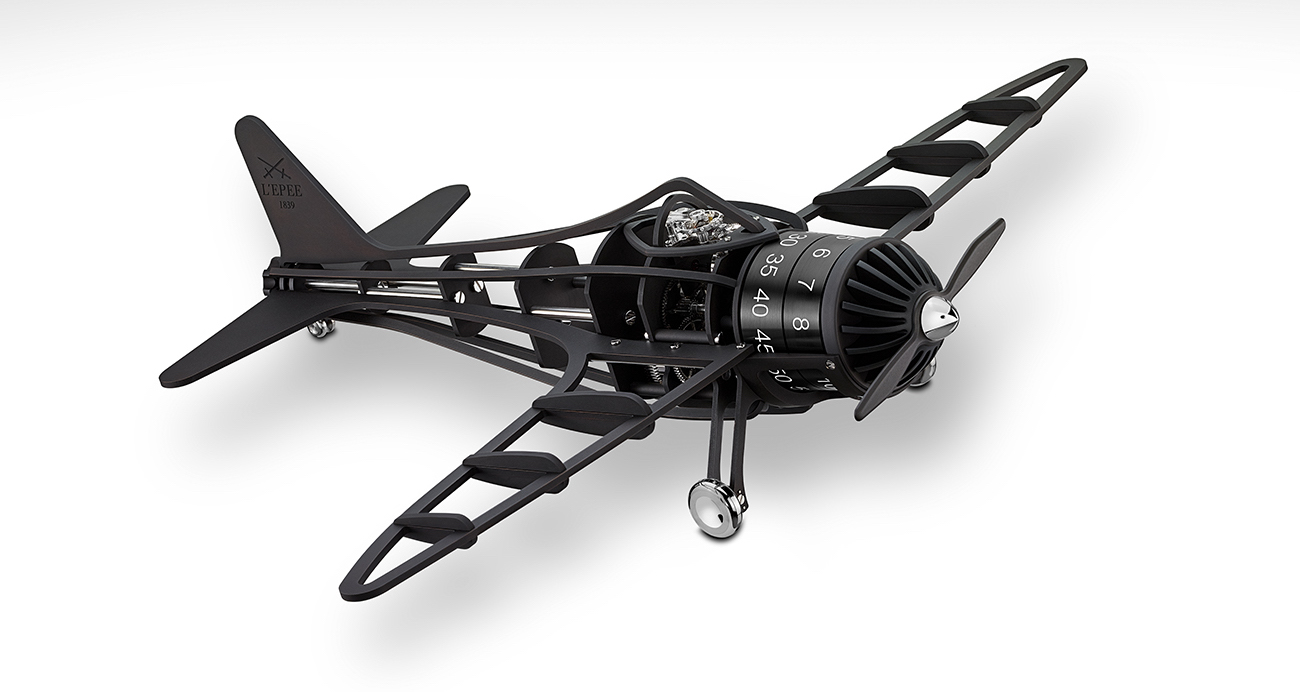 The architecture of the 8-day movement, developed in-house by L’Epée 1839, follows the form of a real airplane. As in a plane, power comes from the front where the engine is located, and is generated by a fully openworked crown reminiscent of engine cooling radiators just behind the propeller. When fully wound Time Flies can soar for a full eight days before “refueling.” 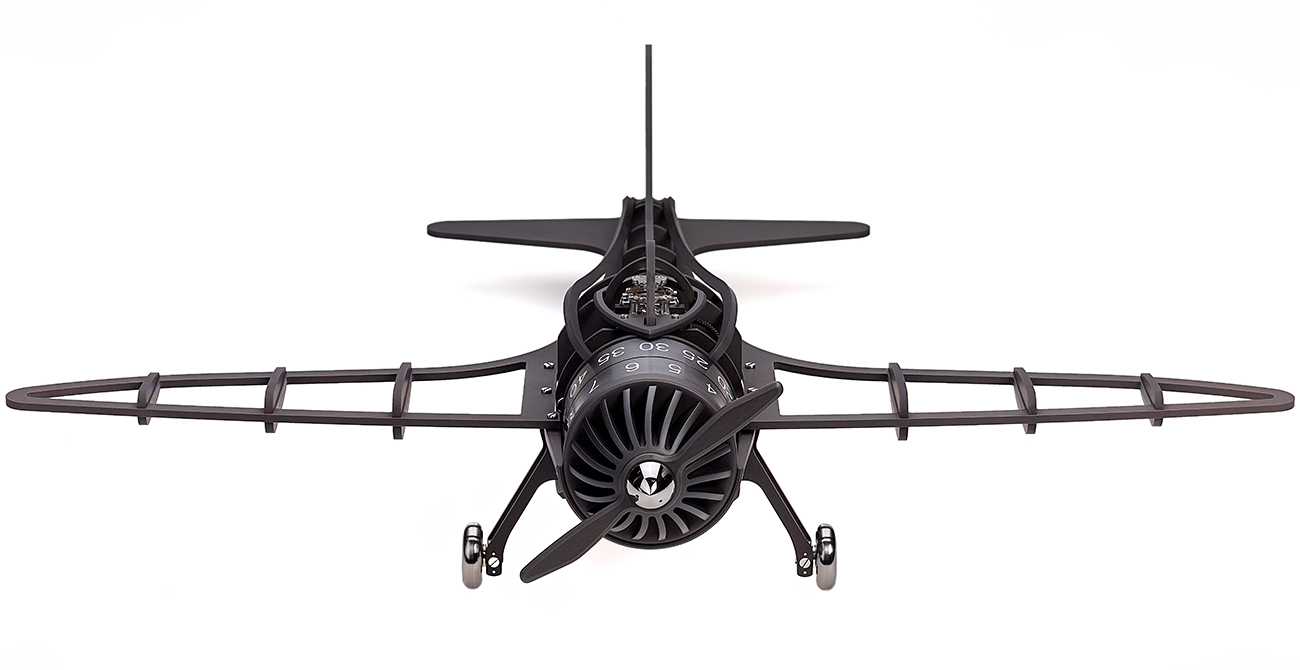 An airplane’s control and instrumentation systems are located within the cockpit; and the same is true for Time Flies, which has a horizontal precision regulator in its cockpit, just above the wings. The constantly oscillating balance-wheel of the regulator draws the eye, and is protected from both cosmic radiation and curious fingers by a series of small panels forming the cockpit’s cage.

In another nod to childhood toys and fantasies, the propeller spins freely at a simple push of the finger. Despite of its airy skeleton, Time Flies weighs a substantial three kilograms, its three-wheel landing train providing excellent stability.

For a truly sensational display, L’Epée 1839 has developed a mounting stand on which Time Fliescan be admired taking-off. An innovative latch beneath the movement clips it securely in place. On its stand Time Flies is as elegant placed on your desk as on its pedestal in a library.

L’Epée 1839 takes off once again in the conquest of the air, accomplishing one of humankind’s wildest dreams. For centuries, man has dreamed of being able to take to the air and fly like a bird. From Leonard de Vinci’s day to ours, geniuses and aeronauts developed aviation, pushing back its limits again and again, repeatedly challenging the laws of physics and daring to achieve the impossible. 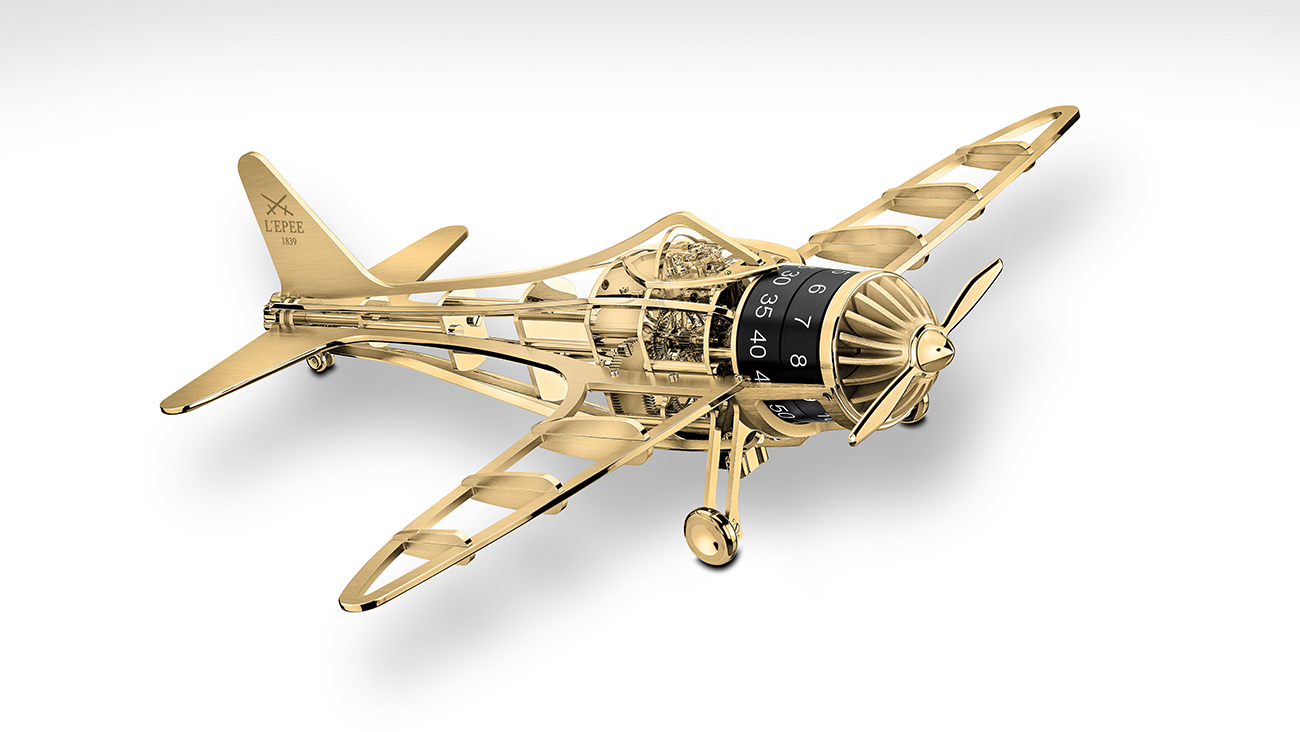 Aviation was the theater of many exploits. In 1909, after 32 attempts, pilot Louis Blériot made the first crossing of the English Channel (40 kilometers between Calais and Dover). This feat of perseverance had a global impact, and pilots like Blériot, these “magnificent men in their flying machines,” caught the world’s imagination. Louis Blériot, always the pioneer, invested all his savings in his own aircraft factory. During the same period, Louis Charles Bréguet, a descendant of the watchmaker and physicist Abraham Louis Breguet, was another of the first aircraft manufacturers.

Breguet and Blériot are the founding fathers of commercial aviation. Blériot was the first to design aircraft for serial production, which notably saw service in the famous company Aéropostale.

Flying great distances in all weather conditions presented formidable challenges for these early aviators. Postal aviation would never have existed without the courage of its first pilots, true heroes who inspired future generations. Every flight was a high-risk adventure, embarked upon with no instruments or aids but the eyes and tenacity of its pilots. 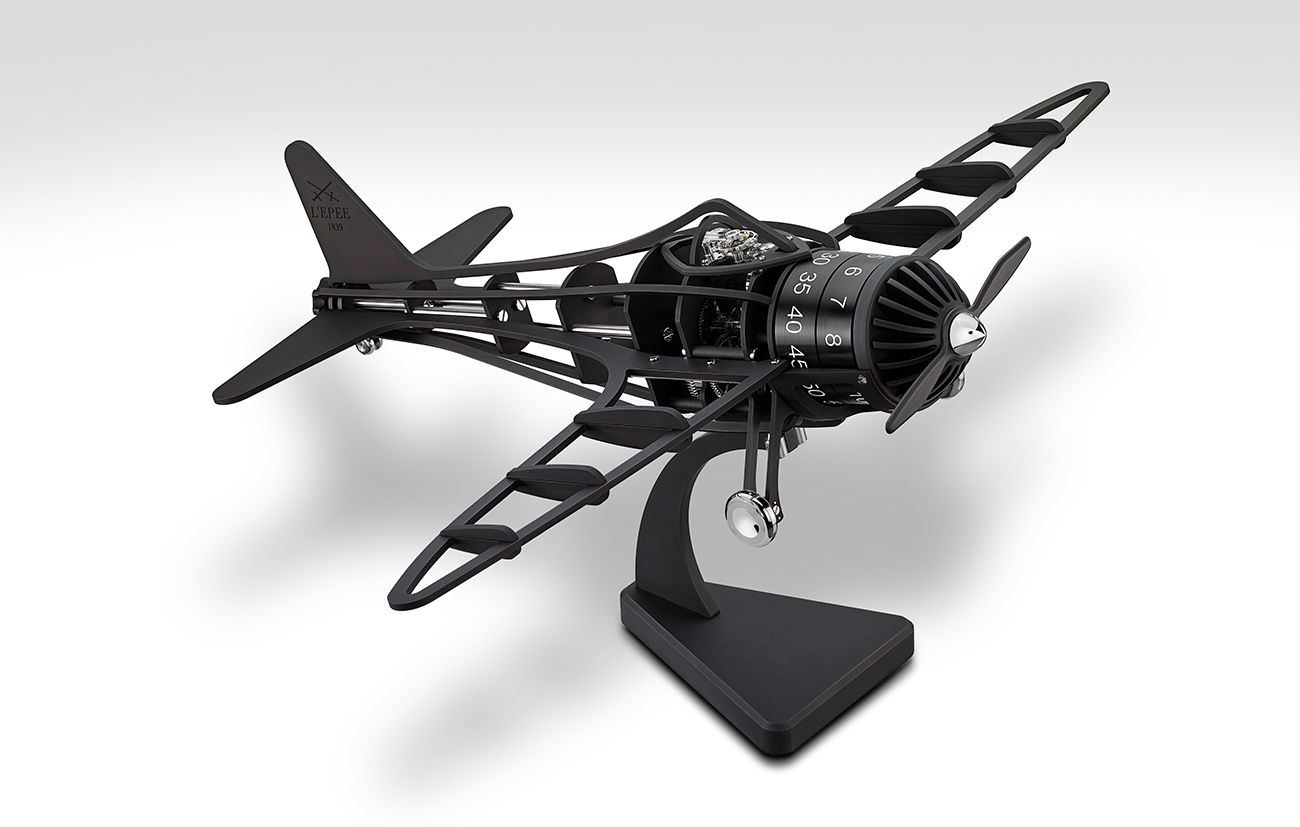 These extraordinary pilots were models of courage and determination, traveling endlessly, living a life of adventure between earth and sky, triumphing over oceans, African deserts, and mountain chains. The Aéropostale adventure was fascinating and impressive — and because it was brimming with mechanical marvels and technological triumphs, it demanded audacity and sacrifice of its pilots.

Aeronautical research was in constant development in a quest for new exploits and records. As early as 1921, Louis Charles Breguet believed it was possible to reach the speed of sound. In 1964, research began on designing the first supersonic airplane capable of transporting passengers. 1977 heralded the introduction of Concorde’s Paris-New York scheduled passenger service.

Time Flies is a return to its origins for L’Epée, which, in providing the clock for the Concord, is the only horological manufacture to have equipped a commercial supersonic aircraft. 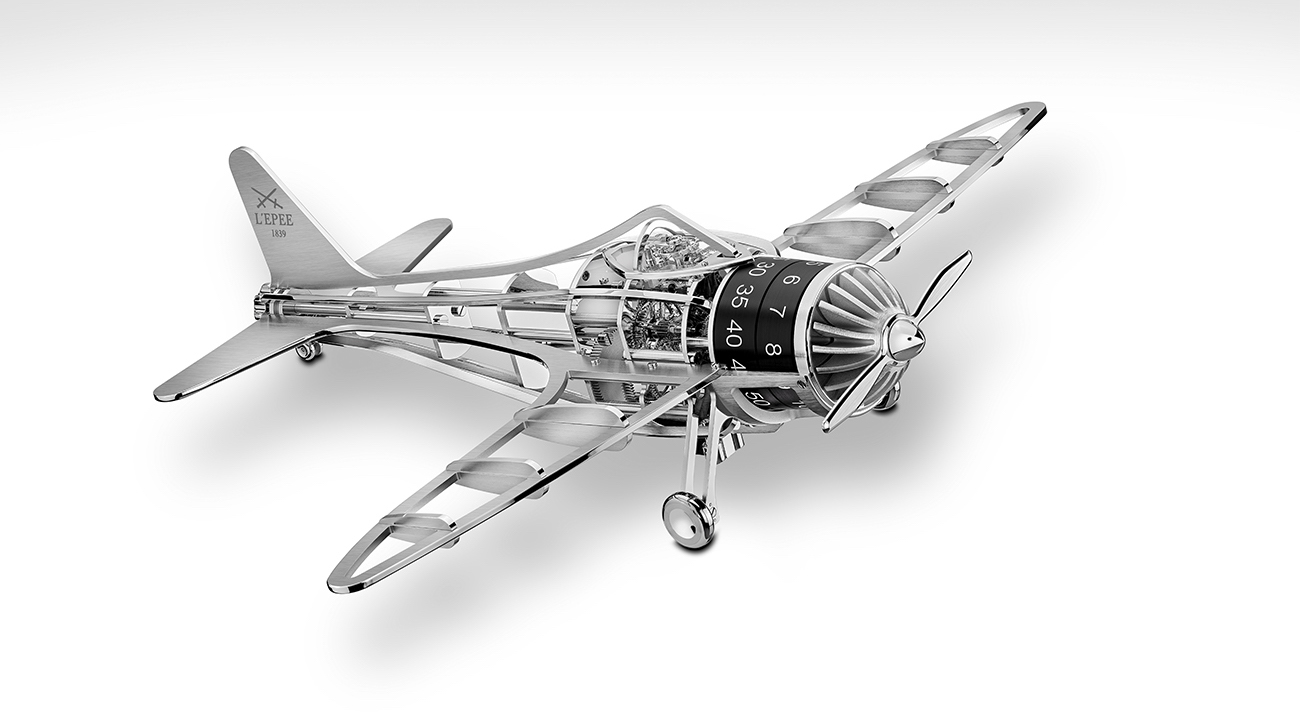 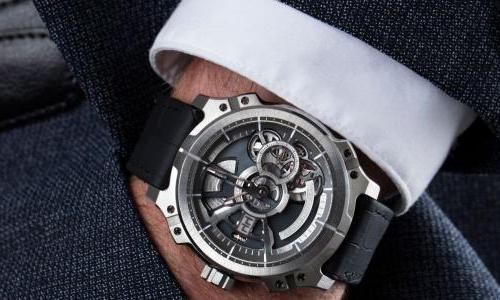 The Skeleton Armure MU05 boasts four successive levels of dials, formed by a bezel, a flange, and two levels of dials with different treatments: one in NAC (...)