Jaquet Droz celebrates the birth of its watchmaking founder, exactly 300 years ago on July 28, 1721. For this occasion, the Grande Seconde Moon has been reimagined in two exclusive anniversary editions: one explores the tradition and the other modern inspirations.

Jaquet Droz celebrates the birth of its watchmaking founder, exactly 300 years ago on July 28, 1721. For this occasion, the Grande Seconde Moon has been reimagined in two exclusive anniversary editions: one explores the tradition and the other modern inspirations.
W

hat piece perfectly embodies the spirit of Jaquet Droz? Without a doubt, it is the most recognizable face: the Grande Seconde. Based on a figure "8” design, this creation organizes time in a unique way, with off-centered hours and minutes at the top, complemented by a large seconds dial at 6 o’clock.

This simple, sleek and timeless design has been given the utmost care to preserve its essence, while necessary evolutions have been made to adapt it to contemporary watchmaking. Among these is the Moon Phase, which has led to the birth of the Grande Seconde Moon.

Today, Jaquet Droz has extensively redesigned its icon to offer two exclusive versions that reflect its dual heritage: on the one hand respecting its age-old craftsmanship, and on the other, a desire to take the Grande Seconde Moon into the 21st century.

Now, for the first time, these two new models feature a 41 mm diameter. The Grande Seconde Moon, which has previously been available in 43 mm and 39 mm versions, comes in a comfortable and contemporary 41 mm diameter, suitable for both men’s and women’s wrists. 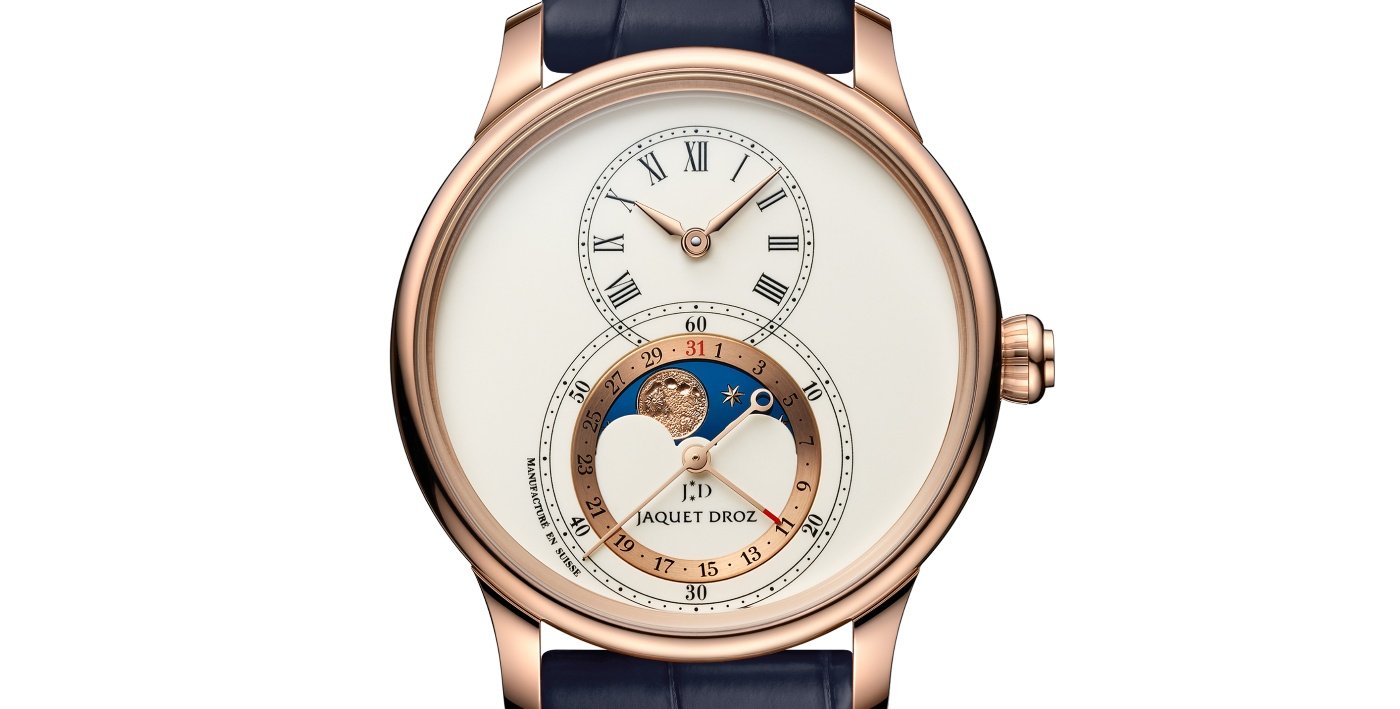 The first piece pays tribute to Pierre Jaquet-Droz and embodies the traditional aspects of the Maison. It is equipped with an ivory Grand Feu enamel dial, a signature of the Maison’s expertise, with Roman numerals for the hours and minutes, and Arabic numerals for the seconds, all in the purest traditional spirit of the Grande Seconde. It is worn on a midnight blue strap, evoking the starry sky that reveals the Moon.

The second piece features a matte black dial in an intense, dark astral variation, which gracefully reveals the Moon Phase. For the first time, the piece loses its Arabic and Roman numerals for its hour-minute indications. Here, they are replaced by red gold indexes, giving the piece a more contemporary, structured and refined style. This modern look is emphasized by a hand-made strap in matte black calfskin. With a truly contemporary approach, Jaquet Droz has designed a new Grande Seconde Moon with only two tones, where the brightness of the red gold is matched only by the depth of the intense black.

These two variations of the Grande Seconde Moon 300th Anniversary edition both feature an 18K red gold case, which houses the 2660QL4 self-winding movement, with a 68-hour power reserve, as well as a silicon balance spring and pallet lugs. Jaquet Droz has equipped it with an in-house development that gives its Moon Phase unparalleled accuracy. Known as the Mechanism 135, it considerably reduces the usual margins of error of the Moon Phase display and only requires a single adjustment every 122 years.

This is as close as possible to a real synodic revolution (29 days, 12 hours and 45 minutes for the Grande Seconde Moon, for an actual revolution of 29 days, 12 hours, 44 minutes and 2.8 seconds), this Mechanism 135, resting on a 135-tooth lunar disk (instead of the usual 59) guarantees the piece an age-old precision that can be adjusted with a stylus, using an invisible corrector hidden in the case at 8 o’clock.

Each version is hand-engraved with “Pierre Jaquet-Droz, 300ème Anniversaire” on the back, where the sapphire case reveals a red gold oscillating weight, turning to the rhythm of a time that Jaquet Droz has recorded for more than three centuries.