The combination of these unique features makes each of the 200 watches in this limited edition a timepiece that is unique in three ways. But there’s more: additionally, the newly developed manufacture calibre – like the Zeitwerk Date before it – now doubles the power reserve to 72 hours.

The combination of these unique features makes each of the 200 watches in this limited edition a timepiece that is unique in three ways. But there’s more: additionally, the newly developed manufacture calibre – like the Zeitwerk Date before it – now doubles the power reserve to 72 hours.
T

he revolutionary technology and design concept of the Zeitwerk model series has been unique since 2009. Developed exclusively for A. Lange & Söhne timepieces, this new version introduces Lange’s proprietary honey gold. And the designation “Lumen” refers to the specially developed, semi-transparent dial that makes the luminous jumping numerals display fully visible.

The combination of these unique features makes each of the 200 watches in this limited edition a timepiece that is unique in three ways. But there’s more: additionally, the newly developed manufacture calibre – like the Zeitwerk Date before it – now doubles the power reserve to 72 hours.

With its three-disc jumping numerals mechanism that indicates the time in a digital format, the Zeitwerk has ranked among the most progressive mechanical wristwatches since 2009. In the interest of superb legibility at all times, the product developers at A. Lange & Söhne questioned everything except the mechanical paradigm.

In addition to two discs for the tens and units-minutes, the jumping numerals mechanism is endowed with a large hour ring that spans almost the entire diameter of the movement. All numerals are identical in size. They switch precisely and read from left to right.

Two mainspring barrels deliver the power needed for switching. The switching point is controlled by a patented constant-force escapement. It also assures that the balance is always driven with constant power. Refined from the bottom up, the Zeitwerk calibre L043.9 has twice the power reserve of its predecessor model – 72 hours. The pusher at 4 o’clock is new. It allows the hour indication to be switched separately, which in turn makes it simpler to set the time. The switching impulse is generated when it is released. The advantage is that switching is always uniformly executed, regardless of how gently or vigorously the pusher is actuated. 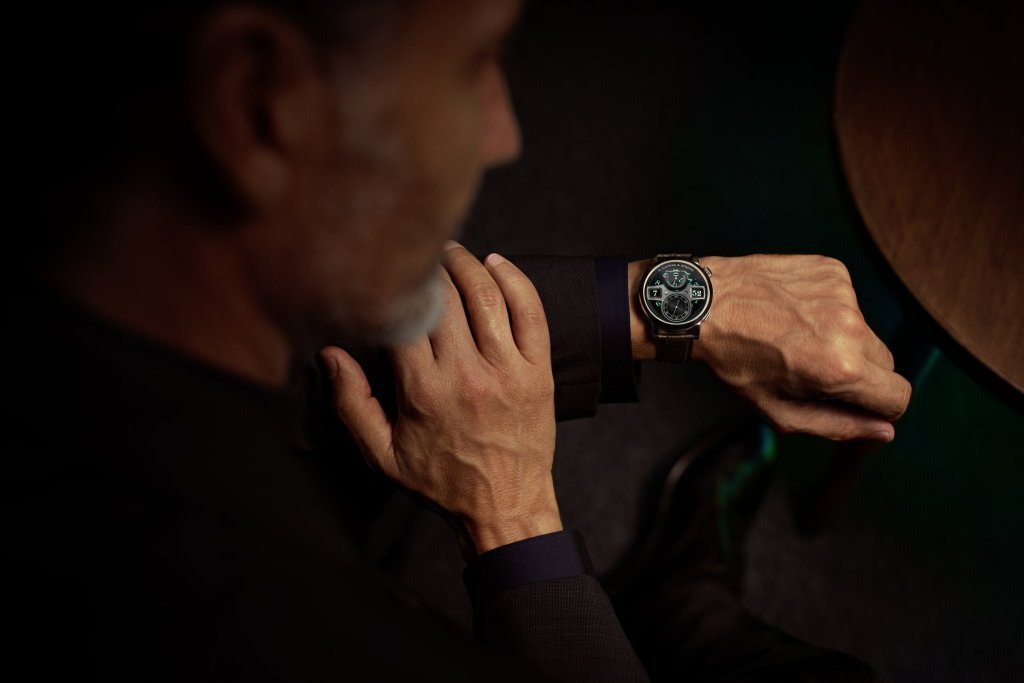 The pioneering technical concept is paired with an equally innovative design. One of its most prominent elements is the curved time bridge that dominates the dial. It is part of the movement and forms an elegant frame for all time indications. In the Zeitwerk Honeygold “Lumen“, it consists of black rhodiumed German silver and thus integrates well with the dark sapphirecrystal dial.

With a gentle click, the new manufacture calibre L043.9 instantly switches the numerals display of the Zeitwerk Honeygold “Lumen” from one minute to the next until, at the top of the hour, the sophisticated mechanism simultaneously switches all three numerals discs by one increment.

In the second generation as well, a patented constant-force escapement controls the complex switching processes and at the same time handles two important functions: on the one hand, it generates the impulse for the jumping advance of the time display. On the other hand, it drives the balance with nearly uniform power across the entire run time. This keeps the amplitude constant, which has a positive effect on rate stability.

The integration of a pusher for correcting the hour indication, first introduced in the Zeitwerk Date, required considerable effort from the designers and increased the number of movement parts to 462. To enable the correction independently of the switching cycles of the time display, a clutch uncouples the hour ring from the jumping numerals mechanism each time the pusher is pressed. The setting of the minute display in both directions is performed with the crown located at 2 o’clock. 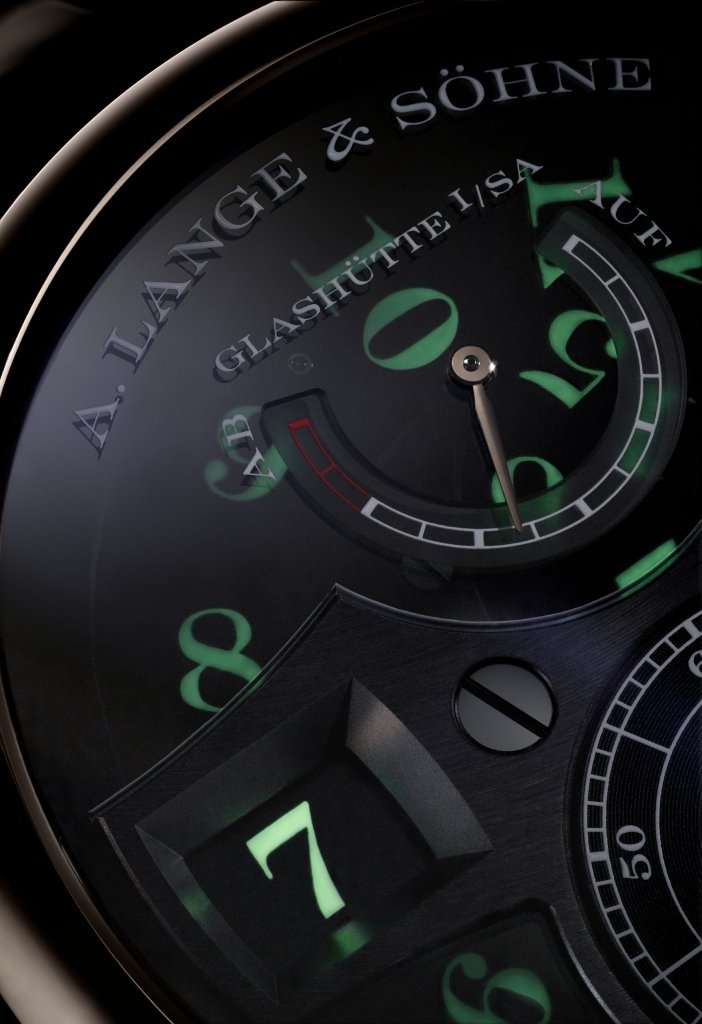 The cam-poised balance wheel with a freely oscillating balance spring beats with a frequency of 18,000 semi-oscillations per hour (2.5 hertz). Further Lange-style quality features of the Zeitwerk Honeygold “Lumen” include the exquisite artisanal finissage of the twofoldassembled movement, much of which can be admired through the sapphire-crystal caseback.

The light-permeable coating of the dial allows the luminous numerals that are not exposed in the aperture to absorb enough UV light and thus light energy needed to make them glow in the dark. Consequently, the digital display remains visible even right after each switching sequence. At night, the numerals discs that are only vaguely discernible during the day cause the watch to glow.

At A. Lange & Söhne, “Lumen” is the name of a series of timepieces that rely on current scientific insights to deliver a clear design statement. The Zeitwerk “Luminous” presented in 2010 was followed by “Lumen” editions of the Grand Lange 1 (2013), the Grand Lange 1 Moon Phase (2016) and the Datograph Up/Down (2018).

Limited to 200 watches, the Zeitwerk Honeygold “Lumen” continues the tradition that began eleven years ago and transcends it. The case, with a diameter of 41.9 millimetres, is made of Lange’s proprietary honey gold – a first for a “Lumen” model. Various admixtures and a special thermal treatment endow the 18-carat gold alloy with extra hardness and an inimitably warm lustre. The hands of the power-reserve indicator and of the subsidiary seconds as well as the Lange prong buckle are made of the same material. Combined with a dark dial and a darkbrown leather strap, the hue is an eye-catcher.