The Air Command collection is inspired by a highly sought-after 1950s Blancpain chronograph that was produced in tiny quantities. In the slipstream of its predecessor, the new Air Command model features sophisticated styling and offers two distinct timing modes: a chronograph with flyback function and a countdown bezel.

The Air Command collection is inspired by a highly sought-after 1950s Blancpain chronograph that was produced in tiny quantities. In the slipstream of its predecessor, the new Air Command model features sophisticated styling and offers two distinct timing modes: a chronograph with flyback function and a countdown bezel.
B

orn in the mid-1950s, the Air Command chronograph is probably the rarest Blancpain watch of its era. The only existing traces of its past are the few snippets of information sporadically gathered at auctions – where Air Command pieces have fetched stratospheric prices – and the scattered memories treasured by the descendants of the great 1950s Blancpain “family”.

Blancpain’s new Air Command, which is joining the eponymous collection, fully reflects the spirit of the vintage pilot’s watch. It features a flyback chronograph and a countdown-type rotating bezel. The flyback function is a valuable element for pilots, as it enables them in a single press to reset the current timing operation and start a new one while the chronograph is running.

With a conventional chronograph, each new measurement requires three presses – on two separate pushers – to stop, reset and restart the mechanism. The purpose of the countdown bezel is to indicate the time remaining until the destination is reached. Its numerals or hour-markers run counter-clockwise, unlike those on the bezel of a diver’s watch. The Blancpain Air Command also has a tachymeter scale indicating ground speeds, a 30-minute counter with three elongated markers marking three-minute increments and a 12-hour counter. 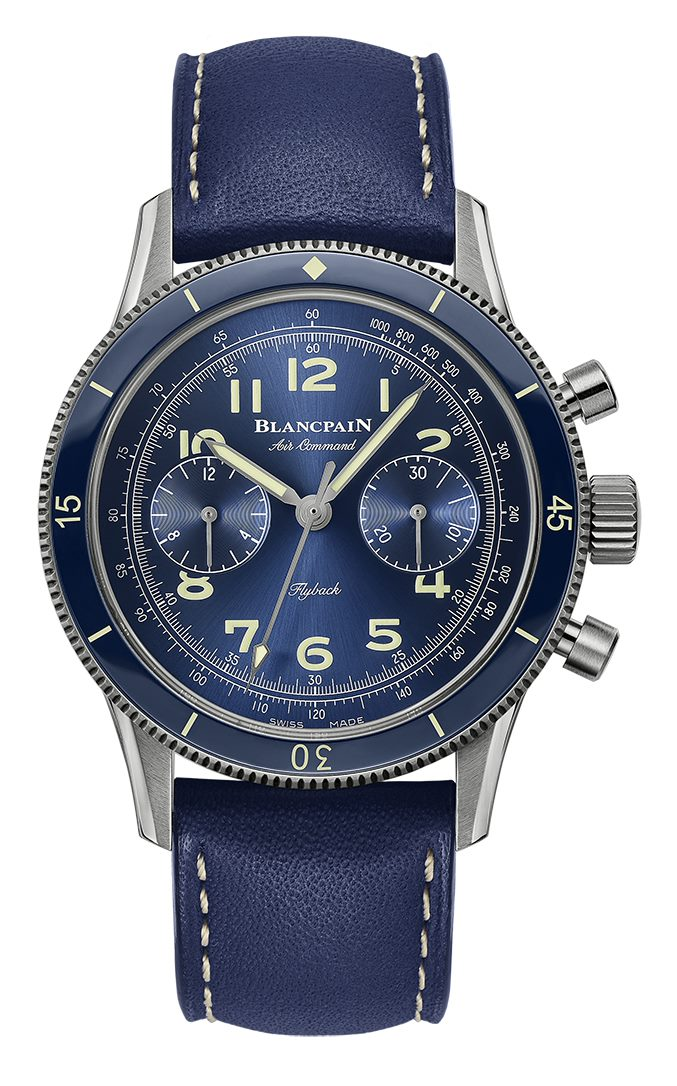 Blancpain has chosen to highlight these indications by means of a deep blue colour that energises the character of the watch, instilling the perfect touch of modernity. The dial is enhanced by a fine sunburst pattern, while the chronograph counters are finely snailed. This contrast heightens the legibility of the timepiece, which is optimal for both day and night thanks to the use of the watch’s bezel, which incorporates a scratch-resistant ceramic insert matching the dial colour.

Further intensifying the emotions procured by a timepiece of this nature, Blancpain has equipped both sides of its Air Command model with a “glass box” sapphire crystal, a strong aesthetic element of 1950s models.

The back of the watch reveals the Manufacture F388B movement (a variant of the F385), distinguished by a free-sprung silicon balance oscillating at a frequency of 5 Hz. The design reflects Blancpain’s philosophy of both precision and robustness. The free-sprung balance-andspring assembly regulated by inertia screws was conceived to facilitate fine adjustments and increase shock-resistance. Compared to generally used metal balance-springs, the silicon balance spring is insensitive to magnetic fields and guarantees greater precision throughout the power reserve. The 5 Hz frequency not only contributes to improved accuracy, but also enables a clear division of the seconds into 1/10th intervals.

The F388B movement comprises a column wheel system with a highly advanced Blancpain vertical clutch ensuring perfect starting and stopping without the jerks that occasionally occur with horizontal constructions. It is selfwinding and topped by an openworked gold oscillating weight with a snailed finish identical to that of the calibre’s bridges. This aesthetic coherence is accentuated by the colour of the rotor, which matches that of the watch case.

Available in red gold or grade 23 titanium – a high-end variety rarely used in watchmaking – the 42.5 mm-diameter case is water-resistant to 3 bar (approximately 30 metres). Alternating between satin-brushed and polished surfaces, such as on the outer edges of the lugs and the contact surfaces of the pushers, it reveals a refinement that confirms the prestigious character of the new Air Command. The model is paired with a blue calfskin strap featuring white stitching and setting the final touch to the sporty look of this pilot’s watch.