The single-piece edition Les Cabinotiers Grande Complication Bacchus combines Vacheron Constantin’s expertise in grand complication watches with its mastery of artistic crafts. This double-sided wristwatch comprises 16 complications, essentially astronomical and calendar-related, powered by Calibre 2755 GC16 with minute repeater and tourbillon. A technical feat housed in an 18K 5N gold case whose middle is sculpted in bas-relief. In tribute to the god of vines and wine, this “Bacchus” watch finds another source of inspiration in Johannes Kepler, resulting in a captivating association between mythology and astronomy.

The single-piece edition Les Cabinotiers Grande Complication Bacchus combines Vacheron Constantin’s expertise in grand complication watches with its mastery of artistic crafts. This double-sided wristwatch comprises 16 complications, essentially astronomical and calendar-related, powered by Calibre 2755 GC16 with minute repeater and tourbillon. A technical feat housed in an 18K 5N gold case whose middle is sculpted in bas-relief. In tribute to the god of vines and wine, this “Bacchus” watch finds another source of inspiration in Johannes Kepler, resulting in a captivating association between mythology and astronomy.
T

he single-piece edition Les Cabinotiers Grande Complication Bacchus offers proof that the tradition of combining artistic crafts with watchmaking expertise remains alive and well within the Maison. Vacheron Constantin’s master engravers and gem-setters have worked together to make this watch an applied arts masterpiece powered by inhouse Calibre 2755 GC16, whose complexity is expressed through its 16 complications.

This double-sided creation dedicated to Bacchus, the Roman god of vines and wine is adorned with ruby grapes set in gold foliage hand-carved. In addition to these mythological references, the tourbillon and minute repeater movement displays virtually every astronomical and calendar-type complication a timepiece can muster. This association between the study of the stars and the divine world, between Bacchus and Johannes Kepler, makes this timepiece doubly remarkable.

The 18K 5N pink gold case of this Les Cabinotiers timepiece features a decoration composed of vine leaves interspersed with bunches of ruby grapes. The engraver’s work is complemented by that of the gem-setter on the outside of the case in giving life to figurative motifs, making this watch a piece of fine craftsmanship. The two master artisans working on this model took turns, with the gem-setter first taking the case from the engraver’s hands and then returning it for the last finishing touches, a progressive duet-style operation that required more than 300 hours of combined dexterity.

Before embarking on such a project, an initial gem-setting test had to be performed on part of the case middle that had been prepared beforehand, so as to ensure the feasibility of the project and the various phases of its development. After putting the decoration in place using a scribing tool, the engraver began to prepare the model using the bas-relief technique that consists of creating cells or troughs by delicately “gouging” the material with a burin to make the foliage motif stand out.

This preparation included the 113 recessed spaces for the five different sized rubies that form the grapes along with enough surrounding material to hold them in place. The gem-setter then took over, in successive phases, in order to set the cabochon-cut rubies using a technique combining prong and bezel setting, involving a minimum of three points of attachment. 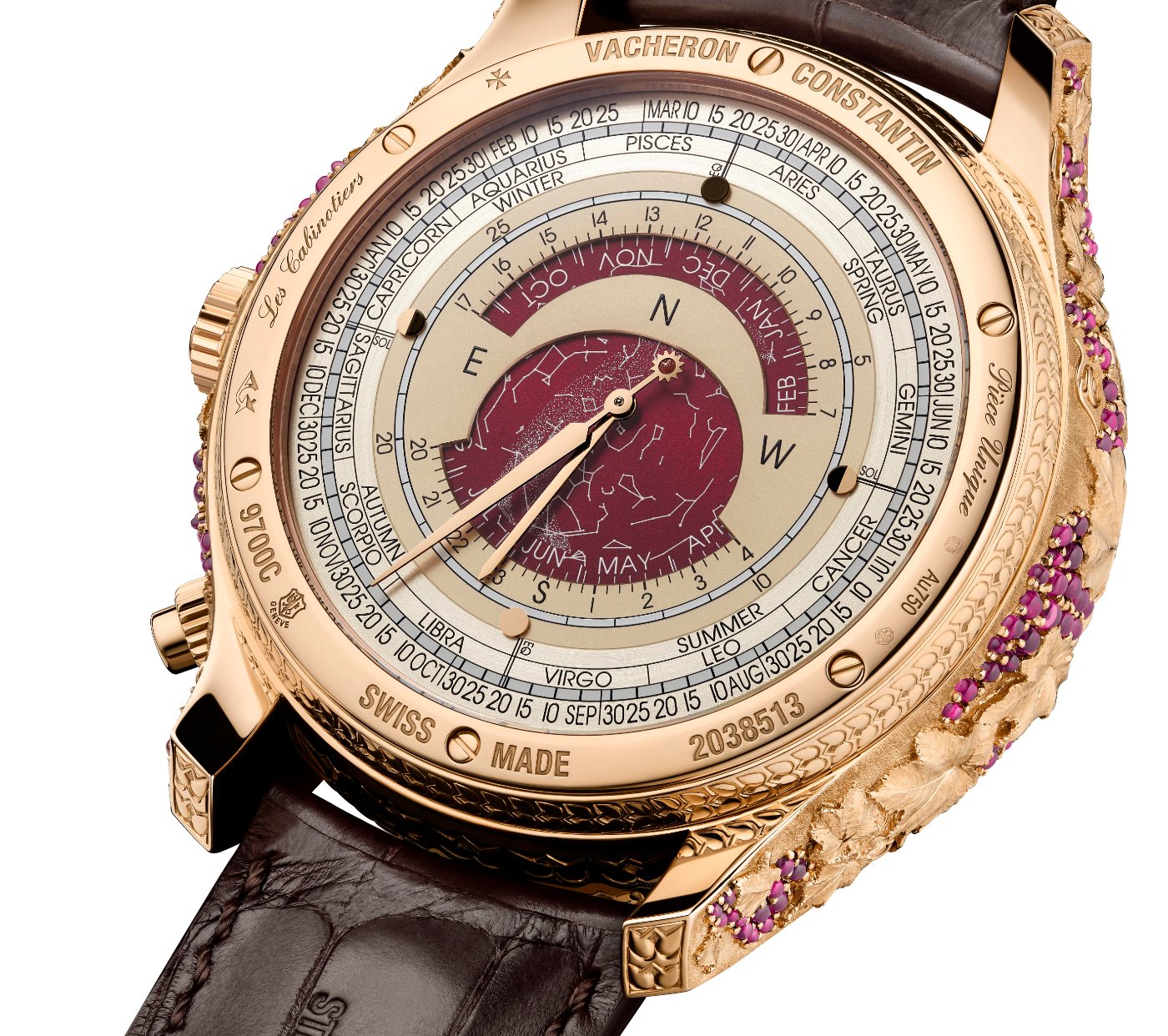 Once the bunches of grapes had been formed, the engraver took over the model to perform the finishing, while facing the added difficulty of having to work around the gem-set parts without touching them. The vine leaves were thus delicately modelled using the intaglio engraving technique that involve hollowing out the material and then polished.

And because every detail is important, the engraver took the trouble to dig slightly below the outline of each leaf so as to accentuate the 3D visual effect. This foliage thus emerges clearly against the case middle, especially as the base has been delicately chased. To achieve this sandblasted effect, the engraver hammers the surface point by point so as to enhance the contrast with the raised polished elements.

The case decoration continues on the bezel and case-back with a hand engraving depicting vine leaves. The difficulty implied by this intaglio engraving lies in the absence of a border or contour line. Hollowed out across the entire width of the bezel, the garland thus stands alone thanks to the metronomic regularity of the motif. This latter aspect is picked up on the two fastening options – folding clasp and pin buckle – accompanying the watch and which required a full week’s work in themselves.