The brand presents a new timepiece as a tribute to the “Outrenoir” work of major abstract artist Pierre Soulages. The result is astonishing.

The brand presents a new timepiece as a tribute to the “Outrenoir” work of major abstract artist Pierre Soulages. The result is astonishing.
I

n January 1979, the major abstract artist Pierre Soulages inaugurated a series of works at his Parisian workshop which he called Noir-Lumière. In 1989, the series became known as Outrenoir. The surface of each painting is coated with black paint in various states, textured into low relief with tools and brushes. Each Outrenoir painting plays on with the light that reveals its appearance to the viewer, particularly as the person moves. “When the light is more intensely reflected, the black appears less black, and its surface effects become more noticeable, more active,” asserted Soulages in 2007. Soulages’ black successively appears glossy or matte.

Musée Soulages in Rodez possesses a collection of the master’s works like none other. The painter was born in that city, on rue Combarel, in 1919; his father was an autobody craftsman. With support from Musée Soulages and the Association des Amis du Musée, the watchmaker Baume et Mercier approached Pierre Soulages with the project for a unique watch paying tribute to his work.

Indeed, his paintings constitute the meeting point of Baume & Mercier, Musée Soulages, and the Association des Amis du Musée Soulages. For Baume & Mercier, collaborating with Musée Soulages is a way to acknowledge how important art really is to the brand. This is more than a polite acknowledgment: it is a way of showing thanks for fulfilling our souls and the passage of time, inspiring us and thrilling us. Because Musée Soulages is a generous, bustling place that fosters conversation and is open to other artists. So why Soulages? Because his work continues to captivate as much as ever, even when it is not in view. His black galaxy asks questions, enchants, and baffles; shiny, matte, dusty, streaked, flat, smooth, polished or salient. 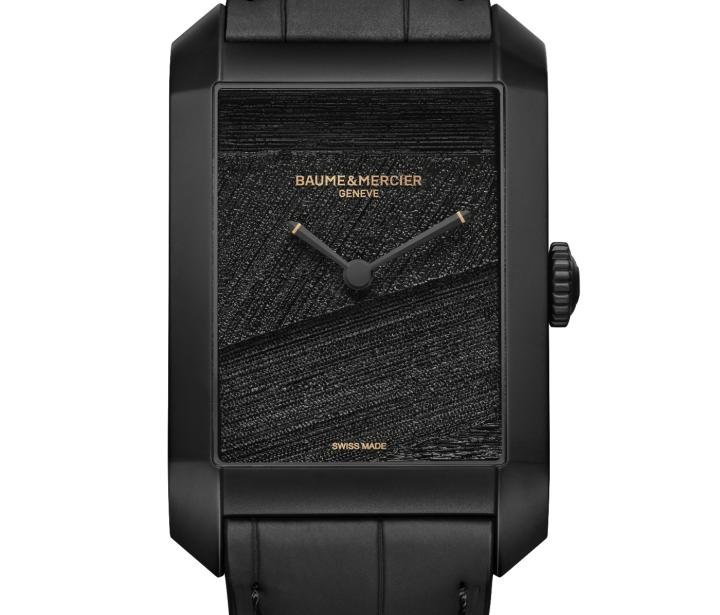 Liberally taking inspiration from an Outrenoir painting by Pierre Soulages to turn it into a watch creation is an idea based on admiration and recognition, but bringing it to life poses a technical challenge. One work in particular guided the experiment, the exceedingly elevated Peinture 390 x 130 cm 17 mars 2019. This work – which the Soulages couple donated to Musée Soulages in 2020 – celebrates the painter’s 100th birthday, a testimony to his vitality and inspiration.

The work guides the light through a play of overlapped panels of slanted streaks which sweep from one side of the composition to the other. The action painting technique that Soulages developed cuts into the black acrylic material to produce a variety of matte-and-shine effects. The light released by the painting is essential, in that it may also bear the full spectrum of colors. The challenge of the watch designer was to reflect the spirit and content of this work.

To this effect, the Baume & Mercier team took care to bring out contrasts in the way light reflects off the watch components. Each detail of the dial and case is eloquent, revealing the beauty of the timepiece. The finishes take on their full meaning, as pertinent on the watch as they are on a painting. As for the research into color – black –, the exploration of its intensity was a major pursuit. The pursuit a black so deep that it would have an effect on the emotions.

When Pierre Soulages talks about his engravings, and particularly his etchings, he speaks of capturing time in space. A painter’s time is an action held up to view, a single sweeping stroke. To create a timeless work: this, of course, the quest of any painter or watchmaker who endeavors to measure and contain the passage of time. Time has no hold on such a creation, whether it be a timepiece or painting; it stands the test of time without losing its beauty, strength and force of attraction. Both artist and watchmaker share the same desire to create a timeless piece.

Baume & Mercier chose the Hampton model for its transposition of an Outrenoir work into a timepiece. The iconic Hampton asserts a rectangular dial and case evoking the proportions of a canvas. Since its launch in 1994, the Hampton has represented the ultimate non-round watch. It is distinctive for its design, inherited from one of the House’s models dating from the 1960s that was in turn inspired by the Art Deco of the 1920s. The aesthetic approach to clean, curved lines and perfect proportion demonstrates the artistic sense that is so important to the House. Indeed, it is no coincidence that the model has taken the Greek letter Phi – a reference to the golden ratio – as its emblem. The formal minimalism and understatement of the Hampton “Hommage à Pierre Soulages” helps to showcase this tribute to Pierre Soulages’ artwork, while the restraint of the refined timepiece echoes the purity that characterizes his paintings.

Even the exclusive case in which the watch is presented pays tribute to the contemporary architecture of Musée Soulages, designed by the Catalan RCR Arquitectes who won the prestigious Pritzker Architecture Prize in 2017. The cladding of the building is made up of Corten steel, which has an appearance of iridescent rust. Here, again, is the question of time and the patina that it creates. The timepiece will be accompanied by a leaflet telling details of the collaboration and a VIP pass for two for the Musée Soulages in Rodez. A book on the work of Pierre Soulages will also be sent to each owner of a Hampton “Hommage à Pierre Soulages”. 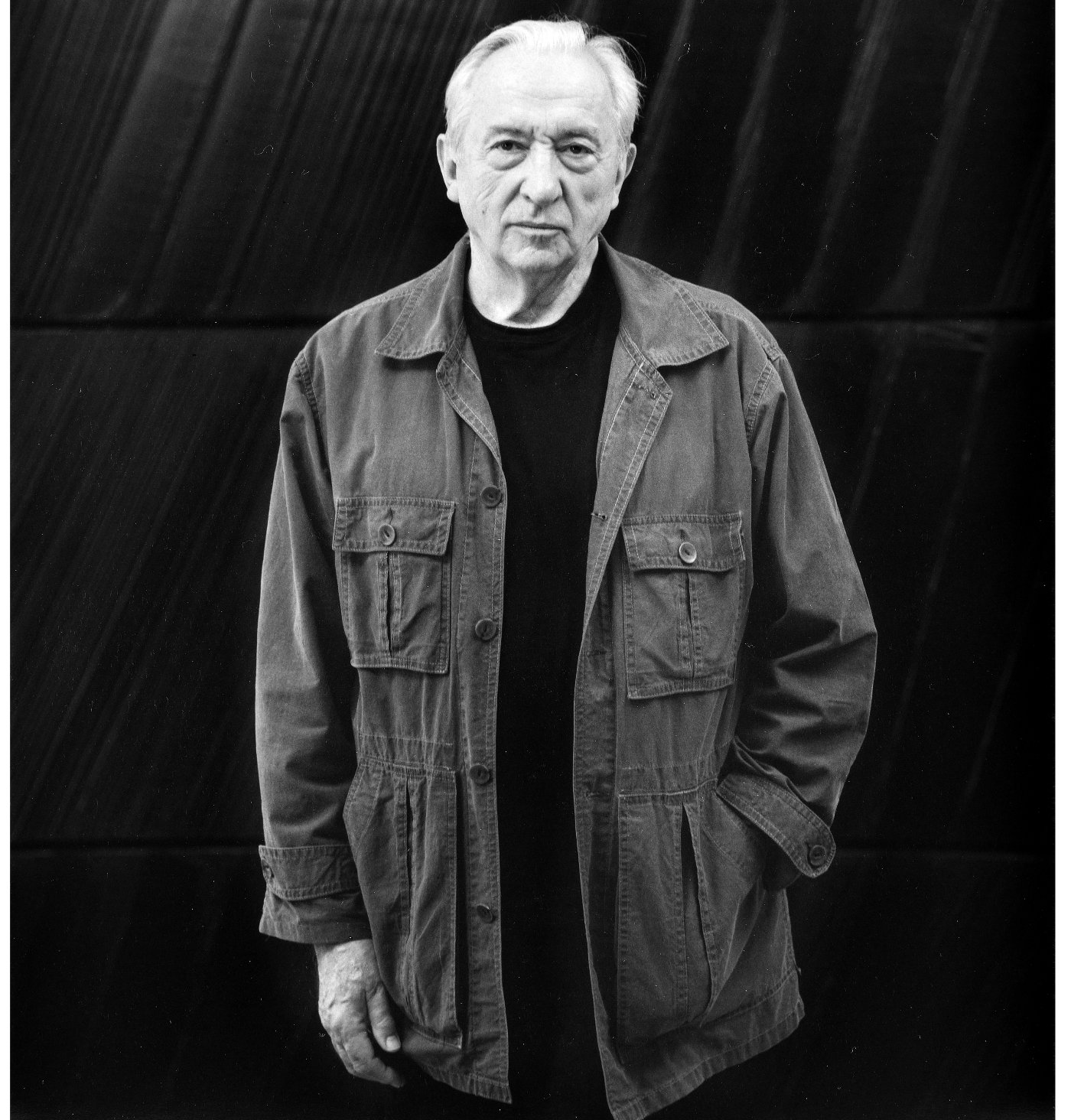 In the exciting, innovative interaction between art and watchmaking, technical achievement is the keystone of the Hampton “Hommage à Pierre Soulages.” A watch dial miniaturization is a fascinating interpretation of a large-scale painting. Shrinking meters down into millimeters is a thrilling transformation.

Baume & Mercier makes use of new 3D printing technologies for this achievement. The preparatory work was an adventure of great consideration, trial-and-error, and finally success. Through a meticulous topography, advanced research and 3D wax printing, the ideal procedure was finally found: one that would liberate the volumes, reveal the details and bring out the beauty of this work in a continual interaction between shade and light. For the dial, brass machined with a laser was found to suitably meet this challenge. Candia stone is used to create a diffuse matte effect, and an electroplating process is then applied to coat it with color through electrolysis to a thickness of 0.2 microns. One last coat of sheer, semi-matte protective lacquer to a thickness of 10 microns, and the piece is finished: black yet wreathed in light, filled with masterful contrasts.

The faceted brass “glaive” hands are diamond-ground, sand-blasted, and then coated with black PVD. A touch of gold is added to the end of each one on request by Pierre Soulages in order to elegantly emphasize the passage of time. The case, sculpted in a stainless steel block, is sand-blasted and then coated with hydrogenated amorphous carbon ions through plasma-assisted chemical vapor deposition (PACVD) to a thickness of 2 microns, providing a hardness of 6,000 Vickers. Each material and finish is more ingenious than the last, capturing and sculpting the light, borrowing from the artist’s strokes to bring movement to the shapes and rhythm to the material. The self-winding mechanical Swiss caliber (ETA 2892) features a black oscillating weight adorned with a “Côtes de Genève” that can be seen through the transparent watch back. The back bears a “Hommage à Mr Soulages” engraving. “Baume & Mercier” appears as a metallic engraving on the underside of the domed sapphire crystal. Both sides of the crystal feature an anti-glare treatment to ensure that the image of the painting remains perfectly intact.

To intensify the chromatic depth of the watch, it comes complete with a built-in interchangeable strap in black leather with square scales and a nubuck finish that fastens with a pin buckle in DLC steel. This unique timepiece, of an exceptional technical and aesthetic complexity, offers a harmonious play on contrasting blacks through subtle nuances of mattes, semi-mattes, shine and diffuse layers, in keeping with the spirit of Pierre Soulages’ work. The strength of black is majestically represented in this tribute to the paintings of one of the most fascinating artists of the 20th and 21st centuries.

The “Hampton Hommage à Pierre Soulages” will be produced on demand in an edition limited to 102 (reflecting the age of the artist) individually numbered watches. Through this partnership, Baume & Mercier will contribute to assisting Musée Soulages in enriching the collections presented there. The association Les Amis du Musée Soulages will guide collectors of the watch in their discovery of Musée Soulages.