This 39 mm stainless steel anniversary model, measuring 8.1 mm in thickness, represents the first “Jumbo” in history to be equipped with a selfwinding flying tourbillon.

This 39 mm stainless steel anniversary model, measuring 8.1 mm in thickness, represents the first “Jumbo” in history to be equipped with a selfwinding flying tourbillon.
A

udemars Piguet unveils its latest research and development breakthrough (RD#3) with the Royal Oak Selfwinding Flying Tourbillon Extra-Thin. This 39 mm stainless steel anniversary model, measuring 8.1 mm in thickness, represents the first “Jumbo” in history to be equipped with a selfwinding flying tourbillon. It is powered by the Manufacture’s new selfwinding ultra-thin flying tourbillon movement, Calibre 2968, measuring just 3.4 mm thick and adorned with a novel combination of traditional and contemporary hand-crafted decorations. Audemars Piguet’s watchmakers have met several technical challenges to bring this timepiece to life, while devoting particular attention to aesthetic details. Pushing the boundaries of feasibility, this model will be complemented in September by a second 37 mm version for the slimmer wrists, enriched with a dial of a different hue.

At the heart of this new innovation is Calibre 2968, an ultra-thin selfwinding flying tourbillon movement that was developed over a five-year period. Audemars Piguet’s engineers and watchmakers took on numerous challenges in order to accommodate this complication – previously reserved for 41 mm diameters – into the smaller volume of a “Jumbo:” a first for the Manufacture and one of the rare examples in the watch industry as a whole. Given the extra-thin nature of the form language, this selfwinding flying tourbillon had to be creatively rethought to reduce the thickness required to house this complication by repositioning certain components. The tourbillon cage, which is crafted in titanium, is notably equipped for the first time with a peripheral drive. The combination of these two elements not only makes the distribution of energy to the tourbillon more fluid, but also served to lighten and refine this regulating organ.

In order to provide optimum visibility of the tourbillon and the movement, Audemars Piguet engineers completely redesigned the architecture of the mechanism. The Royal Oak Selfwinding Flying Tourbillon Extra-Thin features a new escapement to accentuate the aesthetic details while revealing part of the movement’s workings. The geometry and positioning of the balance wheel arms have notably been revised in such a way as to make the watch’s beating heart even more perceptible. The technical design of the movement results in the flying tourbillon being placed at the dial level, for a greater visual experience.

The hand decoration of the movement components, visible through the sapphire caseback, combines the dynamism and classicism of V-angles with the modernity of traits tirés – a finish that appears on the mainplate and bridges and replaces the traditional Côtes de Genève. The openworked, rhodium-toned bridges offer an unobstructed view, contrasting with the pink-gold-toned colour of certain mechanism elements. 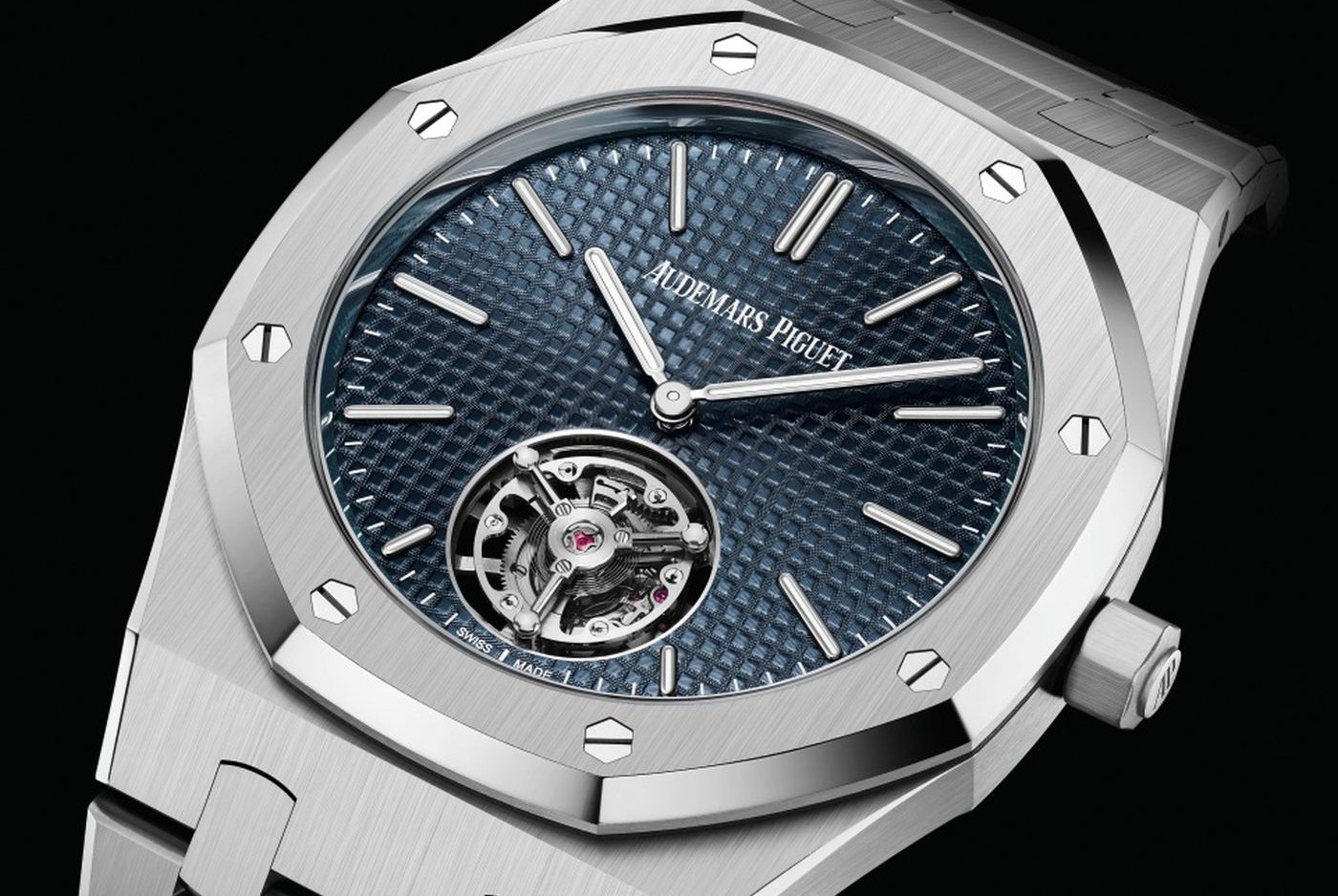 “The Royal Oak continues to evolve and cut through the timeline 50 years after its creation and will do so for the next 50 years and beyond. It remains a platform for both technical and aesthetic development, as demonstrated by the new ultra-thin flying tourbillon making its debut on both the classic 39 mm and the celebrated 37 mm Royal Oak models. The movement architecture was designed to offer a unique view of the smaller cage while showcasing an engaging contrast of hand-finishing techniques throughout,” said Michael Friedman, Head of Complications

The new RD#3 remains true to the aesthetic codes of the iconic “Jumbo” models. The stainless steel case and bracelet feature the collection’s signature satin-brushed and polished hand finishes, while the timepiece is graced with a Bleu Nuit, Nuage 50 Petite Tapisserie dial which pays tribute to the original model. The colour is obtained using a PVD (Physical Vapor Deposition) process that guarantees a uniform and lasting tone across all the dials.

Just as on the 1972 model, this new “Jumbo” reference is distinguished by bathtub-shaped hour-markers and hands filled with luminescent material to ensure optimal readability in the dark. The Audemars Piguet signature, like the minute track, is printed in white on the Tapisserie motif. The titanium flying tourbillon cage rotating at 6 o’clock stands out against the blue Tapisserie backdrop to create an airy effect.

Contrary to the original model, the contemporary version is endowed with a sapphire caseback, which reveals the new ultra-thin movement and the dedicated oscillating weight.

The Royal Oak Selfwinding Flying Tourbillon Extra-Thin features a central oscillating weight mounted on ball bearings and equipped with two reversers that ensure bidirectional winding. The timepiece is fitted with the dedicated anniversary openworked oscillating weight in rhodium-toned 22-carat pink gold, which bears the “50-years” logo and the Audemars Piguet signature engraved on its surface. Matching the tones of the stainless steel case and bracelet, it is also adorned with the collection’s trademark polished and satin-brushed finishes.

In 1986, Audemars Piguet introduced the world’s first selfwinding tourbillon wristwatch. Imagined by Jacqueline Dimier, the design placed the tourbillon escapement on the dial side for the very first time. Calibre 2870 is housed in an ultra-thin case measuring a mere 5.3 mm thick. Its titanium tourbillon cage remains one of the smallest in the world today with a diameter of 7.2 mm, as well as one of the lightest with a weight of only 0.123 grams. This model became known as the Tourbillon Selfwinding Ra (in reference to the Egyptian sun god) because Jacqueline Dimier’s design gave the tiny regulator the appearance of a sun, with its rays spreading across the dial. This complicated wristwatch, of which 401 were produced until 1992, opened up a new avenue for Haute Horlogerie, which began to see a comeback of prestigious mechanisms including tourbillon watches. 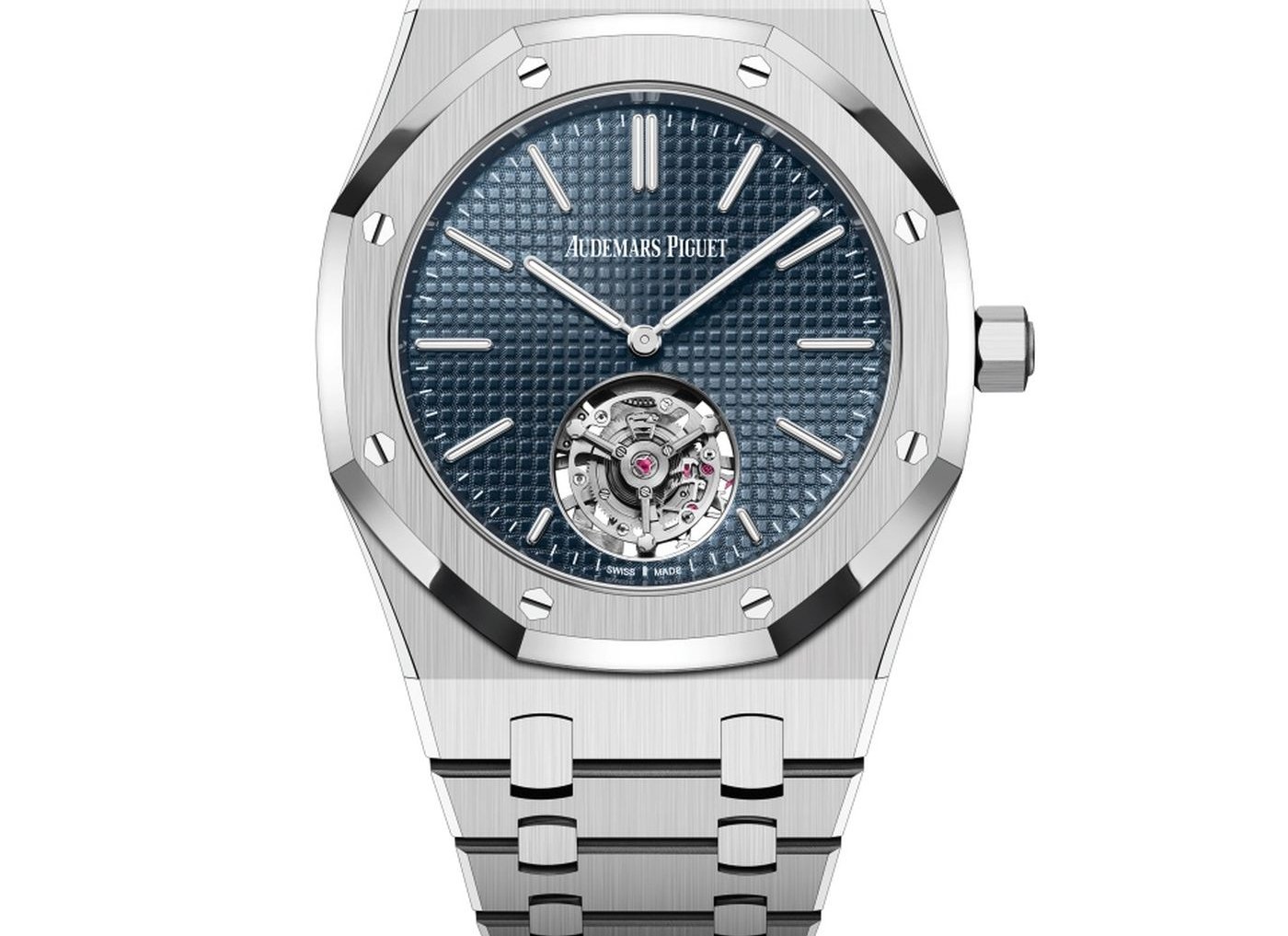 Thirty years after Jacqueline Dimier’s model, the Manufacture, known for its ability to innovate, launched a series of Research and Development models. In 2015, Audemars Piguet revealed its first RD#1 Royal Oak Concept Minute Repeater Supersonnerie prototype at SIHH, after eight years of research in partnership with EPFL, the Swiss Federal Institute of Technology Lausanne and a panel of experts composed of watchmakers, engineers, musicians and sound specialists. This watch marked a significant step forward in terms of acoustic performance, sound amplification and sonic beauty, with the launch of the Supersonnerie mechanism. This system, for which three patents were filed, combines a novel chiming mechanism with an innovative case construction. The commercial Royal Oak Concept Minute Repeater Supersonnerie version, which followed one year later, won the “Mechanical Exception Watch Prize” at the 2016 Grand Prix d’Horlogerie de Genève.

In 2019, Audemars Piguet unveiled a new innovation with its 41 mm Royal Oak Selfwinding Perpetual Calendar Ultra-Thin, whose prototype was presented a year earlier at SIHH under the name RD#2. This 6.3 mm-thick calendar watch houses a movement that is only 2.89 mm thick, making it the world’s thinnest automatic calendar wristwatch of its time. To achieve this feat, the calendar functions usually mounted on three levels were brought together on a single plane. The experts at the Manufacture also developed two patented innovations relating to the integration of the end-of-month cam with the date wheel and the association of the month cam with the month wheel. Marking a turning point in the history of complication watches, the Royal Oak Selfwinding Perpetual Calendar Ultra-Thin earned Audemars Piguet the “Aiguille d’Or” award at the Grand Prix d’Horlogerie de Genève in November 2019.

This year, the Manufacture’s latest technical advance, the Royal Oak Selfwinding Flying Tourbillon Extra-Thin, follows in the footsteps of previous innovations. This RD#3 timepiece, powered by the new Calibre 2968, combines technical innovation and aesthetic refinement to pay a fine tribute to the Royal Oak’s 50th anniversary. 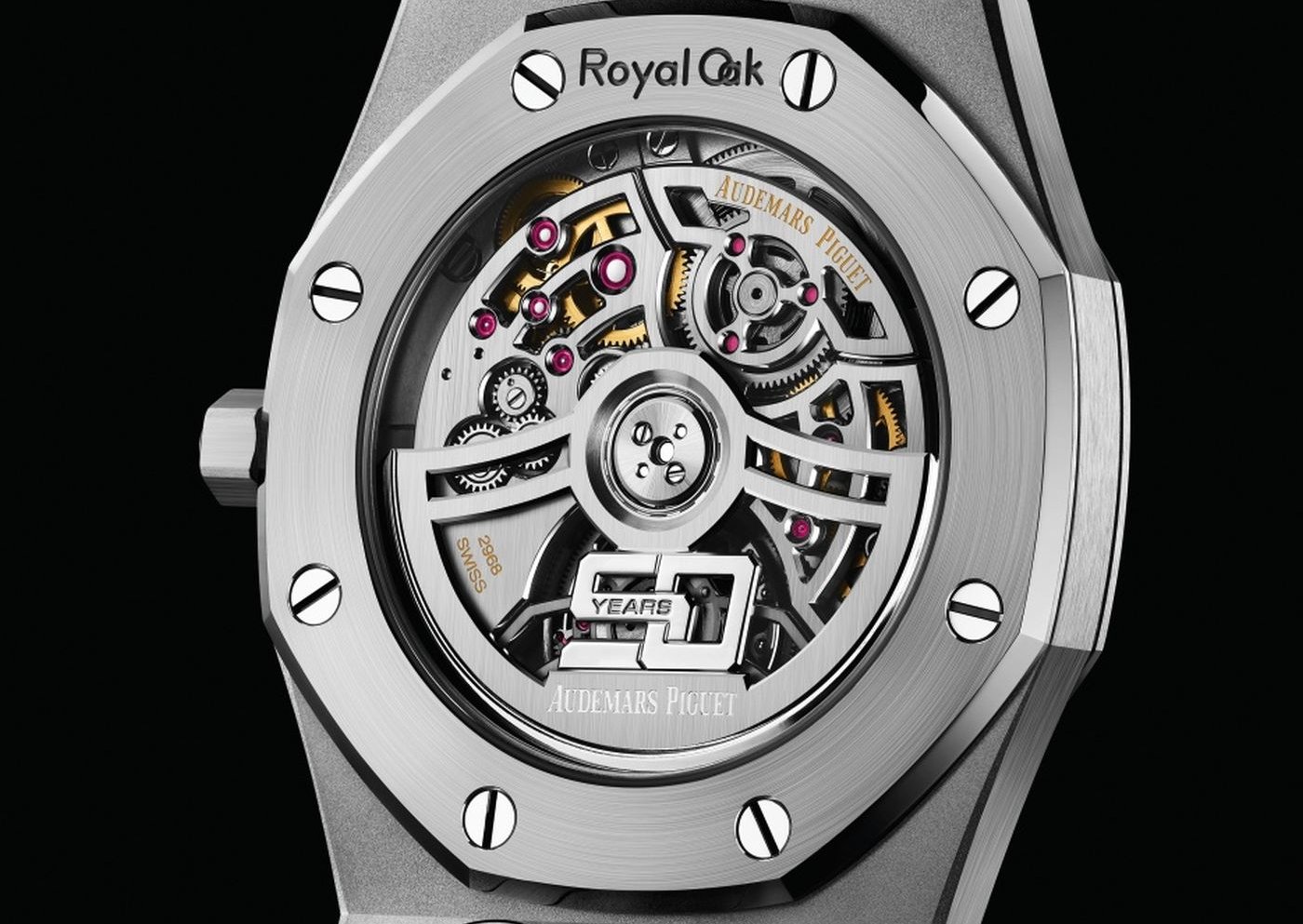