The XRby brand concept highlights crafts such as engraving, crimping, or enamelling. The third collection was born from an encounter between founder Xavier Rousset and Geneva-based enamel artist Gabriel Colliard.

The XRby brand concept highlights crafts such as engraving, crimping, or enamelling. The third collection was born from an encounter between founder Xavier Rousset and Geneva-based enamel artist Gabriel Colliard.
I

n 2020, Xavier Rousset launched the XRby concept with the intent to give more exposure to arts and crafts, such as engraving, crimping, enamelling, and to re-establish their prestige. Through a series of encounters, the dial of XRby watches becomes a “business card” for the artist that designs and realises it. The third collection was born from an encounter with Geneva enamel artist Gabriel Colliard, whose creativity and dexterity have impressed Xavier Rousset.

Swiss artist Gabriel Colliard was born in Argentina. Just like his quest for irreproachable technicity, the optimism, the passion, and the creativity that come from his rich and colourful culture truly reflect in the practice of his art and are as warm as a rhythm of tango. With more than ten years of experience in luxury watchmaking, this talented enameller has sought excellence throughout his career by collaborating with great names of watchmaking such as Patek Philippe and Rolex.

Cloisonné, painted, champlevé, and paillonné: Gabriel Colliard has mastered all facets of fine enamelling. He excels in the art of miniature painting on Grand Feu enamel, using the renown "Geneva technique”, and gives great importance to the finishing of his pieces, which he reworks on to add substance and depth to his design by having both matt and polished effects on the surface of the dial. 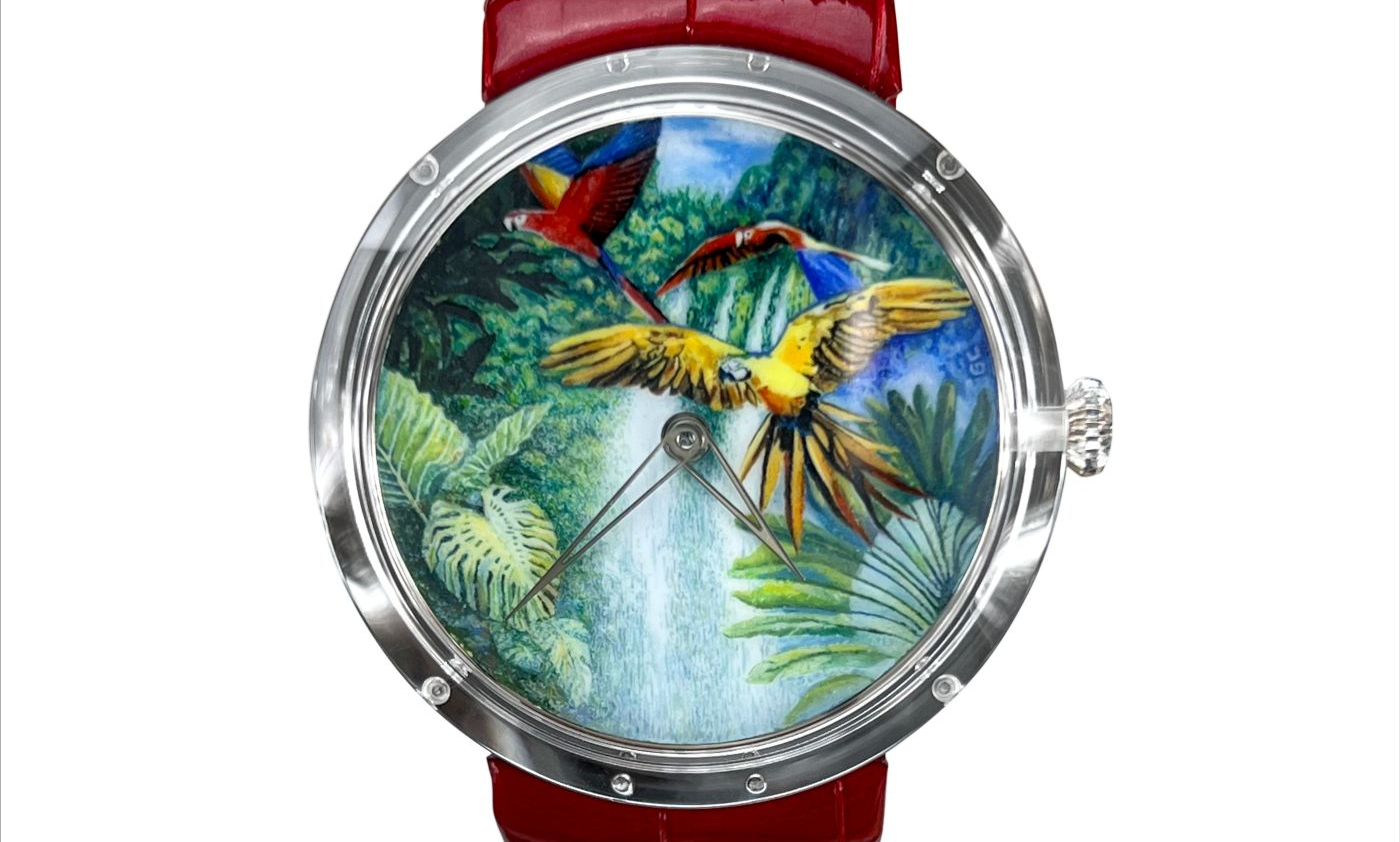 It takes more than rigour and technicality to be able to master such a multifaceted discipline. Just like a tango dancer, an enamel artisan must also have a very sharp artistic sense, and Gabriel Colliard has it all: beyond his undeniable artistic sensibility, it is his innovative approach – composing new shades and discovering new subtle colour effects - that convinced Xavier Rousset.

Enamel has been associated with jewellery and goldsmithing since Antiquity. It is quite natural that it eventually started being used in the decoration of watches during the Renaissance. Grand Feu enamel is without a doubt the most challenging decoration technique for watches, but it is also the one that allows to realize the most inalterable and refined decorations.

By manufacturing a timepiece that reflects the greatness of the Grand Feu enamel “Geneva technique” completed by a Genevan artist, this third collection of XRby* genuinely puts the spotlights on the Swiss cradle of fine watchmaking. Miniature painting on enamel was first introduced in the 16th Century. This technique is comparable to oil painting: once mixed with essential oil, enamel powder forms an oily paste that will be applied with a brush on a white opaque enamel base.

The first step consists in drawing the outlines. Then the colouring process begins: the layering is punctuated by a series of firings (of 800 to 900 degrees) that amplify the different colours. The most tender colours are applied during the last firing. This step is crucial because an excess of heat can irremediably erase all or part of the work. All the delicacy and the time put in the work are therefore subject to the hazards of fire. 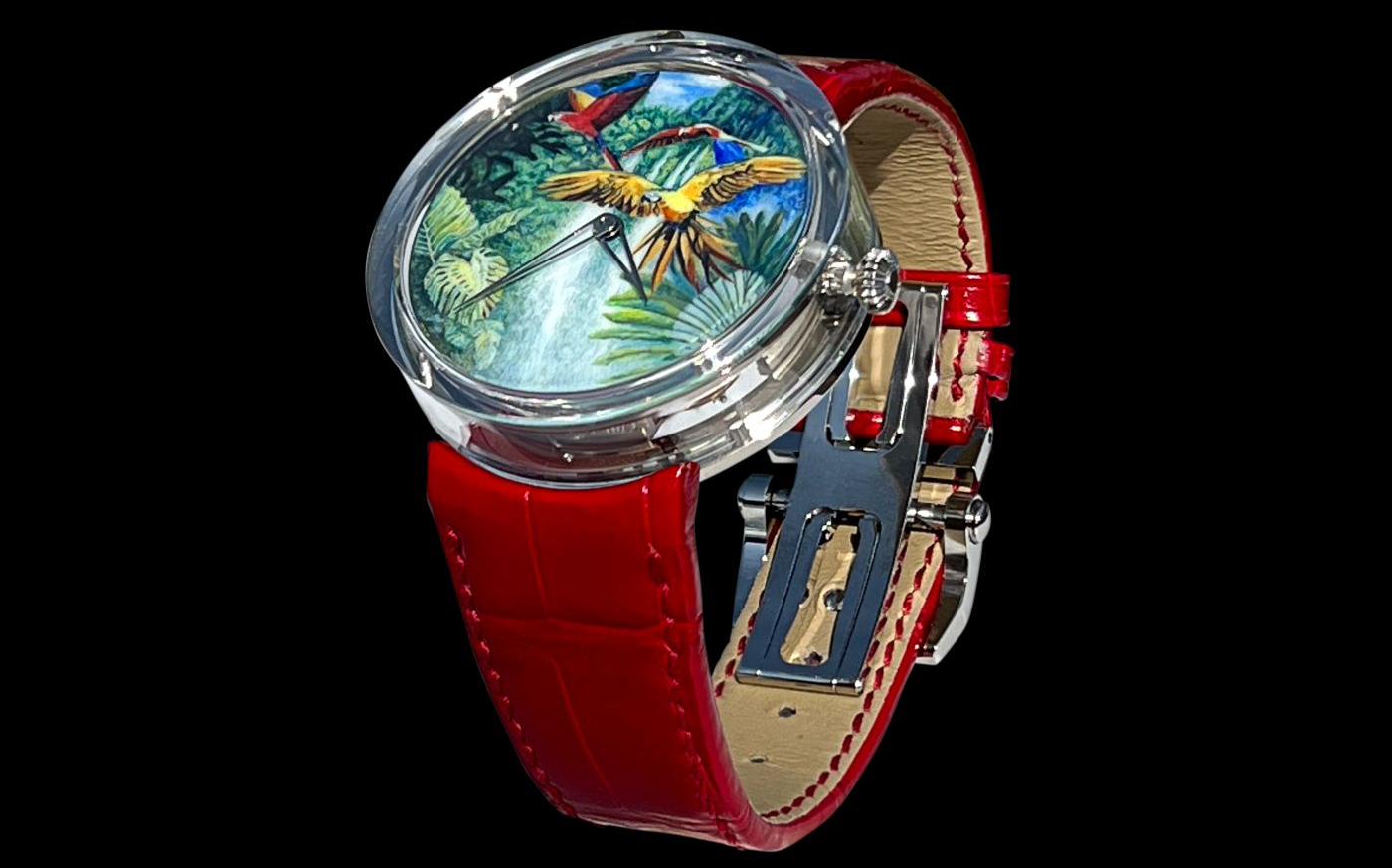 The artist himself does not discover the final result of his work until the end of this long process. Stubbornness and humility are thus constitutional of this savoir-faire. Reddened by the heat and blackened by the firing, it is only once cooled that the piece will reveal the subtlety of its colours. The particularity of the Grand Feu enamel “Geneva technique” is that a layer of transparent enamel - called “fondant” - is added on the surface of the dial to embellish and to protect the miniature painting.

This special approach on enamelling pays tribute to another talented Genevan artist called Jean Petitot, who developed this technique of excellence in the 16th century, making enamel painting shine around the world, from the whole of Europe to Persia, to China, and to America.

The figures speak for themselves: more than 125 hours of meticulous work and 20 firings were necessary to give birth to this incredible piece of 40 different colours. This work of art is magnified by an equally fine pedestal: a Swiss manufactured automatic movement with micro-rotor and a power reserve of 86 hours.

The theme of this miniature painting on enamel is the result of research work and a careful observation of the treasures that can be found in nature. It also has great meaningful value. The pandemic phase that obscured the world for nearly two years prompted Gabriel Colliard to dream about the blue sky and the singing of birds. He decided to paint two shimmering macaws (parrots) standing out against a lush green background of exotic foliage and the watery blue of a waterfall.

Macaws live in the tropical forests of Central and South America. Besides the beauty of their plumage, these birds are known for their capacity to mimic what they hear and have held high symbolic value in the Mayan culture, as they had an emblematic meaning linked to fire, to the sun and to energy. So many symbols that also evoke promise and hope.

Before being immortalized on a dial, these two macaws were chosen from 17 different species that are today threatened in the same way as the ecosystem they live in. After having disappeared from the sky of North-Western Argentina for more than 100 years, red macaws were seen flying across the country in 2020. Could that be a happy omen?

It has been observed that macaws stick to their mate throughout their life. The flight of this colourful duo is therefore also a symbol of lasting love and devotion, and of the victory of community over individuality. There are works of art that are worth a hundred pleadings to express the emotion and the hope that come with one’s return to life.