An introduction to Grönefeld’s first chronograph


While Bart and Tim Grönefeld, ‘The Horological Brothers’, have produced a number of different watches endowed with a variety of complications, they had never made a chronograph… until now. The 1941 Grönograaf is the latest creation to be conceived in Oldenzaal. It is a classical chronograph, but consistent with the Grönefeld ethos, it incorporates several ingenious details.

An introduction to Grönefeld’s first chronograph 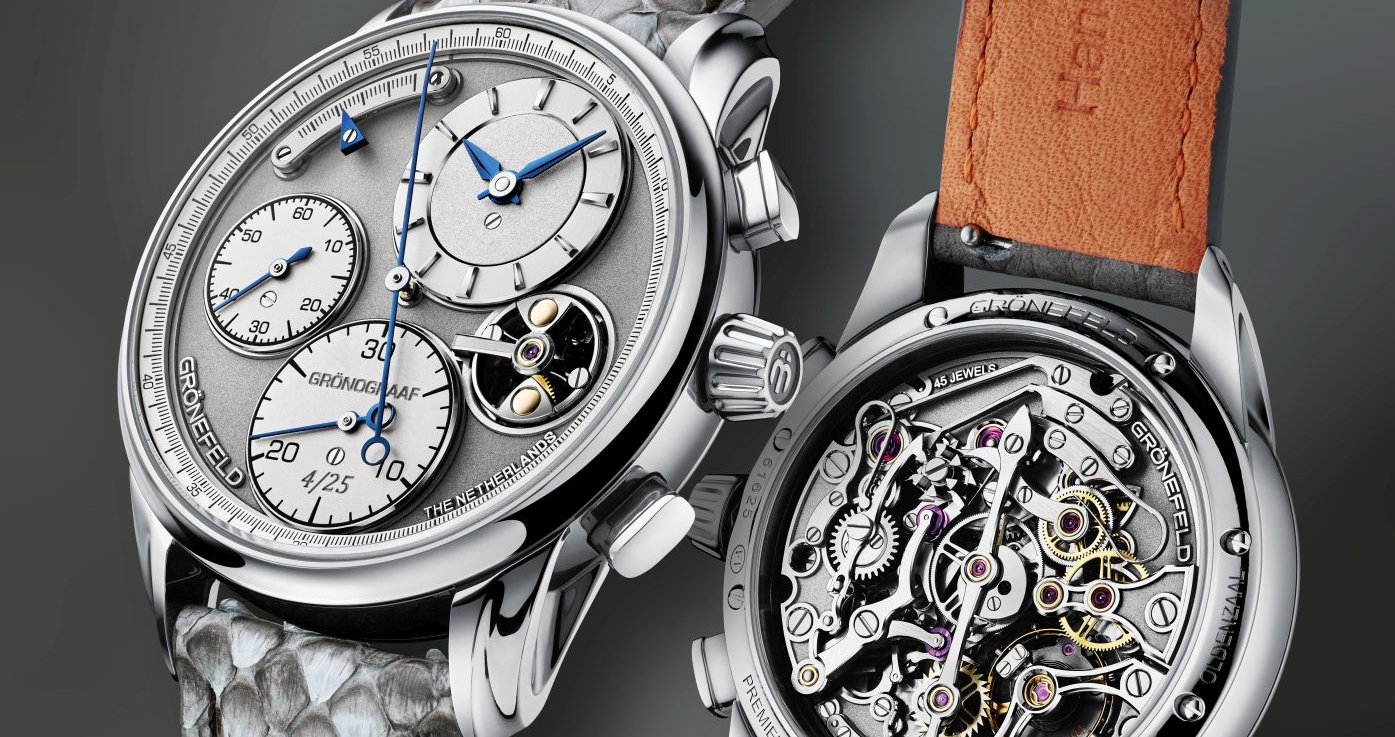 While Bart and Tim Grönefeld, ‘The Horological Brothers’, have produced a number of different watches endowed with a variety of complications, they had never made a chronograph… until now. The 1941 Grönograaf is the latest creation to be conceived in Oldenzaal. It is a classical chronograph, but consistent with the Grönefeld ethos, it incorporates several ingenious details.
I

t was perhaps inevitable that Bart Grönefeld would follow in the footsteps of his forefathers and become a watchmaker. Having completed his studies at the technical school in his home town of Oldenzaal, Bart enrolled at the school for watch technicians in Rotterdam.

Since 2008, Bart and Tim, ‘The Horological Brothers’, have produced a variety of unique mechanisms including a tourbillon minute repeater, a jumping seconds, a flying tourbillon with hacking seconds, etc… Their own unique take on classical watchmaking led to them winning two prestigious GPHG prizes: ‘Best Tourbillon’ for the Parallax model in 2014 and the ‘Best Men’s Watch’ for the 1941 Remontoire in 2016.

However, while both brothers have produced a number of different watches endowed with a variety of complications, they had never made a chronograph… until now. The 1941 Grönograaf is the latest creation to be conceived in Oldenzaal. It is a classical chronograph, but consistent with the Grönefeld ethos, it incorporates several ingenious details.

Unlike mass-produced cam-actuated chronographs, the 1941 Grönograaf features a classical configuration, namely a column-wheel and lateral coupling, a combination synonymous with high-end watchmaking. The calibre G-04 is a symphony of 408 parts and a wonderful exemplar of no-compromise watchmaking. 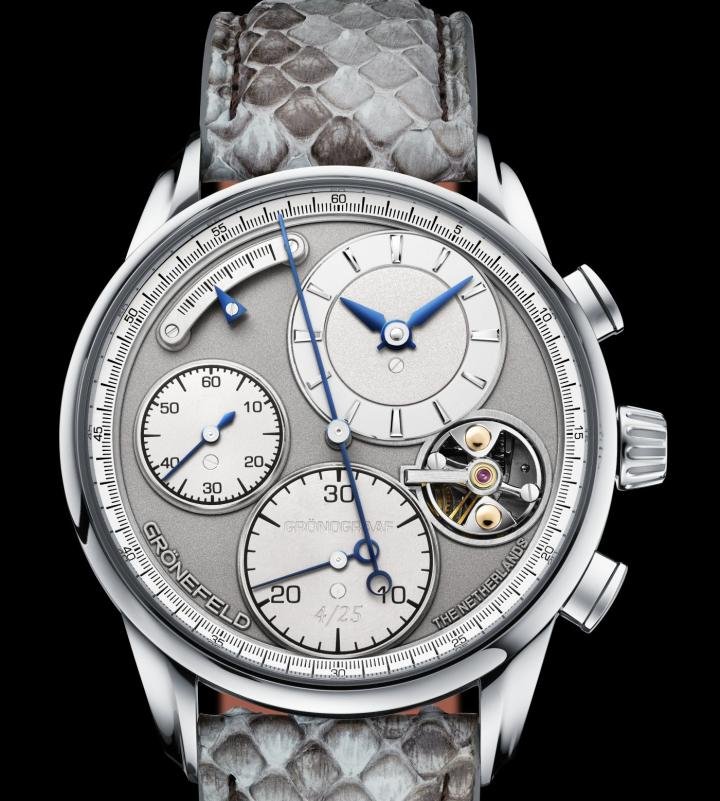 Mindful that chronograph movements are often subject to harsh forces that can sometimes scar hammers and bend hands, The Horological Brothers conceived a less aggressive system, a ‘soft reset’ mechanism. A centrifugal governor, positioned at 4 o’clock, typically seen on minute repeaters, slows down the reset function, thereby proving kinder to components while delivering a fascinating spectacle in the process.

The governor includes two solid gold weights. Depending on the position of the heart-shaped cams for the counter hands, the relevant minutes and seconds hands rotate clockwise or counter clockwise, heightening the sense of mechanical theatre. The 30-minute counter, located at 6 o’clock, features an instantaneous jumping minutes’. 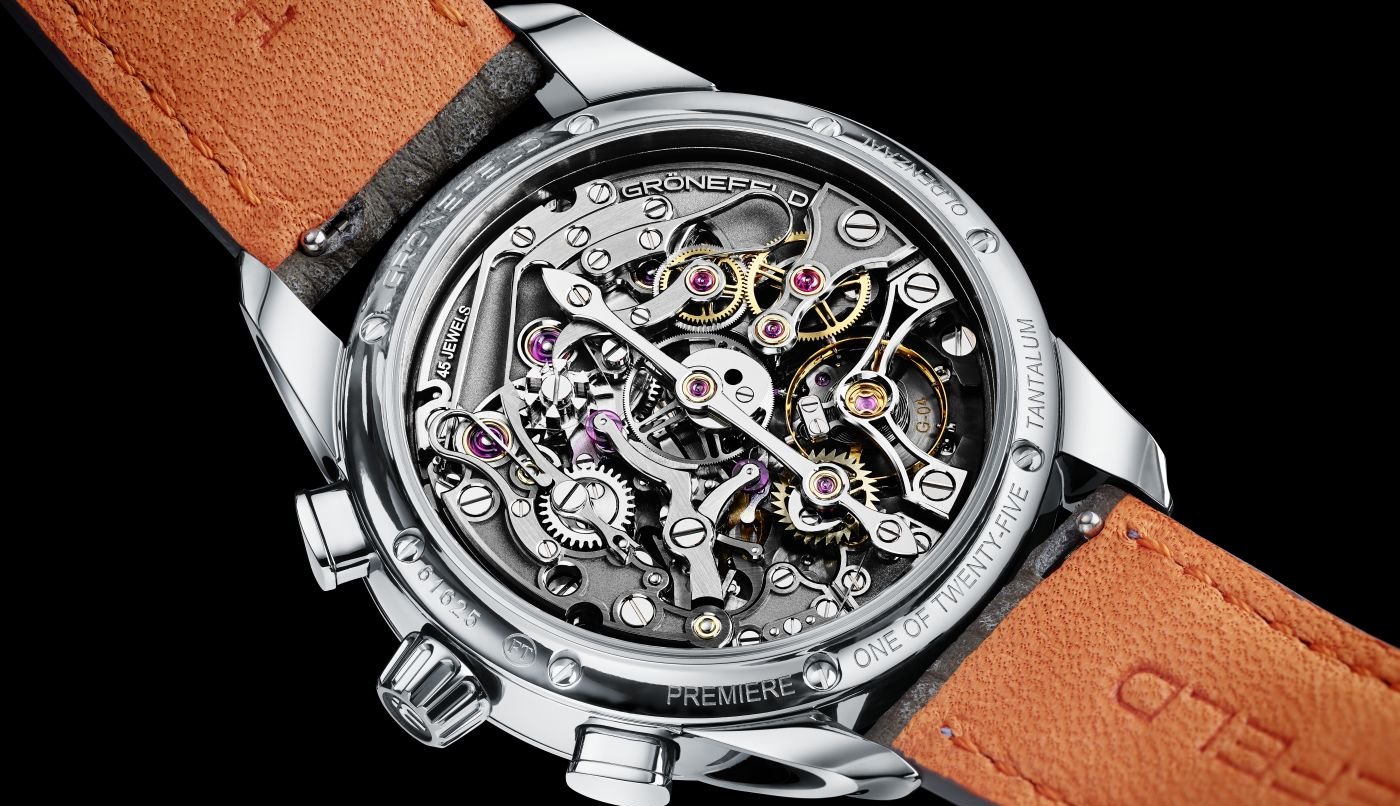 The mainplate is embellished with spotting, while the bridges are formed of stainless steel, polished by hand. Moreover, the bridges have micro-blasted centres, circular graining on the top and feature various engravings in relief. The heart-shaped cams, the elongated chronograph bridge, the gold chatons and the screw-heads are embellished with black polishing, performed in the traditional way using diamond paste on a tin plate. Consistent with earlier Grönefeld watches, the finishing is worthy of the term ‘Haute Horlogerie’. Indeed, everything is reassuringly Grönefeld.

In 2016, Bart and Tim released the 1941 Remontoire, honouring their father, Sjef, by referencing the year of his birth. The 1941 case, measuring 39.5mm, was subsequently used for the Principia automatic and the Decennium Tourbillon and has won favour with many watch collectors.

The sinuously shaped 1941 returns, albeit it is a smidgen larger, measuring 40mm in diameter. However, most notably, the case for the inaugural models, a limited edition of 25 pieces, is formed of the rare metal, tantalum. This material is hard, corrosion resistant, bioinert and exhibits a lustrous, blue-grey gleam. Tantalum is more than twice as dense as stainless steel, heavier than palladium and slightly lighter than gold.

The hours and minutes are shown on an off-centre dial, a detail that first appeared on the 1896 One Hertz and later on the Parallax tourbillon. The time is expressed with Lancette hands and the hours are denoted with crisp, trapezoidal indexes. The hands are flame-blued steel, upholding watchmaking tradition, while the centres are mirror polished.

As stated earlier, the centrifugal governor sits at 4 o’clock. When the reset to zero pusher is pressed, the governor bursts into life, not only serving a functional role but delivering a wonderful animated performance.

A 30-minute counter, located at the base of the dial, features a Breguet-style hand. The instantaneous jumping minutes facilitates ease of read-off. A subsidiary seconds display resides at 9 o’clock, while a power reserve indicator, positioned above, is equipped with a pointer, seemingly floating adjacent a track, conveying the status of the mainspring.

The central chronograph seconds hand subscribes to the classical Breguet-style and converses with a crisply-marked track positioned on the rehaut, proclaiming the elapsed seconds in an intelligible format.

The ‘Premiere Edition’ of the 1941 Grönograaf will be encased in tantalum and limited to just 25 pieces. Thereafter, Grönefeld will release 188 pieces in stainless steel. 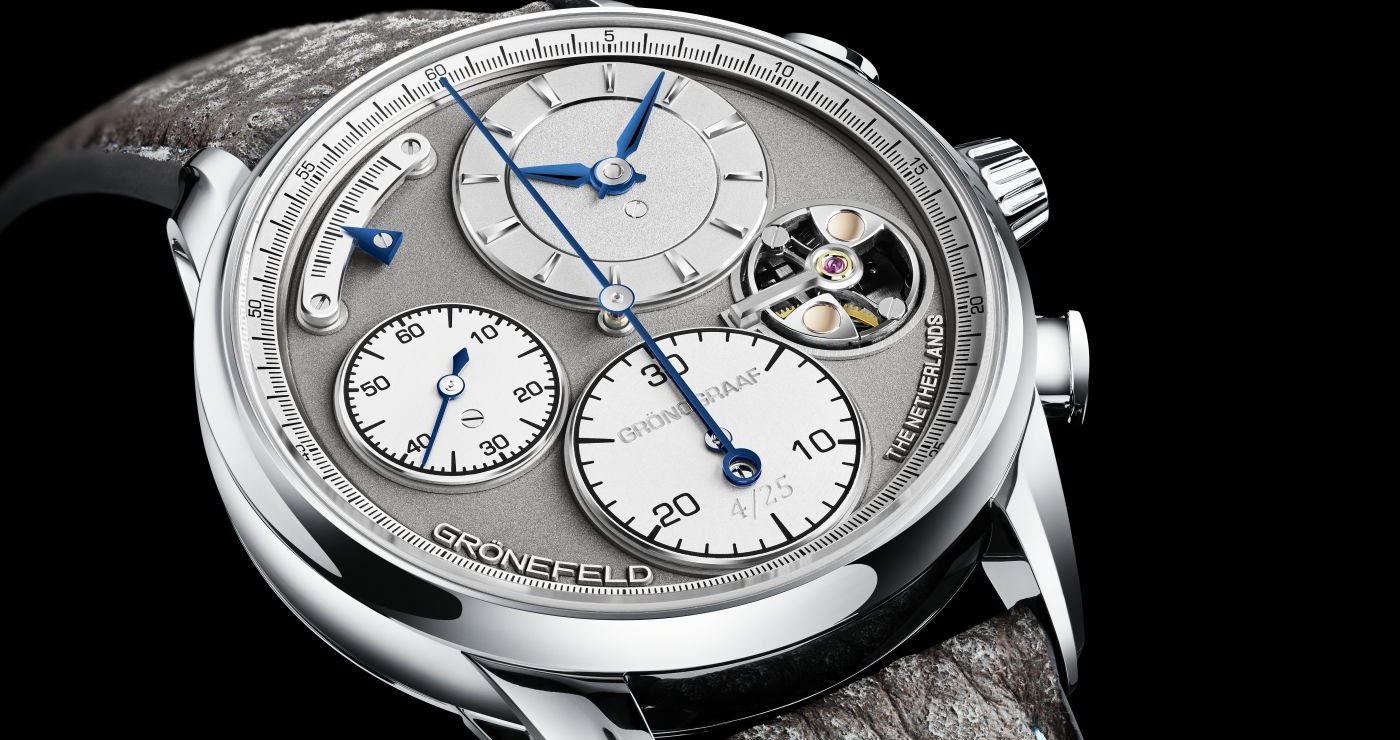