Six decades after the birth of the watch that defined the codes of the chronograph, the brand presents an anniversary model in a limited edition of 600 pieces, inspired by a piece that is dear to collectors. To kick off a full year of festivities for the 60th anniversary of the model, TAG Heuer teams chose to return to one of the most prized vintage Carrera watches, the 2447 SN reference from the late 1960s.

Six decades after the birth of the watch that defined the codes of the chronograph, the brand presents an anniversary model in a limited edition of 600 pieces, inspired by a piece that is dear to collectors. To kick off a full year of festivities for the 60th anniversary of the model, TAG Heuer teams chose to return to one of the most prized vintage Carrera watches, the 2447 SN reference from the late 1960s.
D

uring the LVMH Watch Week in Singapore, TAG Heuer unveiled the Carrera Chronograph 60th Anniversary. The 600-piece edition watch has a ‘panda’ dial and becomes the curtain-raiser to the 60th Anniversary of Jack Heuer’s timeless creation, the Carrera.

Introduced in 1963, the Carrera has defined the wristwatch chronograph genre for six decades and is now recognised around the world for its classic, elegant profile, ultra-legible dial, and utterly dependable engineering. It has been worn by legends of motor sport and stars of the silver screen, from the likes of James Hunt in the 1960s, to Mick Jagger in the 1970s, and on to Ryan Gosling today. It is an icon among icons. 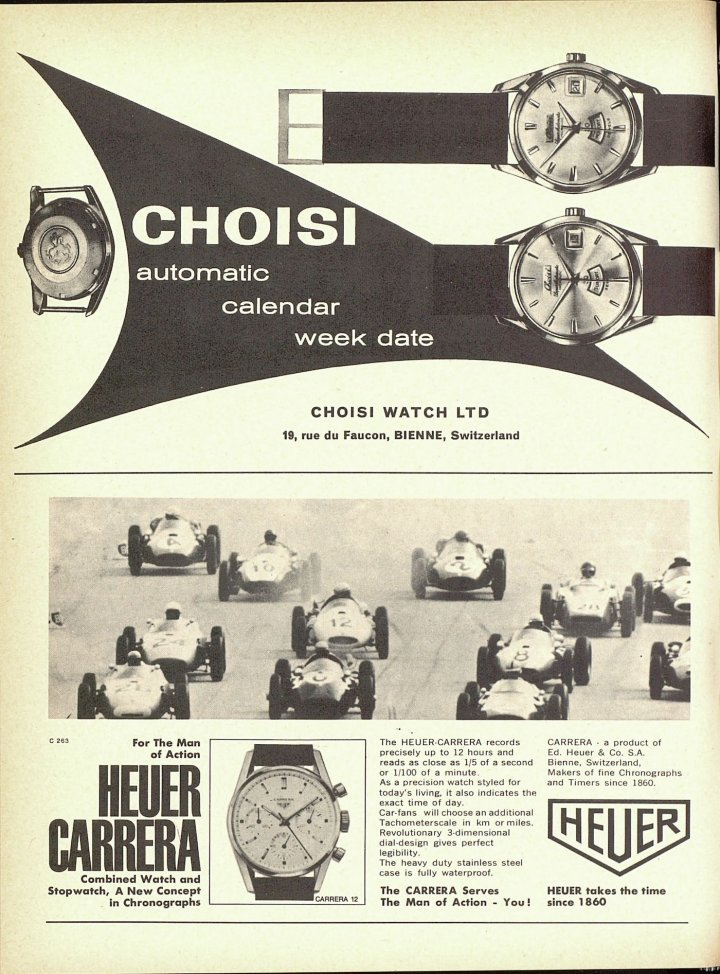 The launch of the Carrera in 1963 in Europa Star

The Carrera’s story has become a legend. Jack Heuer learned of Mexico’s dangerous and short-lived Carrera Panamericana road race in 1962 when he met the Rodríguez brothers at the 12 Hours of Sebring and was inspired to use the name for a wrist-worn chronograph.

Debuting in 1963, Jack’s Carrera captured the speed and adventure of the race, which ran for five years from 1950 to 1954. It also spoke to the aspirations of an ambitious, upwardly mobile young generation, with its round case, absolute legibility and its deliberate simplicity. In short, it was cool.

To pave the way for the year-long celebrations devoted to the Carrera’s 60th Anniversary, TAG Heuer’s design and engineering teams chose to return to one of the most collectible of all vintage Carreras, the reference 2447 SN of the late 1960s.

The first-generation Carrera model had a hand-wound Valjoux chronograph movement and either a silvered or black dial in a variety of configurations, sometimes with the addition of a scale around the dial periphery. At the end of the 1960s, a second series was added to the line-up with either a silvered dial and black subdials, or the other way around, known respectively as ‘panda’ and ‘reverse panda’. 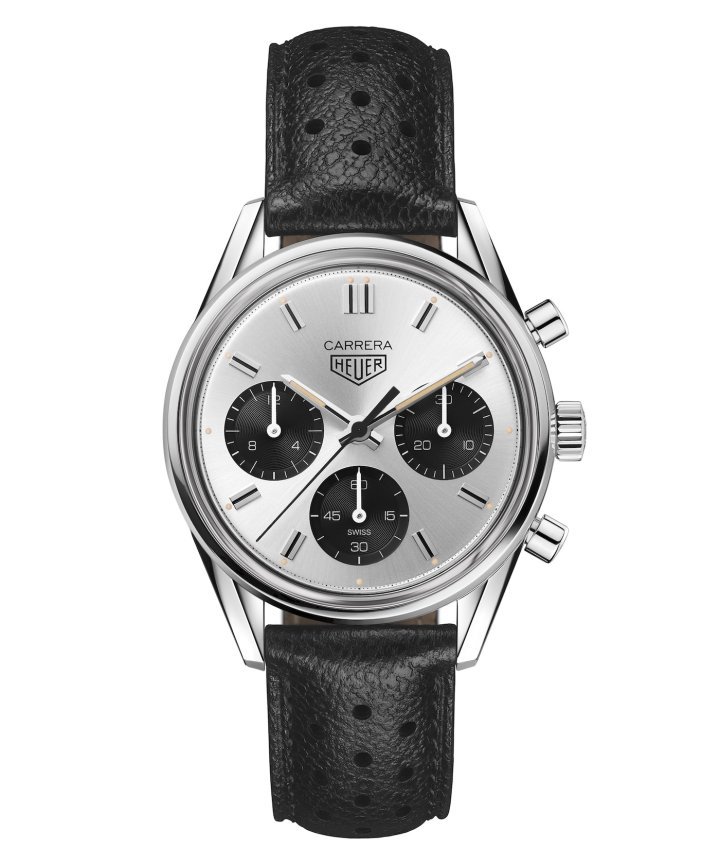 The 2447 SN had a silvered dial with black subdials – a panda – as noted in its nomenclature: ‘SN’ meant ‘silver’ and ‘noir’, or silver and black, a mix of English and French that still feels curious today. As ever, this expression of Jack’s design was driven by legibility. The vision behind the Carrera had been to create a racing instrument from which lap times could be easily recorded, with no room for distraction and absolute legibility from the high-contrast dial.

Building on the success of the earliest Carreras, the 2447 SN further improved readability at a glance with clever design touches. They included stripes down the hour markers to give them extra clarity, hour and minute hands with stripes down the centre for the same effect, double stops at 12 so it was clear when the chronograph was zeroed, and white hands and markings on the black counters to make them even more visible.

The TAG Heuer Carrera Chronograph 60th Anniversary fires up the ignition ahead of a year of Carrera 60th Anniversary celebrations. Limited to 600 pieces, it’s a faithful reinterpretation of the Carrera 2447 SN.

The colourways are lifted directly from vintage to new, including the black stripes down the central hands and hour markers, the double stops at 12, and of course the black counters with high-contrast white markings.

The vintage Heuer logo is in place, too, with the name Carrera above it on a silver sunray-brushed dial. Even the counter at 6 carries over the word ‘Swiss’, marking the watch’s Swiss Made status. In a game of spot the difference, some observers will note the 60-minute and 12-hour counters are reversed, as well as the subtraction of the T from the dial which designated radioactive tritium on the original watch. This has been replaced with contemporary Super-LumiNova on the new model.

Surrounding the dial is a 39mm polished steel case, topped by a raised profile ‘glass box’ in sapphire crystal, which, along with the vintage pushers, beige lume and slimline tension ring around the dial’s outer edge, gives the watch much of its retro look. 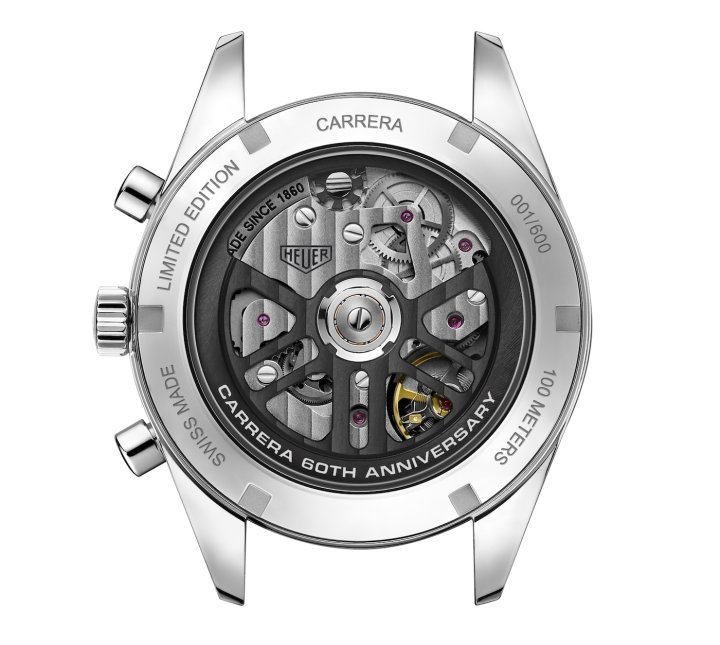 Also visible are the movement’s Geneva Stripes decoration, its column wheel - the device that makes the activation of a chronograph precise and satisfying and a special Carrera 60th Anniversary rotor.

The TAG Heuer Carrera Chronograph 60th Anniversary is the first entry in a season of releases planned to mark the 60th Anniversary of the Carrera. But its links back to the reference 2447 SN of the late 1960s will forever single it out as a watch for Heuer purists and collectors.