The so-called Swiss lever escapement has enjoyed an uninterrupted rein over mechanical watchmaking ever since it was first invented in 1757 by Thomas Mudge, who succeeded in adapting the classic lever escapement for portable watches. Just as this escapement was on the verge of being forgotten, Georges Auguste Leschot breathed new life into it in 1825. Ever since, its uninterrupted success was a major factor in the blossoming of the Swiss watchmaking industry. This success is because of its intrinsic qualities: it is robust, reliable, relatively easy to produce and allows high-precision adjustment, unlike some of its now defunct rivals such as the cylinder escapement, which was a lot less precise, or the detent escapement, which was too sensitive to shocks. (Read Paul O’Neil’s article about Urban Jürgensen for more on the rebirth of the detent escapement). 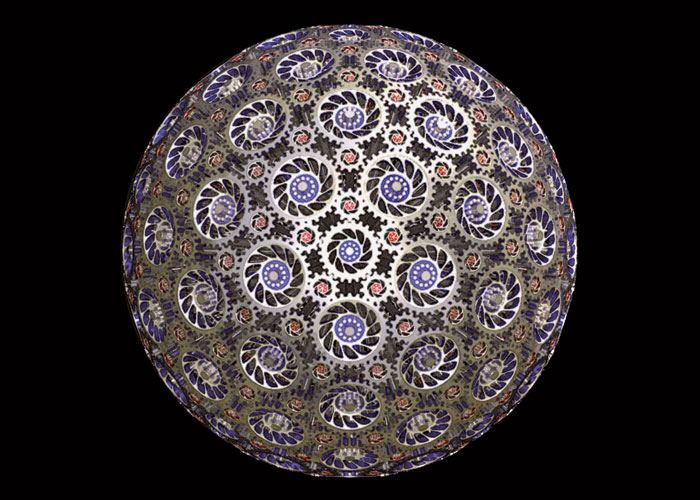 Here is a set of 242 interlocking bevel gears arranged to rotate freely along the surface of a sphere. This sphere is composed of 12 blue gears with 25 teeth each, 30 yellow gears with 30 teeth each, 60 orange gears with 14 teeth each, and 140 small red gears with 12 teeth each." – Paul Nylander, bugman123.com

The whirlwind surrounding the arrival of quartz technology was so strong that this mechanical regulator was for a second time nearly blown into oblivion. But, as we know, it emerged from the crisis stronger than ever and, with constant improvements to its performance, the Swiss lever escapement continues, some two centuries after it was first invented, to equip the vast majority of simple or prestige mechanical watches. The persistence of this ancient technology is itself a unique anomaly: apart from the bicycle, which other technology has lasted so long in spite of being scientifically outdated – at least in terms of chronometry? With mechanical watchmaking having stood the test of time and reasserted its dominant position in terms of prestige, the Swiss lever escapement continued its path, without anything (or hardly anything) threatening its primacy. In addition to its inherent advantages, the lever escapement has enjoyed such widespread adoption that it has also been able to benefit from huge industrialisation efforts and a streamlining of its production. And we know that, despite what we often think, industrialisation means better reliability.

But over the past few years, watchmakers have embarked upon a conceptual and economic race that has seen them look for other solutions for mechanical escapements that could either offer better results or set them apart from their competitors. So far, none of these innovative solutions has managed to put a noticeable dent in the supremacy of the lever escapement, the rare exception being Omega’s decision to develop for mass production the co-axial escapement invented by George Daniels (read the article by Paul O’Neil for more information on this).

One brand, however, stands out in this area: TAG Heuer. For a few years now, TAG Heuer has been committed to genuine scientific research to develop new and radically different escapements that allow the brand to go beyond the limits imposed by the Swiss lever escapement, in particular in the field of high frequencies that allow very short time intervals to be measured. (Read our article for more information).

But while TAG Heuer is the pioneer in this area, other brands are looking at new solutions, for example with the constant escapement – the lack of consistency in the lever escapement being one of its weaknesses – or even hybrid escapements. We devote the main contents of Europa Star’s annual “mechanical special” to these advances in escapement technology, as well as to new movements.