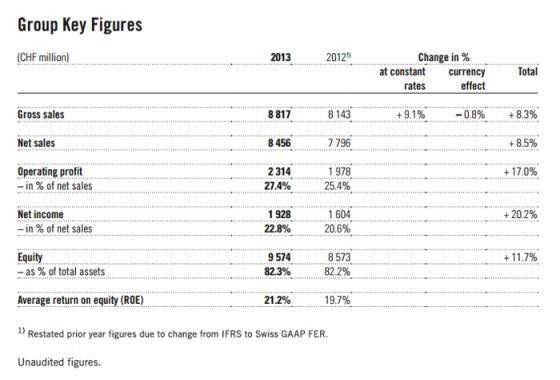 With its 20 brands, the worldwide leader in the watch sector grew by a further 8.3%, generating record sales of CHF 8 817 million in 2013, despite the extremely adverse currency situation. Group net sales even rose 8.5% to CHF 8 456 million. The major growth factors were the strong brands and the extensive distribution and retail network. The ongoing over-valuation of the Swiss franc, particularly against the USD and JPY, negatively impacted Group results versus 2012. In the second half of the year, the negative effect on sales due to exchange rates was over CHF 100 million.

Watches & Jewelry generated a sales growth of over 10%. Including production, gross sales in the aforementioned segment increased 8.6% to CHF 8 532 million and net sales 8.8% to CHF 8 173 million. In comparison, exports of wrist watches by the entire Swiss Watch Industry increased 1.8% to the end of November 2013. This indicates a significant increase in market share by the Swatch Group.

The Harry Winston brand was taken over early in the year and, together with its global workforce of 535 at the time and its Geneva production company, was integrated into the Group. At the end of November, the Swatch Group also took control of Rivoli Investment LLC, a corporation with a distribution network of more than 360 retail stores in the Middle East. Specific investment enabled production capacities to be expanded further and put into operation. Furthermore, the new watch-dial plant in Grenchen, the component plant in Villeret and component production facilities in Boncourt started operations early in the year, once again confirming the Group’s commitment to the Swiss manufacturing location and a further strengthening of “Swiss Made”. More than 900 jobs for the Group were created in Switzerland alone.

Operating profit increased 17.0% to CHF 2 314 million in 2013, corresponding to an operating margin of 27.4%. The effect on operating margin related to the over CHF 400 million compensation from the legal case success against Tiffany & Co. USA, after depreciation of inventory and impairment of other assets, accounts for approximately 3 margin points. Overall, net income was CHF 1 928 million, which corresponds to a 22.8% net return on sales.

By the end of December 2013, equity reached a new high of CHF 9 574 million, equivalent to an equity ratio of 82.3%. In particular, it should be noted that Swatch Group, in accordance with Swiss GAAP FER, removed all goodwill from its assets and deducted it from its equity. Any potential future impairment risk on goodwill has therefore been removed from the balance sheet. The Group has an extremely solid financial and equity base. Operating cash flow increased 31% to CHF 1.3 billion in 2013. As a result, cash and marketable securities reached more than CHF 1.2 billion at the end of December 2013. Due to payments for December sales and the compensation realized from Tiffany & Co. USA, cash and marketable securities increased to more than CHF 1.8 billion by the end of January 2014. This brings them to practically the same level as before the takeovers of Harry Winston and Rivoli and annual investment of almost CHF 700 million in machinery, installations, production infrastructure and retail stores.

All brands had an auspicious start. In the first month of the year, sales of both watches and jewelry were very good. After four years of strong and dynamic growth by Swatch Group, as well as the entire Swiss watch industry, continued healthy growth is expected in 2014.

Thanks to its 20 strong brands and their attractive products, further expansion of the distribution and retail network, the investment made in almost all production areas as well as an extremely healthy equity and financial situation, the Swatch Group is in an excellent position for both the future and for long-term growth.