Available as of today, the new unisex release evolves the Louis Vuitton line of connected watches with new features and more options for personalization.

Available as of today, the new unisex release evolves the Louis Vuitton line of connected watches with new features and more options for personalization.

For luxury brands, the question of wearable technology is a bit of a sensitive issue. That’s especially the case in the watch market, where high-end and sophisticated brands are incentivized to integrate connected technology into their products.

But the reality is, while today’s leading connected watches look decent, they’re not necessarily the most elegant of fashion accessories. But Louis Vuitton seems to be on the case with its connected watch, the Tambour Horizon, which took the standard Tambour line to the new age.

First released in 2017, the newest edition is the Tambour Horizon Monogram White, and it’s clear that for Louis Vuitton the aesthetics of its watches are non-negotiable. 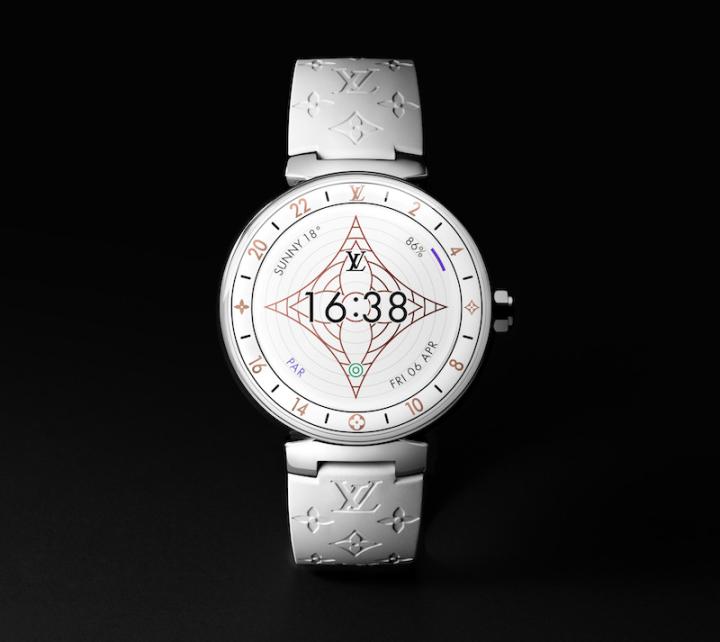 The unisex watch comes with several dial options, including the three-flower Monogram or the Damier motif. Given that this is a travel watch, the name of a major city and the local time can be displayed in a different color on the dial.

The watch also features an exclusive City Guide feature that connects the Tambour Horizon smartwatch with the top must-see places to visit in major global cities. The smart geo-localization displays nearby hotels, restaurants, bars, etc. that helps making traveling to a new city a bit easier - essentially the app is meant to stand in for something like a concierge service.

The Swiss-made stainless steel case of the Tambour Horizon is also more sleek than many of its connected counterparts, measuring in at 42mm in diameter. The competition is usually in the mid-40mm range. 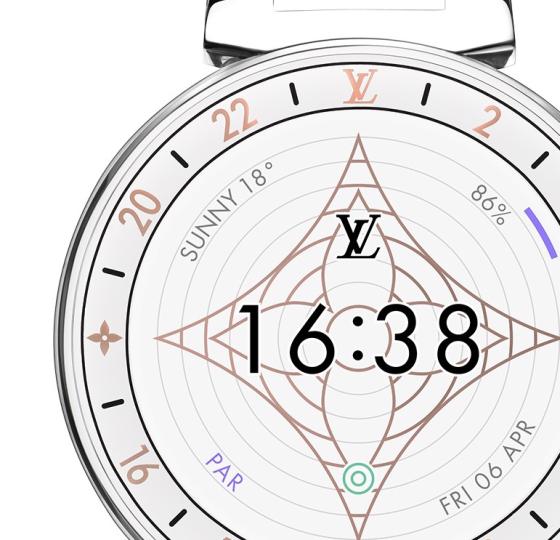 The range now offers a few more “feminine options” including a white strap. It can also be customized with a white ring around the rim of the dial for a more feminine look.

Other new dial options include two inspired by Nicolas Ghesquière’s 2018 Cruise Collection fashion show - two very colorful Kabuki masks, each featured in the center of the dial. As an added fun detail, when the Tambour Horizon watch is in active mode, the eyes of the Kabuki mask come alive and look around, while in ambient mode the eyes close and the mask goes to sleep.

The watch is powered by software and hardware provided by Google and Qualcomm Technology, allowing the watch to do a lot of the basic smartwatch functions. 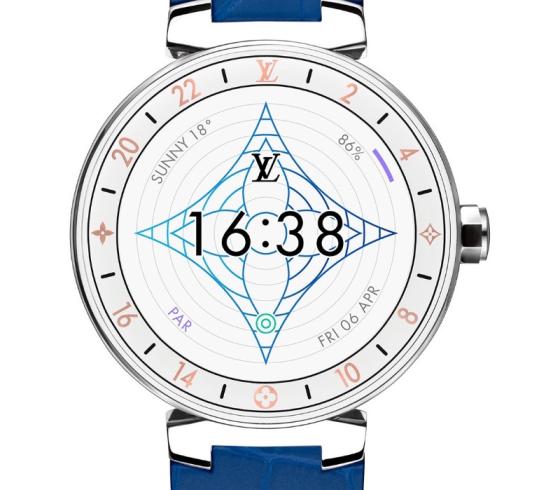 Importantly, this watch also works in China thanks to the brand’s arrangements with platforms like Weibo. Clearly this is important for Louis Vuitton given the size and potential of the Chinese market. That also explains the Tambour Horizon’s 12 new dial options to celebrate Chinese New Year.

Despite its great looks and the regular updates available to its software, this watch nevertheless suffers from the same problems facing other connected watches. After a few updates and a few years have passed, any given connected watch will be rendered obsolete by the newest release.

Spending a few thousand Swiss francs every few years on a new luxury connected watch like this is a luxury indeed. While it’s reasonable to expect consumers to spend a few hundred Swiss francs for a fashion connected watch – like those from Apple or Samsung – this Louis Vuitton offering seems like a bit of an overstretch for the average consumer. Alas, that’s not the point here.