Panerai and the historic Radiomir


Already renowned for its production of advanced technical high-precision instruments for the Royal Italian Navy, Guido Panerai & Figlio, which subsequently became ‘Officine Panerai’, created the first prototype of a new design of watch in 1936. Using a Rolex movement, it was designed for a special military group that was being formed in Italy.

Panerai and the historic Radiomir

Already renowned for its production of advanced technical high-precision instruments for the Royal Italian Navy, Guido Panerai & Figlio, which subsequently became ‘Officine Panerai’, created the first prototype of a new design of watch in 1936. Using a Rolex movement, it was designed for a special military group that was being formed in Italy.

Officine Panerai’s highly specialized production irrevocably connected its name with the marine environment. The products, developed to standards of quality and reliability superior to the norm for military use, included luminous mechanical calculators for launching torpedoes, aiming devices, depth gauges, compasses, and time fuses for mines or underwater primers. It was as a result of the technology acquired in these fields that Panerai was able to create an extraordinary specialist underwater watch. 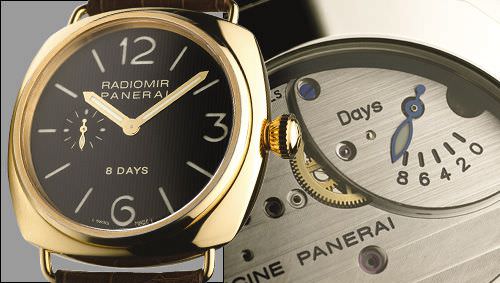 
Radiomir joins the navy
Panerai Radiomir watches entered permanent and effective service in the Royal Italian Navy in 1938; they also entered the pages of history as participants in some legendary exploits. Commandos and Gamma forces wore them when they perpetrated some of the most audacious attacks on the ships of enemy navies by approaching their targets either by swimming, or on board special torpedoes known as ‘pigs’.
The most sensational attack took place at the end of 1941 in the port of Alexandria, Egypt, when six commandos put two battleships and a naval tanker of the British Mediterranean fleet out of action. The hero of this mission was Lieutenant Luigi Durand De La Penne. He was captured, but a few minutes before the charge he had placed was about to go off, he told the English captain that the ship should be evacuated so that its crew would be saved. At the pre-arranged hour the Valiant was blown up with De La Penne and his number two shut in the hold. The two Italians survived and De La Penne, recommended for the gold medal of honour by his enemy, was described in the words of the British admiral as “the deliverer of the greatest blow that a single man has ever inflicted on a fleet.”
With the end of hostilities, the few hundred pieces of the Radiomir Panerai which had been produced, became highly prized rarities and were sought after by watch enthusiasts all over the world.

The Luminor comes aboard
In the early 1950s, the Radiomir Panerai was first joined and then replaced by the Panerai Luminor, a model which preserved the same case shape and historic watch dial (described later) but had some significant improvements. The water-resistance was finally perfected by the adoption of a special lever device that kept the winding crown pressed against the case, while the main movement used was an Angelus calibre with 8-day winding reserve, which greatly reduced the frequency with which the crown had to be used, thus minimizing the chance of any water entering the case. This characteristic device for locking the crown has always been a distinctive and unique feature of the Panerai watches and is actually a Trade Mark of the brand.
In 1993, Officine Panerai re-issued the celebrated original Panerai Luminor in a limited edition (and as an even more limited edition, a platinum version of the very first Radiomir Panerai). It also put the Panerai Mare Nostrum into production, a watch designed in 1943 but never produced, that had been intended for use by deck officers in the Italian navy. This chronograph with two counters and a water-resistant case proved to be a considerable achievement since it brought together highly skilled technicians from the upper echelons of Swiss watchmaking and Italian design. The result is an unrivalled range of watches constructed and tested to resist extreme conditions of use.

The Panerai Radiomir
The qualities demanded of the Panerai Radiomir were robustness, water-resistance and the highest legibility under all conditions of use. In 1938 Panerai presented a prototype with a cushion-shaped case of generous size (47 mm in diameter), with wire loop lugs soldered to the case-band (the central section of the case), a screw-down case back and a winding crown sealed in the same way. The hand-wound movement was 16 lignes (equivalent to a little over 36 mm), a diameter typical of calibres produced for pocket-watches. The movement, back and crown were marked Rolex, confirming the established cooperation which Panerai had with the Geneva-based brand. Other notable details were the crystal made of Perspex, a highly transparent material with excellent resistance to atmospheric agents and acids, a dial with hour markers, Arabic numerals and Roman figures coated with luminous material, and finally, the strap, a belt-like leather strap capable of resisting water, and long enough for the timepiece to be strapped on directly over the wet suit of the commandos.
From the prototype, the watch moved to small series production for which some significant modifications were carried out to some elements of the case and, in particular, the dial. The report from the units that had experimented with examples during the prototype stage, indicated that the difficulty of reading the time was one of the most critical aspects of the watch. The new version used a ‘sandwich construction’ dial, consisting of an upper disc in black with perforated hour markers and Arabic numerals at 3, 6, 9 and 12 o’clock, and a lower disc, with figures in relief, covered with a layer of a highly luminous radioactive substance that resulted in a high degree of luminosity. This feature of the watch was emphasized by the name adopted, Radiomir, which was inspired by the luminous paint devised by Panerai’s researchers, which consisted of zinc sulphide, radium bromide (from which the word Radiomir derives) and mesothorium.
More than 60 years have passed since these early examples and significant progress has been made in technical and technological fields. Officine Panerai created new cases and solutions for improving water-resistance, such as the patented bridge with lever device locking the winding crown, as well as using other watch calibres. Radiomir, a radioactive material patented by Panerai, was replaced by another Panerai patent, Luminor, a composition based on tritium. This in turn has been replaced and adopted for the more recent models by Super Luminova®. 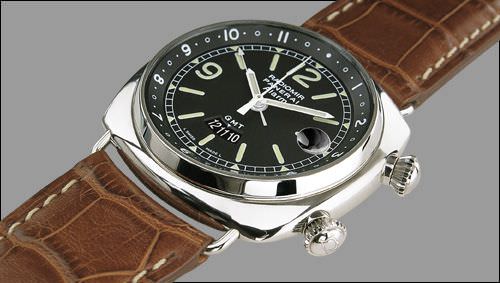 
Officine Panerai today
In the course of the 1990s another revolution took place. Panerai watches became cult objects among mechanical watch enthusiasts. Models inspired by the past, with volume and aesthetic details carefully represented and without the basic concept being altered, are much sought-after. The brand’s determination to offer reliable, highly prestigious watches hasn’t changed either. Radiomir and Luminor, names recalling the historic exploits of Panerai, have become the standard bearers of two ranges that introduced a new approach to the creation of sports watches.
The Radiomir collection takes the stylistic form of the 1938 watch, finding its greatest expression from 1997 onwards, with models that incorporate complicated and period movements with an inclination towards chronographs and produced in small series for collectors. This year, 2004, the Radiomir range includes: the Radiomir 45 mm Black Seal, the Radiomir 8 Days and the Radiomir GMT – all watches of particular fascination with special details which are invaluable in daily use.
The models belong to the Contemporary range, a choice underlining the desire to give further value to the stylistic forms used since the origins of Officine Panerai. Once again new versions of the classic ‘three spheres’ Radiomir Black Seal and the GMT are presented, while a wave of pure watchmaking emotion marks the Radiomir 8 Days, a model which retraces the choices made in the past by once more offering a calibre with a power reserve of 8 days, as the historic Angelus movement did in the 1940s.
Officine Panerai, acquired by the Richemont Group in 1998, continues to specialize in high-precision work and ultra-sophisticated mechanical devices. The company’s age-old history combined with its particular Italian design tradition, explains the unique personality of the brand’s watches. Panerai’s unique heritage of ideas, technology and enterprise remain an integral part of the history of Radiomir Panerai and Panerai Luminor.