The Master Tourbillon by Jaeger-LeCoultre, a ‘regulator’ that sets the record straight


The news was announced during the last SIHH and had the effect of a cold shower for some watchmakers: Jaeger-LeCoultre was getting ready to present a tourbillon in steel, at a price that defied all competition, selling for around 35,000 euros including taxes! “They want to kill the tourbillon,” declared some, undoubtedly fearing for the ‘goose that lays the golden egg’, which is basically what the tourbillon had become over the last few years, with prototypes and tourbillonesque ‘follies’ increasing at an exponential rate, both in terms of complexity and price.

The Master Tourbillon by Jaeger-LeCoultre, a ‘regulator’ that sets the record straight

The news was announced during the last SIHH and had the effect of a cold shower for some watchmakers: Jaeger-LeCoultre was getting ready to present a tourbillon in steel, at a price that defied all competition, selling for around 35,000 euros including taxes! “They want to kill the tourbillon,” declared some, undoubtedly fearing for the ‘goose that lays the golden egg’, which is basically what the tourbillon had become over the last few years, with prototypes and tourbillonesque ‘follies’ increasing at an exponential rate, both in terms of complexity and price.

When faced with these criticisms from a certain number of their colleagues in the industry, the management at Jaeger-LeCoultre remained firm. As Stéphane Belmont, the company’s Marketing Director, explains, Jaeger-LeCoultre has the decisive advantage of being a totally integrated manufacture, perfectly mastering all the industrialization processes of a product, as well as the savoir-faire and artisanal skills necessary for perfecting the finishing of a movement and a watch. “We can therefore offer a complex product like a tourbillon at lower prices because, having mastered the overall industrial and artisanal operations, we eliminate the additional costs of using external suppliers,” he says. “Our policy has always been to have a price positioning that exactly reflects the work accomplished on the product. We don’t artificially inflate prices or have surcharges simply because the product is a complication. Jaeger-LeCoultre has always proposed very fine watchmaking products at measured and justified price points. What bothers some people today is that we are now also presenting our tourbillon in steel! And, that we are returning to the roots of the tourbillon: the improvement of its precision and reliability.”
Indeed, in the folly of creating the most unusual tourbillon, people have, along the way, manifestly forgotten that this ‘complication’ was invented by Breguet with a totally timekeeping goal in mind: to improve the precision and functioning of (pocket) watches.

Legitimacy
In the midst of the many questionable timekeeping extravagances that have surfaced over the last few years, we can however mention several notable advances and a few memorable research endeavours in the domain of the tourbillon. Among them is the spherical Gyrotourbillon 1 from Jaeger-LeCoultre, presented in 2004 that made a really strong impression. Beyond its beauty and technical prowess, the Gyrotourbillon 1 is certainly one of the first, if not the first, tourbillon to be totally adapted to a wristwatch. Because of the rotation of its carriage, it compensates for the operational deviations in all positions, vertical and horizontal, that the watch is subjected to when being worn.
Yet, the legitimacy of Jaeger-LeCoultre in terms of the tourbillon dates back much farther. One of the historic tourbillons created by the brand is the Pocket Calibre 170, produced in 1948. This tourbillon, with three arms, enabled the brand to win many awards in chronometric competitions – events which used to govern the life of the Swiss watch industry. (We might mention in passing that many people long for the revival of these chronometric competitions, could be reserved, for example, for current tourbillons. If they were to be reinstated, this would undoubtedly result in many surprises.) Four and a half decades later, in 1993, the manu-facture integrated a tourbillon into the rectangular case and movement of a Reverso thereby creating, unless I am mistaken, the smallest tourbillon in the world.


Technical return to the tourbillon’s essence
Coming back to the essence of the tourbillon – improving operational precision – is therefore at the heart of Jaeger-LeCoultre’s new project, which has been aptly named Master Tourbillon ‘Régulateur à Tourbillon’, a good way to emphasize the return to precision.
But how were the engineers and watchmakers at Jaeger-LeCoultre able to succeed in achieving this precision and this reliability? The tourbillon, with its rotating carriage, is, as we know, a large consumer of energy. To get around this energy problem, two solutions are traditionally used: reduce the frequency of the movement and decrease the size of the carriage, and consequently the size of the balance there. The consequence however is a reduction in the working precision.
The watchmakers at Jaeger-LeCoultre opted for a different route. They wanted a large balance, entirely new, “with a size capable of delivering the energy required by an automatic movement to maintain the carriage in motion, and to ensure the 28,800 vibrations per hour characteristic of a high precision movement,” say the project managers. This high frequency balance (4 Hertz, rare for a tourbillon) has an inertia of 11.5 mg/cm2. (Most tourbillons have between 4 and 6 mg/cm2, which means low energy consumption but poor stability. In the case of Rolex, for example, the inertia of an automatic movement is about 16 mg/cm2, offering great stability but high-energy consumption). In this particular case of Jaeger-LeCoultre, the balance has variable inertia, which is adjusted using four screws mounted on the serge (the same for all balances found in Jaeger-LeCoultre’s automatic movements) whose pallet is straight, very compact and very lightweight.
In this same goal of optimizing energy consumption, the carriage was made with the lightest weight possible. Crafted in titanium, as is the escapement bridge, it is composed of 78 elements but weighs only 0.33 grams. This does not prevent it from being very robust, as is demonstrated by its resistance to the striker test. Three-dimensional, conceived thanks to its 3D design and simulation, not only on the horizontal plane but also on several planes, this carriage is also particularly well balanced (computer simulations allowed the highly precise determination of the position of the centre of gravity on the rotational axis of the carriage). This equilibrium is also helped by the utilization of a Breguet balance spring, which, beating concentrically, ensures good precision and allows better centring.

3D simulations
The same studies and research carried out by 3D simulation permitted the watchmakers to determine the precise shape of the barrel spring in the most optimal way to obtain a constant torque of the force transmitted from the large barrel to the balance. Optimal frequency and inertia, matched with a good working reserve and an automatic movement, come together to provide the best precision.
Still with a view to increasing precision, the 3D simulation was also used to confirm the shape of the gear teeth and the pivots of the balance in order to obtain the most regular levels of friction possible. In this same vein, after shaping the escapement wheel, the wheel’s rest and the impulsion planes of the teeth were delicately rounded and smoothed.
Finally, the automatic winding uses ceramic balls, which eliminate the need for lubrication and offer better winding performance. In the case of the Autotractor, for example, winding is done in only one direction (which seems to be more efficient for wristwatches).
In sum, the precision of the Régulateur à Tourbillon (as in all the Master series, it is subjected to the famous 1000 hours of tests carried out by Jaeger-LeCoultre) is of the order of -1 to +6 seconds per day, calculated on the finished watch, while in comparison, the COSC stipulates a precision of -4 to +6 seconds per day, determined on only the uncased movement. 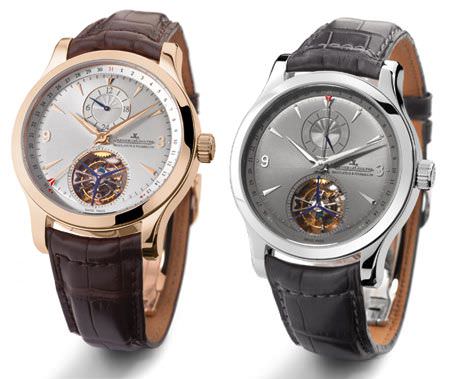 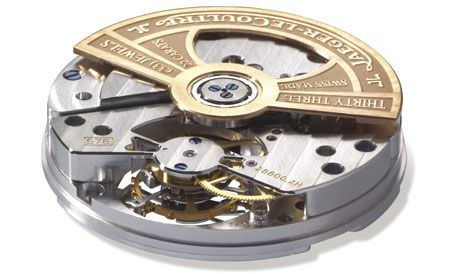 
Patented date indication
Jaeger-LeCoultre’s new Régulateur à Tourbil-lon is also intended to be a watch that has ‘useful’ functions. Its automatic movement, besides contributing to efficient winding, is especially practical to use. One useful function is a second time zone that revisits the home time/travel time principle already available in the Master family. The supplementary 24-hour counter, located in the upper part of the dial, can be used either as a second time zone or to maintain a reference time (home time).
The very original date indicator, which is corrected in both directions, is synchronized to the central hour and minute hands, and is displayed by a third central hand that ends in an inverted red arrow that designates one of the 31 numbers of the month that are placed around the dial. However, this hand passes in front of the tourbillon and would have partially hidden it during seven days (a subtlety as aesthetic as it is technical) if the brand’s watchmakers and designers had not developed a mechanism to allow the hand to jump the date scale which is interrupted at the number 15, placed at 5 o’clock, to regain its normal course at the number 16, placed at 7 o’clock. This date jump happens in three hours, starting at midnight, on the 15th of each month.
As for the seconds, they are displayed on the circular opening of the one minute tourbillon, with the aid of a hand with three arms, one of which ends in an arrow.
Presented in the classic case of the Master line, with a diameter of 41.5 mm, the Régulateur à Tourbillon is available in 950 platinum (Limited Edition of 300 pieces), in 18 carat rose gold or in steel, at prices that seem comparatively reasonable: 59,000 euros for the platinum version, 42,500 euros for the rose gold version and 35,000 euros in steel. All come on a mat alligator leather bracelet with folding buckle in white or pink 18 carat gold or in steel.

Industrialization and artisanal
Contrary to most tourbillons, the birth of the Tourbillon à Régulateur by Jaeger-LeCoultre was not the work of a small dedicated team, but rather the result of a joint effort calling on all the strengths and skills of the manufacture. This industrialization of the fabrication process, which guarantees exceptional product reliability is, nonetheless, completed by a very artisanal attention to the finishing details of both the movement and the casing, finishing that is both discreet and classic, as well as very refined such as chamfering, polishing, elongations, spiralling, engraving, Côtes de Genève pattern, delicate sandblasting, blued screws.
The very pure and classic design of the piece, with major consideration given to high readability, gives an especially transparent view of the tourbillon’s circular plays.
On the back of the watch, covered with a sapphire crystal, we can also see the monobloc oscillating weight in 22 carat gold, engraved in relief and decorated with openwork at its centre, giving a clear transversal view of the tourbillon carriage.

A new era
In its own way, the Master Tourbillon by Jaeger-LeCoultre inaugurates a new era for the tourbillon in general. It certainly ‘democratizes’ this specialty of haute horlogerie (a quite relative democratization, however, since its price makes it a very non-normal timepiece), but at the same time, it sets new standards in terms of reliability, precision, robustness, power reserve (48 hours) and water-resistance (50 metres), standards to which other tourbillons will be compared from now on.
In this sense, the Master Tourbillon fully contributes to the evolution of mechanical timekeeping.

Hand-indicated date synchronised with local time, changeable in both directions.

Hour and minute: Alpha in gilt or rhodium-plated brass, luminescent.

Date: gilt or rhodium-plated brass with a blue- or red-glaze double triangle.

1 crown to start the watch and set the local and reference time, minutes and date.

Sapphire-crystal base allowing the movement to be viewed.