Tudor, a strong repositioning and a return to its roots


Tudor, a strong repositioning and a return to its roots

The birth of Tudor dates back to 1946 when Hans Wilsdorf, the founder of Rolex, officially launched the company Montres Tudor SA. The name itself goes back to 1926, however, the year it was registered by the Swiss watch company, “Veuve de Philippe Hüther,” on behalf of Hans Wilsdorf. A decade later, in 1936, Wilsdorf took it over for himself.
In March 1946, the company really began to expand, and Hans Wilsdorf’s announcement at that time demonstrated his reasoning, “For some years now, I have been considering the idea of making a watch that our agents could sell at a more modest price than our Rolex watches, and yet one that would attain the standards of dependability for which Rolex is famous.”
Hans Wildorf, who had already entered watchmaking history with the Oyster and the Perpetual, thus foreshadowed the commercial strategies that would be put into place by so many groups and brands only decades later.
At that time, Rolex was already famous around the world for the quality and prestige of its production. With Tudor, the pioneering Hans Wilsdorf wanted to reach a larger audience with a quality product guaranteed by the ‘parent company’. With it, he wanted to offer advanced technology and functionality, good design, a distribution network around the world, and good after-sales service.

The evolution of the Tudor logo over the last few decades perfectly illustrates the brand’s journey. From the beginning, in the 1920s and 1930s, only the name Tudor appeared on the logo, the name of the famous dynasty that long reigned in England. Around 1936, the logo took on the emblematic rose of the Tudors shown on a shield. This was a way to symbolize the two poles of the brand—the style and elegance of the rose, combined with the strength and the ‘technical nature’ of the shield.
Starting in 1947, one year after the launch of Montres Tudor SA, only the rose appeared on the dials, thus showing, above all, the brand’s elegant style. Finally, in 1969, the brand came out with a number of technical pieces and the rose disappeared in favour of only the shield, emphasizing the notions of resistance and reliability. Today, this same shield has been stylized and given its letters of nobility, resembling more a coat of arms, as it decorates the dial of the new Tudor watches.

“Punished without mercy”
No sooner said than done—the following year, in 1947, Tudor launched the Tudor Oyster. In 1952, it was followed by the Tudor Oyster Prince line. As the ‘Oyster’ name indicates, the first Tudor timepieces offered major technical advances, and the brand emphasized its close relationship with Rolex in its advertisements that featured the mention “Sponsored by Rolex”, under the Tudor logo.
But the focus of the brand’s communication distinguished itself by its clearly designated ‘target’. Its advertisements showed situations such as workers perched on a beam high atop a skyscraper, a motorcyclist on a small mountain road, or (rather surprising in today’s sensibilities) the image of a worker using a pneumatic drill. These images were accompanied by the slogan, “Punished without mercy! – Triumph of the new self-winding watch." Solidity, reliability and precision were thus strongly emphasized.

Tudor thus created a special place for itself in the symphony of brands and, over the years, would emphasize its identity and its particular style with a mix of technology and modernity combined in an elegant design. In 1952, after the participation of 30 Tudor Oyster Prince watches in a scientific expedition to North Greenland organized by the Royal Navy, the brand decided to expand the functional technology of its watches, notably by developing a professional diver’s watch, the Tudor Prince Submariner, that would be adopted by the American Navy between 1962 and 1964 and by the French Navy at the beginning of the 1970s (until 1984). Following this, came other remarkable models such as the Tudor Prince Date-Day and the particularly emblematic Tudor Oysterdate Chronograph that was introduced in 1970.
The following decades were marked by the overwhelming quartz revolution and crisis as well as an explosion in the number of new brands coming from all over. While Tudor presented some very interesting models, such as the Hydronaut in 1999, the brand began to see its singularity wane little by little. Yet during this period, Tudor still remained quite strong in certain markets—markets that were ignored by other brands, such as the immense Chinese mainland (its early presence in China has allowed it today to benefit from more than 300 points of sale and 25 same-name boutiques in this country alone) and its image also endured in many other of the world’s regions.

Return to its founding identity
In 2009, management took things seriously into hand, if we might use this expression, and Tudor was strongly repositioned and reorganized. It received new products, a new marketing strategy and new collaborations such as Porsche Motorsport, which anchors the brand in the world of car racing, technology and style. It also adopted a new slogan: ‘Designed for Performance. Engineered for Elegance’.
While revisiting its offer, Tudor has also revisited the values of its past in search of its founding identity. It wanted to find “the subtle balance between performance and elegance,” as summed up by Tudor’s managers. In other words, this new adventure is about reaffirming the technical qualities, reliability and robustness of a watch that would “attain the highest standards of dependability” to evoke Hans Wilsdorf’s words in 1946. And in accordance with its legitimacy, Tudor now expresses this technology while not departing from its natural elegance. Quite naturally, this return to its roots is accompanied by a change in its public. Tudor now targets a clientele that is young and urban, those who appreciate a sporty look and design, those who want to express themselves with style but without ostentation.
So, it is in this spirit that the new models and collections of Tudor have been designed. They have transcended the utilitarian to provide products that are as performing as they are emotional.

A clearly designed offer
Tudor’s new offer is made up of three main collections: the sports watch with the Heritage, Grantour and Hydronaut models; the more glamorous Glamour timepieces; and the range of Classique watches.

Among these new models, the Heritage line is undoubtedly one of the most emblematic of the current revival of Tudor. The first breath of fresh air came with the new Hydro 1200, introduced in 2009—a very technical watch, which is water-resistant to 1200 metres and comes with a helium valve. The same year, the Grantour was to follow with its inspiration from the cars of the Grand Tourisme and its partnership with Porsche Motorsport that sports a black lacquered steel bezel reminiscent of a dashboard and a strap in perforated leather.
The recent Tudor Heritage Chrono is the latest addition to the Tudor range and revisits the history of the brand throughout its design. Inspired by the legendary Tudor Oysterdate from the 1970s, this automatic chronograph has been meticulously reworked right down to the slightest detail. Its size has changed, passing from the original 40 mm model to 42 mm for the current watch. Its design, while it conserves the essential ergonomic and sporty lines of the original piece, has been subtly retouched. The face remains perfectly recognizable: grey, black or black and grey dial; orange details; pentagonal white indexes modified to emphasize the three-dimensional effect. The central crown has been given protection, and the sides of the rotating bezel and the crown have been delicately knurled. The attaches of the bracelet have been totally redesigned to let the Tudor Heritage Chrono slip onto the wrist with either a steel bracelet with a safety clasp or with a new fabric strap, woven in black, grey and orange bands, whose clasp has been directly inspired from the safety belts of the epoch. 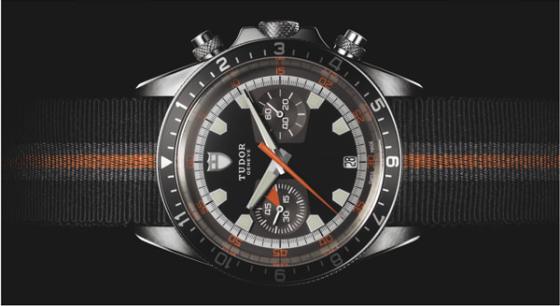 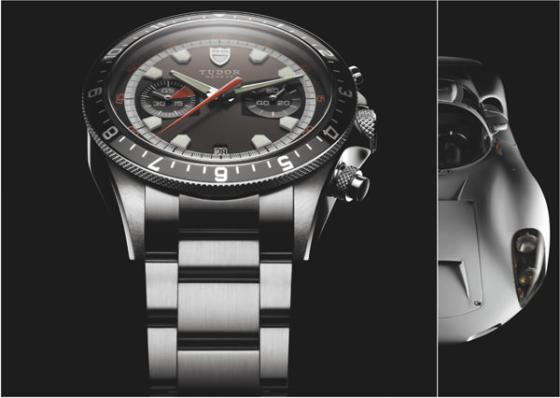 The consistency of this new strategy—to delve into the brand’s roots to better revitalize the brand—is strengthened even more by the new lines of the Glamour range, introduced last year, particularly those of the Tudor Glamour Date and Tudor Glamour Double-Date models. In this case, it has not been the 1970s, but rather the 1960s that have been revisited. Characterized by a double bezel on two levels, classic circular guilloché dials, a small seconds counter delicately decorated with the stylized Tudor rose, hollowed out leaf hands, date in a double window and domed sapphire crystal, the many variations of these elegant 42 mm masculine watches are water-resistant to 100 metres and are equipped with automatic mechanical movements. 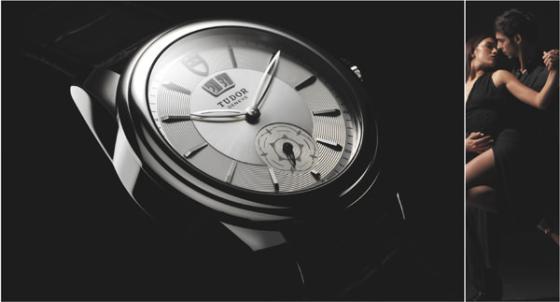 For the long term
This intensive reworking of the Tudor offer and the brand’s clearly defined and affirmed repositioning is supported by a definite competitiveness in terms of price, which ranges from €1,000 to €3,000 depending on the model and its material (all Tudor watches are 100 per cent mechanical and available in stainless steel or in bi-colour models). This means an exceptional price/quality ratio for the ‘Premium’ watch segment where Tudor is situated. Because of its association with Rolex, Tudor can offer its clientele a wide network to provide quality and efficient after-sales services, guaranteed for the very long term.
With a vigorously affirmed repositioning in this new environment and a return to its historic roots allowing it to create a revisited offer in a very contemporary spirit, Tudor has given itself the means to reoccupy a very singular place. Following the recent economic crisis, the consumer has become more attentive to the various offers available in the marketplace and is more sensitive to long term viability and quality, thus Tudor’s timepieces should receive a warm reception.