For your amusement and probable bemusement, I’m going to regale you with a tale akin to that of David and Goliath, a tale of woe, malice and such unsportsmanlike behaviour that, if the staunchest fans had known, Goliath may well have been banished from the hallowed playing fields of BaselWorld. So, if you’re sitting comfortably and have your slingshot and stone at the ready, I’ll begin.

Once upon a time, 2006 actually, Jean-Pierre Lutgen, a Belgian entrepreneur, founded Ice-Watch with the aim of marketing a stylish fashion watch that would be colourful and affordable. The concept has been so successful that in a mere six years, the eye-catching collections have sold around 10 million watches in 110 countries via more than 12,000 sales outlets. 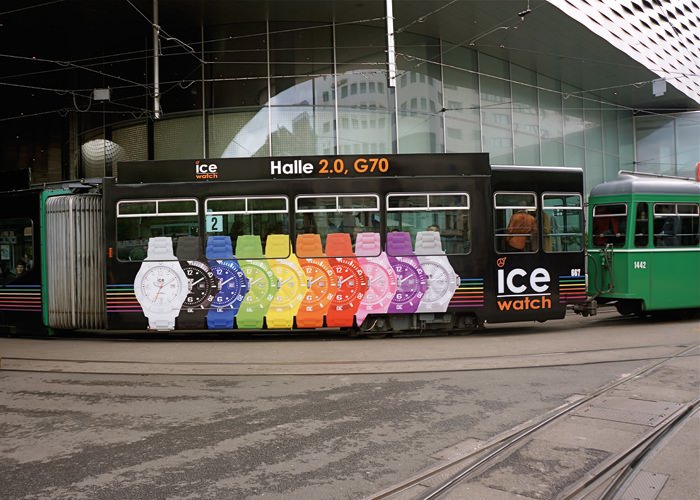 An Ice-Watch tram in Basel

Ice-Watch had sold tens of thousands of watches prior to its first outing at BaselWorld in 2009, then that year’s sales figures increased dramatically to a few hundred thousand watches. The following year saw the numbers climb into the stratosphere: 2010 – 1.6 million watches; 2011 – 3.7 million; 2012 - 4.3 million and that in spite of around 5 million fakes being produced and shipped from China to markets such as the Middle East, Asia, Africa and Latin America where the Ice-Watch trademark cannot be registered because of legal objections made by the Swatch Group. You need a law degree to understand the objections, but here, as I understand it, is the sequence of events that led up to them: in December 2006, the ‘icewatch’ trademark was applied for within the EU; in August 2007 Swatch introduced an opposition procedure; in November 2007 the Swatch Group made an application for iSwatch in Switzerland (say it out loud and you’ll understand the problem); in May 2008 the two brands signed a coexistence agreement whereby Ice-Watch had to separate the Ice and Watch by a bar between the two words and had to include a logo; March 2009 Ice-Watch participated at BaselWorld for the first time; in June 2009, Swatch sent a letter to terminate the coexistence agreement; starting in January 2010 Swatch started to file oppositions against various trademark applications worldwide and there are now 80 administrative proceedings pending.

Oppositions have already been rejected in courts in various countries, nevertheless Swatch continued to file legal actions against Ice-Watch and its distributors invoking trademark violations and ‘unfair competition’ – I like that one especially. In July 2010, in order to validate the coexistence agreement that had been signed between the two companies, Ice-Watch filed a legal action against Swatch in Bern (as agreed in the coexistence agreement in case of a dispute). On April 28, 2011, the court rendered a decision in favour of Ice-Watch. In many countries and China in particular, trademark registration cannot be given if there are legal issues pending, consequently Chinese companies are manufacturing fake Ice-Watches and selling them to unscrupulous retailers and online outlets around the world. Despite the efforts of Ice-Watch and the seizure and destruction of 130,278 fake watches in 2012, very little can be done while the Swatch Group continues to cry ‘unfair competition’, all of which means the all-powerful Group are ensuring that millions of fake 50 – 99 euro watches effectively take business away from both their own products and those of Ice-Watch.

To add insult to injury, at this year’s BaselWorld Ice-Watch appeared to have been exiled to a corner of Hall 2 that was so far from the watch brands in Hall 1 that Ice-Watch took the unprecedented step of sending out a pretty blonde scout to try and guide lost and distraught visitors to their booth. The Basel public transport authorities on the other hand, didn’t take sides and allowed Ice-Watch to promote its colourful watches on the trams - although they rejected the idea of letting the trams drive clients directly to the stand.

I have already purchased four genuine Ice-Watches in a shop in Menton (two have already been stolen by knowledgeable burglars) so I know where my allegiance lies, but then you pays your money and takes your choice! For once, I’m not sure if you’ve got to laugh or cry, right?