For most watch brands, the US market has got to be an important one. If it's not the brand's biggest market, it has to be at least in the top five. America is a large, important and very difficult market to conquer. It's not enough to climb the mountain, which is difficult in and of itself, but a brand then has to stay there while other brands come along trying to knock them off and take their position. New brands are always being introduced, while existing brands try to maintain or increase market share.

The State of the US economy
The US economy seems to be relatively strong now that the elections are over and things have settled down some. Most brands and retailers are experiencing good sales and are happy with the way things are going. “Business has been fine - it's been very consistent and very steady and we were very pleased with 2004,” says Hank Edelman, President, Patek Philippe USA.
Retailers have been doing very well, also. “Business is good,” says Denis J. Boulle, President and owner, de Boulle (Dallas, Texas). “In general, the economy has rebounded. Our profits from last year almost doubled. Sales are strongest at the two extremes – the lower priced (US$500 - $20,000) segment was very strong, while the US $20,000 - $100,000 range was almost non existent, but watches priced US $100,000 and up were very strong.”
“Some days I talk to people and the market is fantastic, other days it's so-so,” says Stacie Orloff, President, Corum USA. “I think the market is still very powerful. As a consumer buying market, I think our consumers are definitely more savvy and more educated. The consumers are also well trained now with department stores and liquidators, they are very price conscious. I think the health of the American market is good.”

Distribution
In the US market, there are several levels of distribution, though the bread and butter of the watch industry is the independent retailer. Next up the ladder is the independent chain retailer, a retailer who has stores in several cities or maybe even states. Then, there are the jewellery chains that sell watches, and finally, department stores.
“We have a very small position in department stores, because they are very short term and we are long term,” explains Yann Gamard, President, Swatch Group US. “Our biggest customers are the independent retailers or the watch multiples. The second biggest is the jeweller multiples. The independents are important because they understand the Swiss watch industry, they can convey the message, they understand watches and they are the best ambassadors. At the independent retailer level, the staff is knowledgeable and motivated.”
Independent retailers take the time to train their people, really understand watches and do the best job selling watches. Department stores are a good way for companies to get the word out about a new watch or a new line, but fashions change so rapidly in department stores and many are forced to discount in order to make sales.
“The independent jeweller can work with their assortment day in and day out and the owner of the store is in a position to make decisions on that inventory on a daily basis,” says Ron Jackson, President, Girard-Perregaux North America. “In the larger retailers, chain stores and department stores, the people who are in the store are not authorized to make decisions on the assortment. It's very important to have the right merchandise in the right store at the right time.
”The independent jeweller is our strongest point of distribution right now, hands down,“Jackson continues.”About 20% of Girard-Perregaux's volume comes from products that retail for over $100,000, and these are stocked at independent retailers and sold by people with important positions in those retailers."
Tourneau, one of the fastest growing watch retail chains, has 26 stores in the USA and is growing steadily. “We have at least three more stores on the drawing board in 2005 and we plan to continue a growth pattern of three or four stores a year,” says Andrew J. Block, Senior Vice President of Marketing, Tourneau. “We opened Boston, Las Vegas and Washington DC in 2004. In 2005, we see further growth in Westchester, New York, Atlantic City and a couple of other markets. We bring a higher sense of the category to a market. Rising tides lift all ships, they say, and we go into a market and elevate the watch category.
”New York is a prime market, as is the west coast and the east coast,“Block adds.”In Las Vegas, we just opened an 18,000 square foot store called the Time Dome, and it's expected to do as well or better than the Time Machine (in New York City). The other strong markets are Florida, the Midwest, Chicago and Texas (where the Rolex is still called the 'Texas Timex')." 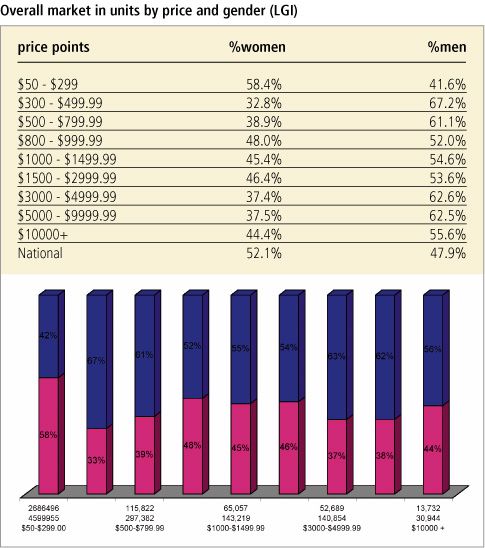 1. The state of the U.S economy, Distribution

2. American brands, The top brands in the U.S., The watch groups in America

3. Watch wardrobing, High-tech, The Internet, Counterfeiting and the grey market
Involving the customer