Portrait of a brand: DOXA
In 2004, the brand ‘Doxa’ celebrated its 100th anniversary of uninterrupted presence on the Romanian market. After 100 years of excellence, it was the occasion to remind people of some of the steps that have marked the brand’s century-long voyage. The anniversary celebrations were preceded by a large publicity campaign. More than 80 posters, billboards (mesh, city-light, backlit, etc.) attracted attention to the brand in Bucharest and 18 other cities throughout the nation. For the event, Doxa introduced its new luxury lines into the Romanian market with the Quadro and Style collections. A first for this market, the latest collection, Diamond, with hour markers using certified diamonds. 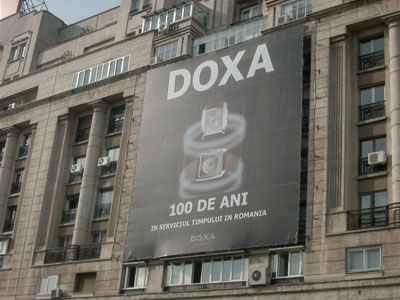 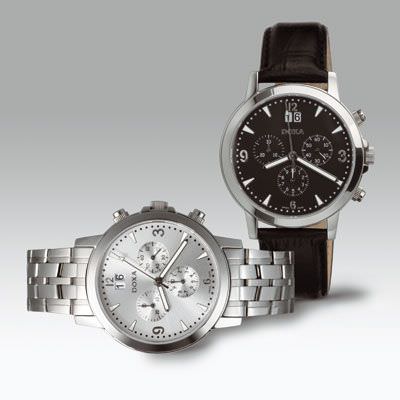 
The love story between Doxa and Romania dates back to 1902 when Prince George Valentin Bibescu (1880-1941), a great automobile sports fan, drove his Buick from Geneva to Bucharest in 73 hours and 45 minutes. Bibescu timed his journey using a Doxa pocket watch. He also indirectly determined his speed on several portions of the route using the trotteuse (central seconds hand) of the watch. The official entry of Doxa watches into the Romanian market occurred in 1904 when the first pocket watches were sold in Bucharest. They were part of a presentation prepared for the Universal Exhibition in Liège. The timekeepers featured engraved silver cases, one or two covers, and manual mechanical movements with a seconds hand. Many of these watches, still in perfect working order, are today on display in the Nicolae Simache Watch Museum in Ploiesti. Most of them have been worn by celebrities from the world of Romanian culture or politics. Other Doxa watches that can be admired in this museum are limited series pieces, which were stamped, for example, with a steam engine locomotive, a jockey or hunting scenes.
In 1905, the same Prince G. V. Bibescu used Doxa watches to time his diplomatic travels to Isfahan in Persia. In 1911, Doxa introduced its watches with eight-day movements, and nearly everywhere in the world, Doxa 8-Days were used by railway personnel as the time standard. The primary models that illustrate Doxa’s history sold very well in Romania. During the communist period, when the market was full of the Soviet brands Pobeda, Poljot and Vostok, Doxa watches became the standard for quality, destined especially for the people in power.
After the fall of the Soviet empire in 1989, Doxa conserved its position as a standard in Romania. In 1997, for example, the Technical Military Academy gave Doxa watches to the top students in its graduating classes, thus bringing back an old tradition for the academy. As an anecdote, in the Romanian language the expression ‘this guy has doxa’ means quite simply that he is very intelligent.
Doxa’s reputation and its hundred-year presence in Romania justify the slogan: “Doxa, a watch more precious than time.”

After the publication of the Market Focus on Romania in the last issue of Europa Star, we received the following additional information from the President/CEO of Top Holding conerning the Romanian watch market.