THE CALIBRE 38 FAMILY OF ETERNA

In looking at the birth of the new Calibre 38 or, more precisely, at the new Calibre 38 family, we note that Eterna is a brand selling about 25,000 watches a year and one that wants to offer its clients a large variety of in-house movements without, however, having to totally rethink from scratch each of its movements individually. Before the introduction of the Calibre 38, Eterna’s in-house movements accounted for approximately 15 to 20 per cent of its offer—4,000 to 5,000 movements—but this percentage should increase significantly starting with the launch of the Calibre 38 family.
The Calibre 38 has thus been revisited in a very clever and intelligent way, serving as a platform with a manual base, equipped with a flying barrel on ball bearings (the famous Spherodrive system created by Eterna), which, before the addition of the barrel bridge, is totally assembled, adjusted and regulated.
This platform or base can then take an im-pressive series of variations that can be very easily added.
With the simple addition of the barrel bridge, the Calibre 38 is thus transformed into the Calibre 3810, with three hands and small seconds at 9 o’clock.
With the addition of another module, it becomes the 3820, a calibre with three hands and small seconds at the centre. In the same way the 3821 has a calendar; the 3822 has a 24-hour hand for a second time zone; the 3823 becomes a calendar with date indicated by a central hand, etc.
The Calibre 3840, with small seconds, becomes an automatic movement by the simple addition of an automatic functioning system, while the Calibre 3850 is identical to it but with a seconds hand at the centre.
In all these cases, it is not a matter of adding plates but rather of integrations into the movement. On the other hand, the addition of plates will allow, by 2012 or 2013, the creation of the Calibre 3830, a manual chronograph, and the Calibre 3860, an automatic chronograph. In this rather amazing design, the base never changes, “not a single screw,” proudly declares Patrick Kury, Eterna’s Technical Director, who adds that “the modular systems are always added to the movement side,” the barrel bridge being “at their disposition” if we can call it that since “the flying barrel of the Spherodrive is already integrated into the base. Therefore, there is no need to change the plate for each adaptation. The basic movement does not move.” This design obviously offers great advantages in terms of production.
In addition, whether the manual or automatic version, this 30-mm movement—with its 5.9-mm thickness (manual) or 7.5-mm thickness (automatic, although this number is not definitive)—possesses a similar large power reserve. In the manual mode, it is 76 hours while in the automatic mode, the working reserve is 72 hours.

Four steps in the assembly of the two-barrel Calibre 3510

Flexibility and reactivity
As Patrick Schwarz (former Finance Director at Maurice Lacroix and CEO of Eterna since 2005) explains, “This particular design offers us great advantages in terms of competitiveness and reactivity. Thanks to its flexibility, our stock management is also greatly facilitated, since we can easily use different combinations. By producing basic movements, already ad-justed, I can strongly state that it is possible for us to react very quickly—whether in terms of functionality, the choice of manual or automatic modes, having a central seconds or small seconds hand—as a function of the precise demands coming from the markets. There is no need to produce pieces two years in advance that may become obsolete or out-of-date when they arrive at the stores.”
From an economic point of view, this design is also very advantageous since its modularity and flexibility can offer in-house movements well below the price generally demanded by the market. Patrick Schwarz understands the current attitude of the Swatch Group because “it is the only one to have invested in the technical and production tools, and we see the same ETA calibre sold at greatly differing prices. But the consumer, burned because of the crisis, is gradually becoming aware of this, even if he or she still prefers to buy a name and a face. Many brands are now forced to envision the production of movements that they earlier purchased as turn-key pieces. And behind these decisions, there is a strong economic reality. Investing in a movement costs a lot of money and takes a lot of time. It also taps into resources that would earlier have been devoted to communication. With the Calibre 38 and the Spherodrive, we have moved ahead of the others, and we are very happy about that.”
The official introduction of the first Calibre 38 is expected in 2011, although production is currently underway with some pre-series. [Editor’s note: we unfortunately cannot provide any illustrations since Eterna wants to save all communication for their launch.] 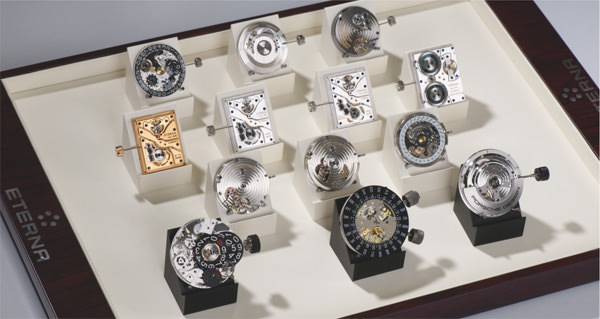 At the origins of ETA
Inside the Eterna manufacture, which employs approximately 75 people, is a team that is dedicated to this project. Most of the operations—design, construction, fabrication of ébauches, bridges and plates, industrialization and pre-assembly, assembly and encasing are done at this facility. On the other hand, milling, stamping and cutting are sub-contracted out. Nivarox supplies the assortment for this movement, which will be subject to COSC certification.
And then the question we invariably ask, “Is this movement reserved for Eterna or do you intend to sell it to third parties?” Patrick Schwarz answers candidly, “Over the next few years, it will be reserved for us, but after that, all options are open.” As we listen to his answer, we reflect on Eterna’s prestigious mechanical past, most notably its invention of the ball bearings for the oscillating weight in 1948 and its location in Granges (the same as ETA). It is worth remembering that ETA was born from the fusion of the group of Swiss ébauche makers (ASUAG) that Eterna joined in 1932, date at which its ébauche division was renamed ETA. In fact, ETA is the name that was historically engraved on the Eterna movements intended for outside use.