Tutima’s “hommage” as a symbol of its new ambitions


Tutima’s “hommage” as a symbol of its new ambitions

The Tutima brand has just presented the first totally German-made minute repeater, and never before realised in the city of Glashütte, where it recently re-established a new small manufacture. Its name is the “Tutima Hommage Minute Repeater”. Why and how did this brand, known above all for its aviator and sports watches, decide to launch into the creation of a watch as complicated and sophisticated as a minute repeater? To better understand the reasons, let’s take a few steps back to the year 1927.

A visionary
At the end of the First World War, Germany was in a full crisis situation. The watch industry based in Glashütte suffered dramatically and only Lange and one or two other brands were successful in staying afloat on the troubled waters. The DPUG cooperative (for Deutsche Präzisions-Uhrenfabrik Glashütte), which tried to regroup the surviving watch companies, was created in 1918, but in the mid-1920s, it went bankrupt. In 1927, the DPUG was taken over by a bank cooperative, which founded UROFA and UFAG and the then 26-year old Dr. Ernst Kurtz was appointed to manage UROFA.
Kurtz was a visionary. He decided to cease all production of pocket watches and to industrialise the profession. His strategy was to divide the activities into two parts. On one side, a company would produce the movements, while on the other side, another company would place them into the cases. Importantly, the brands began to commercialise this production with good quality watches that were also affordable in keeping with Kurtz’s vision.
The focus was therefore placed on precision and reliability, and quality standards were raised. Two basic movements were designed: the Calibre 58, a form movement called “Raumnutzwerk”, and the Calibre 59, a round movement that would give birth to the first completely German flyback chronograph, thus breaking the Swiss monopoly. Around 1935, among the other brands, Kurtz created Tutima (from the Latin tutus, tutissima, which means “protected”). Tutima was destined to receive the best of what came out of Glashütte, in particular the new Calibre UROFA 59. Tutima’s “Fliegerchronograph”, seen as the absolute reference in the domain of the pilot’s watch, would be produced in the quantity of 30,000 pieces, and would become the watch of the Luftwaffe. 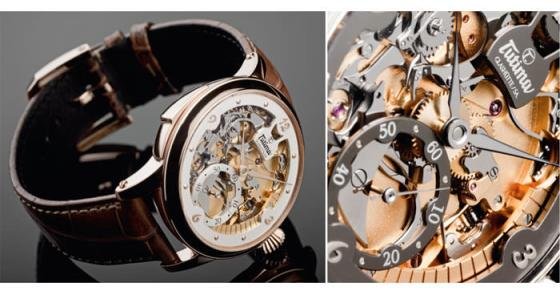 Tutima goes West
At the end of the Second World War, in 1945, Ernst Kurtz decided to relocate to the West ahead of the advancing Soviet army. (In fact, Kurtz earlier found himself in trouble with the Nazis because he had tried everything to keep his young watchmakers out of the army, and was imprisoned by the Gestapo for a brief time). His dream was to re-create “Glashütte”, first under his own name and then under the name of Tutima. But, despite the tens of millions of movements that he succeeded in producing in the following years, the affair collapsed and, in 1959, the banks forced him to close up shop.
In the early 1960s, a former employee named Dieter Delecate acquired Tutima, with the intention of remaking the brand’s famous pilot’s watch. To achieve his goal, he redesigned the timepiece and sold it on the professional market. At the beginning of the 1980s, it became the official watch of the Bundeswehr and of NATO.

Return to Glashütte
In 2005, Dieter Delecate—still at the head of Tutima today—decided to return partially to the place of the brand’s birth. A building was found and restored in Glashütte, and a master watchmaker named Rolf Lang was hired. A person of vast experience in watchmaking, Lang was also a former curator of the famous “Salon of Mathematics and Physics” at the baroque Zwinger Palace in Dresden, which houses some of the most important historical timekeepers in the world.
Delecate asked Lang to design a watch that would pay homage to the glorious past of Glashütte, in general, and to Dr. Kurtz, in particular. Since no entirely original minute repeater had ever been designed and produced in Glashütte (the minute repeater pocket watches coming out of Glashütte factories were made with Swiss component parts), the decision was made to try to make one. In 2007, several young watchmakers were hired and in 2011, the brand introduced the Tutima Hommage Minute Repeater. Twenty-five pieces of the Hommage line will be produced in all, of which 15 will have a plain dial and 10 will have a skeleton dial. The piece’s 550 component parts, including pallets, pallets wheel, barrel spring, etc., are all made in-house. The only exception is the balance spring.

Becoming the German sports brand
As Frank Müller (not to be confused with another famous man/brand of the same name), the former CEO of Glashütte Original and now a consultant for Tutima (Müller is also the designer of the wonderful German Watch Museum in Glashütte, requested in his time by Nicolas Hayek, since Glashütte Original is in the Swatch Group stable of brands. For more information on Glashütte Original, see the article in this issue by Timm Delfs), explains, “the Tutima Hommage Minute Repeater is an example of the brand’s watchmaking savoir-faire.”
This spectacular minute repeater, which will be followed by other important realisations, should not make one forget that Tutima’s goal is to essentially become “the reference in the area of German sports watches”. By “German”, it is clear that Tutima intends to fully return to its historical roots. After the present transition phase, the brand’s declared objective is, over time, to produce basic calibres that are 100-per cent Tutima. These will be affordable movements but of a high “Made in Germany” quality, with the intention of having them entirely made in Glashütte. Although the city’s industrial fabric was badly ravaged by the war, followed by the communist period, it is undergoing reconstruction.
Tutima’s goal, as bold and daring as it is, aligns closely with the history of Glashütte. From the beginning of the watchmaking industry in this Saxon valley, the aim has been to make true precision instruments that, as Dr. Kurtz showed in his time, combine quality and affordable prices. This is a challenge that Tutima, encouraged by its fully re-found watchmaking legitimacy, intends to fully master.